And I had no idea that there was a film of Atomic Sunrise in the works--can't wait to see that!

Options: Reply To This Message•Quote This Message
Re: Anita's friend?
Posted by: Cristiano Radtke ()
Date: February 25, 2017 18:30
Definitely looks like it's the same guy.

Quote
Voodookitten76
Thanks, mikehat. I suspect that this guy was more than a fan / spectator / hanger on as well.

And I had no idea that there was a film of Atomic Sunrise in the works--can't wait to see that!

Looks like this guy is a member of "The Living Theatre". Seems that the Stones inner circle (in the late 60's) knew some of these people. More pictures from the March 1970 Atomic Sunrise gathering: [mashable.com]

“Anita [Pallenberg] and I went to Rome that spring and summer [1967], between the bust and the trials, where Anita played in Barbarella, with Jane Fonda, directed by Jane’s husband Roger Vadim. Anita’s Roman world centered around the Living Theatre, the famous anarchist-pacifist troupe run by Judith Malina and Julian Beck, which had been around for years but was coming into its own in this period of activism and street demos. The Living Theatre was particularly insane, hard-core, its players often getting arrested on indecency charges—they had a play [“Paradise Now”] in which they recited lists of social taboos at the audience, for which they usually got a night in the slammer. Their main actor, a handsome black man named Rufus Collins, was a friend of Robert Fraser, and they were a part of the Andy Warhol and Gerard Malanga connection. And so it all went round in a little avant-garde elite, as often as not drawn together by a taste for drugs, of which the LT was a center. And drugs were not copious in those days. The Living Theatre was intense, but it had glamour. There were all those beautiful people attached, like Donyale Luna, who was the first famous black model in America, and Nico and all those girls who were hovering around. Donyale Luna was with one of the guys from the theater. Talk about a tiger, a leopard, one of the most sinuous chicks I’ve ever seen. Not that I tried or anything. She obviously had her own agenda. And all backlit by the beauty of Rome, which gave it an added intensity…” [arthurmag.com]

Tell us the interesting story of how you got your ear pierced.
Well, the cat who was doing it – a jeweler or he studied it – was on about 15 Mandrax. Very stoned. Doing it the good old-fashioned way. None of your anaesthetics and machinery. With a sewing needle and ice. Me next. Rubs the ice on and he's dodging back and forth. God knows how he managed to do it. And he just made it. It's right at the lobe.

I've always wanted a pierced ear. I made me first bottleneck and had me ear pierced the same night, with about 15 of the Living Theatre and I was about the fourth ear. He did Anita's too, at a special angle. By then he had another ten Mandrax and was completely out of it. Try it from the front. No, let's go at it from the back.

But a lot of people got their ear pierced that night, it was around the time of the Hyde Park concert.

I reached out to the Living Theatre on Facebook--attached the photo of Mystery Man. Also did some digging around about the Living theatre and it appears that there were a great many people who drifted in and out of that circle, so...it may still be a bit of a crap shoot, but still the new photo is a wonderful lead!

-swiss
Options: Reply To This Message•Quote This Message
Re: Anita's friend?
Posted by: ouroux58 ()
Date: February 26, 2017 21:55
15 pages looking for to know who is this guy who is on a same picture than Anita!!!!
And the Stones are still alive. I can't imagine the threads after they'll pass away to feed the forum.

I reached out to the Living Theatre on Facebook--attached the photo of Mystery Man. Also did some digging around about the Living theatre and it appears that there were a great many people who drifted in and out of that circle, so...it may still be a bit of a crap shoot, but still the new photo is a wonderful lead!

Yes +1, great work! I remember actually looking for the guy on some site with pics of the Living theatre in 2015(?). Should have posted whatever it was I found there (didnt find the mistery guy though). Didnt we discuss the Living theatre and some possible connection? No names?
Options: Reply To This Message•Quote This Message
Re: Anita's friend?
Posted by: Fillmore ()
Date: June 20, 2017 22:18
No news since February? What´s up, everybody?

It would be too easy to think that Mr Mystery looks like Gram Parsons on the cover of Grievous Angel, wouldn´t it? I just saw that record cover again - to me it is Gram.

Or have I simply missed the solution to this riddle…?
Options: Reply To This Message•Quote This Message
Re: Anita's friend?
Posted by: chatoyancy ()
Date: July 9, 2017 07:23
Someone said that Stash Kosslowski, a Stones friend from the sixties, was asked who he thought the mystery man with Anita in Hyde Park was. Stash said it looked like jeweler Dave Court, but Stash is wrong. Dave Courts does not look like that man. Dave is a jeweler who met Keith and Anita in 1968. He was invited to Keith's birthday party in 1978 where he surprised Keith with the skull ring he wears today. David Courts met Keith through Robert Fraser in London. Keith bought a skull and crossbones ring from Courts & Hackett in 1974, and Anita bought Keith a skull pin which had human hair and a gold tooth.

Dave Courts is not the man in the photo with Anita.

Edited 3 time(s). Last edit at 2017-07-10 01:11 by chatoyancy.
Options: Reply To This Message•Quote This Message
Re: Anita's friend?
Posted by: Rocky Dijon ()
Date: December 4, 2018 01:05
While we've narrowed down our grim-faced barbarian to The Living Theatre, it's worth noting for posterity that Ronnie Schneider has gone on the record stating he does not recognize the face either.

I'm pretty sure he was Frank Frazetta's model in the 1960s.

So it occurred to me that the easiest way to solve this four-year-old problem thread would be to put the image in a Google image search (that is, searching by pasting the image in the search box instead of typing text) and see what happens.

Google Image seems to think that DandelionPowderman was right all along, and it is indeed a young Richard Lloyd (the guitarist from Television). Thoughts? Richard Lloyd -- Everything Is Combustible …… page 228

ROCKMAN
Options: Reply To This Message•Quote This Message
Re: Anita's friend?
Posted by: DandelionPowderman ()
Date: December 4, 2018 10:47
LOL, I forgot that I even suggested it was Richard

Yeah, it looks like that was way premature..
Options: Reply To This Message•Quote This Message
Re: Anita's friend?
Posted by: Palace Revolution 2000 ()
Date: December 4, 2018 14:52
I used to see that guy around in Rome. I was still a little kid, and was scared of that whole crowd, but I know it was him; because there was always the knowledge that they ran with the rockn rollers. It was a group of drag queens that he hung with.

He sort of looks like Stan Lynch, the original Tom Petty drummer, doesn't he?

edit remembered some more: I'm pretty sure there was an apartment they stayed at that Maria Schneider (Last Tango in Paris) eventually took over with her girl-friend. I also recall that he used to shave his chest, and then forget to keep up with it, so it was always kind of growing in. 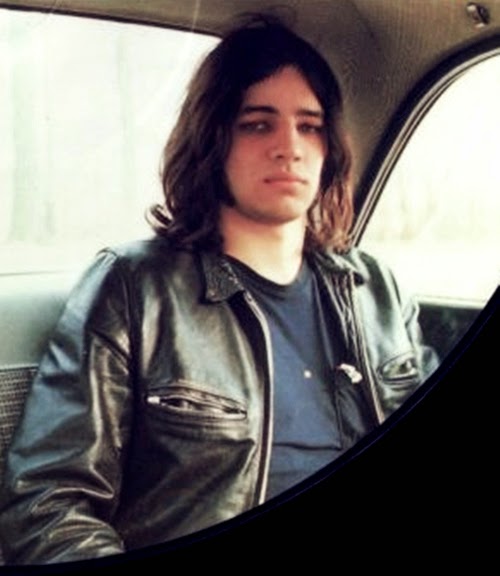 Quote
DandelionPowderman
Asheton has a big mouth. Our guy not so much..

I always thought he was the quietest one of the bunch...
Options: Reply To This Message•Quote This Message
Re: Anita's friend?
Posted by: DandelionPowderman ()
Date: December 4, 2018 22:46

Quote
DandelionPowderman
Asheton has a big mouth. Our guy not so much..

I always thought he was the quietest one of the bunch...

Options: Reply To This Message•Quote This Message
Re: Anita's friend?
Posted by: Voodookitten76 ()
Date: December 5, 2018 02:54
I guess Google needs to work on its image search algorithm some more.

Buried in his photos is another version of the photos posted on page 1 of this thread. The only difference is that Anitas friend is looking straight forward.

Not sure where Sam got the photo from , but there must have been quite a few shots similar. Could someone upload this photo for me. Perhaps Sam might know the source of the original photos. Interesting to note that in the URL address of the photo it has theater.