For pre- and post-show information and pictures see the special IORR Rio pages!

They simply lead the crowd to satisfaction!!

Stones are he best rock 'n roll band ever... well..everybody knows that, but whem you show this in a live concert for more tham a million people... well... It's a kind of special, isn't It?

The band started with the classica jumpin' Jack Flash a little bit nervous, but soon they get back to their way and in the third song we already know that the night will be special. You got me Rocking was, for me the extra-official (as somebody called in the review of the Puerto Rico show) start of the show.

Rain Fall Down, Midnight Rambler and Night Time is the Right Time were great!

I'd say that the B-stage's show must be longer. Is a great momento, with a cool interaction with the crowd and a special "small club" feeling.

The third part of the show was roll of rock 'n' roll classic songs... and It made the people lose their breath!! Honky Tonk Women, Sympathy For The Devil, Start Me Up, Bronw Sugar and You can't always get what you want and satisfation as encore was a set-list for definitly turn on the crowd and burned down the Copacabana Beach!!

I Hope they come back to our country again.

I arrived into Rio on the morning of the show. As my taxi crawled through the heavy traffic along the Avenida Atlantica I got the first glimpse of the massive stage and street bridge.It's not every day that Sugar Loaf is eclipsed. There are thousands of people on the beach and the party has already begun and it's not yet midday.

The vibe is quite different. This is more than the usual Stones pre concert good feel factor,it's fuelled by the samba and party culture that makes Rio. The hawkers in the street beat the Stones official merchandise hands down. A myriad of beautifully designed T shirts, wrist bands, earrings, bandanas, flags etc. Even the cans of beer have the Stones on. The restaurants have mouth and tongue shaped food and the beach sculpturers are kept busy. The epicentre has to be the Copacabana Palace Hotel. This is a true circus. Everybodys hanging out from the Brasilian Rolling Stones Church in their top hats and gowns to the leather and Harleys of the bikers from Sao Paulo.

Having met up with Bjornulf for a few beers, it was time to collect my press badge and head off to the VIP area. The Brasilian support band, whose name in English is the Titans, were the best support since JJ Geils. Well worth checking out. Good solid heavy rock, tinged with blues. They warmed up the crowd perfectly.

I was fortunate to see the boys walking across the street bridge to the stage. Within two minutes they were bellowing out Jumping Jack Flash. The audience of one and a quarter million were swept off their feet. Fans on hotel balconies are dancing away, helicopters are flying around, film cameras are everywhere and the party is in full swing!

Well the news is they pulled it off big time. The audience reaction for much of the concert reminded me of the audiences at gigs in Jamaica, incredibly chilled, almost laid back. It was like a heavy days partying had left everybody too tired for the climax. Yet the crowd loved the Stones no doubt about that. Their reaction changed when they played Start me up, and Mick said" Okay here we go", and everybody went crazy. It was just like Buenos Aires.

Highlights for me had to be Get off my cloud from the B stage. It sounded so fresh, exciting and revitalised. And Keef the Riff Master was on fine form. Great vocals on the new classic This place is empty. And we got Happy too.

Lisa did a fantastic job on Night time, and Ronnie's solo on UCAGWUW was the best I have ever heard.He was razor sharp and on top form.

Nice to have 4 songs from the new album. Rough Justice went down just great. Mick delighted the audience by wearing a Brasil T shirt for the final number Satisfaction. No fireworks to finish. We had seen enough with the spectacle infront of us. The final bow of the 4 guys. And Charlie in his green T shirt and brown jacket looked so cool as he politely waved to the fans. Then they were gone. Straight over the bridge back to the Hotel. Within a few hours Keef, Ronnie and Charlie were en route to Argentina. Mick remained in Rio with his son Lucas.

Rio was conquered! The Stones rocked Rio like no other band could. I think next weeks Carnaval will take second place to this event. This gig is already a milestone, and it ranks alongside Hyde Park and Altamont.

See you all in Buenos Aires! 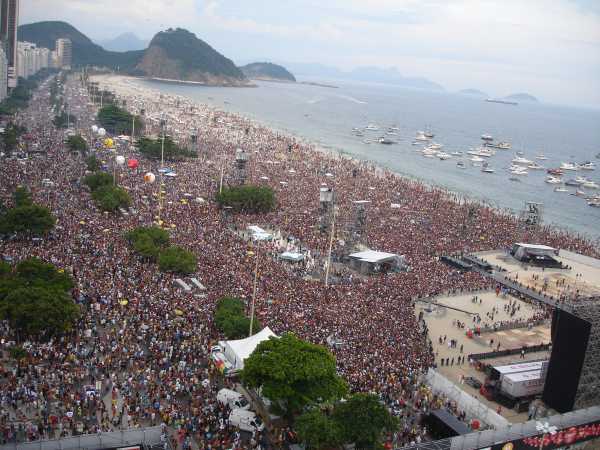 At 7pm just before the first warmup is on, the first million or so fans are on the beach and on the street. 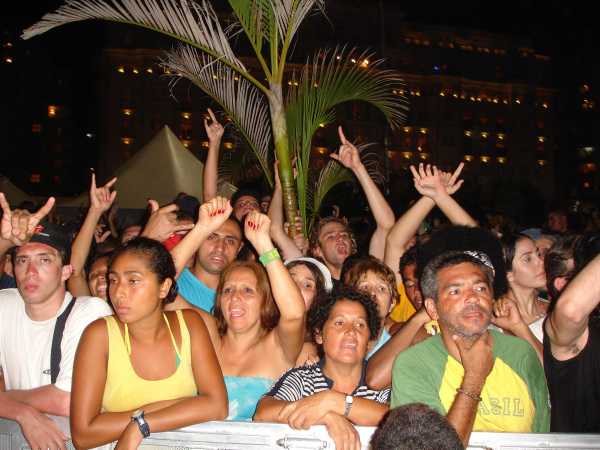