Goto Thread: Previous•Next
Goto: Forum List•Message List•New Topic•Search•Log In•***Print View
Goto Page: 12345Next
Current Page: 1 of 5
The best/funniest posts ever on IORR
Posted by: Chester ()
Date: July 2, 2015 18:01
What are the best and/or funniest posts you can remember on this site?

This one today from Roll73 made me laugh out loud.
It was on the thread about whether anyone would want to die at a Stones show.

"Jeez - whatever next? If you were to be killed by a Rolling Stone, which one would it be and how would they do it?

(Keith, with the Telecaster, in the library)."


Here was a recent post by someone about what songs should be dropped from the setlist.

SFTD: "Even the devil is tired of this one.''

Terrific.
Options: Reply To This Message•Quote This Message
Re: The best/funniest posts ever on IORR
Posted by: Naturalust ()
Date: July 2, 2015 18:08
"Great setlist!" always brings a smile to my face.

Word of the day!
Options: Reply To This Message•Quote This Message
Re: The best/funniest posts ever on IORR
Posted by: EddieByword ()
Date: July 2, 2015 20:32

Quote
SomeTorontoGirl
I just hope he tips me..

Or there was Gazza, who in response to a request for some Stones information said he "doesn't have all the answers!!!", or something like that. After his response, there were two pages of posts asking him all kinds of questions like "what is this weird spot on my thigh?" or "is there a loch ness monster?".

More recently, Onlystones' posts about attending club shows and living the rock and roll life that were later shown to be nonsense - those were hilarious.
Options: Reply To This Message•Quote This Message
Re: The best/funniest posts ever on IORR
Posted by: Naturalust ()
Date: July 2, 2015 21:37
Some of those Japanese interpreted Stones lyrics were pretty damn funny.

And this one posted years ago by an anonymous user:

Quote
SomeTorontoGirl
I just hope he tips me..

But I howled when I saw this. 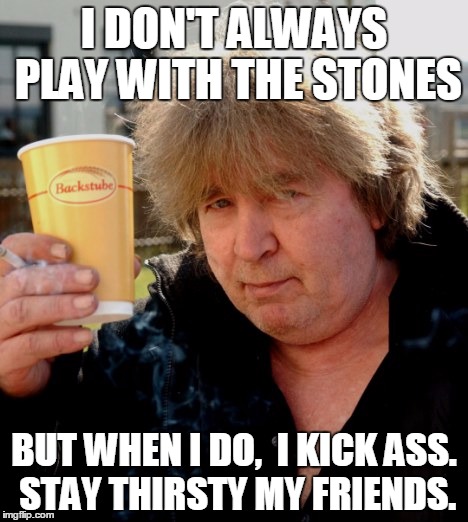 Quote
Stoneage
Maybe Stonestod (Stones death in German!) would be fried by all the yes-men, who are very much in command here, were he to return?
Humour or irony isn't well recieved by everyone these days. Many mistakes it for whining...

Options: Reply To This Message•Quote This Message
Re: The best/funniest posts ever on IORR
Posted by: HearMeKnockin ()
Date: July 3, 2015 00:25

Many others. Some very witty, funny, and absurd people here.
Options: Reply To This Message•Quote This Message
Re: The best/funniest posts ever on IORR
Posted by: swiss ()
Date: July 3, 2015 00:27

jinx! (actually you posted this as I was typing the very same thing -- I wasted 2 minutes searching for the link

)
Options: Reply To This Message•Quote This Message
Re: The best/funniest posts ever on IORR
Posted by: MisterDDDD ()
Date: July 3, 2015 00:28
The whole "onlystones" tall tale thread of bribing a non-existent head of the catering/banquet department at the Belly Up was pretty hilarious...

Quote
kate2
TO Only Stones...be sure to stay in the new, five star resort, just east of Del Mar off hwy 56, tonight. Also, go jogging or 'act like you are', at 630am. This is what I saw the lead singer doing in 2005.
There is most likely another private show, at a home, in Rancho Santa Fe, tomorrow night. The man tonight was just with HP..if you known anyone there. Also, he does Charity for McDonald House.

I will also post where I am every second of the time I am there. As well as which pocket I have my wallet in. No personal details. Too many crazies. I will tell about the experience. Its going to be awesome.

That said, I posted that I stayed in BH where they fell for the banana in the tail pipe trick when I went to LA.

When I go to SD I generally stay in LJ."

Quote
MisterDDDD
The whole "onlystones" tall tale thread of bribing a non-existent head of the catering/banquet department at the Belly Up was pretty hilarious...

Yes! Does anybody remember the Diaz Brothers? What happened to them?

Options: Reply To This Message•Quote This Message
Re: The best/funniest posts ever on IORR
Posted by: U2Stonesfan ()
Date: July 3, 2015 00:38

Quote
MisterDDDD
The whole "onlystones" tall tale thread of bribing a non-existent head of the catering/banquet department at the Belly Up was pretty hilarious...

DrBryant's response was one of the funniest posts ever

Quote
drbryant
Onlystones told me what happened, and I believe him. In his words:

I knew I didn't have much time, so I called a buddy, who told me that "a powerful friend" had chartered a private jet to San Diego and I was free to join if I could get to nearby Wayne Airfield in 15 minutes. I grabbed my briefcase, which I had filled with unmarked bills in small denominations, and jumped in my Lambo. I knew if I really pushed it, the airfield was still 20 minutes away - I made it in ten. I got on the jet, saw that there were only two passengers, so I picked a seat at the back of the 12-seat jet, placed my briefcase on the seat next to me and was soon sound asleep. I knew that a night of sex, drugs and rock and roll lay ahead, and I wanted to get some rest. I awoke just as we were touching ground in San Diego, and immediately started calling Hertz to get the best sports car they had, when the other passenger turned around and offered me a ride to the city. I looked at him and joked "my mother told me not to get in cars with strangers", and he smiled and replied "this isn't a car", as the hovercraft lifted off.

We were at the Belly Up in no time. I thanked my new friend, and headed for the catering department of the club. I walked in the door and knew things weren't good. My contact introduced himself, and said sheepishly "We need more money. There are these guys from LA, the Diaz brothers, who are offering twice what you offered." For some reason, I just lost it. I'm not a huge guy, but I do have a black belt in karate, and can be scary when I'm upset. I screamed "I have the money, and we had a deal. F#%^* you, buddy, and f#%^* the f#^#%^g Diaz brothers; I bury those cockroaches!" He seemed to get the message, and suddenly I had an "Event Catering" lanyard around my neck and was being led backstage to a small room. Inside, there was a table with a dozen lines - a woman that looked suspiciously like Kate Upton, looked up at me and said "finally! I've been waiting for someone else to arrive so we could party!"

the club was small. I saw BV. Mick wore black and they played "Crazy Mama" and "I Got the Blues". I cried. The rest is history. I'll try to post more later.