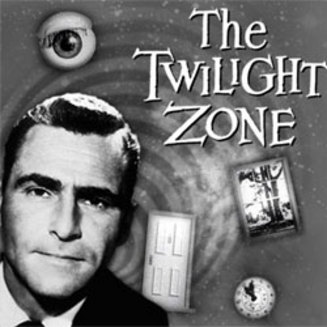 Quote
Ladykiller
One of the videos, which I made.

Not a big fan of Angie, but the crowd singing along gave me goosebumps at the gig!
Options: Reply To This Message•Quote This Message
Re: Vienna 16 June 2014 Rolling Stones show live updates
Posted by: dcba ()
Date: June 18, 2014 23:16

You all looked to have a great time. >

Love your editing skills with the music just really matching up to the video.

Hope you enjoy Rome and I will be in Madrid in a few days time,on Monday before gig.............without a ticket ,but something will come up by show day.

Options: Reply To This Message•Quote This Message
Re: Vienna 16 June 2014 Rolling Stones show live updates
Posted by: crawdaddy ()
Date: June 19, 2014 00:18
Know you had a great time in Wienna BB, and hope you all got back to your homes safe and sound.

Quote
Bitches Brew
Did anyone buy Wien poster, I wanted to buy it but they were 50€ - too much, I think I will just find some good quality picture and print it myself.

I think that Can't Be Seen is getting better each gig.

Nice video and nice version of cbs. Just a "little better" than in Oslo

really enjoyed this one....

Quote
crawdaddy
Know you had a great time in Wienna BB, and hope you all got back to your homes safe and sound.

Quote
Bitches Brew
Did anyone buy Wien poster, I wanted to buy it but they were 50€ - too much, I think I will just find some good quality picture and print it myself. Quote
crawdaddy
Loved your reviews zgubi........Andreea, of Vienna gig and the video of your travels there and looking around the beautiful city of Vienna.

You all looked to have a great time. >

Love your editing skills with the music just really matching up to the video.

Hope you enjoy Rome and I will be in Madrid in a few days time,on Monday before gig.............without a ticket ,but something will come up by show day.

thanks crawdaddy, Rome is not 100% in the books for me, same as Madrid, still not givin up tho' even if there's little time left

I make daily videos on the tour at [youtube.com]
Going to: London - Manchester - Twickenham - Berlin - Marseille - Prague - Warsaw
Options: Reply To This Message•Quote This Message
Re: Vienna 16 June 2014 Rolling Stones show live updates
Posted by: artofstone ()
Date: June 19, 2014 12:34
now i got some time to share my vienna story.

it was my 21th show since 1990 and this one was very special to me:
for the first time i brought my two sons with me, aged 8 and 12. a dream came true, for all of us!
they are the 3rd generation of stonesfans in my family, as my parents first saw the stones on the 1973 european tour.

we arrived at the venue at 11 am with a parking lot right beside the stones trucks. so the fever began. a few fans already around, we took a walk around the stadium, checking out what's going on and hoping to find our entrance gate (GC, the messy situation was mentioned here before...)

we met darryl on his way back to the hotel and decided to take a look. my sons were so excited about the fans waiting in front. so we joined the group.
after a while charlie's personal security-man came out, looked around, scanning all the people, walked directly to us and gave my little son a charlie watts guitar pick with the words: "you're the one, enjoy!"
I'll never forget the shining eyes of my 8 years old boy....

then we had the luck to see the the stones leaving for soundcheck, took the tube to the stadium and were able to hear the last two songs of the soundcheck.

despite all troubles with the entrance-organization, we got a great spot and as the show begun my sons went totally nuts. SMU was the perfect opener for them (as for me 1990). the first three songs they were jumping and singing all along. i really had to fight with tears, so heartwarming...
they almost knew all songs, no whining bout the setlist

and did a last big singalong during the encore.

man, how i enjoyed this show!!!

my only problem now:
how on earth should i argue to go to stockholm leaving them at home?

I bring my son (10 years old) to Torhout Werchter, first time. I really hope he enjoys it! He know all the songs.

I bring my son (10 years old) to Torhout Werchter, first time. I really hope he enjoys it! He know all the songs.

if your son knows all songs he surely will enjoy! believe me...
just make sure you get a good spot for him, where he has a good few without troubles. you'll really have a blast!

have a lot of fun and enjoy!

best,
artofstone
[exhibition on main st]
Options: Reply To This Message•Quote This Message
Re: Vienna 16 June 2014 Rolling Stones show live updates
Posted by: Happy24 ()
Date: June 19, 2014 14:42
Back from my second and final show of this tour, I am sending some pictures again. I wrote a rather lengthy review of the Berlin show, so I won't repeat myself, since it was a very similar wonderful evening. The biggest difference was the venue of course, the Berlin Waldbühne was a special one, while in Vienna we got a standard stadium show with the big stage.

While in Berlin the standing pit was for some 2 500 people or so, the GA in Vienna was for maybe 30 000. There was the diamond circle and golden circle on Ronnies side. Ridiculously expensive if you ask me, the golden circle which reached into the middle of the sadium was really the worst value for the money. To pay 200 E and end up standing in the middle of the stadium, I don't know... The diamond circle for 400 E was also large (regular FOS size), so those who didn't show up early, had to watch it also from quite a distance. From what I saw at some pictures, both those sectors were quite packed.

Anyway, I had a GA ticket for 98 E, with which, showing up early, one could end up right in front of the stage on the Keith's side. I came to the stadium at 4 p.m. There were two entrances for the GA. There were quite a lot of people at one gate, so I went to the other one, which was maybe 20 meters more distant from the U-bahn. There were like 50 people sitting on the pavement in front of the gates. It looked strange, so I asked the organiser, whether it really was a GA entrance, since there were many (I mean many) more people at the other one. He just said those entrances were identical, but the other one was closer to the U-bahn :-) So I sat down, I was fifth in front of one of those gates. I could not believe it, it looked like I would be in the first row.

They opened the gates rather late - at 6.15 p.m. and well...I didn't end up in the first row, since there was this "early entry" thing, that you could buy for...300 E? Do I remember it correctly? Jeeeezzzz! So there were some people at the stadium already, when it was officially opened, but eventhough I was a bit more far away than in Berlin, I had a great spot and was really happy with it. They actually did a sort of FOS sector at Keit's side too, they built a wave breaker just in the line with the golden circle - right in the middle of the stadium - and they had a certain amount of wristbands that they were giving to people, as they entered. First come, first served. Once they run out of wristbands, they closed the gate to the sector. Not that it would make a huge difference, there was no reason to walk away from the sector, but it is surely nice not to have the whole stadium pushing from the back.

The show itself was similar to the Berlin one, the setlist was identical, except that Angie was played instead of Waiting On a Friend. Even the request song (Get Off Of My Cloud) was the same. The band played really great again, there were just more smiles on the stage in Berlin. I guess the Waldbühne venue made that show special even for The Stones. The crowd in Vienna was generally younger (probably thanks to the cheaper GA tickets) and really into it, creating a great atmosphere.

Maybe this was the last time I had the chance to see The Stones, but one could suspect that 40 years ago and ever since, so maybe I will see them the next year, maybe in 2 or 3 or 5 years. Right now I am really happy I enjoyed those 2 shows, which were all I hoped they would be and more. 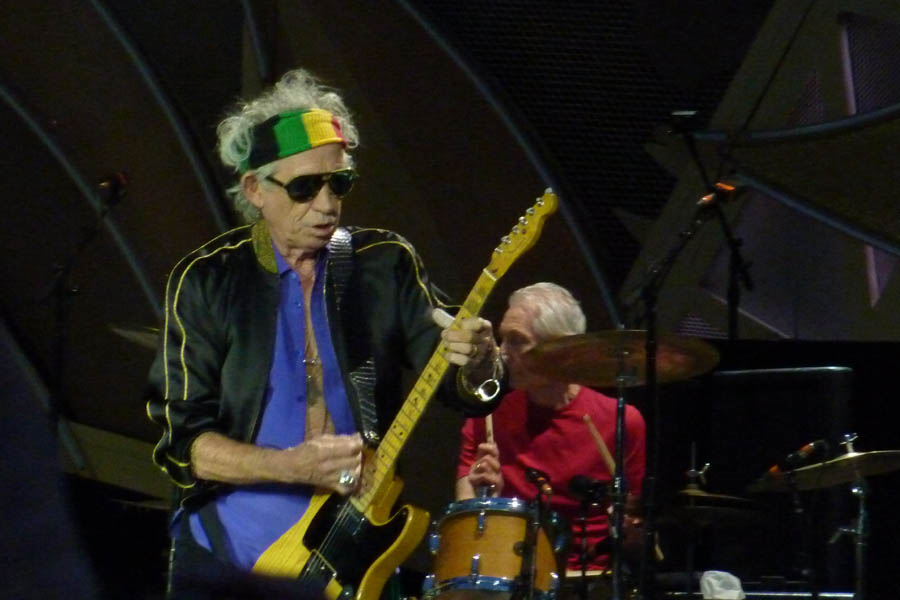 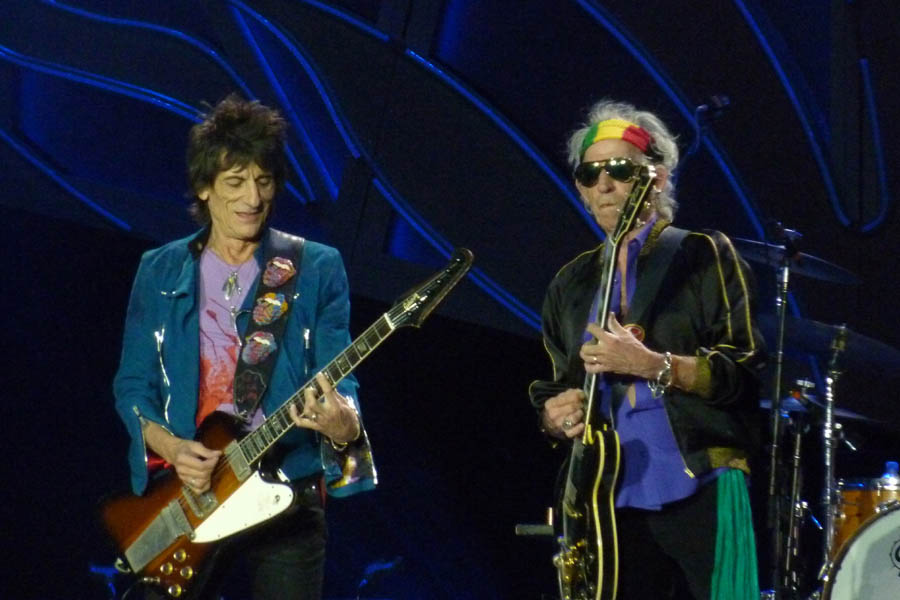 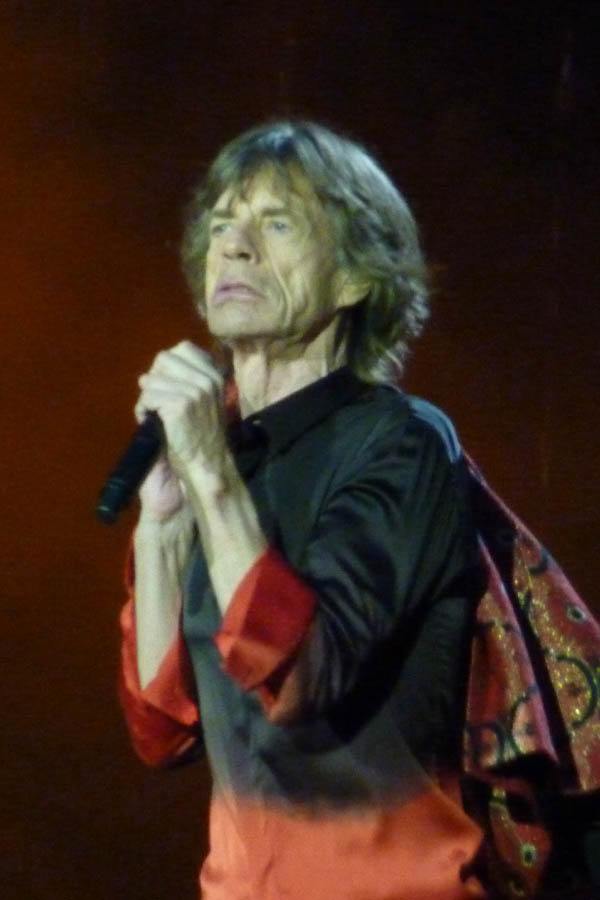 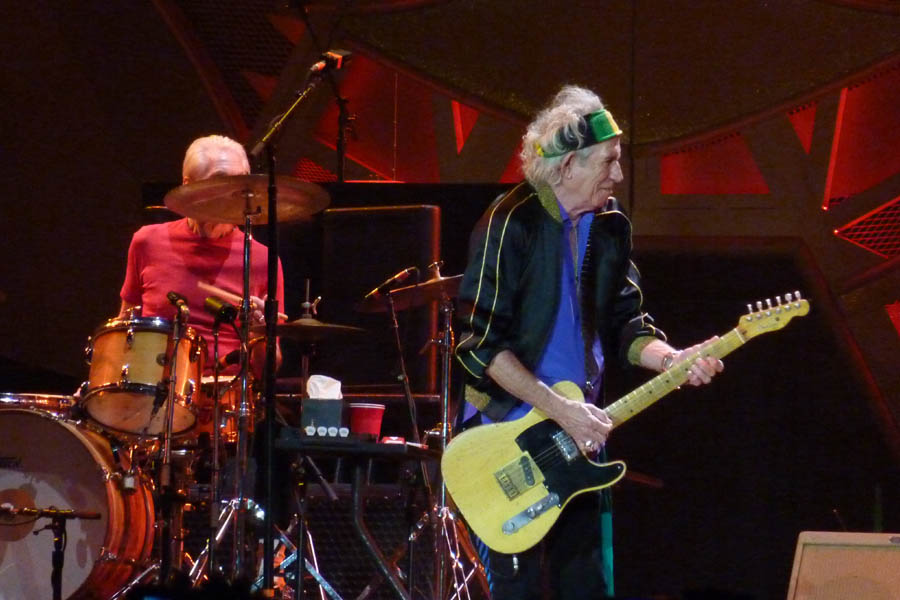 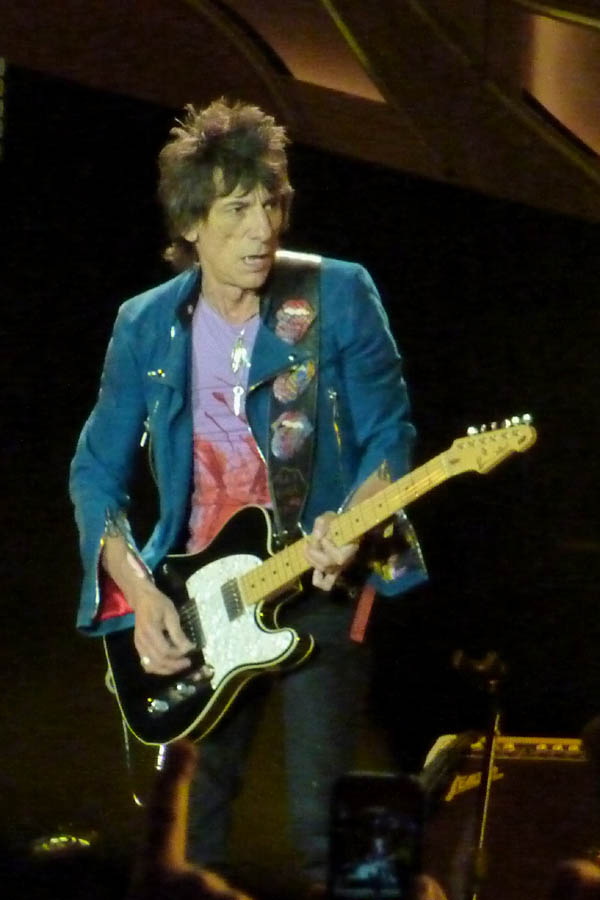 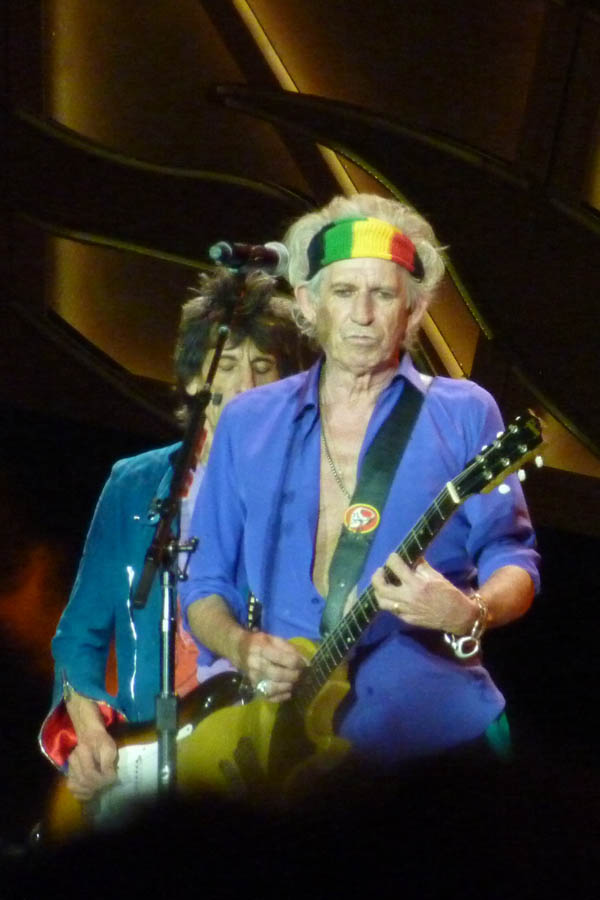 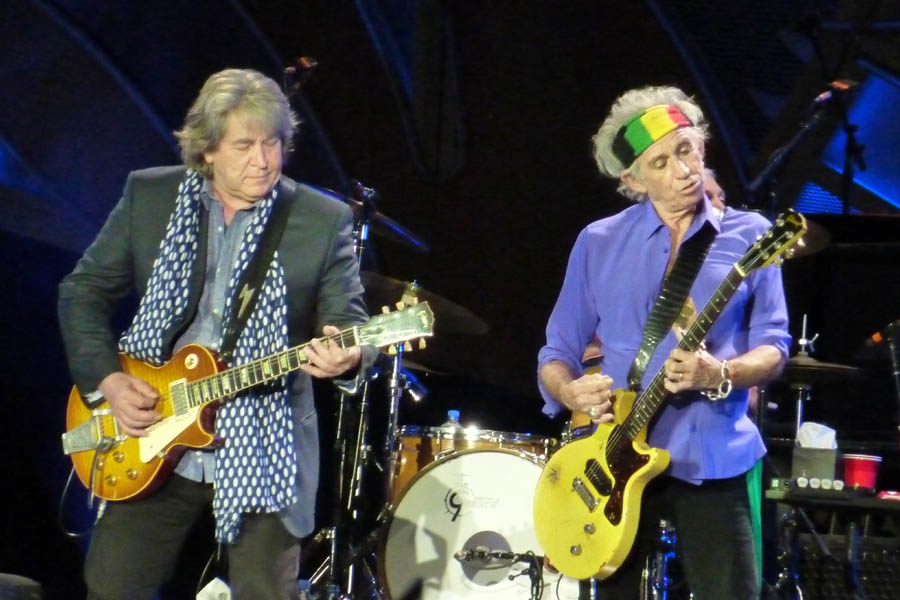 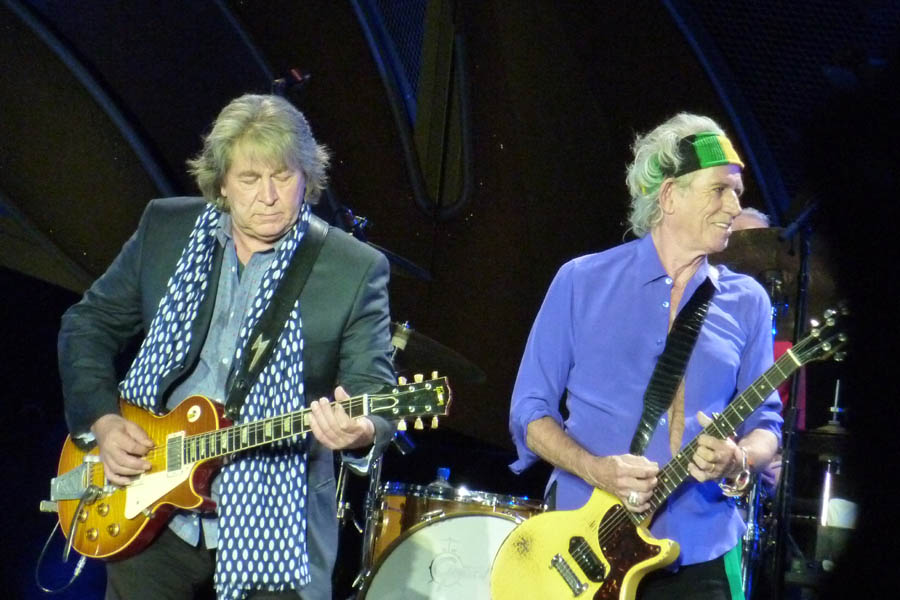 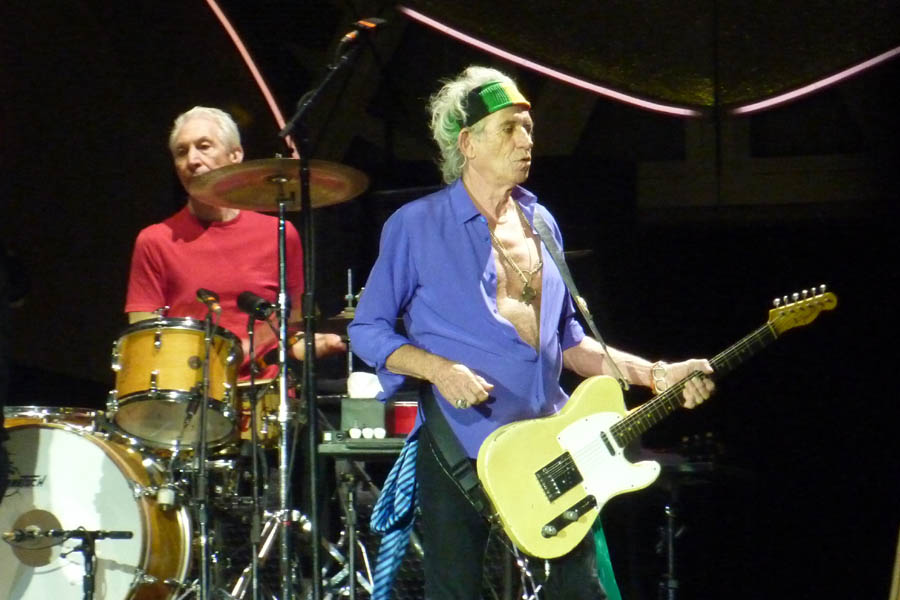 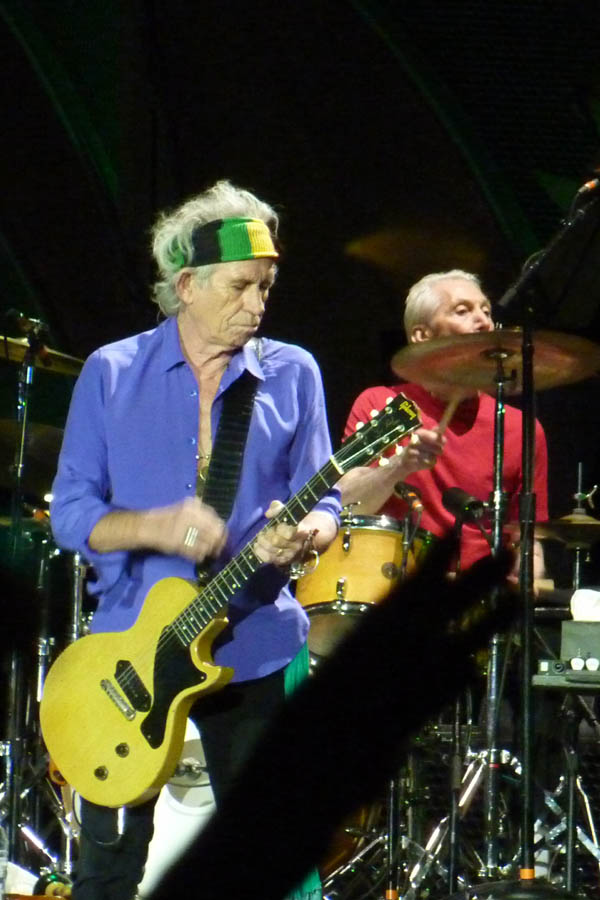 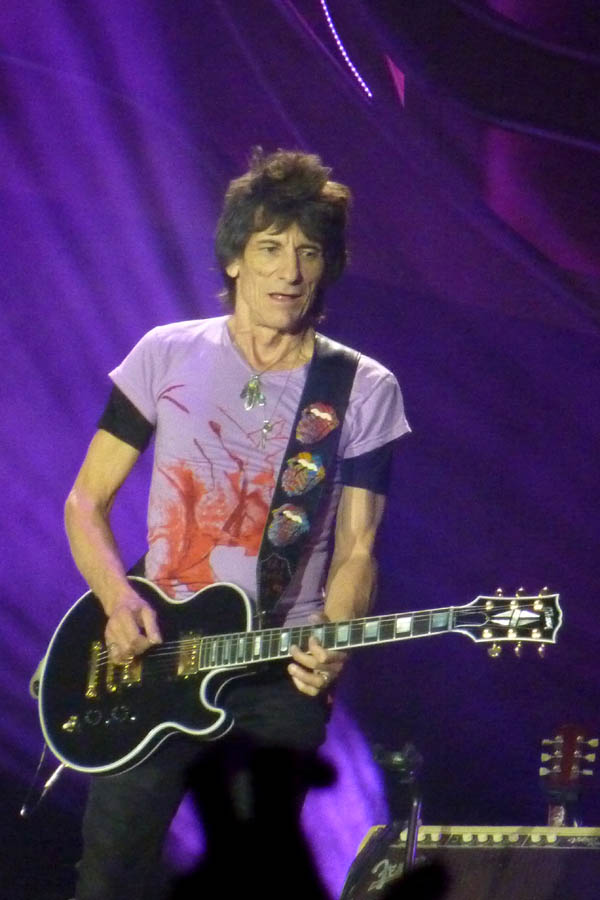 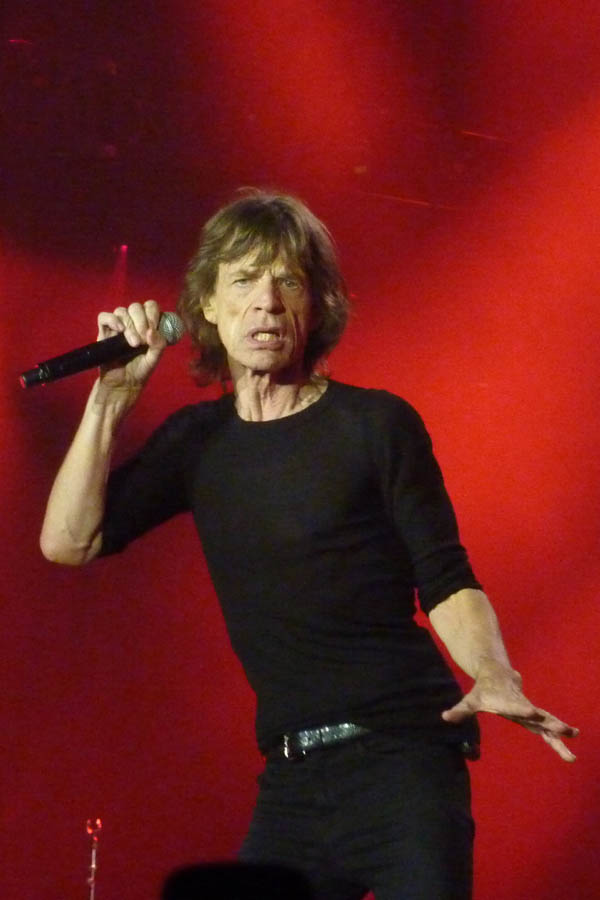 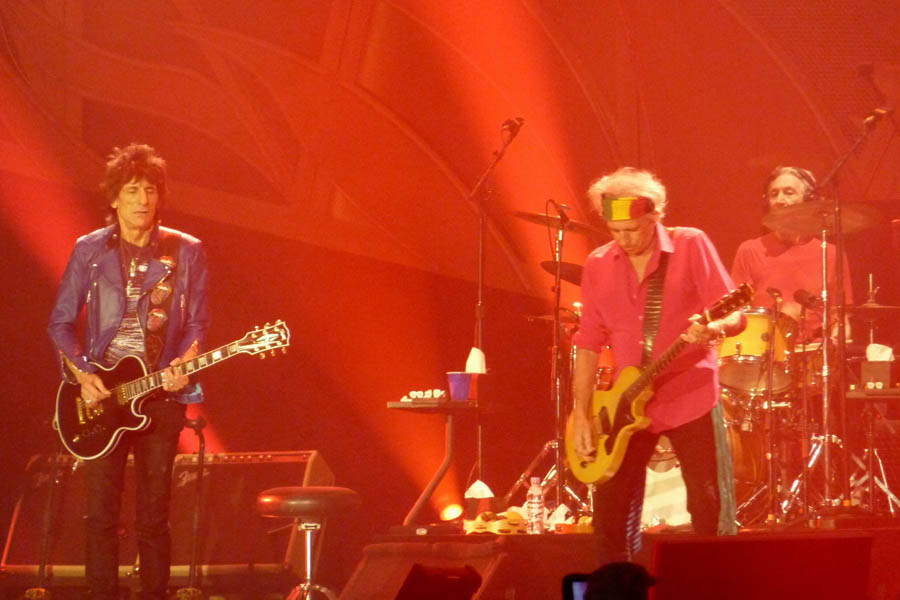 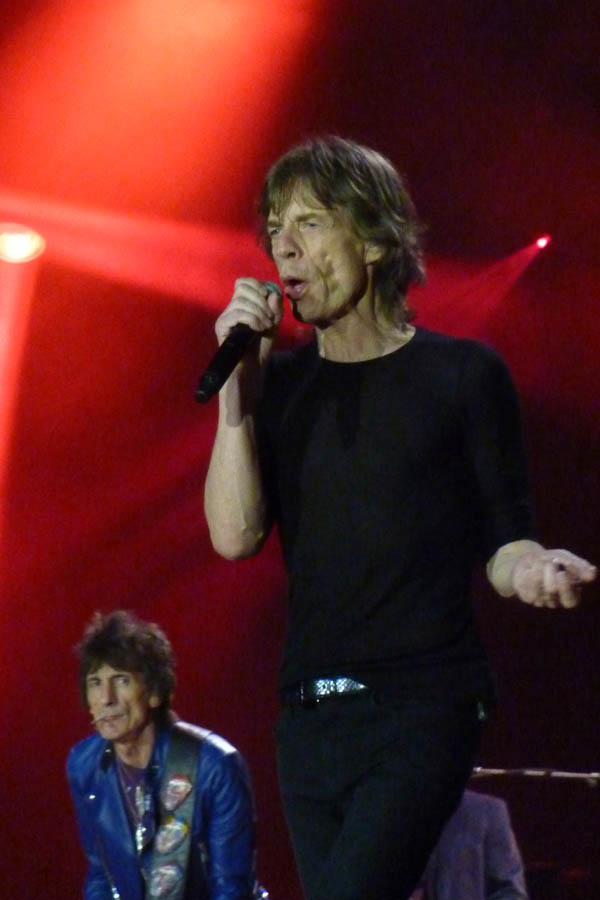 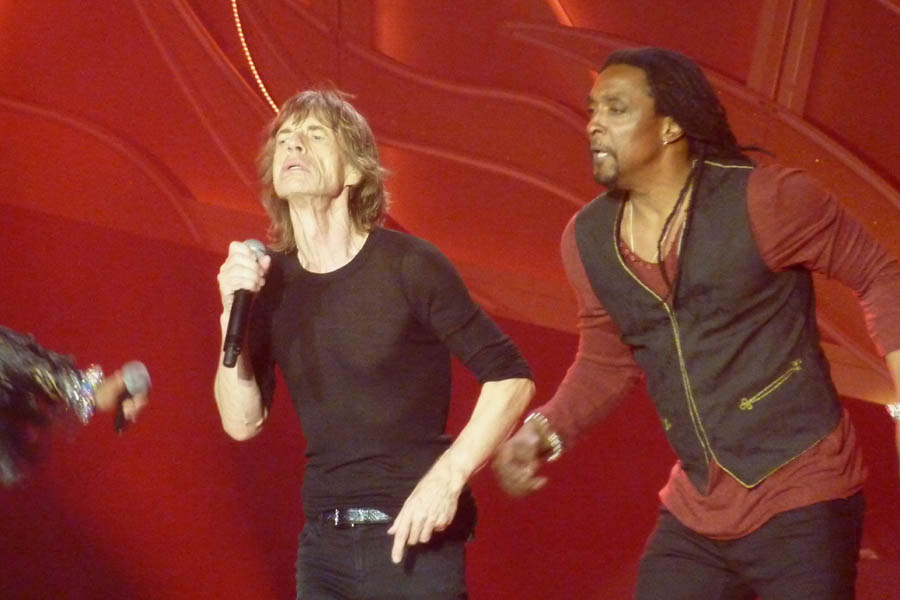 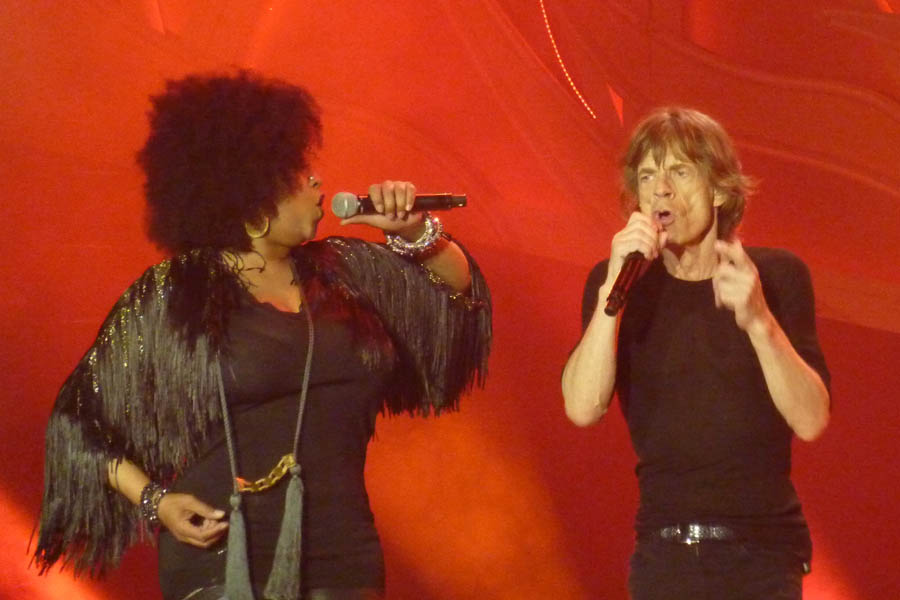 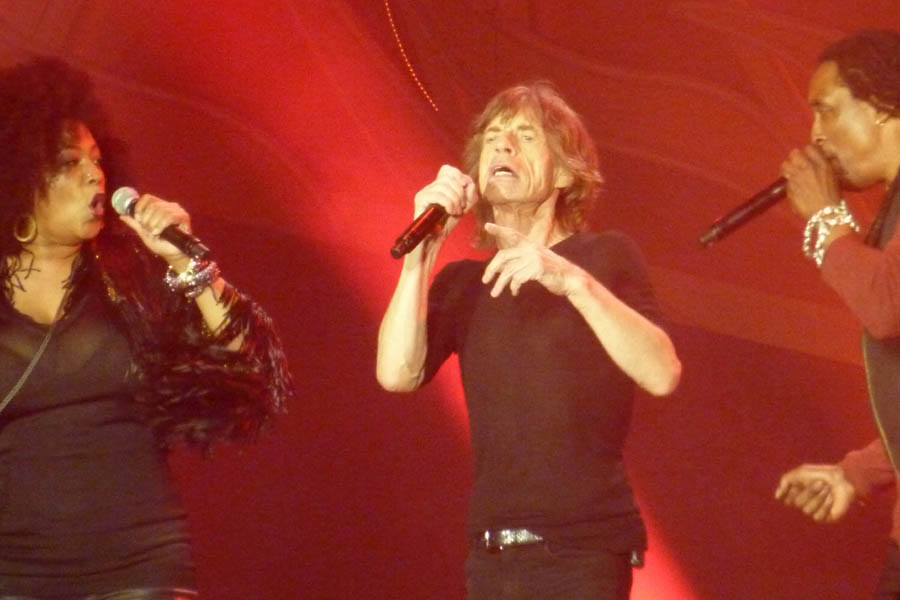 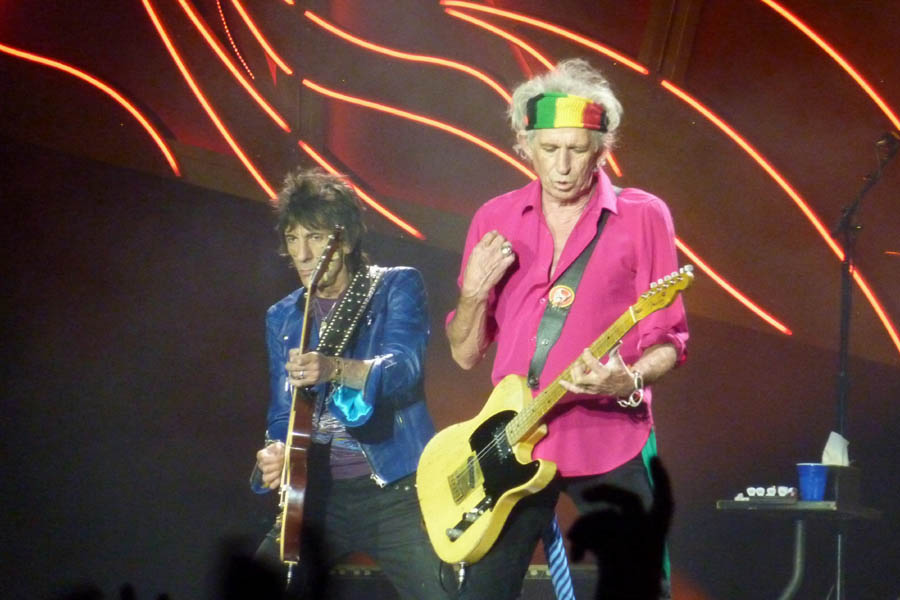 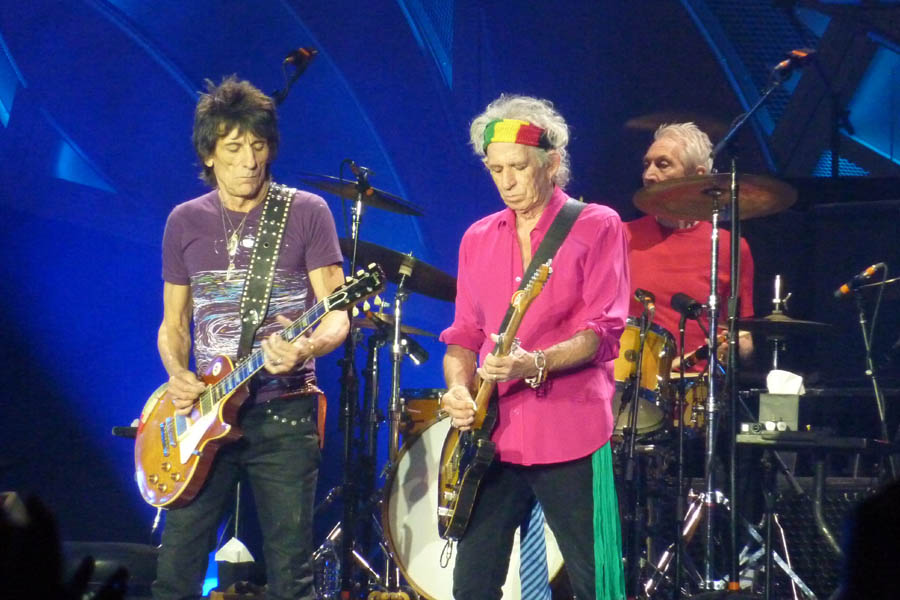 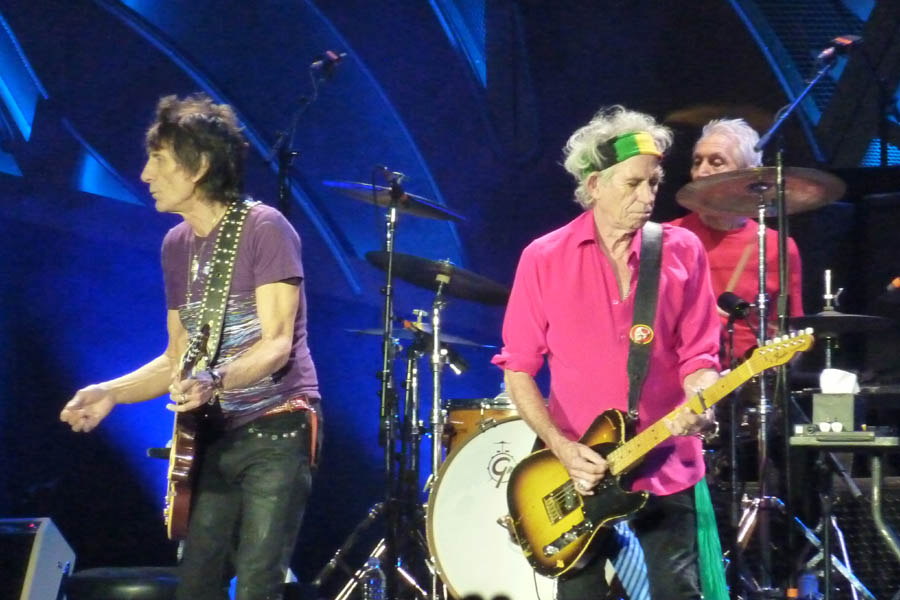 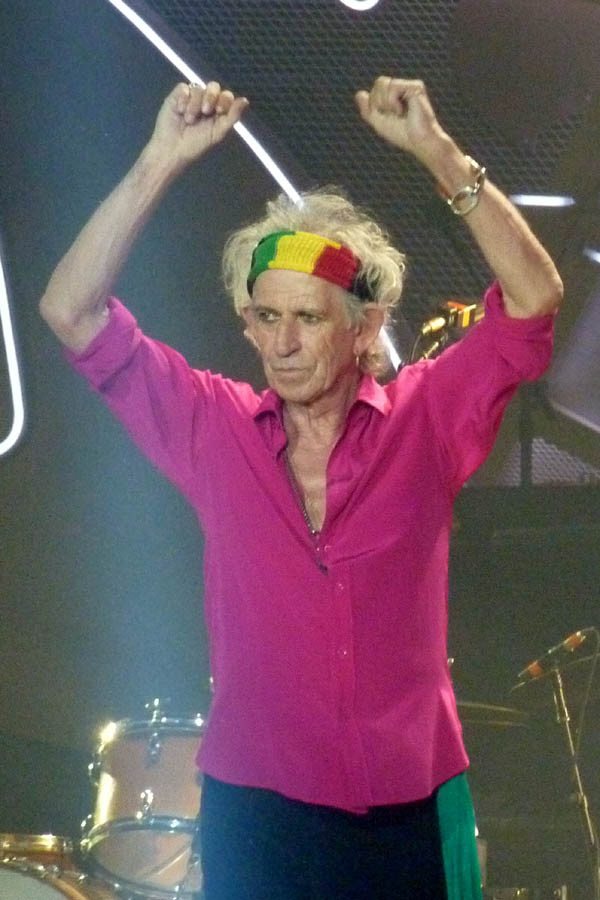 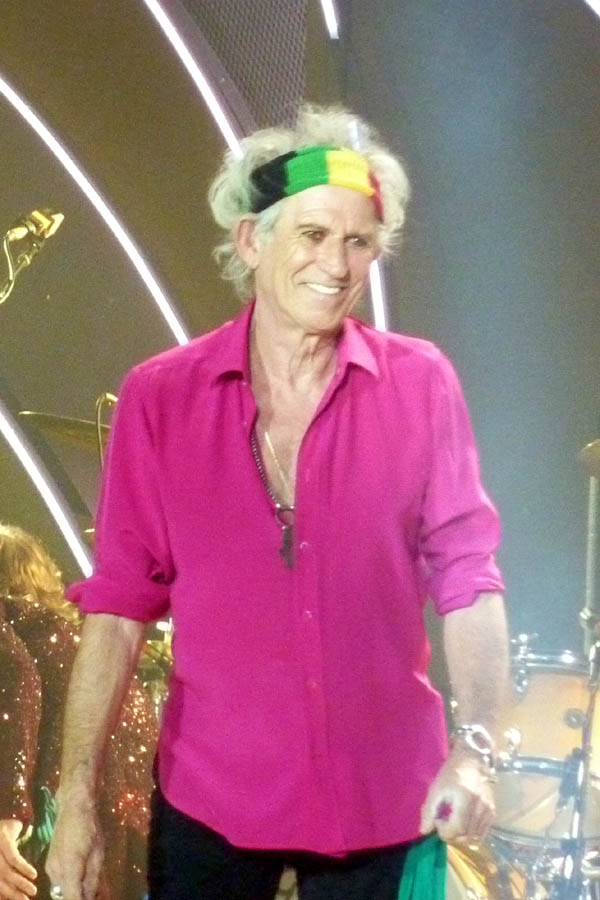 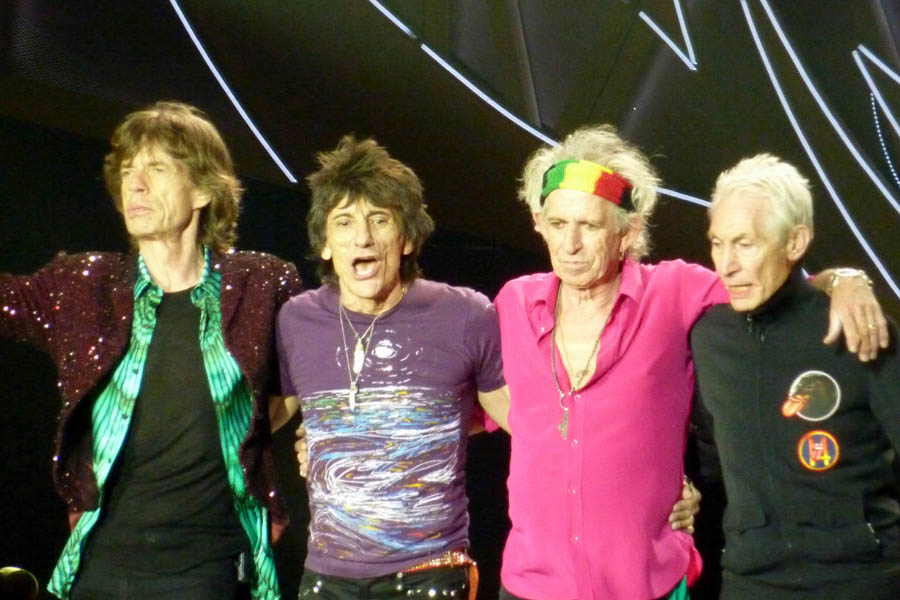 glad to hear you enjoyed the show and everything went fine with your GA.
(it was the right decision not to choose the vip-seat with sandwiches - as we joked during the ticket sale

you're right, the whole layout was really strange. i was one of these "crazy" GC's, to make sure my sons are able get a good spot without troubles.
there were only 35 early-entry guys in the golden circle, so we easily made it on a rail and all was fine. and yes, GC was very packed when the show started.

artofstone
[exhibition on main st]
Options: Reply To This Message•Quote This Message
Re: Vienna 16 June 2014 Rolling Stones show live updates
Posted by: BBrew ()
Date: June 19, 2014 18:33
This guy was just one row in front of me and he caught the stick and the pick. I congratulated him and told him :"You better not put these on ebay or I will hunt you down..." haha

You all had a great time. That's the main thing.

Options: Reply To This Message•Quote This Message
Re: Vienna 16 June 2014 Rolling Stones show live updates
Posted by: angee ()
Date: June 19, 2014 21:02
Thanks, everyone, so enjoyable to read your reviews and see the pics.

On Charlie's jacket for the post-show bow, he now has a 14 on Fire patch below his Grrr patch.
I just noticed that, duh!

Quote
jenyk
Great pictures! Could somebody tell me: Is Ronnie´s black guitar Gibson L6-s? (First black guitar is his signature ESP tele). I know he owned 1 pickup Gibson L5-s, but this guitar on the picture is some 2 pickups version. Thanks for info.