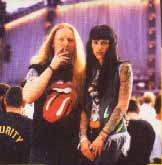 All parts of the It's Only Rock'n Roll site is copyright of The Rolling Stones Fan Club of Europe. When using information from this site, please include a reference to IORR and the main web address /. IORR is a non profit fan club run by fans for fans. For more details see the IORR magazines, published quarterly.

Bridges To Babylon
The European Tour 1999

The Summer 1999 Tour will be shorter than normal, probably lasting for about 3 - 4 weeks, from late May to late June. The tour is mainly done to cover the postponed Bridges To Babylon shows in UK (Edinburgh, Sheffield and 2 x London), but they added some "bonus" shows in Germany, The Netherlands, Austria and Spain.

This is a complete and up to date list of concerts by The Rolling Stones, to be held during 1999. It is based on extensive work, research and experience. Those concerts marked Confirmed are officially confirmed. Those marked RUMOURED may happen, but details are still not confirmed. PROBABLY mean the date is confirmed by insiders, but not officially yet. Dates in (paranthesis) mean there might be a 2nd show if you all rush out and buy tickets the morning they go on sale for the 1st show! POSTPONED means the show is delayed, and will be re-scheduled to another date. CANCELLED means the show has been cancelled, and there will NOT be another date at that place. Don't pay for expensive travel until concerts are confirmed, and please note that even confirmed concerts may change. This list is supplied by the IORR fan club to fans, for convenient planning of your 1999 life as a Stones fan!

Also, it is expected that they will do one or more smaller sized club or arena shows in UK, in addition to the already confirmed stadium shows. Rehearsals for the European tour are espected to start by Mid May, i.e. two weeks before the tour start.

For details about how to get tickets etc, see the official the-rolling-stones web site!

Sorry, but those planned shows for the MSG/NY seems to be scrapped. When this European tour is over, the Stones will probably take a long rest.

If you have information or comments, please send email!

For more information about Stones shows, travel and tickets, see IORR 36 mailed out by May 15th, 1999!