maybe they still adore their late polish pope. lordy when he died, it was a major event on the planet with 24/7 tv coverage, even in the US i heard. actually it was all kind of moving, even for us non-religious types. the Stones managed to play SFTD in Rome - guess the Church is not so influential here, at least overtly. anyway never mind, bla bla bla blaaaa, don't mean to highjack this thread to talk about the POPE !!!

think i'll go look for some "love is strong" footage from warsaw now...

I must admit,SFTD is the one song that I wouldn't care if I never heard it live again!

Roll on Slane and London!

Si.
Options: Reply To This Message•Quote This Message
Re: Warsaw show and news updates
Posted by: loochie ()
Date: July 26, 2007 10:03
Sympathy in Warsaw


ah okay, there are a whole series of these stones bike videos


Oh, and by the way: the'll do Sympathy in Russia for sure. They can't miss the only chance to sing "I stuck around St. Petersburg" in this city.


Keith did it again, he said "it's nice to be here for the 2nd time" which gathered a roar of laugter and applause, cause...it's KEITH and he's awesome.

Unforgettable.
Options: Reply To This Message•Quote This Message
Re: Warsaw show and news updates
Posted by: arizojp ()
Date: July 26, 2007 11:11 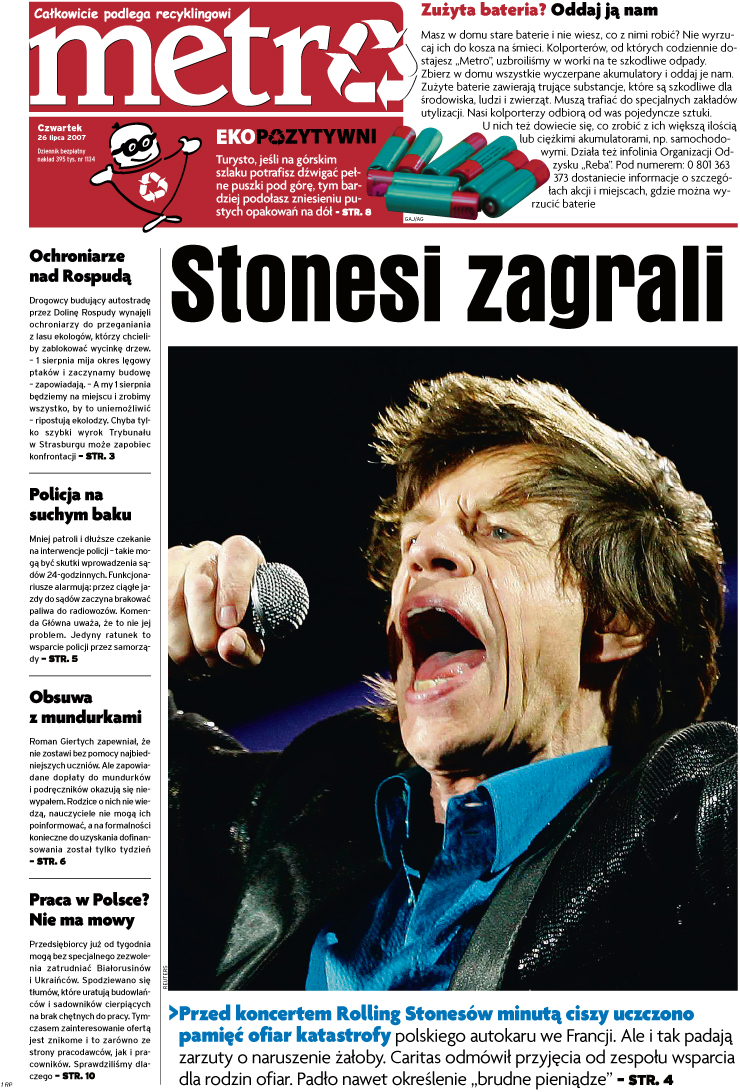 (A) "Great review by GStone-sounds like another fine show."

"I must admit,SFTD is the one song that I wouldn't care if I never heard it live again!"

Those moments are always the best. I had similar experience with Mick. During Satisfaction he ran down the catwalk towards small stage. Then he started to run back but at some point he stopped right next to the place where I stood. He faced our side, waved to us and ran to the main stage. He was standing maybe 1 meter from me. Unfogettable!
Options: Reply To This Message•Quote This Message
Re: Warsaw show and news updates
Posted by: toomuchforme ()
Date: July 26, 2007 22:28
I am happy to read that this show was awesome. So, one more !

I do not agree folks with your opinion about SFTD. This is a MUST. Many terrific live versions were made of SFTD (Baltimore 69, Hyde Park, 1989/1990 tours). This is one of Mick's favourites songs with Gimme shelter.
Options: Reply To This Message•Quote This Message
Re: Warsaw show and news updates
Posted by: gstone ()
Date: July 26, 2007 23:59
I just can't get over yesterday's show! Guess I still have not landed. And there's one song that's still swirling around in my ears... "Satisfaction". It's very obvious that Keith is still exploring the song. And yesterday he opened it like Marc Bolan of T-Rex would have done! I just loved it! Did anyone else make this comparisson? Is there a youtube-video of it somewhere? And when is the bootleg from Warzaw ready? I just can't wait.
Thanks to the crowd, who strongly contributed to this fabulous show. This is what happens when you give some response! You get a lot in return. And I think it's been a good while since I last saw the Stones this good. So, thank you - you wonderfull Polish fans - and thank you Stones! It was a pleasure, a thrill. And I will remember that night in Warzaw for as long as I shall live.
Options: Reply To This Message•Quote This Message
Re: Warsaw show and news updates
Posted by: SWojtek ()
Date: July 27, 2007 00:10
> that Church is still very powerful in Poland!

No it is not, believe me. It's a myth. Caritas Polska which did not accept the money is simply hipocritical, jealous ant pathetic all together. We Polish people are not like that! We really appreciate the RS gesture. The tragedy of the families of the victims does not end at 24.00 Wendesday. It starts when politicians and media does not care about "old hot news" anymore and those families stays on their own without any help, also financial.
The group of extreme catholics (including Caritas) is not that big in Poland but very loud and influential on current gouverment (nice amounts of votes). Caritas and Gouverment promised a year ago a help to victims of roof colapse in Katowice fair hall and what... nothing , they wait until today.
So guys just ignore those stupid comments of so called good catholics! Our Pope (JP II) was not like that, he had a different vision of catholicizm.

I had a great evening with RS yesterday. We all had.It was 40 000 people. Great show, great sound, great guitar solos, absolutely great Keith, Mick on harmonica beyond words, respect to victims of bus crash, happy birthday to Mick, Mick saying a lot in Polish. Today's newspapers with entusiastic reviews.
Thanks guys for such a unforgetable performance.

Wojtek
Options: Reply To This Message•Quote This Message
Re: Warsaw show and news updates
Posted by: sater ()
Date: July 27, 2007 00:27
> that Church is still very powerful in Poland


About propaganda ,that was probably his first gig from ABB so for him this was the best...and maybe he is from Warsaw????just kidding

but I still hate this shitty town

and I agree with You !!chorzów rocks!!!this was one of best stones show ever!!!!