Goto Thread: Previous•Next
Goto: Forum List•Message List•New Topic•Search•Log In•***Print View
Goto Page: 1234567891011...LastNext
Current Page: 1 of 14
SIXTY Tour new stage
Posted by: swaff ()
Date: May 25, 2022 03:39
Getting excited here. Any shots of the new stage yet???
Options: Reply To This Message•Quote This Message
Re: SIXTY Tour new stage
Posted by: DiegoGlimmerStones ()
Date: May 25, 2022 04:24
Looks like the construction of the new stage began yesterday (May 23) at the Wanda Metropolitano. Some pics have been shared on Facebook and Instagram

Quote
Papo
I expect a not too elaborate stage design, maybe just a giant screen with a roof.

Certainly hope not. Did like the NF set up!

And with the prices I demand a decent stage

Better not come close, you won’t see much of the stage. But you know that. I rather see less of the stage and see more of Keith, Mick, Ronnie and the others

Better not come close, you won’t see much of the stage. But you know that. I rather see less of the stage and see more of Keith, Mick, Ronnie and the others

from everywhere outside the pit there's too much of the stage to been seen
Options: Reply To This Message•Quote This Message
Re: SIXTY Tour new stage
Posted by: Stonesfan2146 ()
Date: May 25, 2022 16:15
Hope it won't look to cheap. Once again built on a standart festival stage...
I thought they learnt their lesson with the 2014-16 stage.

Quote
Stonesfan2146
Hope it won't look to cheap. Once again built on a standart festival stage...
I thought they learnt their lesson with the 2014-16 stage.

I think the 14 On Fire stage really wasn't a good choice by the band, and I think they realized it themselves later. Even if the initial design revealed in Olso looked very cool, in many concerts (For example Madrid) they couldn't even use the whole stage design, maybe because of logistics, and it looked very strange.

In 2015 and on the Australia leg of 2014 they couldn't use some of the inner frame parts due to the stage being too low to fit them, which also made the stage look incomplete if you knew the original design from the Europe tour. Just check out Hunter Valley. I think everyone would have preferred the No Filter stage at that point. The big weak point of the stage was just that it also worked with some of the parts missing, so some concerts had the Stones touring with an almost completely standart festival stage - which for me looked cheap and not suited for a concert like this. 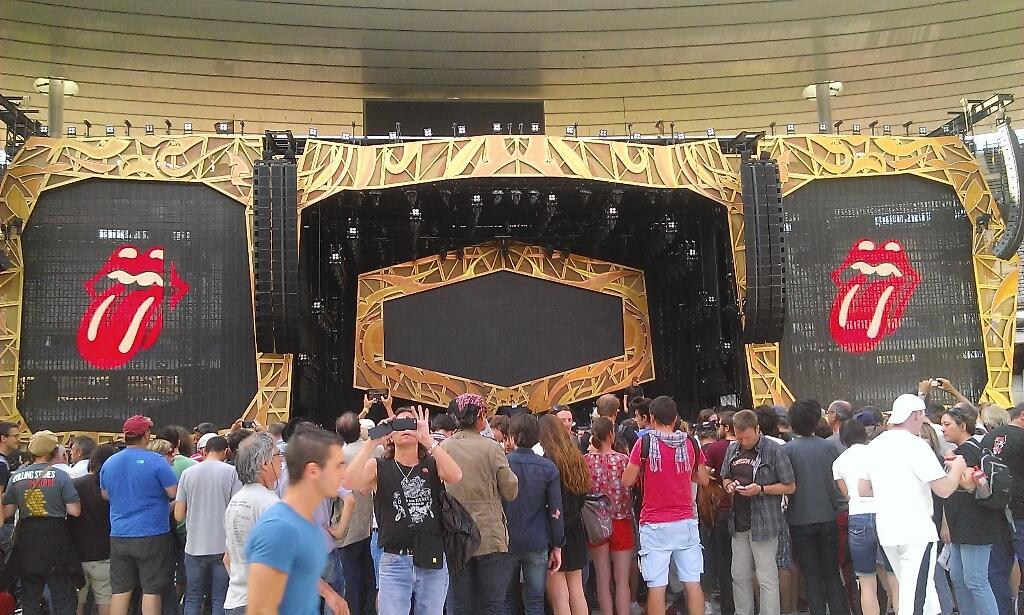 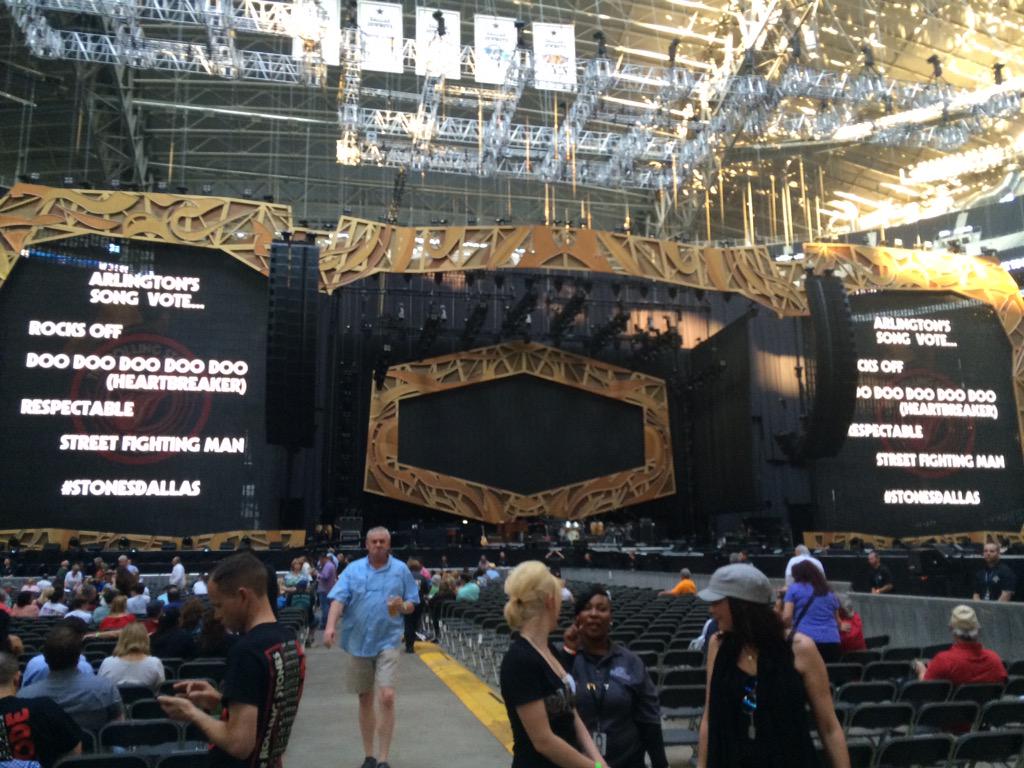 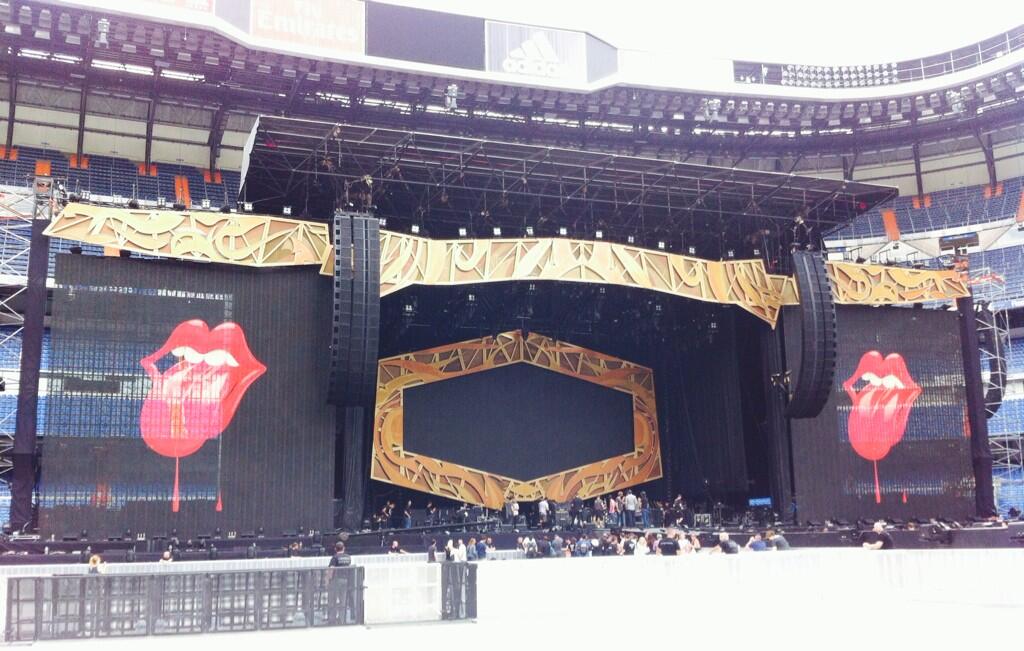 Madrid with a lot missing. Posters in the live thread were already commenting on it, some people saying this looks "low budget" 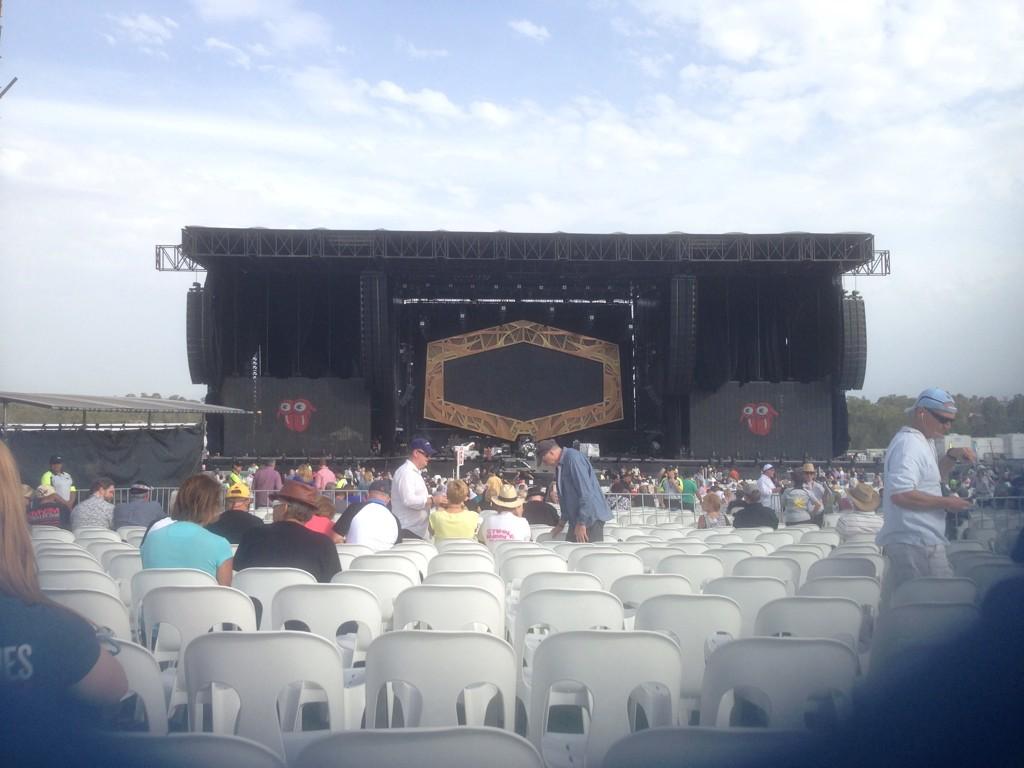 Hunter Valley, well, not much to say here...


So I really hope they will never use a standart festival stage as a backdrop again, because then something like on that tour can't happen at all. It never happened during previous tours with their own setup.

Maybe that's even why they went with the No Filter tour design being so simple, because it can't have any missing parts. I'm sure the Stones were not happy to see this happening during their tour with their own stage.

Last month Metallica played here in Buenos Aires and they put their own stage in a "festival design" with the roof and all that stuff.

Here's an image of what i'm saying. 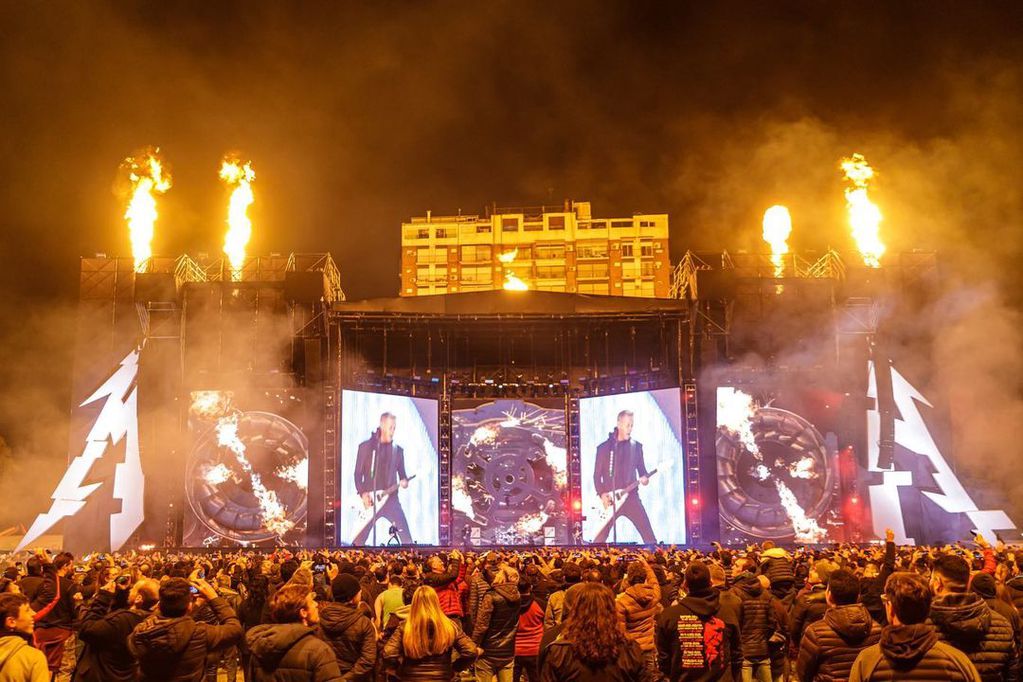 Options: Reply To This Message•Quote This Message
Re: SIXTY Tour new stage
Posted by: Nikkei ()
Date: May 25, 2022 18:00
I agree only building up half of it has a negative impact. The design itself however still holds up and as a backdrop it made for better photos than during the whole of No Filter. These pixelated background pics just aren't nice to look at

And it's true, the stage doesn't have to look that much like the standart festival stage, we will see in the next hours and days what Stufish came up with but I guess the budget was not extremely high.

The No Filter stage was for sure more expensive to build than the 14 on fire stage.

I’ll never forget I was front row with my wife in Adelaide, 14 on Fire tour in 2014. So close to the stage that we never saw the fireworks at show’s end. We were walking back to hotel after and I was saying to wife that I was sure they did fireworks. Someone overheard me and say “they did” and showed me pics they took from up in the grandstand. They were great shots of the “event” we missed from being front row!!

Quote
Martin90
Maybe they design a stage that could fit the BST shows in Hyde Park? Not necessarily cheap but something more easy to build or adapt.

Sorry I can’t!! Not that I have new pictures though. But i always have problems posting pictures here 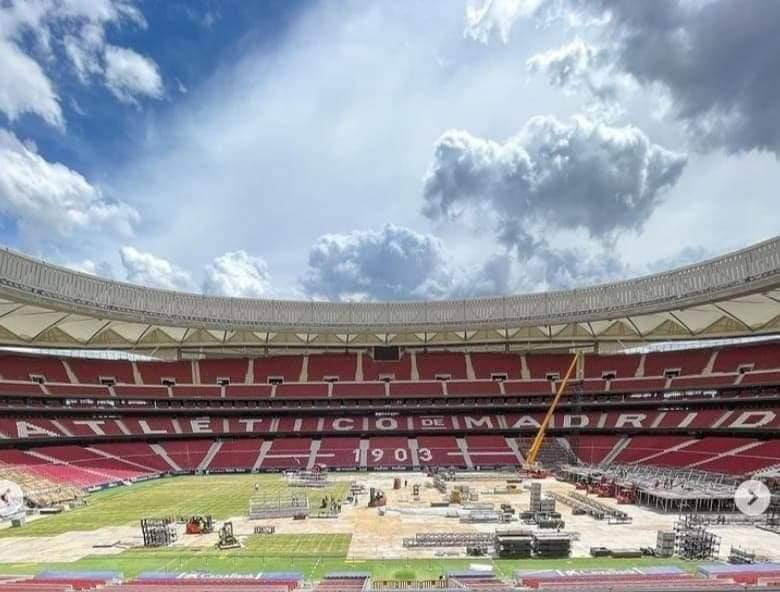 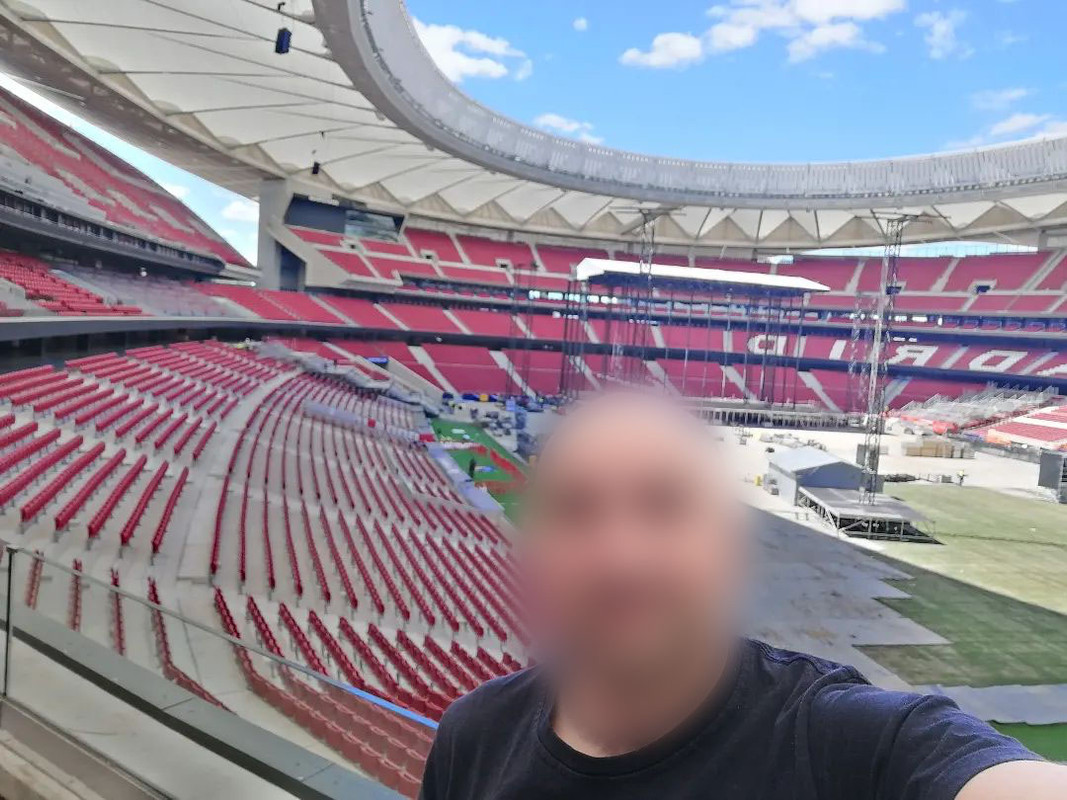 Thanks!
(I have to admit the stage doesn't look very promising…)
Options: Reply To This Message•Quote This Message
Re: SIXTY Tour new stage
Posted by: Stonesfan2146 ()
Date: May 26, 2022 17:20
If you think about 14 On Fire it really doesn't.
I really liked the roof of the No Filter tour stage, very small and transparent for most part.

I'm really concerned it might at some point look like this again, with the roof being the biggest design element of the stage: 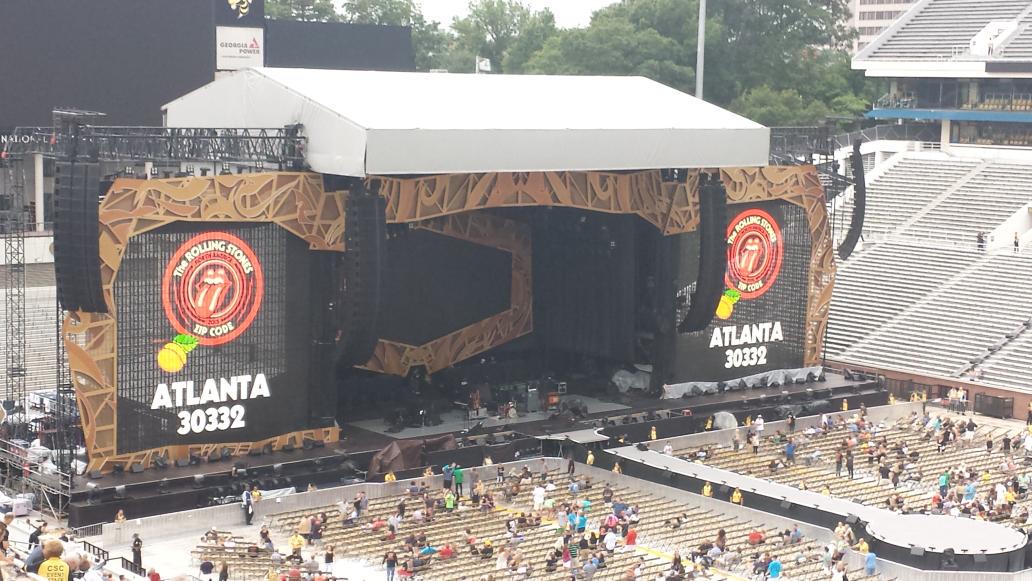 This is btw another leg where the frame didn't fit under the roof so they had to lower the whole frame, so you could basically see the steel structure above the video frames at the right and left sides.

Options: Reply To This Message•Quote This Message
Re: SIXTY Tour new stage
Posted by: Barkerboy2 ()
Date: May 26, 2022 18:01
How does it 'not look promising'? It's literally just scaffolding at the moment!

Give it a chance!