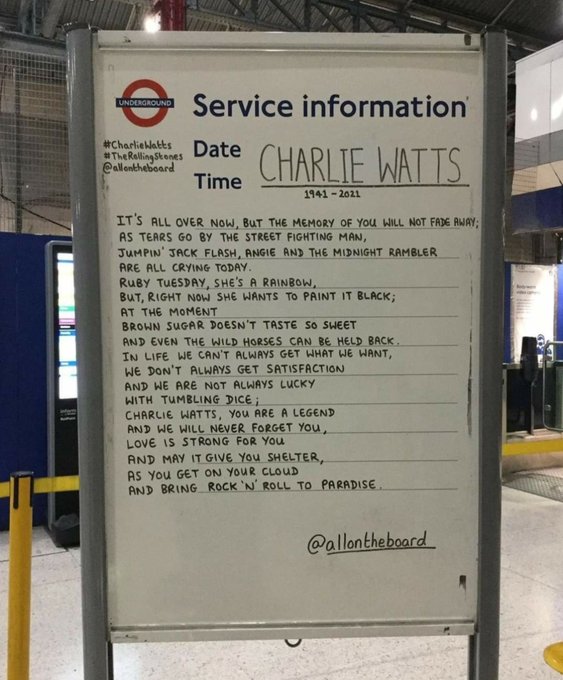 If you really want to understand the eloquence, generosity and impossible grace of Charlie Watts just listen for the first time he touches his drums on any Rolling Stones song.

Two thumps at the top of “Gimme Shelter.”


Watts is totally fine with letting the maniac over there play the curtain-raising guitar riff, but when it’s time for the song to really get up and get moving, the drummer doesn’t launch into a fireworks show or somersault down the stairwell. He just pats his snare a few times, as if he’s patting us on the back, bringing us into the music with him. C’mon. Let’s go.

Watts — who died in London on Tuesday at 80 — was a misfit among misfits, a gentleman lost at sea with hungry pirates, a cool jazz mind in the world’s most insatiable rock-and-roll troupe. He dressed nicely, he performed with excellent posture, and he struck his drums with a politesse that somehow made the music of the Rolling Stones feel exponentially rude. He knew what was essential to his band’s singular surge-and-swing, so that’s what he did. No grand gestures, no wasted strokes. “When you’re playing rock-and-roll, you know, the challenge is .?.?. the regularity of it,” Watts said in 2008, inadvertently explaining the riddle of his magnificence.

His drumming was designed to be felt more than noticed, and the world seemed to do it in that order. “Charlie’s good tonight, inne?” Mick Jagger asks before the penultimate cut of “Get Yer Ya-Ya’s Out! The Rolling Stones in Concert,” a throbbing 1970 live album that features Watts on the record jacket, big smile, seemingly walking on air. He usually played it so cool for the camera. What’s with the glee? Maybe he knew Jagger could have popped that question in the middle of any Rolling Stones concert and the answer would have always been “yes.”

It held true if you caught the Stones live anytime in the 21st century, too. Keith Richards describes guitar playing as an imperfect communication between two hands, and that concept definitely extends to how his hands steadily strengthened their telepathic connection to Watts’s extremities for nearly 60 years. In his 2010 memoir, Richards writes that Watts’s greatness has “something to do with the way Charlie’s limbs are constructed.” What a way to understand someone. Apparently, the Rolling Stones learned to read each other’s minds by reading each other’s bodies.

But more than anyone else in the band, Watts was also reading time. Jagger and Richards were always free to make a mess of it, smearing notes and smudging temporality — and that left Watts to uphold “the regularity” of his band’s fantastic rock-and-roll, to keep those songs moving forward, measuring time in evenhanded thumps and whacks, reminding our bodies what it feels like to move deeper and further into life.

Watts’s steadiness made the music’s excitement feel almost perpetual, which, in turn, makes it hard to remember how a lot of Stones songs end. Go check their albums and you’ll be reminded that the band’s most celebrated songs — “(I Can’t Get No) Satisfaction,” “Paint It Black,” “Sympathy for the Devil,” “Gimme Shelter,” “Rocks Off,” “Miss You,” “Start Me Up” — do their nasty, dazzling things, then fade out to silence.

This was a band that didn’t know how to stop. Until now, they didn’t have to. Edited 1 time(s). Last edit at 2021-08-25 02:54 by MisterDDDD.
Options: Reply To This Message•Quote This Message
Re: Charlie Watts Dies at 80
Posted by: ProfessorWolf ()
Date: August 25, 2021 02:56
so sad i've read every single post on this thread clicked on every link and watched every video the world can't ever be the same feel so bad for shirley can't imagine the depth of her loss

same here
Options: Reply To This Message•Quote This Message
Re: Charlie Watts Dies at 80
Posted by: Rokyfan ()
Date: August 25, 2021 03:18
Charlie Watts was a man who lived his life the way he wanted, never seems to have hurt a fly and did nothing but bring joy and happiness to millions of people.

yep
Options: Reply To This Message•Quote This Message
Re: Charlie Watts Dies at 80
Posted by: winos ()
Date: August 25, 2021 03:37
Having been a fan for 50+ years after first hearing Honky Tonk Women, I too are devastated about the news of Charlie's passing.

I saw Charlie up close standing behind the B stage in Melbourne in 2003 and it was one of the greatest highlights of my life. I couldn't believe the sound he produced with beautiful and subtle timing.

From all us devoted Rolling Stones fans here in Australia....RIP Charlie a truly one off drummer and gentleman.

Quote
Taylor1
A part of all who love the Stones is gone. The Stones are not the greatest rock n roll band without him. Thanks for all the joy and excitement you gave us

The loss is profound
Options: Reply To This Message•Quote This Message
Re: Charlie Watts Dies at 80
Posted by: Jimmy C ()
Date: August 25, 2021 03:42
From an interview today with Ringo from the Wall Street Journal:
Though they were friends for decades, Ringo Starr was blindsided by the announcement of Rolling Stones drummer Charlie Watts’s death, just like millions of fans world-wide.

“I knew he wasn’t doing well, but it was a shock to me,” Mr. Starr said in a Zoom interview just two hours after Mr. Watts’s death was announced.

Mr. Starr said that drummer Jim Keltner called Monday to tell him that Mr. Watts, who had pulled out of the Stones’ fall tour because of an unspecified medical procedure, had taken a downturn.
Options: Reply To This Message•Quote This Message
Re: Charlie Watts Dies at 80
Posted by: MisterDDDD ()
Date: August 25, 2021 03:58
Lisa Fischer
@lisafischersing
·
8m
Rest in sweet peace #CharlieWatts My deepest condolences to The Watts Family, The Shepherd Family, The Rolling Stones Family &friends,&all who have been touched by his gifts to this world(I sadly embrace the circle of life. it’s my heart that’s slow to let go <Mending heart>)

Thank you so much for keeping the band as well as us fans rolling for so many years.

See you after the bridge someday —

Quote
Rokyfan
Charlie Watts was a man who lived his life the way he wanted, never seems to have hurt a fly and did nothing but bring joy and happiness to millions of people.

We celebrate a life like this. We don’t mourn for Charlie we mourn for ourselves who go on in a world a little darker, with this reminder that we’re all just a blink of an eye.

Well said.
And somehow i think Charlie knew how much we loved him

Options: Reply To This Message•Quote This Message
Re: Charlie Watts Dies at 80
Posted by: Stonesdude ()
Date: August 25, 2021 04:14
When I heard the news today I was devastated. We knew something had come up with his health but we were told he would be ok. I had trouble focusing on work so I took off on my motorcycle for a ride in the country to clear my head for an hour ride during lunch. I have a thumbdrive with a bunch of classic rock on it and it is set for shuffle. The first song was Zep, All of my Love. A nice tune to hear today. The second song was Shattered. It is a great example of Charlies drum skills and sound. Many songs don't have his drumming coming thru this strong. This is a good one to remember him by. Have a listen.