Goto Thread: Previous•Next
Goto: Forum List•Message List•New Topic•Search•Log In•***Print View
Goto Page: 12Next
Current Page: 1 of 2
OT: The rise and fall of Creem magazine
Posted by: dmay ()
Date: August 4, 2020 17:28
For some us, this was probably a must read back in the day, quite the opposite of Rolling Stone magazine which was becoming "so respectable". I still have Creem's special edition dedicated to the Stones - it's pictured in the article - packed away with other items from that time.

Quote
Elmo Lewis
Loved Creem and Hit Parader back in the day.

On the 7th day God created The Rolling Stones
Options: Reply To This Message•Quote This Message
Re: OT: The rise and fall of Creem magazine
Posted by: TKinOH ()
Date: August 4, 2020 20:08
Circus magazine rocked too, essential reading for the Hair Metal brethren, and the all-important tour dates in the pre-web days...

I won a contest in '85 through the short-lived Faces Rocks mag, another Metal rag of the time.

Got flown to meet OzzY and his band in April '86 up at Richfield Coliseum on the Ultimate Sin tour... first time on a plane on a snowy day from Dayton to Cleveland flyin' on an 18-seat twin prop... I deemed it the White Knuckle Express... scared the hell out of me!

Got after-show passes and hung out in the green room with OzzY, Jake and Sharon and met the other guys, Phil Soussan and the late Randy Castillo. Everyone was very cool, free swag and autographs and all! Never got my photo in the mag 'cause they couldn't find Mark Weiss to shoot some photos, but it was a great experience, and my only backstage opportunity so far!! Meeting and hanging with Metallica at the hotel afterwards was icing on the cake. Their onslaught was just starting with Master of Puppets having just been unleashed...

Options: Reply To This Message•Quote This Message
Re: OT: The rise and fall of Creem magazine
Posted by: jbwelda ()
Date: August 5, 2020 07:05
When I think of Creem magazine, I think of Lester Bangs. He wrote some funny shit. I didn't really care for most of the music the zine covered, but if Bangs was writing it, it was generally worth reading, for everything except maybe how the music was.

[www.amazon.com]’s+only+rock+‘n’+roll+magazine&qid=1596602125&s=books&sr=1-2
Options: Reply To This Message•Quote This Message
Re: OT: The rise and fall of Creem magazine
Posted by: spikenyc ()
Date: August 5, 2020 17:41
There will be a virtual premiere this Friday online. (at least here in the USA)
They are raffleing tickets for it here - 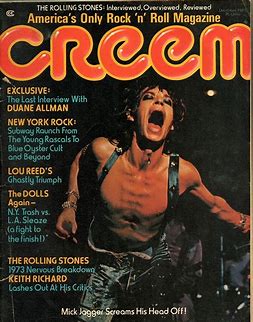 I believe it was this issue that had the "Mike and Barney" comic strip that was a review of Goat's Head Soup. It just nailed it, and was a perfect summation of fan reaction to that record.

[www.hometownlife.com]
Options: Reply To This Message•Quote This Message
Re: OT: The rise and fall of Creem magazine
Posted by: MileHigh ()
Date: August 7, 2020 08:03
It was the ultimate rock magazine for a 16-year-old kid. In 1975 I bought Creem and other rock magazines that had feature articles about the Stones Tour of the Americas. That was the rock and roll Information Highway back then!

And I seem to remember as a kid in the 60s there were "teen star" magazines like "Teen Beat" and stuff like that. Donny Osmond and Bobby Sherman and the like. Correct me if I am wrong but in the very early days of the Rolling Stones I think they were featured in those magazines. The "dreamy" pictures of handsome boys for the tween girls to get all excited over.
Options: Reply To This Message•Quote This Message
Re: OT: The rise and fall of Creem magazine
Posted by: StonedAsiaExile ()
Date: August 7, 2020 13:10

I had no idea who CB was when I was 14/15. I probably read the review but naturally remember nothing lol

I would love to have a read now!
Options: Reply To This Message•Quote This Message
Goto Page: 12Next
Current Page: 1 of 2