Theres a burnt copy of Robbed Blind in Depp's stuff

ROCKMAN
Options: Reply To This Message•Quote This Message
Re: Jonny Depp - Robbed Blind
Posted by: jbwelda ()
Date: July 25, 2020 04:44
Yeah I noticed that way back when, but I didn't see any further mention of it once the mud started slinging.

I thought there was an old Aussie bush game where you throw bottles at each other until one passes out from drinking all the beer. Would go on for days like that. Could that be a defense?

But ta be honest never wanted ta hang with them kinda dudes ....
The conversation was usually way too intelligent for me ..... hhhhasaaaa

jb
Options: Reply To This Message•Quote This Message
Re: Jonny Depp - Robbed Blind
Posted by: stone4ever ()
Date: July 25, 2020 11:47
Why would these two want to air their dirty laundry in public, I'm beginning to see why Keith distanced himself from these two horrors in about 2013.

Having said that it's becoming clear Johnny is no wife beater, having problems with drink and drugs doesn't make him a bad person, and it's nice to see him in great shape again, obviously he's cleaned up his act, good luck to him.
Options: Reply To This Message•Quote This Message
Re: Jonny Depp - Robbed Blind
Posted by: Rockman ()
Date: July 26, 2020 01:57

As the court case between the actor and his ex-wife nears its conclusion, an even nastier battle is taking place in public

By now those who actually wished to follow the libel war being waged by Johnny Depp against the Sun newspaper will know exactly who is said to have thrown what and who claims they didn’t do the appalling things others said they did. In truth, even readers who did not want to follow the ghastly twists and turns of the row between Depp and his former wife, Amber Heard, will also know more than they ever thought they would about an undisputedly miserable round of drug-taking, alcohol, rampant paranoia and wanton expenditure that took place five years ago.

Evidence in the four-week trial at the Royal Courts of Justice in The Strand has now all been laid before the judge. The Pirates of the Caribbean superstar, Depp, 57, has called witnesses in support of his claim against the publishers, News Group Newspapers, and the paper’s executive editor, Dan Wootton, over an article from April 2018 which called him a “wife beater” and referred to “overwhelming evidence” that he carried out violent attacks.

Heard, the 34-year-old star of Aquaman and the newspaper’s key witness, has submitted details of the 14 occasions during their relationship when she claims Depp assaulted her, each of which Depp denies. All that remains is for the barristers to make their final arguments tomorrow and Tuesday.

But what has been hidden while sensational accusations were going on inside the High Court is the other battle, fought outside: a conflict that has weaponised social media and the comment pages of newspapers, and deployed thousands of genuine fans around the world, as well as what Heard’s side now allege was a phalanx of cyberbots, edited video clips and dubious Twitter accounts. It has the hallmarks of a public relations surge; if it is, then it may be the biggest attempt yet to shore up a high profile reputation. This weekend a report by Bot Sentinel, a group that uses artificial intelligence to detect and track troll bots and allegedly untrustworthy Twitter accounts, has been made public that exposes the use of an autonomous bot which posted the phrase “Fire her from all her rolls[sic] blacklist this crazy liar”, while another read “I am starting a petition. To get Amber Heard blacklisted from Hollywood!”

It is possible that this meta-skirmish will have more impact than the outcome of the legal case. It could certainly change attitudes to taking civil action over domestic abuse claims, and it has already seriously blurred the boundaries between cross-examined evidence and the crueller court of popular opinion.

Lawyer Mark Stephens is one of those disinterested commentators who received many angry messages on Twitter after speaking to the media earlier this month about the sordid nature of the case.

“I’ve seen some high-profile cases, but I have never seen a response like this,” said Stephens, a media specialist at London law firm Howard Kennedy. “Whatever is proved in court, the images of Heard’s bruises are out there again, and there are so many vested interests, people that have a dog in the fight, on Depp’s side, that the campaigning online has felt one-sided.”

Labour MP Jess Phillips also received online abuse after she argued last weekend that it should not be necessary to prove you are of good character to be seen as the victim of domestic violence. Stephens was immediately suspicious about the social media accounts that were suddenly trolling him. “We have seen bots go to war before, and you learn to have doubts when you see that comments supporting Depp are popping up in real time, just as evidence is being produced in court,” said Stephens. “I have seen campaigns like it on a smaller scale between drug companies, and you can spot them because the same slightly inappropriate or clumsy language is used.”

Stephens examined many of the offending tweets and found some were generated by new accounts, he claims, while others had been set up to comment on this single issue in February or March. A third set of accounts had been dormant for a long period and had previously only commented on one other, unrelated issue.

“It does make you wonder,” said Stephens, who reported his findings to Twitter. “I would say that of about 100 accounts I alerted them to, 50 or 60 are now no longer there.”

The wider public defence of Depp is being conducted by his American lawyer Adam Waldman. His own Twitter account repeatedly denounced Heard’s witnesses with the words “In Memoriam”, a sinister phrase brought to the judge’s attention last week. Waldman has criticised Heard’s legal team for employing a PR company, Powerscourt, to handle her media.

And while Heard has not been pictured with a succession of floral bouquets on the steps of the court, her publicity has also been carefully thought through. Powerscourt have adopted a deliberately collaborative and low-key approach to winning hearts and minds.

Both sides have claimed a stellar line-up of celebrity supporters, apart from those such as Winona Ryder, Vanessa Paradis, Kate Moss, Elon Musk, James Franco and Paul Bettany, who have all been drawn into the legal evidence. Rock stars including Jeff Beck and Patti Smith are said to have rallied around Depp, while a group of leading British feminists including Baroness Helena Kennedy and the writer Kathy Lette have been associated with Heard’s cause. A suggestion that Cate Blanchett and Kylie Minogue also waded in by zooming into a London-based virtual morale-boosting event are reportedly false.

Heard needs vindication when the judge eventually comes to his conclusion, since she is set to face a similar ordeal in America, where Depp is suing The Washington Post over an article from December 2018 in which, without actually naming her ex-husband, she referred to herself as a survivor of domestic abuse. Depp is claiming damages of $50m.

The effort put in by Waldman and his team in Britain may therefore be a mere dress rehearsal.

For specialist Sebastian Burrows of Stowe Family Law this is a game with no winners. The impact of such a nasty dispute will linger, whatever the verdict, he argues.

“A decision is made on the basis of how two people appear in court, but regardless of what is ruled, what comes out can affect future rulings about character or childcare,” he said. “You also often find that in a domestic dispute the judge will eventually say there is fault on both sides, so everyone is damaged. This is why it can be a tactic for lawyers to argue that the very things their client is accused of are actually things they have been doing. A judge has to rely on having a good nose for the truth.”

The potentially arbitrary nature of the outcome in court makes the PR struggle to preserve public loyalty all the more crucial.

“In a civil case it all rests on the balance of probabilities, and it’s swayed to one side or the other when probability reaches 51%. Whatever the judge rules becomes fact,” said Burrows. “It sticks. And because judges want to avoid appeal, they take it seriously and try to get it right on the evidence in court.”

Burrows argues that while judges are trained not to be swayed by coverage, for the antagonists public perception can be the most important factor. Especially when a continued career in entertainment rests on that audience.

Stephens’s view, the one that prompted all the trolling, is that Depp’s claim is misguided. “Unless he has total victory on all counts, this means a loss or failure for him overall,” he said this weekend.

So who will win? Well, the usual answer is the lawyers themselves. Encouraging stars to take up arms and prove themselves right is costly and high risk, no matter how important the argument. If Heard’s evidence is disregarded by the judge, she will at least keep the good opinion of those who see her as a crusading survivor, prepared to look back repeatedly at an unlovely past. If Depp is not utterly exonerated, his Hollywood image as a rakish funster will be hard to maintain.

ROCKMAN
Options: Reply To This Message•Quote This Message
Re: Jonny Depp - Robbed Blind
Posted by: Hairball ()
Date: July 27, 2020 23:36
Lol...I thought a better matchup was DiCaprio "Pumpkinhead" vs. "Pirate" Depp with the younger Leo for the win....
This one seems a closer matchup though...maybe they'll both lose by beating each other to smithereens for a double knockout... 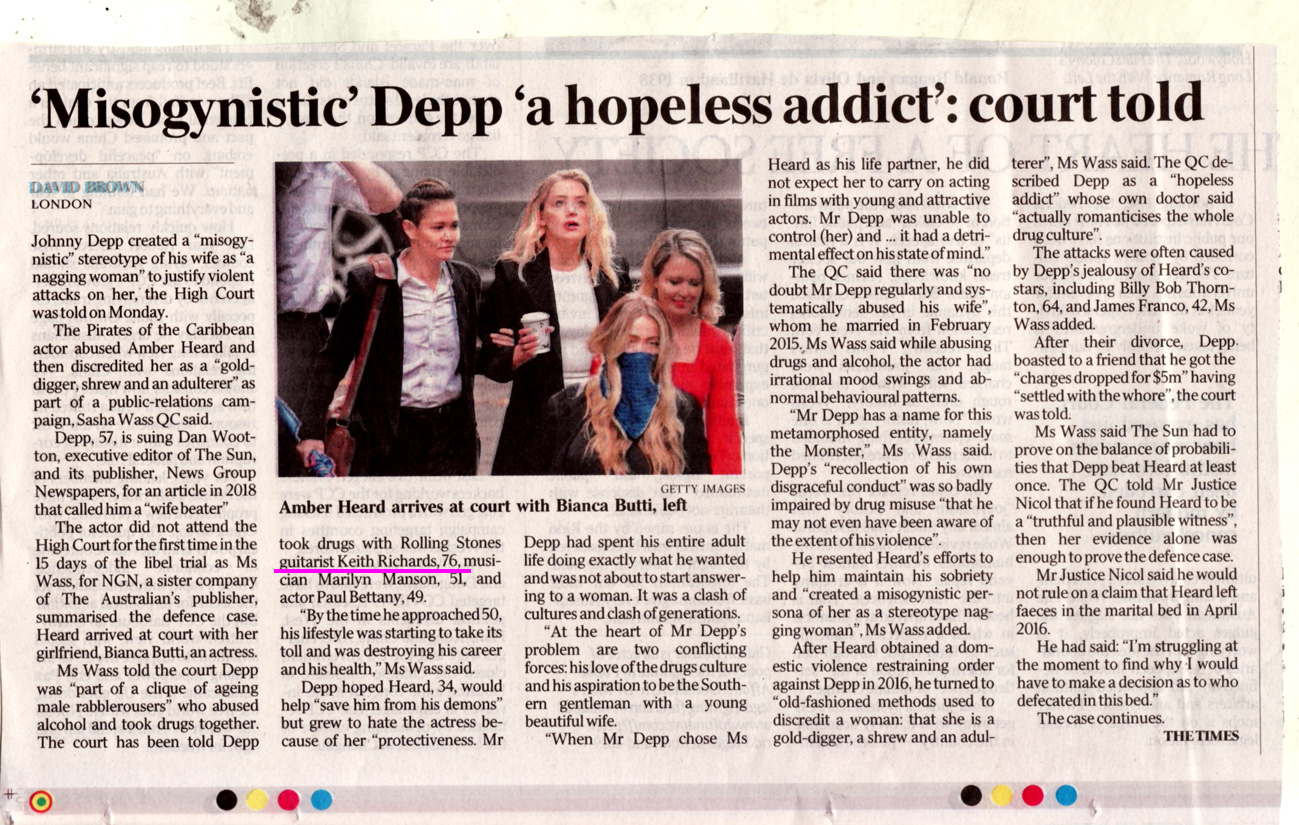 ROCKMAN
Options: Reply To This Message•Quote This Message
Re: Jonny Depp - Robbed Blind
Posted by: crawdaddy ()
Date: July 30, 2020 00:07
Sad,Sad, for no winner , just bad , bad ,for letting it all get to legal proceedings for all the world to see what happens..........or not happens in their life.