Trends for you
Rock · Trending
Keith Richards
6,518 Tweets
#ShadowsFX
Now Streaming FX on Hulu
Promoted by What We Do In The Shadows
Music and radio · Trending
Eddie Vedder
19.8K Tweets
Hip-hop and rap · Trending
Bobby Brown
8,097 Tweets
Trending in United States
Charlie Watts
Trending with: #RollingStones, The Rolling Stones
Options: Reply To This Message•Quote This Message
Re: The Rolling Stones joining One World - Together At Home, April 18
Posted by: Carnaby ()
Date: April 19, 2020 07:29 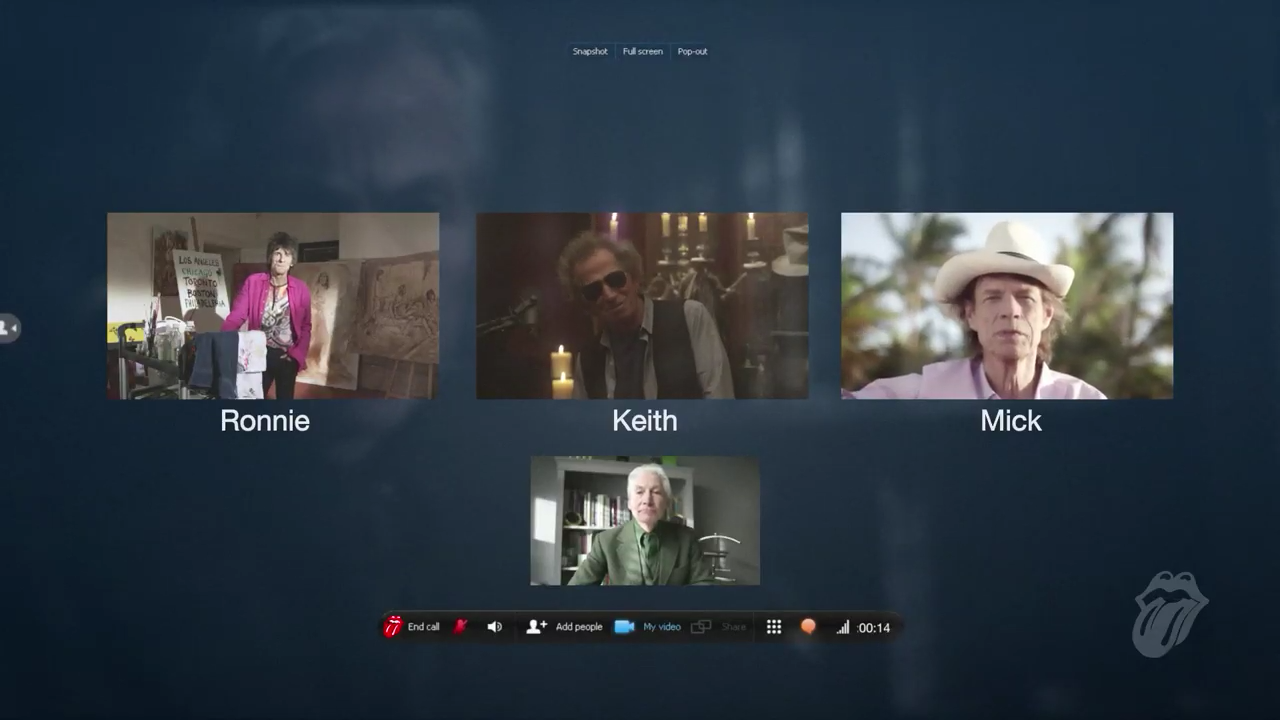 The selection of YCAGWYW can be viewed many ways. A message to the health care workers trying to make the best with scarce supplies, the people who are ill and fighting the virus, those stuck at home and/or laid off, the fans who were hoping to see them live this year but who are now on hold, and the Stones themselves who would undoubtedly prefer being able to tour but given the gravity of the situation need to stay isolated.

Quote
cyclist
So how was this arranged?

Perhaps an edited soundboard recording from a recent concert was the foundation, providing Charlie's drums and the samples we're so used to on tour, then Mick, Ronnie, and Keith recorded their parts?

Quote
TheBadRabbit
Keith looked like he didn't know the camera was on!

He won't switch into "live performance" mode till Pierre hands him a guitar and pats him on the shoulder.
(just kidding... I love you Keith!).

Quote
windmelody
Even if I often criticised Keith Richards I would like to defend him here - a video like that is a signal, but it is not a musical pleasure to get into. So I do not expect him to be too thrilled. Charlie Watts puts on a funny performance though, a bit of english humour can help through dark times.

Also, it looked like he was playing YCAGWYW in standard tuning for the first time in about half a century. He usually plays that one in open G, capo 5th fret.

As for the Jorma comparison, Jorma doesn't have huge arthritis knots on every knuckle as does Keith.

Quote
tioms
Some call it: 'A really nice video'???

So what did you expect? A new Brussels Affair?
Options: Reply To This Message•Quote This Message
Re: The Rolling Stones joining One World - Together At Home, April 18
Posted by: Rockman ()
Date: April 19, 2020 11:04
I loved Beyonce's hat and seein' The Stones ....

ROCKMAN
Options: Reply To This Message•Quote This Message
Re: The Rolling Stones joining One World - Together At Home, April 18
Posted by: Justin ()
Date: April 19, 2020 11:07
Official video

video: [www.youtube.com]
Options: Reply To This Message•Quote This Message
Re: The Rolling Stones joining One World - Together At Home, April 18
Posted by: bv ()
Date: April 19, 2020 11:09
Great tribute to the world and to the health workers. Sad to see the missing part, we all know how strong this song is when the crowd take over at the end.

Thanks for posting a direct link. A fun video and performance. Nothing too serious or spectacular, but apt for the occasion

Quote
rebelhipi
I think Charlie used some app where your hand movements are the drums.
Right side = cymbal.
center = snare ect.