Ronnie did his best ever Rambler solo and I don't know why or how but he just went into his own world over by Sasha and Bernard and played and played and played. Then as he was finished like a minute or two overtime he went over to Keith just like this was business as usual. It was not. It was amazing.

Charlie refused to go out into the rain when Mick tried to tease him out there during the presentations. No way Charlie said. He is the oldest so he is the boss when it comes to rain stuff.

Everything I had at the show is now up for drying. I had a poncho but I gave it to our new friend from Litauen. Great company at the show. My flight to Lima takes off at 6:25am that is in less than five hours from now. I just hope my cloths dry up a little before that, have to leave in 3 hours, may be two hours sleep. Have to check the rainy pictures first.

Set list wet. Money wet. My own few notes wet. Great with a hot shower and dry cloths, and to stay just half an hour walk from the venue.

Thank you Brazil for two weeks in Stonesland. I will never forget.

Bjornulf
Options: Reply To This Message•Quote This Message
Re: Porto Alegre Brazil 2-Mar-2016 Rolling Stones live updates
Posted by: chriseganstar ()
Date: March 3, 2016 06:29
My God, did it rain through the show tonight (about the same as Bergen a few years ago !!!) but what an awesome display from the Stones, absolutely faultless from start to finish. I'm sure the rain took care of the 19th song, not a surprise and an hours' walk back to the Hotel afterwards drenched through. Fabulous time here with Andre, Cristiano, Tony, Paul and a whole host of people that have made this trip truly special. Next stop for me, after flying home to the UK, Havana.......

Quote
35love
Ya made my night, and it's my b-day

Edited 3 time(s). Last edit at 2016-03-03 14:26 by maumau.
Options: Reply To This Message•Quote This Message
Re: Porto Alegre Brazil 2-Mar-2016 Rolling Stones live updates
Posted by: crawdaddy ()
Date: March 3, 2016 15:49
As Chris was saying, this was a fantastic performance by The Stones on a really special night.
In my opinion this was the best show out of the four in Brasil , which were all great anyway.
My new friend Marcelo from Argentina also said this about all the shows so far , and he will have seen all the shows in SA by the time he gets to Bogota.
The rain really started around Paint it Black I think. Maybe even earlier.
When you get wet in the rain and you just can't get any wetter, you just couldn't care less then.
Mick and Ronnie were wearing clothing and hats that they don't usually wear,but Keith just got wet like us and seemed to love it. They didn't spend any less time on the catwalk, including Sasha, who still even done her little dance in the rain in high heels.
Somebody mentioned she fell over at the final bow but I must have missed that.
I really do think the band really enjoyed it out there and they just carry on as usual in really adverse conditions.
Another thing I was very happy about with my four gigs in Brasil was the fact that my two concession Idosa tix for being an old geezer, got me into premium pista at Rio and PA half price. Not even interested in ID and stuff like that. Ticket scanned and I was in.

Quote
mtaylor
According to Folha de Sao Paulo, the best show in Brazil was in Porto Alegre. 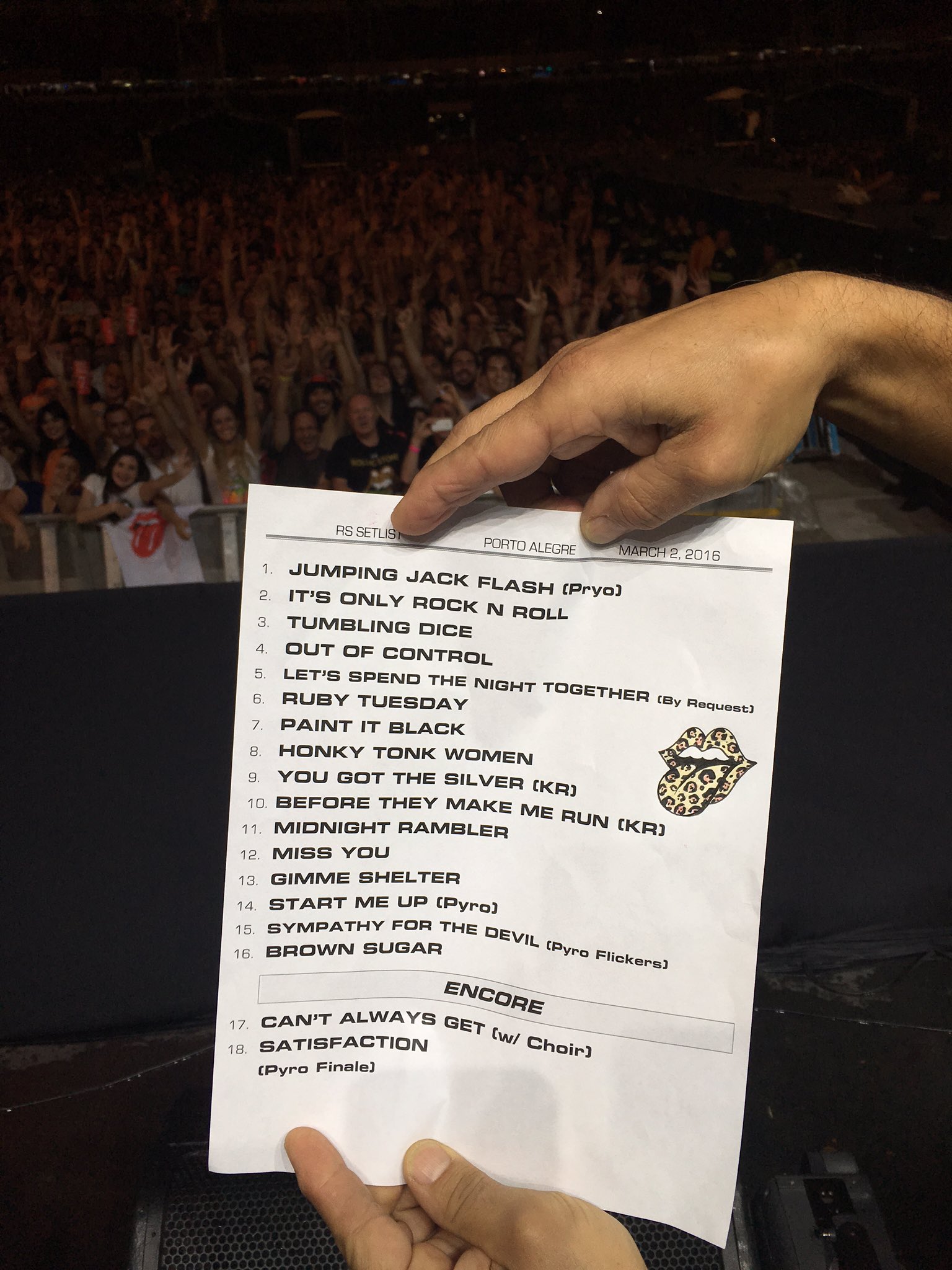 No pyro at the end. Guess the rain ahut that down.
Options: Reply To This Message•Quote This Message
Re: Porto Alegre Brazil 2-Mar-2016 Rolling Stones live updates
Posted by: aralla ()
Date: March 4, 2016 04:46
Amazing show last night in POA! Heavy rain couldn´t stop the greatest rock ´n´ roll band on earth. We were all absolutely wet, Mick, Keef and Ronnie too.
They really enjoy the show but a special mention to Mick, what a beautiful attitude, endurance and leadership!

Best show? Whatever...it doesn´t matter!
It was my last show of the emotional and intense Olé Tour.
Unforgotten!

Cristiano, thank you very much for getting a ticket for me.

Edited 1 time(s). Last edit at 2016-03-05 18:40 by SlippingAway.
Options: Reply To This Message•Quote This Message
Re: Porto Alegre Brazil 2-Mar-2016 Rolling Stones live updates
Posted by: Witness ()
Date: March 4, 2016 12:47
Now once again, only reading the setlist, this time I want to comment that it must have been a deeply fascinating sequence of songs to receive
"Let's Spend the Night Together"
"Ruby Tuesday"
and
"Paint It Black",
in a row, thereby obtaining a special kind of freshness about the songs.
Nice then also to have those three songs, followed by
"Honky Tonk Women". That is, one 60s singles session within the concert.
Options: Reply To This Message•Quote This Message
Rolling Stones - Porto Alegre, Brazil March 2 2016
Posted by: bye bye johnny ()
Date: March 4, 2016 15:51 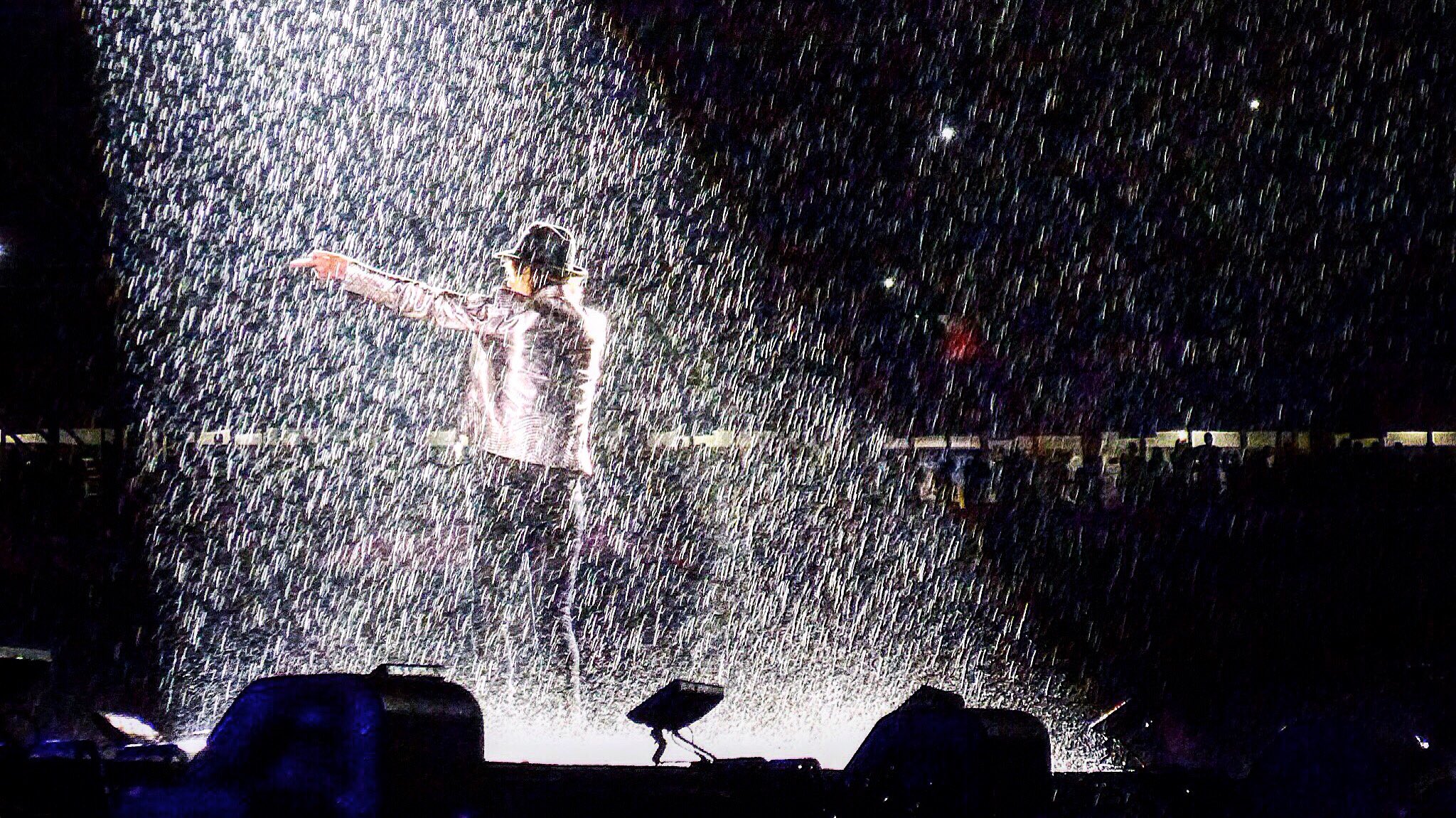