Quote
Hairball
It's been years since I've watched it, but I don't remember it being quite as negative as it's now portrayed to be.
All I can recall is a squabble between George and Paul over a guitar solo or something, and George comes off as a bit whiny about it all saying something like "then play it yourself"
Again, been years since I've watched it, so there might be more negativity than I can fully remember....maybe there's the weird Yoko vibe going on also...?
I have the vhs and a dvd boot copy in storage somewhere, so might have to start rummaging for it.

Nope, you're right. The negative aspect of it has frankly been overblown. There's that one argument in it like you say, but other than that its relatively calm and, frankly, a little boring if I remember correctly. The best part is the concert at the end. I don't remember Paul coming off any particularly worse than the rest of them. If anything, I remember the movie does a good job just portraying how much they were all over it. It was so forced and it just didn't work. Granted, I hope and it seems the Peter Jackson film will tell a different story, which I hope because I love the Let It Be album, but I'd argue with Paul that anything you can read online about that time paints a far worse picture of him than what's in the film. In the film its kinda just "we wanted to do an album this way, that didn't work. We moved to a new studio, that was better. Then we played this cool concert on the roof." Reading material which the Beatles themselves have widely related and made available to the public, provides a more accurate and interesting angle than the Let It Be film.

So while I think the Peter Jackson extravaganza is gonna render the original Let It Be film kinda meaningless, for historical purposes I absolutely think the original should be remastered and available for posterity. There's nothing in it that makes Paul look any worse than other things out there, and it'll always be something only die hards look for anyway, and its readily available for them now if they want it.

Agreed too that Paul doesn't quite get enough credit, or maybe the accurate credit, for the late era Beatles. It was never one man band, but they needed to lead at a certain point and Paul took up that mantle when no one else really wanted to. He tried to keep that thing going, I don't think for money, for sheer enjoyment of what it once was. For all the crap of Paul stepping on Let It Be with his first solo album, he was the last one that really wanted to step away from the group and do his own thing. He wanted the Beatles to keep working, and while there are times I think its right to criticize him for his overblowing of the Beatles legacy and maybe stuff to do with Sgt Peppers, in general it was a thankless job he did towards the end trying to keep them together. It was maybe all for naught, but I get his logic and I don't think he was trying to be the egomaniac he's portrayed as a lot (even though we all know he CAN be that way, and hey, arguably should be with all his genius).

"A fully restored version of the original Let It Be film will be made available at a later date" -- [SuperDeluxeEdition.com] .

I worry that you're depending a lot on that SuperDeLux article.

It's from MARCH 2020 which is a long time ago in terms of the development of home streaming and cinema release changes (Covid of course).

Yes, I agree it describes well what we'd all thought was going to happen. But I fear that the recent Disney+ announcements may replace the cinema plans and not simply adjust them. 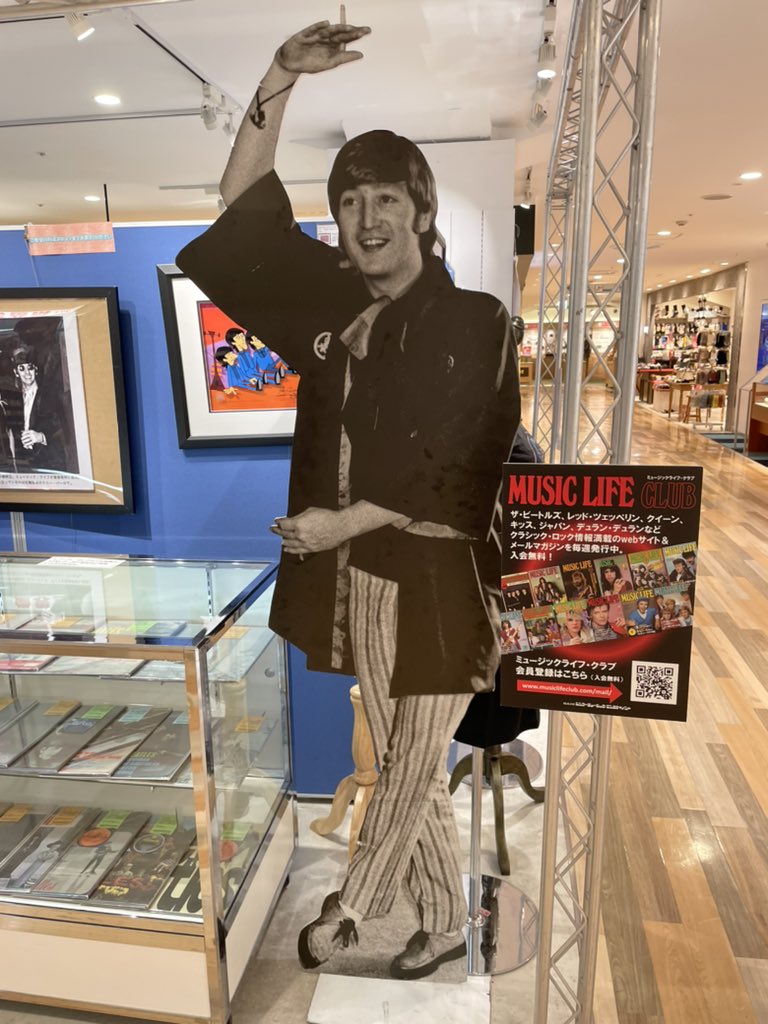 At a store opened to commemorate the 55th anniversary of the Beatles' arrival in Japan.
John was mimicking a popular cartoon character at the time.

Not to mention the state of anything paper buried in a "landfill" for sixty years.

He's still got boxes and boxes of em
from the Fab Four days ... thats why he's always so Hypo ...

ROCKMAN
Options: Reply To This Message•Quote This Message
Beatles vs Stones - and other Beatles stuff
Posted by: bye bye johnny ()
Date: June 30, 2021 23:33
50,000 Rare 'Butcher' Beatles Record Covers May Be Buried in MA Landfill

ROCKMAN
Options: Reply To This Message•Quote This Message
Re: Beatles vs Stones - and other Beatles stuff
Posted by: jbwelda ()
Date: July 1, 2021 00:39

That is an amazingly annoying website, but the story is interesting. I wouldn't be selling my first state cover for peanuts quite yet, sounds like those covers are beyond recovery being as how they were dumped into a waterfilled hole in the swampy reaches of the dump and then covered by bulldozer with tons of muddy dirt and debris. I am thinking even my beat third state cover is gonna look better than the best of that lot.

jb
Options: Reply To This Message•Quote This Message
Re: Beatles vs Stones - and other Beatles stuff
Posted by: Rockman ()
Date: July 1, 2021 00:41
I'm vegetarian so I cant
have that cover anywhere in The Bunker .....

ROCKMAN
Options: Reply To This Message•Quote This Message
Re: Beatles vs Stones - and other Beatles stuff
Posted by: treaclefingers ()
Date: July 1, 2021 01:26

Quote
Rockman
I'm vegetarian so I cant
have that cover anywhere in The Bunker .....

ROCKMAN
Options: Reply To This Message•Quote This Message
Re: Beatles vs Stones - and other Beatles stuff
Posted by: MisterDDDD ()
Date: July 8, 2021 14:29
Interesting video, mostly known info around here, but a couple surprises for me.

Top 10 Musicians Who Recorded With The Beatles & The Rolling Stones

Massive George Harrison ‘All Things Must Pass’ Box Due in August 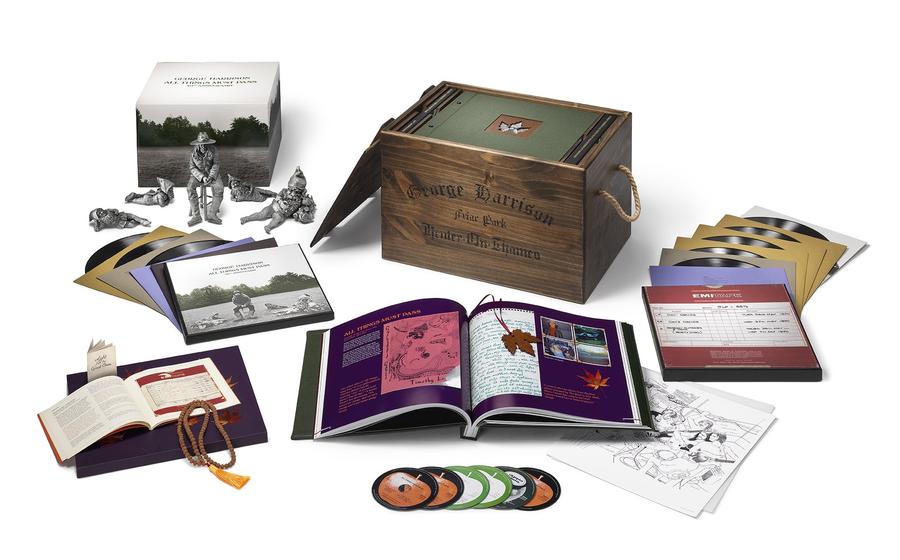 I’m sorry. It’s got SOME nice tracks, but it doesn’t warrant this type of obvious money grab

Massive George Harrison ‘All Things Must Pass’ Box Due in August

I’m sorry. It’s got SOME nice tracks, but it doesn’t warrant this type of obvious money grab

I loved this album when it came out and wore out the vinyl playing it so much on my turntable. I know there are rabid Beatle fans (with deeper pockets than me!) who will not hesitate to pluck down the cash in order to acquire these super deluxe editions, but I think this offering is a little excessive even for my tastes. To each his own I guess.
Options: Reply To This Message•Quote This Message
OT: All Things Must Pass 50th Anniversary
Posted by: kovach ()
Date: July 12, 2021 06:01
Looks interesting, especially the "super deluxe" version:

All Things Must Pass 50th Anniversary Edition
Options: Reply To This Message•Quote This Message
Re: OT: All Things Must Pass 50th Anniversary
Posted by: crholmstrom ()
Date: July 12, 2021 09:57
Can't wait to hear the new mix. Quite possibly my favorite Beatles associated project. I would love to have the blu-ray atmos mix but alas, budgetary limitations. I don't do vinyl as its a habit I can't afford anymore. Most likely I'll either get the 2 or 3 cd version. I remember as a young kid wanting the original but my dad took one look at the cover & was like "no f'n way". He definitely had redneck inclinations during that time. Later in his life his musical outlook got better & actually enjoyed some of the Beatles stuff. I was working virtually from his hospice room toward the end & would play him music all day. Some stuff I knew he liked, some he had no idea (he had dementia toward the end. It was rugged.). Strangely, he liked some of the mellower Flaming Lips material. Much to the consternation of his second wife & my sister (neither of whom do I speak to anymore), I manage to sneak "Do You Realize" into his funeral service as he liked that one. There were definitely some confused elderly people at the service!

Quote
Donnebr
Looks very well done but it’s got to be very expensive. Anyone have a price list for the US. Thanks

jb
Options: Reply To This Message•Quote This Message
Re: OT: All Things Must Pass 50th Anniversary
Posted by: Big Al ()
Date: July 13, 2021 08:39
The little figurines are babyish. Toys for man-boys, I’m afraid. Didn’t the super-deluxe Pink Floyd box-sets come with marbles? Expensive tat for ‘grown-ups’ who can’t think of anything worthwhile to invest in.

The music? Sure; that’s great!

Quote
24FPS
I'll have to wait for the Blu Ray Atmos Mix. My local library will have it but it might take a while. I just listened to Sgt. Pepper on Blu Ray from there. Strange how a new mix creates a whole different animal. The Blu Ray version puts everything right in your face. I always remembered Sgt. Pepper as being a bit removed.

I haven't heard the Sgt Pepper Atmos mix but have listened to the Abbey Road one. It's stunning!
Options: Reply To This Message•Quote This Message
Re: OT: All Things Must Pass 50th Anniversary
Posted by: Whale ()
Date: July 13, 2021 12:13

Quote
jbwelda
about a grand for that super uber deluxe interior one with the kool miniature statues.