It's always fun watching the Stones lose their virginity in a new country, especially one that's only a year old. And they don't get any prettier than Montenegro. I hesitate to sing its praises too loudly because it's just a matter of time before the coastal paradise gets overrun with tourists and the delicate infrastructure crumbles.

Mick seemed wired, definitely thrilled not be playing some enormodome for the 50th time. He was considerably more animated and energetic, and spoke to the crowd almost exclusively in its native tongue {Serbian? Montenegrin?}. He introduced "Ain't too Proud to Beg" by reciting the first line of the song. "Budva! Be good to me," he said in English after "I'll Go Crazy." And after Charlie was introduced -- as "the mad man of Montenegro" -- and started playing a drum solo, Mick sang scat alongside him. He dubbed Ronnie "the beast of Budva."

Keith, on the other hand, was more taciturn. "I don't speak the lingo, so on with the show. I love you all, y'know," he said. "You Got the Silver" was great, but "Wanna Hold You" was perhaps something that only Doris would have loved. "Satisfaction" was played on the small stage, taking flight only after Keith stopped Charlie during the intro and started again. The tightly packed crowd sang the chorus over and over, drowning out Mick's verses.

Being relatively new to the Stones game, the crowd wasn't completely versed in the customs, such as returning Mick's "Oh yeah!" calls during "Midnight Rambler" -- a song that boasted an increasingly rare "and it hurts!" sign-off. And the whoops during "Brown Sugar" were muted.

The people were beautiful, though, coming in from Serbia, Albania and Russia. Lots of scantily clad bronzed hardbodies in hotpants, basking in the heat and later the cool marine breeze. And as for the women!

The setting was sublime. The stage was dwarfed by steep hillsides behind and in front, and was flanked on Keith's side by trees and on Ronnie's by the unseen beach. Yes, the show wasn't actually on the beach. It was on a gravel stretch maybe 200 yards away from the water. Playing on a big field imbues the concert with a sense of community, something certainly lacking at big stadiums with whole sections of illuminated empty seats. The concert wasn't really in Budva either, perhaps 5 km away from the city. {For those who are keeping count, I walked half the 23 km back to my place in Tivat after the show before a taxi took pity on me.} 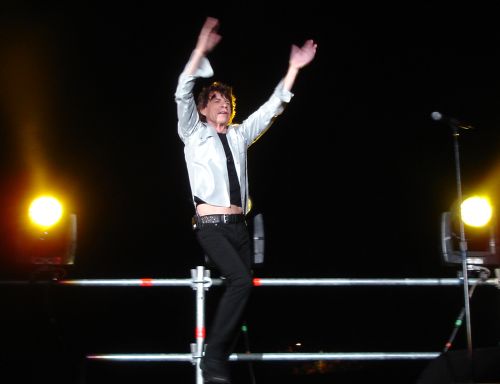 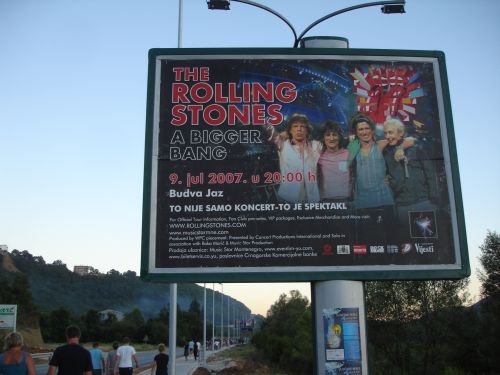 I’m old Stones fan (58); my first Stones concerts were Zagreb ’76, and I’m Serb. I wanted to see Stones in Budva because it’s near, but before trip I had to answer to most horrible question in the world:’ Stones coming to your town Belgrade, 1,5 kilometers air line close to your home, so why you going to Budva?’’ (How to explain these to Stones nonfans?)

Montenegro has population about 650.000 and it’s smallest country where Stones had been ever, as I remember well. Serbia & Montenegro lived in union more then 85 years, and we both have same roots, names and language. More then year ago Montenegrins wanted to separate with Serbia and it was clever decision (for both!) Budva is tourist capital for this country, and they desperately wanted Stones therefore tourist and political promotion. But for ordinary Montenegrins Stones, naturally, means nothing.

So you could bye tickets for cheap prices on the day of the concert (only 32 EUR), and some rumors is that tickets shared for free in gas stations, markets etc. I repeat its rumors. Officials said that in concerts were 62.000, papers about 55.000 and truth is that there was about 40-45.000. In these circumstances it’s equal to Chinese population. Organization was really excellent. But best of all is that concert was in Jaz beach, and sea is about 150 meters far from place. For me it’s good opportunity to swim 20 min. before Stones and its fine way to escape from boring opening acts. I mean that on Copacabana wasn’t like this! Disadvantage was that only few Stones fans used this opportunity. You needed only hot towel and concert tickets! O.K. let’s go on concert. First of all biggest surprise – Stones played only 18 songs! (Little less than 2 hours!!!)

Sec – (I have hundreds and hundreds Stones boots and never, absolutely never Sir Mick Jagger didn’t spoke in domestic language like on this concert. Never! I know that he is good in French, probably he spoke Spanish but in Budva he talked too much this Serbo-Croatian, or (after Hague trial) BCS or whatever this language is. And mostly he even didn’t need teleprompter!!! Once he said ‘’Nas BUBNJAR Charlie Watts’’, which means ‘’Our DRUMMER C.W.’’. And this word is so hard to pronounce for domestic people. Also he said in Serbo-Croatian ‘’Drago nam je sto smo na ovom prostoru’’, which means ‘’we like to be in this area’’. And you have to make distinction because he didn’t say ‘’We like to be on this country’’. Because (and he mentioned) there were Croatians, Serbs, Albanians and Russians (these lasts I didn’t saw any!). But also there were Serbs and Croats from Bosnia and Bosnians, too. (Thereabout as lyric in song ‘’Sand it To Me’’- only not Aliens.) Keith Richards in one moment congratulated Mick to good knowing of foreign languages and (thanks god) didn’t say this boring phrase ‘’Good to be here, good to be everywhere’’. Before his set he said something like that he don’t speak like Mick this language and salute to the public in his memorable touching and cognizable way.

Long time ago, as I remember well in late 70’s Mick Jagger had stupid idea to change name of the band to ‘’Mick Jagger and The Rolling Stones’’. After this tour name of the band must be ‘’Mick Jagger And His Fabulous The Rolling Stones’’, because (unfortunately) Mick gave to the band all – direction, emotion and creativity. Keith gives nostalgia and his incredible image. For Ron good is that he could share profit last few years. And also is fine that Charlie is with them because Stones without him never be complete. (But of course could exist). Point is seems that Keith is in bad condition. This mean: he is sweet still, he looks rebellious sometimes, even in moments he is real Keith Richards whose after 18 said ‘’Yes sir’’ to no one (except heroin), but life is short and limited. I’m shame to say that in Budva, even in ‘’Paint It Black’’ he made mistake with simple opening. Withal bootlegs will be, and if I had wrong blame it on me.

Others: Lisa & Bernard good as always, Blondie probably had to be there and brass section employing is not like on tours before. For example with them ‘’Ain’t Too Proud To Beg’’ was better than on original. Daryl Jones? I saw him when introduction was, and he is better then Bill Wyman, only. And Chuck (with his /what to say about/’Save The Tree’ T shirt) looks like he never herd for Chuck Berry’s Johnny Johnston. This means that piano could sound more basic and r&r. Set: Good! Especially ‘Rambler’ and ‘YCAGWYW’. But only Micks and Chuck knows why ‘Satisfaction’ was on small stage. ‘You Got The Silver’ was capela as in last few concerts, and highlights was as always ‘JJF’.

At last question is what will be in Belgrade? For Stones set probably ‘CYHMK’ and some old song like ‘Angie’. For attendance I have to say that young public have this Exit festival which happening in same time. And this festival is Serbian youth brand. Also here were 15 days before Red Hot Chilly Peppers and they played only 14 songs in front of 100.000 people and this was big disappointing for the young’s. Peppers, out of space, thought that it was festival; organization seduced young people and they, because don’t know who Stones are, expect short concert. Advertising was bad; government only thinking about Kosovo (not what the our people will eat) and for me success is concert itself... BTW show was phanthastic!!!

For exclusive reports and unique high quality pictures from the Rolling Stones tour and more see the IORR magazines.