For this show we had :
- “Live At Sala Zeleste” (Goldmasters 1999) and “Barcelona 921209”, both coming from the same very good source. Gimme Shelter’ appeared as bonus on “Main Offender Rehearsals” (Rogue 005) - this version seems to come from a media report (TV or radio, because a DJ's voice seems to start at the end of the song): I decided to keep it and added it as a bonus.
I reworked the transitions: now the tracks start with the song.
I deleted defaults in ‘Big Enough’ at 3’49 & 3’54 and in the starts of ‘Running Too Deep’ and ‘Yap Yap’, in the end of ‘Eileen’ and in the beginning of ‘Connection'.
I also deleted two seconds which were repeated between ‘Before They Make Me Run’ and the band introduction.
Because of a gap between ‘Running Too Deep’ and ‘Yap Yap’ I decided to do the separation for the two cds at this point.,
Note:
- a fade in/out between ‘I Could Have Stood You Up’ and ‘Happy’ (probably due to the change of the tape)
- a fade in/out before ‘Connection’ (encore break)
As usual all the infos are taken from The Complete Works Of The Rolling Stones database by Nico Zentgraf: [www.nzentgraf.de] 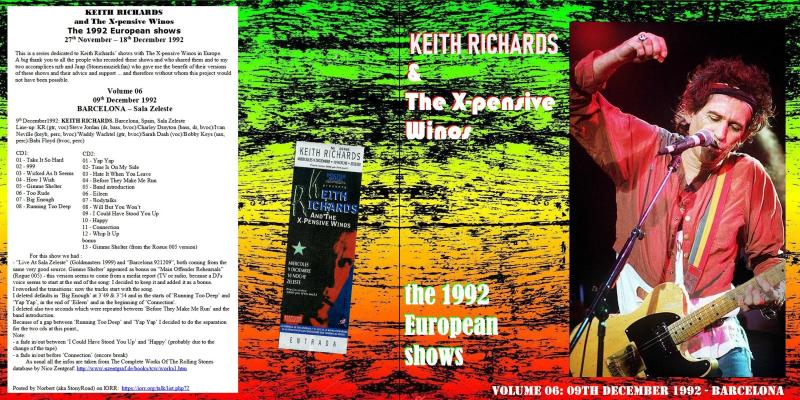 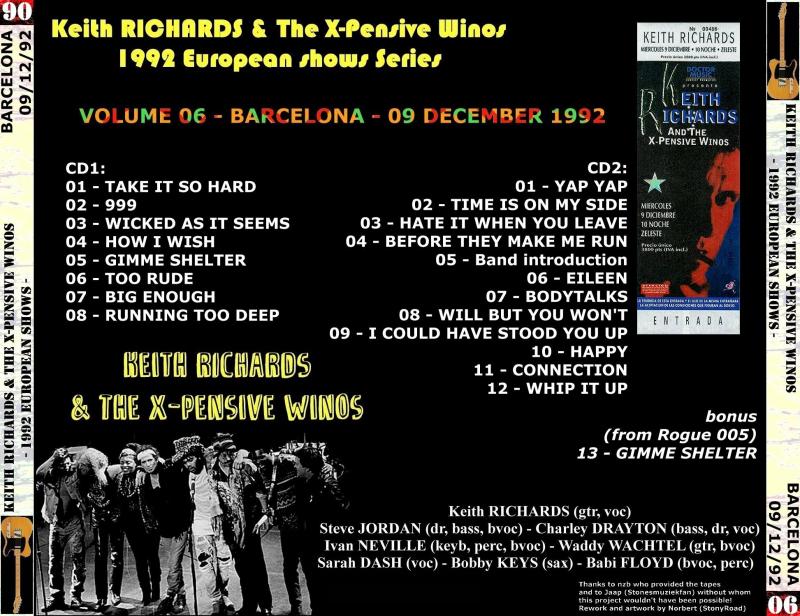 Thanks a lot I will check it to see if it's interesting!

You're right it's the same source as the version I posted but better: I advise to download it to complete this collection!
But for the show of 10 (which I will post tomorrow) it's not the same source and my version is less saturated than that posted on Dime!
Merci encore!
N.
Options: Reply To This Message•Quote This Message
Re: POST: Keith RICHARDS & Winos - 1992 European Shows Series - Vol 06 - 09 December 1992 - Barcelona
Posted by: britstones ()
Date: October 12, 2021 19:29
Thank you!
Options: Reply To This Message•Quote This Message