For this show we have three versions
- the one posted by Heiloobaas: noted (H

. It has the best sound but is incomplete. There are only certain titles (8) and not in the correct order. All the segments (banter etc…) between the titles are deleted as well as sometimes the first seconds of the songs.
- mine noted (§) has the correct sound but consists only of the second part of the show: from the middle of "Goin 'South" (incidentally cut into three parts!) onwards.
- the version of nzb: noted (nzb). Is the most complete version, even if it misses the end of "Little Red Rooster". But the sound is worse than the previous 2 and the speed too fast (+ 2.48%).
So I made a mix of the three sources to get the full show with the best sound possible. Of course the passage from one source to another is a bit annoying but I did my best (which took me a lot of time) so I hope others will appreciate it.
For example HB’s version for “You Gotta Move” was very incomplete (the long intro was cut and the ending part too). Now this rebuilt version include the great intro, the “Catfish Blues” segment and is around 8 minutes longer!
For the front and back covers I used pics coming from a review of the show (see in the document file).

A big thanks to my usual partners in crime nzb and Jaap (Stonesmuziekfan) who gave critics and advise regarding my work and to Heiloobaas who posted this recordings at IORR and allowed me to use it.. 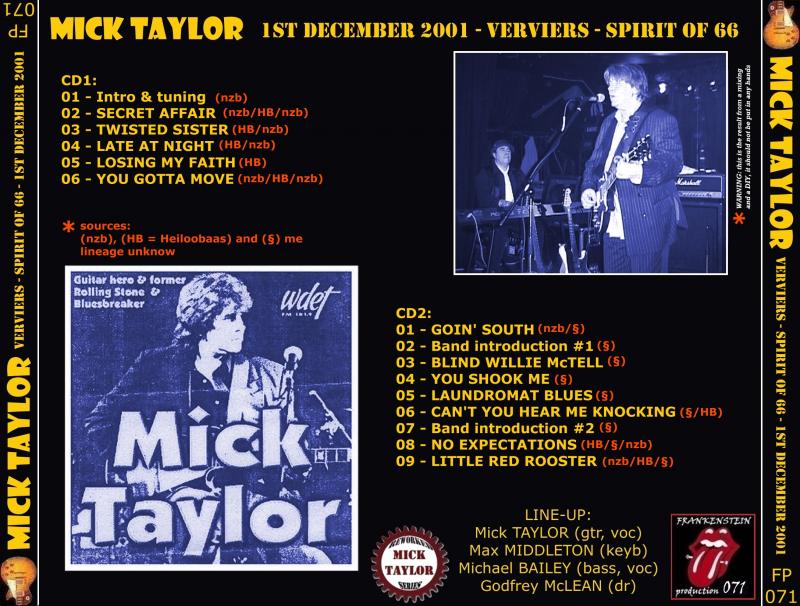 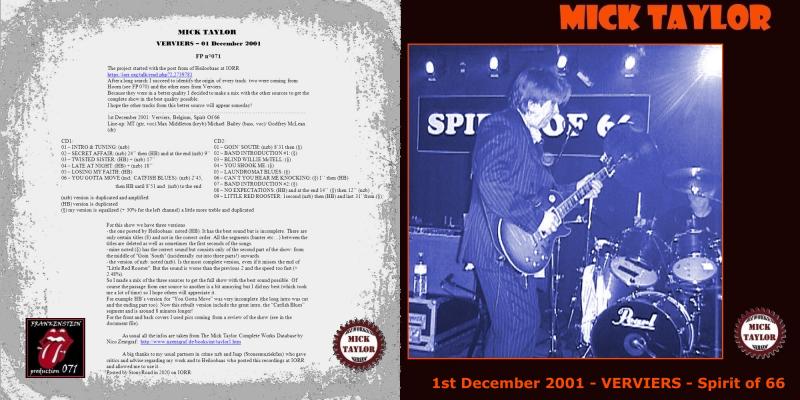 Posted by StonyRoad in 2020 on IORR
link valid until 16/06/20 (don't ask for a repost)
[we.tl]
oops, i forgot to delete the "mix" folder which contains a mix of 2 versions: you can delete or keep it but it is not mentioned on the cover! it's a kind of "hidden piece"!

and don't forget if you have a personal recording email me

Norbert
email: stonyroad58@gmail.com
Options: Reply To This Message•Quote This Message
Re: POST: Mick TAYLOR: 01 December 2001 - VERVIERS - FP 071 (mix from 3 sources)
Posted by: Quique-stone ()
Date: June 9, 2020 10:57
Thanks a lot for working on this show Norbert!
Also for the complete details given and the great covers!

"oops, i forgot to delete the "mix" folder which contains a mix of 2 versions: you can delete or keep it but it is not mentioned on the cover! it's a kind of "hidden piece"! "