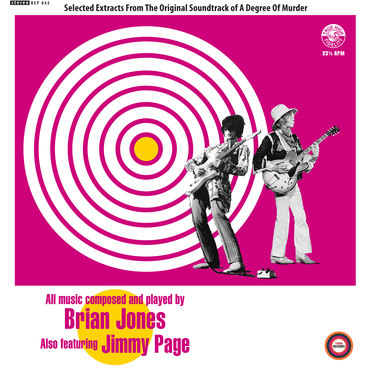 This release seems to have gone under the radar somewhat. It's only extracts admittedly, but still nice to see something from Brian.
Apologies, and please delete if this has already been mentioned here - I couldn't find a similar post.

"In early 1967 Brian Jones found time in between Stones tours to record the soundtrack to the film Mord und Totschlag, starring his then- partner Anita Pallenberg as Marie. In the film Marie shoots her ex-boyfriend with his own gun after he attempts to beat her up. Instead of reporting this to the police she hires two men to help her dump the body in a construction site near an autobahn. Although the film was entered into the 1967 Cannes Film Festival it is known today chiefly for its soundtrack. The tracks on this EP provide you with the musical highlights from the soundtrack, which has never officially been released. Talking to Rolling Stone in 2012 collaborator Jimmy Page said "Brian knew what he was doing. It was quite beautiful. Some of it was made up at the time; some of it was stuff I was augmenting with him. I was definitely playing with the violin bow. Brian had this guitar that had a volume pedal – he could get gunshots with it. There was a Mellotron there. He was moving forward with ideas."
All music composed and played by Brian Jones on the following instruments: sitar, organ, guitar, recorder, bass, banjo, dulcimer, harmonica. Also featuring Jimmy Page: guitars; Nicky Hopkins: piano; Kenney Jones: drums; Peter Gosling: keyboards, Mellotron, vocals; Mike Leander: orchestra; Glyn Johns: engineering. Recorded January - February 1967 @ IBC and Olympic Studios, London. Broadcast on ZDF TV 1969."

Quote
johnnythunders
It has been discussed in the Hot Stuff section

Quote
VoodooLounge13
So nobody knows if the soundtrack is included as say a bonus audio portion or something on either version that was released? Apparently there’s a Blu-ray and a Blu-ray/DVD.

Quote
VoodooLounge13
No I’m inquiring about the video release. It has been released on Blu-ray so I’m wondering if the soundtrack is a part of that?

Quote
VoodooLounge13
OK thanks. When you say the tapes are lost, were they part of the Universal fire from a few years back, or they've just been misplaced somewhere?