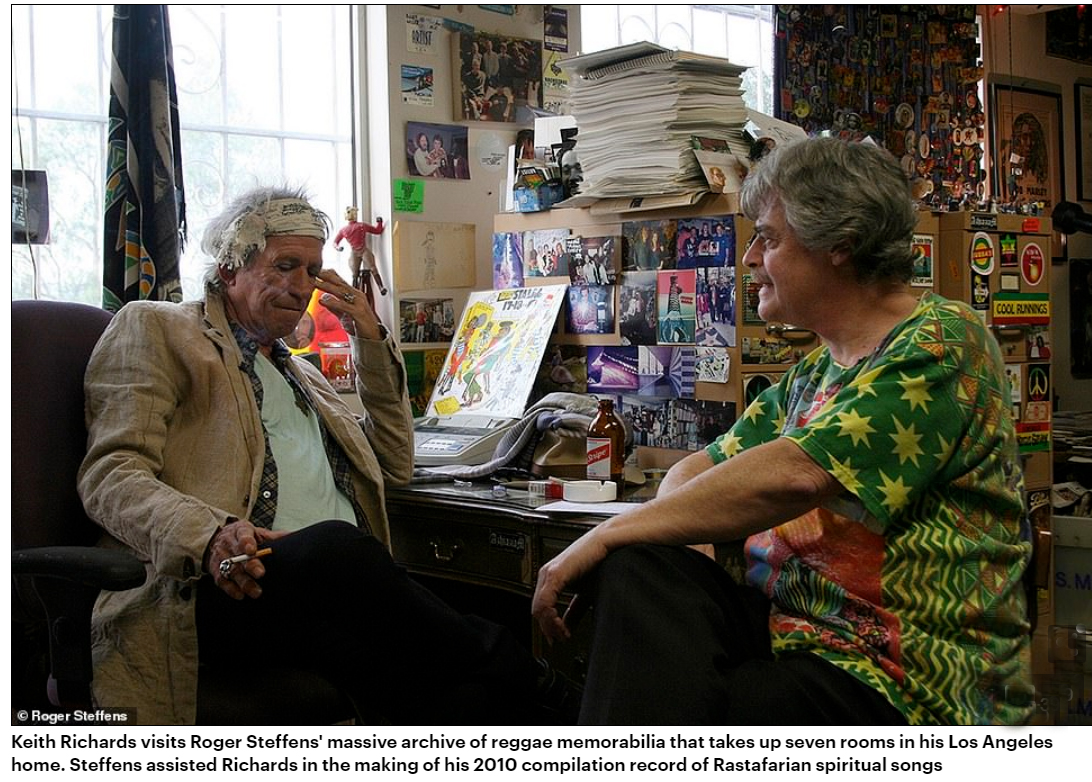 ROCKMAN
Options: Reply To This Message•Quote This Message
Re: Stones Reggae
Posted by: jbwelda ()
Date: June 8, 2021 01:39
You know KR is someone special when Ras Rojah lets him smoke tobacco in his home.

Rockman still on the move, just had Rogers land line and I don't think he bothers with that anymore, put out a feeler for his cell number. Should hear back later this evening.

Quote
DandelionPowderman
It is a stretch, but the last part of Sweet Black Angel has an "island sound", at least - with the marimbas and the groove there. It's not pure reggae, though

Here's a post I wrote about this song some years ago.

On Exile On Main Street we are literally spoilt for choice for exceptional songs and Sweet Black Angel is certainly one of them.

For starters they have created here an original music form – part country blues, part calypso, part hillbilly folk – that is quite unique. Usually you can tell right away who or what has inspired a Stones’ song but this is most definitely music of their own devising and a great example of the wonderful melting pot of primarily roots American music that is Exile On Main Street.

It’s also one of the most political songs the band have ever written – almost certainly Mick’s lyrics and this black consciousness inspired by his recent affair with Marsha Hunt.

Was there any need for the 'n' word in the song? I'm not so sure and I doubt whether, written today, Jagger would have used it. It certainly doesn't add any gravitas to the already controversial lyrics.

And despite the heaviness of the lyrics about the murder rap on black activist Angela Davis the music has an incredible warmth, like a campfire song with the sweetest sounding acoustic guitars, that amazing percussion including Mick’s harp playing, a jew’s harp, scraper and Charlie’s cowbell. You're immediately transported to another place - for me it's a backwoods Louisiana bayou with frogs croaking, crickets chirping and a jug of hooch being passed around in the sweet summer moonshine.

And then of course there’s Keith’s backup singing. I don’t think Keith was ever in better voice then on Exile, those high register harmonies are all over this album and here they lend the song a sweetness. And let’s not forget that beautiful, underlying marimba playing that comes in just towards the end played by Amyl Nitrate, otherwise known as Richard ‘Didymus’ Washington, from Dr John’s band.
Options: Reply To This Message•Quote This Message
Re: Stones Reggae
Posted by: DandelionPowderman ()
Date: June 8, 2021 13:45

jb
Options: Reply To This Message•Quote This Message
Re: Stones Reggae
Posted by: Rockman ()
Date: June 9, 2021 00:18
... ride ya scooter around ta Roger's
and see if ya can get that early Keef interview

ROCKMAN
Options: Reply To This Message•Quote This Message
Re: Stones Reggae
Posted by: jbwelda ()
Date: June 9, 2021 02:33
Map of Tasmania, man that's funny. Roger would appreciate it too, believe me.

Supposed to be sign of the Trinity but its difficult to form properly sometimes.

I would Rockman, but he's about 400 miles away from me. I think he might be out on the road but hard to imagine with the covid thing. Got my friend finding me his cell number. It would be a lot easier to just go over there if I was a little bit closer. Gonna see if I can get a copy of both interviews. That might happen. At least a link to the first one, the more I think about it the more I am sure you are right.

It phone interview with Keith ... split into three parts

ROCKMAN
Options: Reply To This Message•Quote This Message
Re: Stones Reggae
Posted by: bitusa2012 ()
Date: June 9, 2021 11:53
Whilst I SINCERELY believe the Stones inhabit every genre of music they play to the extent they ARE OF that genre, reggae to me is the least genuine, non authentic style they play.

Rod
Options: Reply To This Message•Quote This Message
Re: Stones Reggae
Posted by: jbwelda ()
Date: June 9, 2021 19:47
Got a response to my email this AM, told me to call him on number I already did, lets see how this goes.

ROCKMAN
Options: Reply To This Message•Quote This Message
Re: Stones Reggae
Posted by: schillid ()
Date: June 10, 2021 00:08
I was at this show at MSG in NYC in 2005 ... at the time I thought that this arrangement of 19th Nervous Breakdown was kinda reggae-ish ... Not so sure now tho

Peter Tosh was the front man of the Wailers? Really?

"Every single song on the list is a pure party-starting jam." Really?

Chose probably the weakest Gregory Isaacs song from the period (he had plenty of weaker stuff later on, sure).


what a stupid article. Next.