Been a few different members but still going strong ....

Well, not exactly, because they started as The Golden Earrings and with quite a different setting they changed to Golden Earring years later. Kooymans and Gerritsen were there as of 1961.
Some say that the Stones started of in 1961 as Little Boy Blue and The Blues boys (rubbish off course ...).
U2 is as of 1978 (before that they were named Feedback and included some other members ... according to Wikipedia).
Some say The Beach Boys, originally named The Pendletones, (1961) are still around (Mike Love and some unknown guys, also rubbish off course).

Some bands were out of site for decades and suddenly turned up as "revival". Revival is not the same as survival, or?

The longest surviving band ... it's all in the mind of the beholder or?

Been a few different members but still going strong ....

Charlie didn't join until 1963. Don't forget the changes from Jones to Taylor to Wood in just 5 or 6 years and Bill leaving in 1993. Only Mick and Keith have been members throughout, though Charlie got on board early on, as did Bill, though neither right at the very beginning. So just like the Who, the Stones aren't quite the same either, though the core song-writing partnership remains intact.

The Who did a farewell Tour in 1982, reformed for a one off 2-3 song LiveAid slot at Wembley in 1985 (marred by a technical balls up when they went off air) then toured again with another new drummer in 1989. 2 albums since 1982 is even less than the Stones' output!

The longest big time surviving band with no line up changes I can think of is U2, although I believe the Edge's brother was a member in their very early pre fame days.

Quote
Taylor1
Is Golden Earring the band that had a really good song called Radar Love? 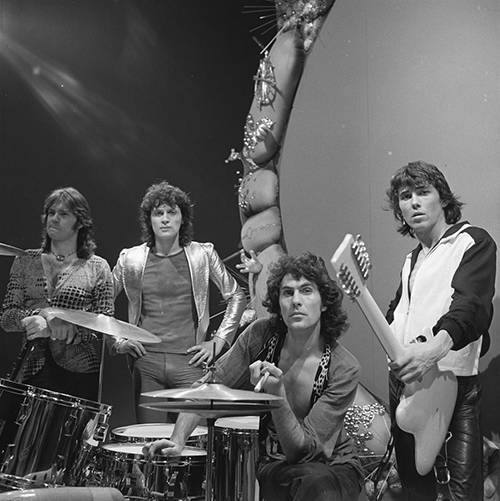 d.f
Options: Reply To This Message•Quote This Message
Re: Longest surviving band
Posted by: PaintMonkeyManBlack ()
Date: November 24, 2020 15:41
Golden Earring is really good, saw them a lot of times. Great band (still are!)

On topic: it's not about the past, it's about whats left in the tank
Options: Reply To This Message•Quote This Message
Re: Longest surviving band
Posted by: slewan ()
Date: November 24, 2020 16:03
ZZ Top comes to my mind – same line-up since 1969!

The United States Marine Band has been around since 1798

Longest surviving bands in Germany beside this will probably be Tangerine Dream - they always pass on (replicate) their musical DNA to subsequent members. And Kraftwerk - they're no Band, they're a Concept and their Music will in future be played by the Robots ....

Options: Reply To This Message•Quote This Message
Re: Longest surviving band
Posted by: MileHigh ()
Date: November 24, 2020 16:58
I think if you qualify it by saying 50% or more original members then it may be the Stones. 1963 until today.

We are still using a loose definition of a "band". The Stones are more of an entity than a band.
Options: Reply To This Message•Quote This Message
Re: Longest surviving band
Posted by: MKjan ()
Date: November 24, 2020 16:58

We can't really be sure it's been the same line-up

Options: Reply To This Message•Quote This Message
Re: Longest surviving band
Posted by: walkingthedog ()
Date: November 24, 2020 18:28

True, but the first Golden Earrings record came in 1965. Do the years
13 and 15 year old George and Rinus were rehearsing in George's bedroom
really count ? Love Golden Earring, though.
Options: Reply To This Message•Quote This Message
Re: Longest surviving band
Posted by: georgie48 ()
Date: November 24, 2020 20:17

True, but the first Golden Earrings record came in 1965. Do the years
13 and 15 year old George and Rinus were rehearsing in George's bedroom
really count ? Love Golden Earring, though.

The same with the Beatles. Before John allowed Paul to join the Querymen in 1958, the two of them already rehearsed in John's bedroom in his aunties house for some time. Many things could have happened before the actual Beatles were formed ... with Pete Best and Stuart Sutcliffe.
1957, 1958, 1961 ... where to start?

On topic: it's not about the past, it's about whats left in the tank

Also off topic--I saw Golden Earring open for Bob Marley, and at the end the drummer did a forward flip over the drums and stuck the landing.