It's a toss-up...
MetLife stadium is close to Manhattan, so a bit of rush hour traffic on a weekday is typical and won't make much difference. Actually, rush hour traffic volume is much less during summer months.

The potential problems with either mode of mass transit is hard to predict: Equipment breaking down, roadway collision... scheduling screw ups, weather conditions.

Quote
forsure
Does anyone have the lucky dip links for these 2 shows?

I'm getting quite excited now... not long to go! 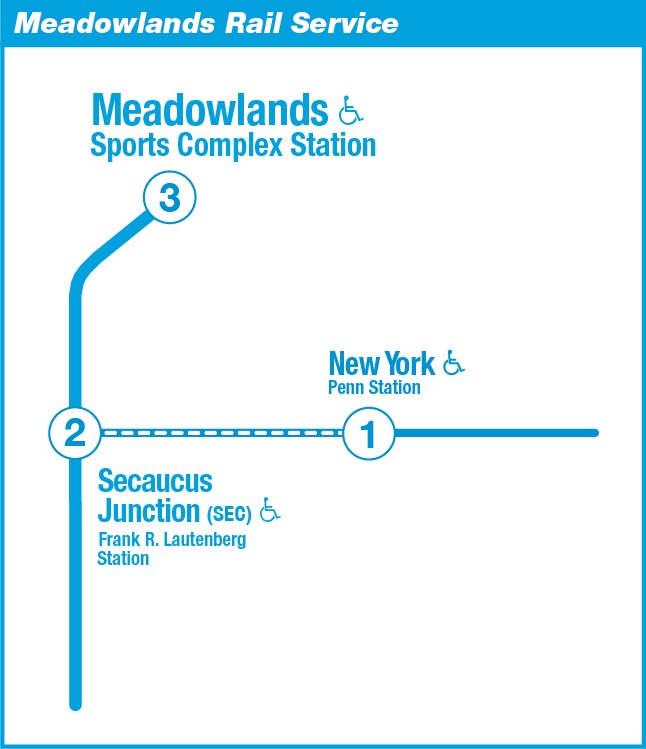 Customers may take any NJ TRANSIT train that stops at Secaucus Junction and then transfer to special Meadowlands-bound trains.

Departure boards at Penn Station New York will display SEC on trains that stop at Secaucus.

Customers must take trains to Secaucus Junction and then transfer to any NJ TRANSIT train traveling toward New York." 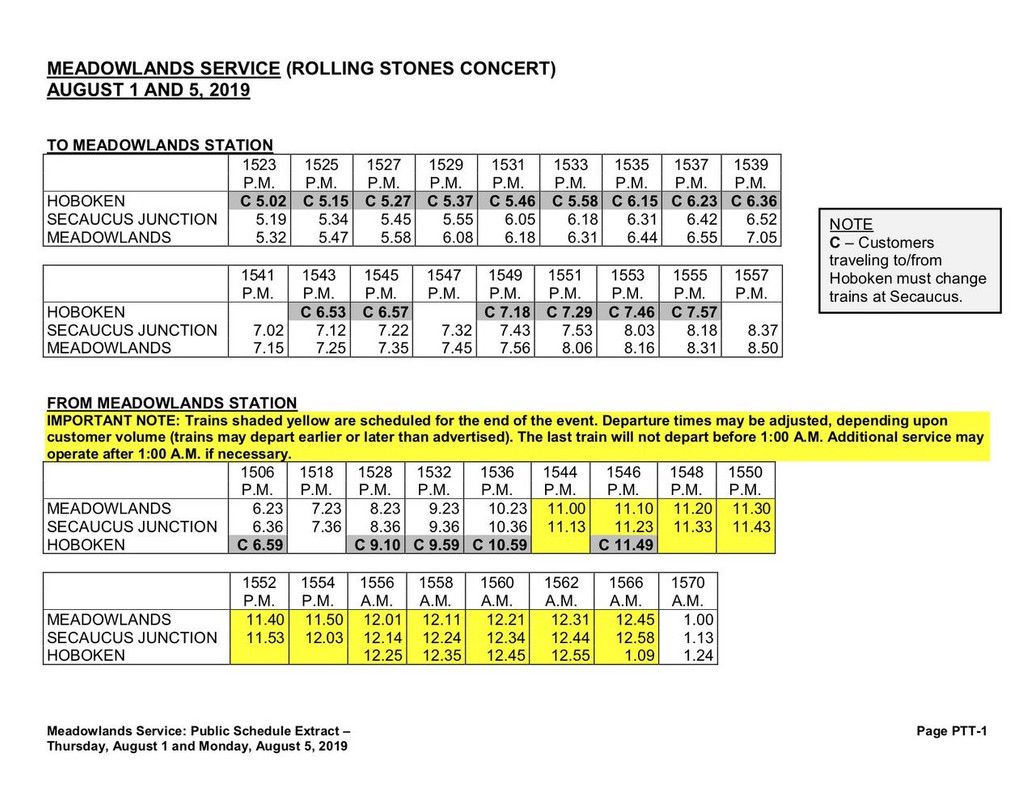 Note that all MetLife Stadium rail trips are served via shuttle train to/from Secaucus Junction/Hoboken and Meadowlands Rail Station. There is no direct Rail service to Meadowlands Station from any other rail line or station.

The rail line from MetLife Stadium has the operational capacity to move approximately 7,500 customers per hour. The closer you are to the front of the line following the concert, the shorter the wait time for a train to Secaucus. Depending on the number of customers traveling by rail, and where you are on the line to board, some customers may be subject to wait times of up to two hours or more to board trains from MetLife Stadium to Secaucus. In advance of the concerts, customers are strongly advised to check the departure times of final train connections from Secaucus. A list of final departures from Secaucus by rail line, including service to New York, is available below for your convenience.

Secaucus Junction to MetLife Stadium: Bus service will begin at 3:30 p.m. and will operate until rail service begins at approximately 5:30 p.m., operating between Secaucus Junction, Platform #10 and MetLife Stadium Lot C, which is adjacent to the NJ TRANSIT rail station. Buses will operate as a “load and go’’ system. Customers may experience wait times boarding buses at Secaucus prior to the start of rail service.

MetLife Stadium to Secaucus Junction: Trains will operate hourly beginning at 6:00 p.m. through 11:00 p.m. Then, following the event, trains will operate every 10 minutes until the crowds dissipate on a load-and-go basis, and then every 15 to 20 minutes as needed until 1:00 a.m. The last train is scheduled to depart from the Meadowlands at 1 a.m. Please check your connection times at Secaucus to allow ample time to connect to the last train of the evening to your final destination.

Customers are strongly urged to plan ahead and carefully check rail schedules for service from Secaucus to Penn Station New York and Hoboken Terminal after the event. Following the event, there will be limited direct service to Hoboken.

Customers traveling on NJ TRANSIT trains to the Meadowlands Sports Complex should purchase their round-trip tickets from their originating station TO MEADOWLANDS STATION to avoid delays boarding trains. Tickets purchased on the train will include a $5 surcharge for each ticket.

Customers connecting with trains at Secaucus should check the train schedules and allow for additional time in order to make those connections.

Coach USA operates No. 351 service from PABT to the Meadowlands.

I sent a couple emails to MetLife and CoachUSA at various email addresses on their websites about this.

"Coach USA generally makes tickets available about a week before each event but we will certainly share your note with them and our team.
We look forward to hosting you soon.
Thank you,
The Guest Services Team at MetLife Stadium"

"Stones to be up tonight.
We don't control their timing, but it will be up."

But so far ... Nothing on the website, as you noted

Sorry I am not familiar with NY/NJ public transport... So in order to get to MetLife Stadium, do I have to purchase tickets (in advance or at the station?) or does the NY Metro Card take me all the way to the stadium?

Quote
FeelinRealWell
Wild ride got me to this one! Originally bought a pair for the first June 13th date when they went on sale in November. The week before Christmas we find out after so many years of trying we are going to be blessed with a child!! So I'm super psyched that I will technically be taking my boy (found out the gender in late Feb) to a Stones show and I'm over the moon excited! Then boom,the bad news about Jagger's health comes and the the tour delay so I begrudgingly cancel the pair of tixx and get my 900$ plus back figuring it's the responsible move. Not only can we use the dough but more importantly the rescheduled date is a little too close to the baby's due date (Aug 26). Finally with my wife's blessing I buy one ticket this morning on TM for about 249$(pre rip-off fees) and now I'm so excited for Thursday night. I might be a little lonely , rolling solo but I will have my wife and my soon to be born baby in my heart to keep me company. Of course I will be peeking at my cell every song and a half just in case I have to hightail it outta there and get to the hospital! So I'm not too worried about the setlist or any potential Keef flubs...I just feel so happy and blessed to see my Stones live one more time!...and who knows maybe 6 or 7 years from now I will really end up taking my boy to a Stones show!!!

Don't buy from CL. Why would you when there are more reputable ticket resalers?
Options: Reply To This Message•Quote This Message
Re: East Rutherford NJ USA (near NYC) 2019 travel and show info
Posted by: TooTough ()
Date: July 29, 2019 14:01
NYC...here I come...

Anyway, does anybody know...

1. where the will call desk is located at the stadium?
2. if I can collect the Aug 5th ticket on Aug 1st, too?

Maybe the answer is here somewhere, but I´m just back
from a holiday and had no time to check yet.

Quote
spikenyc
I prefer the bus over the train especially when the show is over.
The line or que for the train is ridculous after the show.
Buses move more quickly.

spike,
where do I buy the tickets for bus 160 at the PA-Bus Terminal?

Don't buy from CL. Why would you when there are more reputable ticket resalers?

Dates are up now..
[web.coachusa.com]

Quote
Djuro
Anybody knows if buses 160, 161, 163 and 164 from Port Authority to Metlife area are vialable option to use, to and from the stadium?

I believe that NJ Transit local buses do not stop in the stadium complex on event days.
Suggest #351 CoachUSA listed above.
Options: Reply To This Message•Quote This Message
Re: East Rutherford NJ USA (near NYC) 2019 travel and show info
Posted by: RG ()
Date: July 29, 2019 18:30
Thank you. But how do I know on what time the bus leave (from NYC) to Stadium? Can't find it on their website.

Quote
schillid
COACH BUS LINE HAS FINALLY
ADDED THE DATES OF THE STONES SHOWS
TO THEIR WEBSITE FOR ADVANCE PURCHASE
OF BUS TICKETS:

Use this link instead... 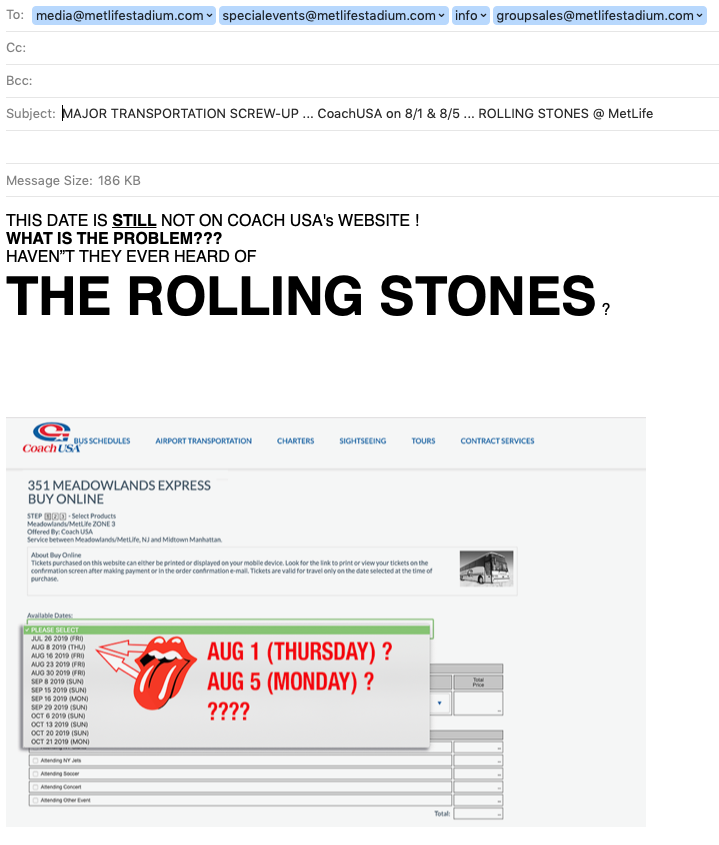 Y'all are welcome.
Now someone please get me a Lucky Dip for NJ1.

(Cuz there is no way I can spend hundreds of dollars to see these old guys again!
LOL.)