Strange show start. Lights on, Keith walks on stage, his back to the crowd. No sound on his guitar. But 40 years on the road makes some experience. With the main spotlight on him Keith handles the total silence and 12,000 fans waiting for his opening chords in a great way. Still having his back to the crowd, Keith open up the show once he has got the power back on his guitar. "Start Me Up"... "Start Me Up"... From then on I realized the crowd tonight made a lot more noise than last night. It was a great show, and if you ever plan to see one Stones show only on a tour, then make sure it is the 2nd show. They are always great! 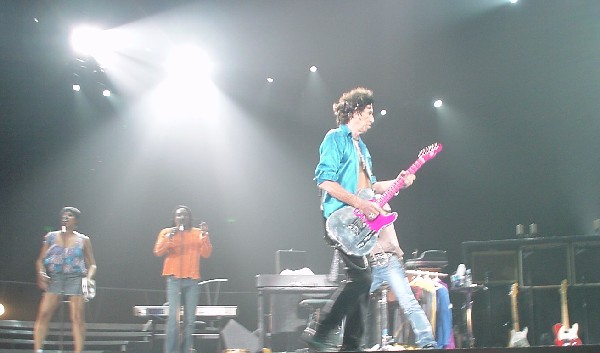 I've only seen the Stones at Wembley Stadium shows in the 90 & 95 so this was the closest I've seen them ... specially during the B stage songs. The closer you are the more you can appreciate Keith solo's, that Ronnie really is a cartoon character, that Charlie is completely unfazed by it all and that Mick's relentles energy is just incredible.

Great stuff although on a personal note I was disappointed to not have seen 'Can't You Hear Me Knockin' - much though I like 'Midnight Rambler'. I wish they would either drop 'Satisfaction' or at least crop it back to it's original 'pop' format of only a couple of minutes. It is a great 'pop' as opposed to 'rock' song that I for one don't really think lends itself to extended soloing ... 'Jumpin' Jack Flash' and a couple of others come into this category also.

That said 'Midnight Rambler' still comes over as a great contemporary blues tune and it was brilliant to see 'Mannish Boy' from so close. It really invoked memories of that video clip of Keith, Ronnie & Mick playing it with Muddy Waters in Chicago in about 1981.

Interesting to note that Stones concerts can still provoke violence - even though it was only a trio of slightly pissed women in the row in front of us and slightly to our left. One of them insisted on standing on her seat and was given a couple of warnings. Security then decided to eject all three of them (way over the top decision) and in the ensuing scuffle an elbow landed accidentally on the middle-aged- respectable-all-dressed-up- for-a-night-out-woman in front of me. She responded by adding to the misery of being ejected from a Stones concert by landing a couple of punches to the ejectee's head. Wow ... Altamont all over again :-)

Please send your reviews to [email protected]. Thanks!