Review by Martin in Los Angeles

Halloween traffic to downtown L.A. was terrible. Hour and a quarter from the valley.

Sheryl Crow was a poor opener for the Stones. Half the Staples Center was empty but filling slowly while she did 45 minutes of half-hearted songs. Musically they were fine, just not much energy. Nothing like George Thorogood or J. Geil's Band at the Los Angeles Coliseum in '82. In fact the warmup they had at the Odeon, Bournemouth in 1963 was better - or was it just that I was so much younger I didn't care!

The break was way too long, an hour. Since RS finished at 11.45, wasting an hour between the acts was irritating. By the time the Stones opened the place was packed though. They came out geared to go with Street Fighting Man and segued into IORR just as smoothly as they've always done. 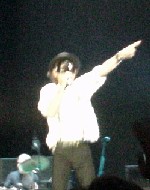 The Stones gave an energetic and musically crisp performance throughout, with high energy. We were up in the nose-bleed section to the right side of the stage-front, which, because of the great pitched-seating in Staples, afforded a decent view. The sound was ample, but not so loud you left with ringing ears, and great quality, given the generally poor acoustics of the arena.

Keith gave an unusually good rendition of Slipping Away half-way through, and the standard six were flawless (you know which ones they are - see the stats on this site). It would have been nice if two of the large outer screens had been hinged and motorized so that they could have rotated for the side audiences, but what the heck, we went for the music.

The three B-stage numbers were excellent and as intimate as you can be in a 20,000 arena. The only downer was the lack of encores. In Atlanta, the three B-stage numbers were more central to the set list at 14,15,16, with six great crowd-pleasers back on the main stage, closing with two encores. At Staples, after Jumping Jack Flash, the crowd were all on their feet for five minutes yelling "More!" to no avail.

Still all in all it was a great show and interesting to see the changes in 20 year intervals. Doubt they'll be doing this in 2022.

What a good show, despite the LA crowd arriving very late, they were more enthusiastic than usual for LA, many vixens, witches, and assorted goblins. As usual they played the best warm up tunes, this time playing the original versions of many songs they've covered, like hip shake, while costumed dwarves, and jugglers entertained. The boys started strong with Mick in his Bkack Crow-like Halloween mask for Street Fightin' Man with no video or sidemen, then after a very good version of IORR they played If You Can't Rock Me when halfway in Keith slipped up the change throwing off Darryl, then Woody & Chuck, making Mick slur through a line or two. Charlie nerver faltered (no suprise) and Mick quickly brought it back together and they ended it very tight. This slightly dampened the bands energy for sure, and may have belied a little tour fatigue, though few in the crowd noticed. 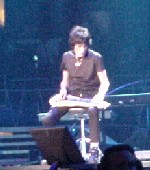 Don't Stop got the crowd singing along again, it's a strong song that works well. Then the lovely and dark Monkey Man just cooked, Ronnie played the Mick taylor slide part to perfection. Next Keith Sat down on a stool with an old Martin Acustic and started in Love in Vain, how sweet, how great! Ronnie, on lap steel, really played his heart out on the solo, afterwards Keith gave him a peck on the cheek and Woody let out a big smile. The video was also really good on this bit, showing a night scene overlooking a crowded freeway with a billboard of a video screen of the live show.

Then they showed the much used Exile cover art to signal the Exile set. All very good, Loving cup had Mick playing guitar, and all the horns and singers and the big finish. Rocks off was solid, Lisa, Bernard, Blondie, and Mick sounded great together. Mick said were going to try this one a little faster, Keith then bringing in Rip this Joint.

After a very solid Tumblin Dice, Keith did a nice job on Slippin Away, another cool Keith number, he's so amazing, you never quite know what's going on up there, he leaned on his guitar like a cane while he crooned. Keith quote - "Halloween, one night for you, every night for me." Keith then sang Before they make me run, right before this two very charged fans in front of me did a couple of lines, you won't see that at a McCartney pop show.

They get into Love Train, but it seems a little forced, nice message though for their Satanic Magesties. Can't you Hear Me Knockin' was so good to hear live, much better rendition then the version on the official site from the Orpheum, Mick did an impromptu Harp solo.

There was a nice rush of fans to the B-Stage, overwhelming security just long enough to pack the floor for Mannish Boy, which was very strong. Woody picked up a hat thrown from the crowd tossed it in the air and cought it on his head. After wearing it for a bit, Mick mischeviously snatched it off while Ronnie wasn't looking and threw it back to the crowd, they both laughed. You got me rockin seems kind of too easy. Brown Sugar was good on the B-Stage, with Bobby Keys appearing in the nick of time to hit the first note of his solo.

Back on the main stage, I was very suprised they only did one number, and most seemed suprised they didn't encore. In Thirteen Stones shows since 1975, this was my first without one. Still as always, A crazy show, and if your a live rock lover, there is no other place to be when the Stones are Rolling.

Sixth show since 1989. Good show, poor sound. Bought 2 tickets (nose-bleed) off ebay for face value - $60. Glut of tickets outside area available before show for well BELOW face. Personally saw a $165.00 ticket go for $60. I sold a $60 for $40. Moved down to a small area in front of section 215 that appeared to be closed off. About 25 of us just sat there behind stage, directly behind Lisa, Bernard and Blondie. About 15 feet away. Interesting to see what goes on between numbers w/ crew - preparing instruments, tuning, cleaning guitars, etc. Lisa, Bernard and Blondie were constantly turning around - waving, smiling, blowing kisses. Lisa was especially sexy - lifting her dress to her thighs and licking her lips, teasing us all. Jagger and Richards came over all night and played right in front of us. Downside was we couldn't see the horn section.

I saw the show at the Tower in Philly from the 7th row, so I wasn't expecting much. Cool that they played 9 different tunes. Great to hear Loving Cup, Monkey Man, Street Fighting Man and If You Can't Rock Me. Ronnie was GREAT on Love In Vain. Wish they would drop Love Train. How about Ain't Too Proud or Just My Imagination or Drift Away? No Sympathy or Dancing w/ Mr. D or Terrifying on Halloween? B stage was good - but why is You Got Me Rocking becoming a permanent addition to the set list? Good song guys but let's get something else in there - Star Fucker, All Down The Line, She Was Hot, One Hit???!?!??! reward your loyal fans and play the hits at the stadium.

Jagger and Richards seemed too be getting along all night. During band intros, after Keith was introduced, he grabbed Mick's arm and raised it up like a prize fighter. Keith had his arm around Mick at one point after a song. Great to see them in an arena so close. Crowd was great. Good show, guys. See you at the Wiltern.

This was the best Stones show I've seen yet!! Mick Jagger came out in a black hat, shirt with a skull on the back of it and Halloween mask and started it off with high energy, and rarely let up! So many highlights, I will just focus on a few. Best part of the night was the long, jammy Can't You Hear Me Knockin' with Keith riffing while Ronnie hit the solos almost like he owned them! They did a nice extended jam on this one, which I really loved. Mick even pulled out the harp for it which was a nice surprise! Monkey Man was pretty sweet, and Mick was prancing around like he was a monkey himself! But Love in Vain was just beautiful. Keith played an acoustic, seated and Ronnie played some sweet, sweet lap steel guitar and it was completed by some aching vocals by Mick. It was great to see all the red and blue lights from the toungue pins they were selling while they played that song.

The whole Exile set was just killer, I had never heard most of these songs live before and they used a great horn section too. Keith looked really happy and energetic and played a nice little set himself. He even put the guitar aside for part of Slipping Away and just sang it standing there. He talked for a bit but I couldn't understand him!!

Love Train was pretty cool since I had never heard that song before, and I think it's a pretty good choice for a cover. On the small stage, Mannish Boy was down and dirty blues, what the Stones do very well but not often enough. Ronnie and Keith got some nice solos in there also and some great extended soloing by Mick on the harp also. It was pretty interesting to see how often Mick changed outfits during the show too, must have been at least 5!

The band is in great form and I think everyone should check them out before this tour is over since they are pulling out some classics!

Thanks to Axel Schumacher for news links.