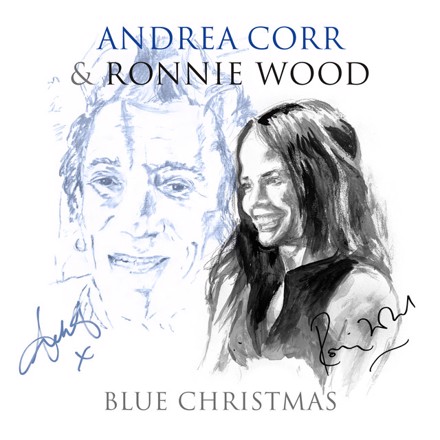 “The bluesy guitar on the Elvis original immediately brought Ronnie to mind,” the Irish singer-songwriter said in a news release. “I thought, maybe he’ll sing with me too. I gave him all the outs: I’ll understand, not to worry, we can still be friends and he just said, ‘yeah’ with so much enthusiasm. Now, it’s not just him and his guitar that I love: His singing is so good on this record


“As soon as Andrea asked and I listened to her voice on 'Blue Christmas,' I knew I wanted in,” Wood said. “I didn’t even have to think about it. We had great fun doing it.”

[www.sundayworld.com]
Options: Reply To This Message•Quote This Message
Re: Ronnie Wood and Andrea Corr: Blue Christmas
Posted by: GerardHennessy ()
Date: December 17, 2021 22:50
Love it. The fact that it is not polished, far from note perfect, and not especially serious, all adds to its charm. The song was always OTT, regardless of who sang it. Elvis manages to sound like he is imitating himself on his version.

Great bit of guitar on this as you would expect from the Ronmeister, and the drawings are wonderful as all his artwork is.

My favourite Christmas record this year...
Options: Reply To This Message•Quote This Message
Re: Ronnie Wood and Andrea Corr: Blue Christmas
Posted by: Hairball ()
Date: December 17, 2021 23:07
Definitely not on my Christmas wish list, but glad Ronnie is staying active.
Would be nice to hear some legit new solo material from him - especially considering the Stones as a band can't seem to get it done

The programme will be capped-off with a very special musical moment, as Andrea Corr and Rolling Stones rock and roll legend Ronnie Wood will perform the Elvis classic ‘Blue Christmas’ in-studio.

[youtu.be]
Options: Reply To This Message•Quote This Message
Re: Ronnie Wood and Andrea Corr: Blue Christmas
Posted by: ProfessorWolf ()
Date: December 18, 2021 10:57
that was wonderful

The complete episode, incl. an interesting interview with RW (and Andrea Corr) can be watched here:

The complete episode, incl. an interesting interview with RW (and Andrea Corr) can be watched here:

Great interview and performance.. thanks!!

Ronnie looks fantastic! Love it.
Options: Reply To This Message•Quote This Message
Re: Ronnie Wood and Andrea Corr: Blue Christmas
Posted by: crawdaddy ()
Date: December 18, 2021 21:08
Ronnie is looking great, and of course Andrea is always looking great as well as her lovely voice.
You can't hold Ronnie back from performing.