love it, even with all the mistakes
Options: Reply To This Message•Quote This Message
Re: Warsaw Poland 08-July-2018 Rolling Stones No Filter live updates
Posted by: Christiaan ()
Date: July 10, 2018 11:32
Opening with Streetfighting Man

He was also in Prague.
Options: Reply To This Message•Quote This Message
Re: Warsaw Poland 08-July-2018 Rolling Stones No Filter live updates
Posted by: 1962 ()
Date: July 10, 2018 11:41
Melanie Hamrick and Deveraux Octavian Basil Jagger (Mick's 1,5 year old son with earplugs and his mum) were there, too!
You can see them here:

Quote
franzk
Sorry for poor quality, but is it Mick's son in Warsaw?

Yes..both... Deveraux with the green headphones is also on this picture

Options: Reply To This Message•Quote This Message
Re: Warsaw Poland 08-July-2018 Rolling Stones No Filter live updates
Posted by: Fillmore ()
Date: July 10, 2018 14:00
What a wonderful end to this part of the tour! Besides all the awesome moments on stage (for example when the roadie runs after MJ to finally pass him the working microphone), I liked a scene that I could watch from Pit B: when KR after BTMMR disappears behind the drum riser and gets a long kiss from his wife there. Short conversation, cigarette lit, another kiss and back on stage. Patti vanishing backstage. Priceless.
YCAGWYW keeps making me cry, literally, LARS is also great on this tour. TD und Start Me Up are “weaving at its best”, Country Ronnie and the B-Bender Tele, great! During MR it´s Hard Rock Ronnie. And Richards on the Single Cut sounds just as great as on the double cut he had used earlier. Jagger is unbelievable these days. He has the whole stadium eating from his hand.
Tiny points of criticism: the indoor-pyros look more like candles on a birthday cake - and I still don´t understand what Mr. Clifford thinks what he does on stage most of the time. That combination of grinning and “dancing” and adjusting his teenybopper-hairdo is not worthy of the world´s finest R n´R band.
I crashed into a lot of very nice people again. Ryan from Australia was “le conferencier” at the Nancy Lee on Saturday. Connecting anybody with everybody. As well as the young lady from New York with her suitcase full of RS goodies, pins, stuff. Supercool! The three gentlemen from NRW / Germany celebrating Bobby Keys and the two couples from the States who went dining at the Raffles afterwards. Great guys and ladies.
Now it´s time to bring body, soul and bank account to rest in order to follow the news we are all waiting for.
Warsaw, my first visit to Poland was a big pleasure, thank you for all.
Cheers, Fillmore

saw him at other shows too, not sure where, london, berlin and/or stuttgard.

Quote
zgredzik
I'm very happy that most of foreigners liked my beautiful country. Hope you will visit Poland again sometime!

I've loved your beautiful country ever since I 2st visited it in 1995 and that's why I have a Polish user name even though I'm a Scot.
Options: Reply To This Message•Quote This Message
Re: Warsaw Poland 08-July-2018 Rolling Stones No Filter live updates
Posted by: SomeTorontoGirl ()
Date: July 10, 2018 16:38

He was in Marseille, right across the rail from me
Options: Reply To This Message•Quote This Message
Re: Warsaw Poland 08-July-2018 Rolling Stones No Filter live updates
Posted by: 35love ()
Date: July 10, 2018 17:18
More good news:
In the last photo of the reports,
[iorr.org]
Mick’s holding onto the mic!
No drop mic >

- The most stupid entrance for standing tickets. Running to the other side of the stadium, running in and running... I'm sure it would have been possible to manage this entrance at another gate much easier for everybody.

- The audience seemed to be very hungry for the Stones. Saw a lot of twenty-somethings coming to the show and there were hot to see this band (quite a lot pushing at the entrence). A 15 year old boy attended his first Stones show with his family in the first row of diamond pit (I'm quite sure his father is an iorr member...).

- The audience made a lot of noise just before showtime doing "la ola" all around the stands.

- The first show for me knowing the setlist before showtime. A guy in the pit came along with it and a few fans asked for a picture.

- Did anyone notice that sometimes Mick mixed up a few lines of the lyrics? I'm not sure about that.

- A great lightshow by the audience using there smartphones.

- Extended version of "You can't always get..."

- Extended instrumemental of "Sympathy..." - It's hard for Mick so sing without a working mic...

- Marlon was in the pit watching his father for a few songs. I saw some poeple coming with him but I don't know who is who.

- Can anyone post what Mick said in Polish (including introducing the band)? Dziekuje!

- A safe setlist, yes. I didn't expect anything special.

I'm sure this was the last European tour. Someone told me Keith said in Twickenham: "I will miss you all..."
Options: Reply To This Message•Quote This Message
Re: Warsaw Poland 08-July-2018 Rolling Stones No Filter live updates
Posted by: Wickylah ()
Date: July 10, 2018 17:52

Some crazy people in front of me. haha
Options: Reply To This Message•Quote This Message
Re: Warsaw Poland 08-July-2018 Rolling Stones No Filter live updates
Posted by: benstones ()
Date: July 10, 2018 18:09
One of my pictures: 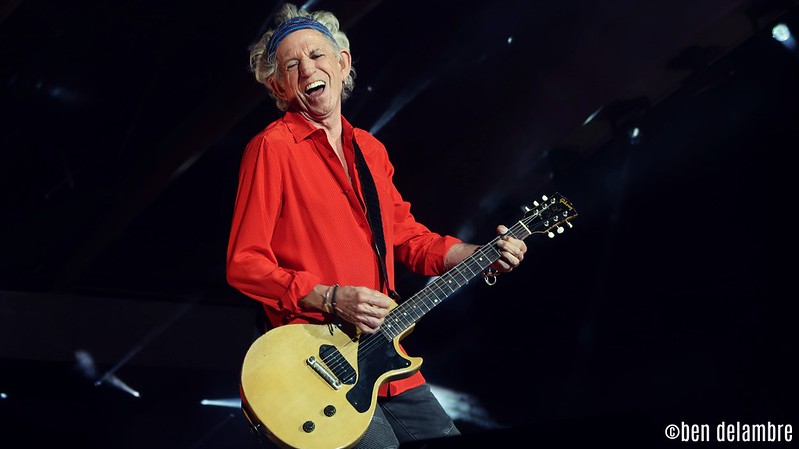 Quote
Lorenz
Fantastic gig.
Thanks to Tom from Poland who read my post and gave me a diamond pit ticket!

Some random thoughts: mick was handed a malfunctioning mike during sympathy so he had to go back and try to get a working one. That’s why the intro was longer than usual. Charlie went out after the bows to throw two more sticks to someone in the filter pit. Keith’s playing got somehow more fluid again and it works surprisingly well to turn his guitar up for the signature riffs. The stones crowds get ever more mixed and it’s more and more a social event, some kind of a trophy? The whole band is pretty well oiled and probably playing better than e.g. in 2007.

R u Volker Lorenz? If so, was Frank Cunningham there? And what is a diamond pit ticket?

Quote
1962
Bob Dylan: “The Rolling Stones are truly the greatest rock and roll band in the world and always will be. The last too. Everything that came after them, metal, rap, punk, new wave, pop-rock, you name it…you can trace it all back to The Rolling Stones. They were the first and the last and no one’s ever done it better.”