Lonnie Mack was playing at the Lone Star Cafe in New York City and Keith and Woody joined him on stage for a song or two.
July 11, 1985

nice 85 shot, Toru-A - thanks! here's a bit about that show, from [www.timeisonourside.com] -
i think their date for this is the right one - july 13th 85 was the Live Aid show.

When Richards and Mack started trading blues licks... there was no doubt about who all eyes were focused on. Whenever guitarists get up in public to jam together, there's an element of the cutting contest. At the Lone Star Mack was, for all his smiles, laying into Keith Richards with every lick he had. In front of his own band, he tore off runs that - on a technical level - Keith couldn't hope to match. The remarkable quality about Keith Richards, though, was that he obviously didn't care. The faster Mack soloed the more Keith smiled and nodded - and when it was Keith's turn to burn he just choked that guitar in the signature primitive Berry/Exile/Richards style. By virtue of being so at ease with himself and his instrument, he sounded just great. Lonnie Mack, for all his moves, didn't win that cutting session. Keith Richards took it by virtue of being not a man playing a guitar, but a man who was part of a guitar. It was way past right or wrong. It was just KEITH. The way Keith played was the way Keith walked and thought and breathed.

- Bill Flanagan, Rolling Stone Magazine, reporting on a night, July 9, 1985,
when Keith got up onstage to jam with Lonnie Mack at the Lone Star Café in New York City

i've had this shot labelled "nyc 1983", but i bet it's also from that Lonestar Cafe jam: 
Wham.
Lonnie Mack was a legendary figure in the cincinnati music scene when I was still a teenager. he lived in indiana not far from cincinnati and as far back as the late 50's people talked about his edgy style. one of the first true roadhouse blues-rock guitarists, he influenced generations of players like johnny winter, keith richards, and a young kid named stevie ray. his searing exaggerated tremelo could slice off the top of your head if you didn't duck in time. lonnie played (and still plays) a Gibson Flying V, the same one he's played since 1958. it has the serial number 7!
one night after working on graceland all day, paul simon and I decided to see lonnie playing at the Lone Star Cafe. it was his "comeback" tour of 1985 and new york city was buzzing about lonnie mack.
the show was exciting. the small tight balcony above the bar where paul and I sat was crowded with luminaries. at the table next to ours sat mick jagger and keith richards. looking around you could make out the faces of actors: matt dillon, sarah bernhardt, and other people who at least looked famous.
backstage after the show lonnie was surrounded, incongruously talking with mick and keith about his real love: fishing. lonnie is a big man with a deep drawl like toby keith. I really like him. he smiled when he saw me and said, " hey adrin, still playin' with that king chris-min?" "yes, lonnie". 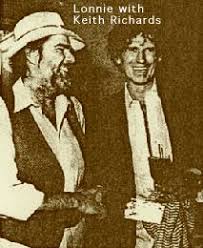 I left him to bask with the "big fish" in the pond. it was lonnie's moment.
but earlier during the show I had my own moment. at one point paul left our table for a while. when he returned he asked me to say hi to someone. we worked our way across the balcony, past the bar to a doorway in the back corner. "I want to introduce you to someone," paul said. he opened the door and standing alone in the stairwell was bob dylan. "this is adrian belew, bob," paul said. "yeah, I heard about you, " bob said slowly in that bob dylan voice I had imitated nearly 20 years earlier. and that was all he said.
leaving me to wonder ever since: what had he heard?

Quote
kitoise
any link to DL this CD with Keef & Ronnie please?

Options: Reply To This Message•Quote This Message
Re: Keith & Ron with Lonnie Mack 1985
Posted by: carlitosbaez ()
Date: April 22, 2016 14:49
One of the greastest no doubt about it Lonnie Mack