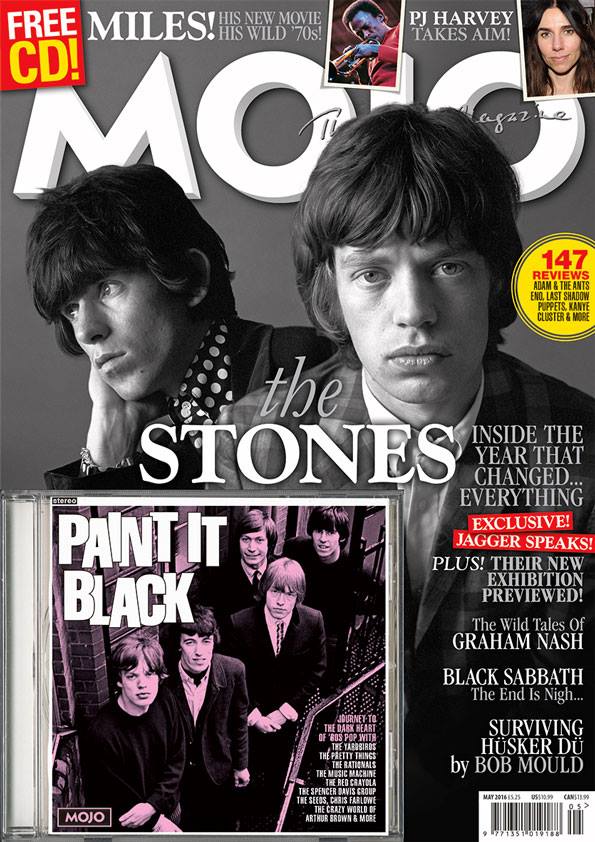 AFTER 1966… AND all that, The Rolling Stones were never the same again.

In the new issue of MOJO (May 2016 / #270), on sale in the UK from March 22, we take a close look at the seismic changes, new ideas and fresh sounds that in 12 months transformed the band from R&B wannabes into rock’n’roll outlaws.

Tracing the events of 50 years ago this month, our cover feature examines the impact of Aftermath as an album, a cultural watershed and a cog in the demise of one of its key architects, Brian Jones.

“It was a good album,” Mick Jagger says, looking back in a new interview. “The important thing about it was that it was all songs we’d written ourselves, rather than a bunch of cover versions and some chucked-together blues tunes that we claimed to have written. It was our coming of age.”

Also in the new issue, the frontman discusses how The Stones’ aesthetic began to mutate from sharp suits to Establishment-challenging fashion as he gives MOJO a sneak preview of his band’s forthcoming Exhibitionism show, which opens at London’s Saatchi Gallery next month.

“’65 was still the slim-jim ties and tight three-button suit jackets. That stuff is still fashionable now if you put it together right,” notes Jagger of the band’s early look.

“’66 was definitely a change,” Jagger continues. “After that you start getting into the ‘anything goes’ era. Now the trouble with ‘anything goes’ is you have to know what you’re doin’, ’cos you’re obviously gonna make some mistakes (laughs).”

Quote
RaahenTiikeri
Does Jagger remember?
I thought he does't

Aftermath (UK and USA version) when I was 15-16 years old, discovering the back catalouge... One of my favourites!!!

Quote
RaahenTiikeri
Does Jagger remember?
I thought he does't

Do we believe Keef's memory?

Quote
Rockman
maybe Dickeee Green got it arse about .....

Not long before this book went to press, a letter of mine came to light, which had been in the possession of my aunt Patty for almost
fifty years and had never been seen outside my family. She was still alive when she gave it to me, in 2009. In it I describe, among other
things, the moment I met Mick Jagger on the train station at Dartford in 1961. The letter was written in April 1962, only four months later,
when we were already hanging out and trying to learn how to do it.

6 Spielman Rd
Dartford
Kent
Dear Pat,
So sorry not to have written before (I plead insane) in bluebottle voice. Exit right amid deafening applause.
I do hope you’re very well.
We have survived yet another glorious English Winter. I wonder which day Summer falls on this year?
Oh but my dear I have been soooo busy since Christmas beside working at school. You know I was keen on Chuck Berry and
I thought I was the only fan for miles but one mornin’ on Dartford Stn. (that’s so I don’t have to write a long word like station) I was
holding one of Chuck’s records when a guy I knew at primary school 7-11 yrs y’know came up to me. He’s got every record
Chuck Berry ever made and all his mates have too, they are all rhythm and blues fans, real R&B I mean (not this Dinah Shore,
Brook Benton crap) Jimmy Reed, Muddy Waters, Chuck, Howlin’ Wolf, John Lee Hooker all the Chicago bluesmen real lowdown
stuff, marvelous. Bo Diddley he’s another great.
Anyways the guy on the station, he is called Mick Jagger and all the chicks and the boys meet every Saturday morning in the
‘Carousel’ some juke-joint well one morning in Jan I was walking past and decided to look him up. Everybody’s all over me I get
invited to about 10 parties. Beside that Mick is the greatest R&B singer this side of the Atlantic and I don’t mean maybe. I play
guitar (electric) Chuck style we got us a bass player and drummer and rhythm-guitar and we practice 2 or 3 nights a week.
SWINGIN.’
Of course they’re all rolling in money and in massive detached houses, crazy, one’s even got a butler. I went round there with
Mick (in the car of course Mick’s not mine of course) OH BOY ENGLISH IS IMPOSSIBLE.
“Can I get you anything, sir?”
“Vodka and lime, please”
“Certainly, sir”
I really felt like a lord, nearly asked for my coronet when I left.
Everything here is just fine.
I just can’t lay off Chuck Berry though, I recently got an LP of his straight from Chess Records Chicago cost me less than an
English record.
Of course we’ve still got the old Lags here y’know Cliff Richard, Adam Faith and 2 new shockers Shane Fenton and John
Leyton SUCH CRAP YOU HAVE NEVER HEARD. Except for that greaseball Sinatra ha ha ha ha ha ha ha.
Still I don’t get bored anymore. This Saturday I am going to an all night party.
“I looked at my watch
It was four-o-five
Man I didn’t know
If I was dead or alive”
Quote Chuck Berry
Reeling and a Rocking
12 galls of Beer Barrel of Cyder, 3 bottle Whiskey Wine. Her ma and pa gone away for the weekend I’ll twist myself till I drop
(I’m glad to say).
The Saturday after Mick and I are taking 2 girls over to our favourite Rhythm & Blues club over in Ealing, Middlesex.
They got a guy on electric harmonica Cyril Davies fabulous always half drunk unshaven plays like a mad man, marvelous.
Well then I can’t think of anything else to bore you with, so I’ll sign off goodnight viewers
BIG GRIN
Luff
Keith xxxxx