All dates are now up on Bob’s website
[www.bobdylan.com]

ROCKMAN
Options: Reply To This Message•Quote This Message
Re: OT: Bob Dylan news and more
Posted by: charlesbaudelaire ()
Date: May 15, 2018 05:37
London? How about California? The last he played here, it was in a blasted casino where one had to be 21 years of old just to get in. That sucked for those with families.

Archival albums by Bob Dylan, the Band, rumored to be released this year

Dylan’s 'Village Gaslight' and 'Blood on the Tracks,' the Band’s 'Music From Big Pink,' expected to be upgraded, expanded.

Archival recordings by both Bob Dylan and The Band are rumored to be released in the near future. Dylan’s October 1962 recordings at the Gaslight in Greenwich Village, the long-delayed box set of his 1974 “Blood on the Tracks” sessions in New York and Minneapolis, and a 50th-anniversary version of the Band’s “Music From Big Pink,” are all reportedly being prepped for release later this year.

Richard Alderson, Dylan’s former sound engineer, commented about the two Dylan releases in a recent Facebook post. According to Alderson, “My original recordings of Bob from the Gaslight in October 1962 will be released on Sony in the near future… very, very few have heard them in their pristine sonic glory.

Soon (to) come with the correct provenance and my story about recording them.” Separately, Alderson confirmed, “‘Blood On The Tracks’ (is) being reissued soon with all the NYC recordings, as a box set.”

The Gaslight recordings have been heavily bootlegged, and a 10-song version was officially released by Sony in 2005, initially through an exclusive 18-month deal with Starbucks. The “Blood on the Tracks” box set was originally scheduled to be volume 10 of Dylan’s “Bootleg Series” in 2013, and an alternative, uncirculated take of “Meet Me in the Morning” was added as the b-side of a 7” version of “Duquesne Whistle,” as a promotional tool. Surprisingly, “Another Self Portrait” was released instead. The most recent “Bootleg Series,” “Volume 13 - Trouble No More 1979-1981,” was released last November.

The original acetate of “Blood on the Tracks” featured 10 songs recorded in September 1974 at A&R Studios in New York City. That version was scrapped, and Dylan re-recorded half of the album at Sound 80 Studio in Minneapolis at the end of the year, using local musicians. Alternate takes have already been officially released on "Biograph," "Bootleg Series (Rare & Unreleased 1961-1991)," and the soundtrack to "Jerry Maguire."

'Music From Big Pink'
The Band’s guitarist and main songwriter, Robbie Robertson, has hinted on social media that a 50th-anniversary version of their 1968 masterpiece, “Music From Big Pink,” will be released later this year, probably in late summer. On March 1, Robertson tweeted, “Been listening to multi tracks of big pink [sic].” When asked if a re-release was in the works, and if he was still in contact with keyboardist Garth Hudson, Robertson replied “Yes” to both questions. He also confirmed the original recordings were done on four-track tapes. Today, on Twitter, Robertson acknowledged, "this july music from big pink turns 50 [sic]."

Additionally, last July, Robertson posted the following on Twitter, “New album progressing nicely.” On March 10, he shared the following on his Facebook page, “Lovely day in the studio with Glen Hansard,” along with a picture of the two of them together.

[us.blastingnews.com]
Options: Reply To This Message•Quote This Message
Re: OT: Bob Dylan news and more
Posted by: Cristiano Radtke ()
Date: May 24, 2018 03:20
The title of this video does full justice to what's being played, and more. Happy 77th birthday, Mr. Dylan. And thank you for the music.

A BOB DYLAN BIRTHDAY SPECIAL. THIS IS A REAL TREAT. MAGNIFICENCE PERSONIFIED

Options: Reply To This Message•Quote This Message
Re: OT: Bob Dylan news and more
Posted by: Hairball ()
Date: May 24, 2018 04:04
Happy Birthday dear Dylan, and many more.

Rockman Going to see him for the first time on August 28th,Christchurch his tickets must of sold pretty quick all the lady could say at Ticketek while I was getting my ticket sorted..they're going fast,they're going fast.Really looking forward to this one..

ROCKMAN
Options: Reply To This Message•Quote This Message
Re: OT: Bob Dylan news and more
Posted by: hopkins ()
Date: May 24, 2018 23:38
. can not win today; i have these brilliant ideas!! that someone else had a few days ago. uuhhh deleted the link....

Happy Birthday Bob. You're amazing, appreciated and very much loved round my house. 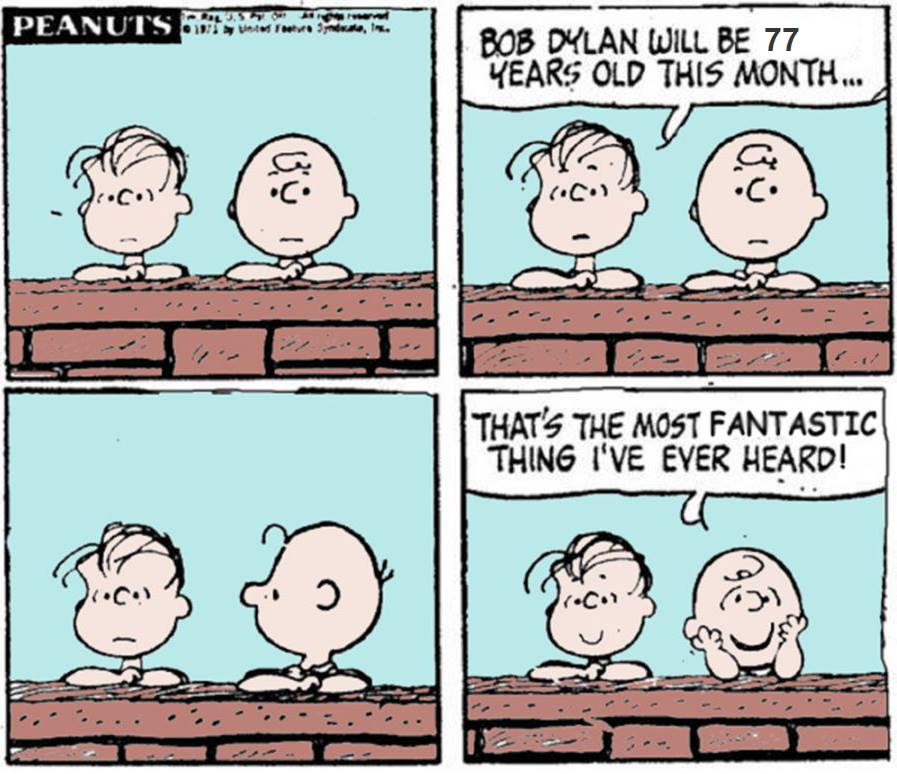 Options: Reply To This Message•Quote This Message
Re: OT: Bob Dylan news and more
Posted by: Rockman ()
Date: May 25, 2018 01:33
Happy Birthday Bob. You're amazing, appreciated and very much loved round my house.

Who how cool you have Dylan statues in your garden ????

ROCKMAN
Options: Reply To This Message•Quote This Message
Re: OT: Bob Dylan news and more
Posted by: Hairball ()
Date: June 4, 2018 10:38
"If I want to listen to Sinatra I'll listen to Sinatra...It's been a very long time since I've related to some of the thing's he's doing. But it doesn't matter, because I can go back,
when I'm in a certain mood and listen to Chimes of Freedom or John Wesley Harding. This guy gave us The Death of Emmett Till" - P.Smith

Nicely said, and that sort of parallels the way I feel about the Stones these days.

Cool pic with Johnny Hallyday. Dylan got around for sure.

Options: Reply To This Message•Quote This Message
Re: OT: Bob Dylan news and more
Posted by: loog droog ()
Date: June 13, 2018 19:05
Never saw this footage of Dylan and Johnny Cash before.

[www.youtube.com]
Options: Reply To This Message•Quote This Message
Re: OT: Bob Dylan news and more
Posted by: Cristiano Radtke ()
Date: June 19, 2018 04:45
Bob Dylan's America - an Arte TV documentary series. 2 out of 5 episodes can be watched on the link below.

"From New York to New Orleans, from Minnesota to San Fransisco, German musician Wolfgang Niedecken follows in the footsteps of the great American songwriter." 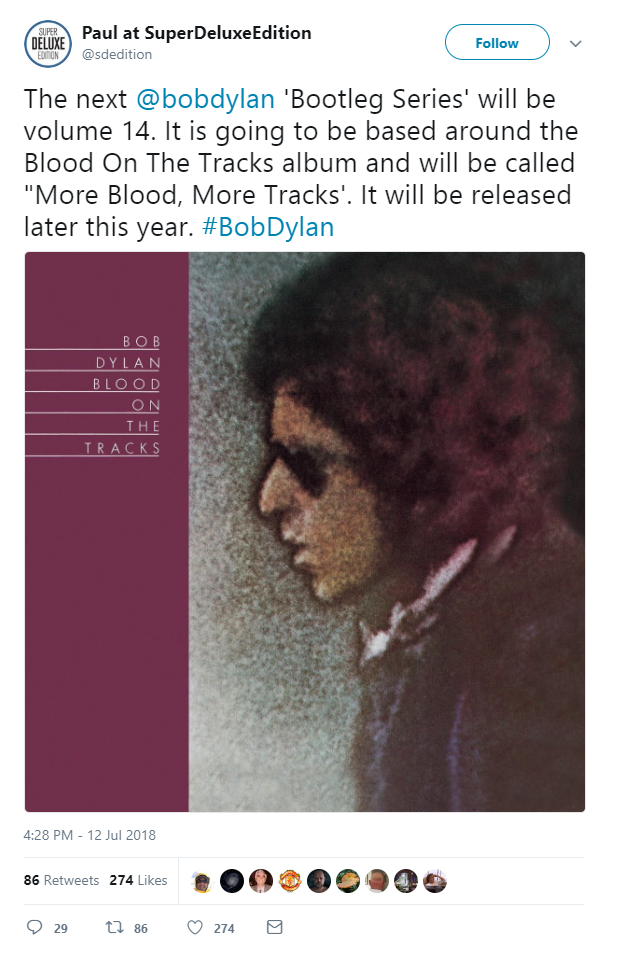 Dare I say this is more exciting than the Beggars deluxe?
To have this along with the Beatles White album deluxe will be amazing, and hoping Beggars will live up to it's potential to make it a holy trinity.

Couldn't agree more. One of my favourite all time albums. Timeless,
Bob was of course going through a separation from Sara (and eventual divorce).
Pity for us fans that Mick's own private life doesn't seem to have led him to raise his game lyric wise. Different songwriting styles I guess.
Options: Reply To This Message•Quote This Message
Goto Page: PreviousFirst...4849505152535455565758...LastNext
Current Page: 53 of 84