Could it be that the super-grotesque Frankenstein-creature recently touring is already a thing of the past?

Anyway - seems like they moved from one singer with no voice anymore ...to another singer who never has had a voice ...to their former singer who´s voice is known to be gone... And they will probably release an album sounding like a twin of its 45 brothers...

This is gonna be thrilling.

His honesty is as admirable as his sense of humor 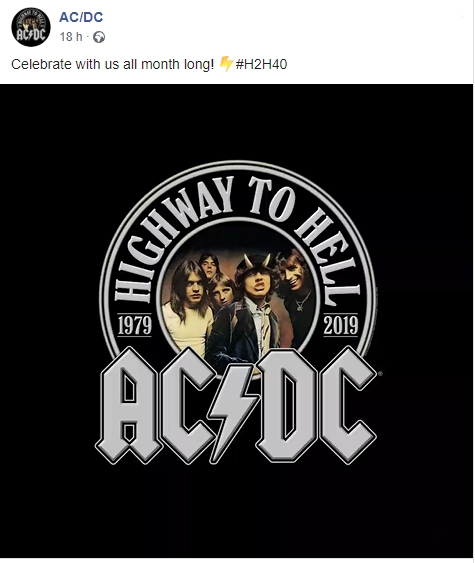 Which Wednesday? Tour-announcement in the middle of the Summer when "everyone" is in vacation? Sounds unlikely ....
Options: Reply To This Message•Quote This Message
Re: OT: AC/DC latest news and more - now with Axl Rose
Posted by: powerage78 ()
Date: July 17, 2019 12:22
Today.

Quote
DGA35
I didn't realize that version of H2H wasn't already on youtube. It was released on the Family Jewels DVD several years ago.

They've been gradually uploading a lot of live content from their official video releases for the last few years (Live At Donington, No Bull, Live At River Plate).

They were excellent back then.

Lol, I literally posted this 2 days ago.

Quote
powerage78
This one is fantastic too :

Hold on, I'm still digesting the first one. This is excellent!
Options: Reply To This Message•Quote This Message
Re: OT: AC/DC latest news and more - now with Axl Rose
Posted by: powerage78 ()
Date: July 24, 2019 09:51
Unseen, BUT to be seen

Quote
powerage78
Unseen, BUT to be seen

Quote
keefriff99
The Jack from Countdown, 1979

Quiet arn't ya? We'll fix that!

You guys are ready.