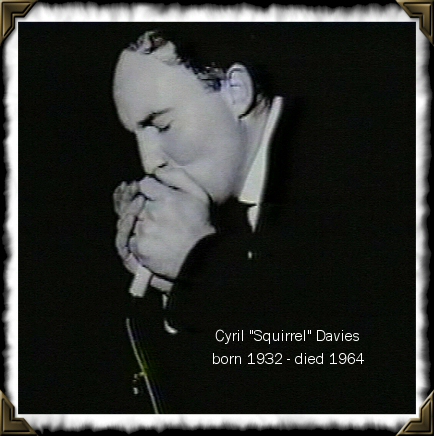 Today marks the fiftieth anniversary of the passing of Cyril Davies, an unsung hero and true pioneer, along with Alexis Korner, of early British R'n'B.
Although he played banjo and guitar, he is best known as an excellent blues harmonica player heavily influenced by Little Walter.
Having played skiffle as part of Ken Colyer's jazz band, Davies and Korner eventually formed their own "Roundhouse Jug Four" and "Breakdown Group", still playing skiffle, before forming "Blues Incorporated", Britain's first "proper" R'n'B group, in 1962
opening at the Ealing Club in March. Later that year, in May, they also secured a Thursday night slot at the The Marquee Club in Wardour Street.
The lineup of Blues Inc. was fairly fluid but for a time a young Charlie Watts held the drum stool.
Alexis Korner was very encouraging to the many young blues fans and aspiring performers that turned up at Blues Inc.'s gigs and often invited them to perform with the band including many that would go on to have careers of their own including Brian Jones, Paul Jones, Mick Jagger, Eric Burdon, Keith Richards, Eric Clapton & Rod Stewart.
Cyril Davies, on the other hand, was notoriously "grumpy" but he did give Mick Jagger some advice when he was asked for some tips on harmonica playing.
"You f*cking blow it, you f*cking suck it, that's all there is to it"! 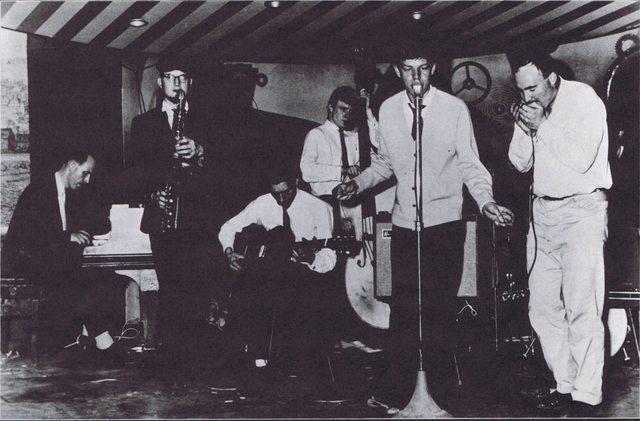 The above lineup shows the band that was invited to perform on the BBC radio's "Jazz Club" programme on July 12 1962.
From left to right: Dave Stevens, Dick Heckstall-Smith, Alexis Korner, Jack Bruce, Mick Jagger, Cyril Davies and Charlie Watts (just seen behind Cyril)
You can see Charlie better in this picture: 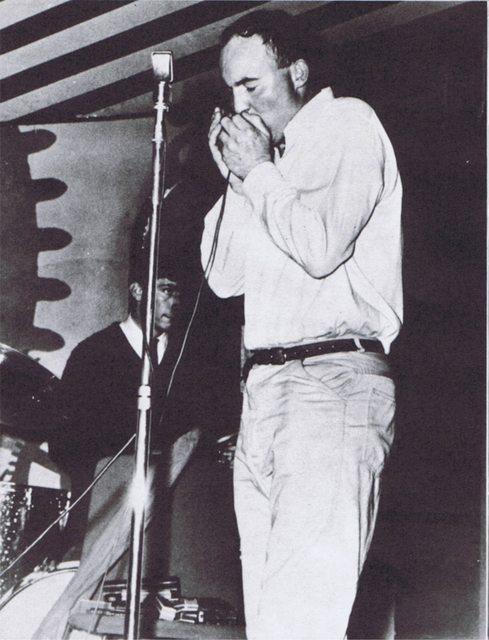 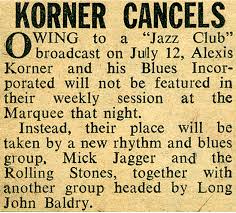 Unfortunately, the BBC wouldn't pay for a seven piece band so Mick Jagger wasn't included. But as the recording for the broadcast clashed with Blues Incs' Thursday night slot at the Marquee, Mick said that he'd get the band that he'd been rehearsing with to fill the slot and the rest is history.

This is Blues Incorporated's recording from July 12 1962:

Blues Incorporated released the album "R&B from the Marquee" in November 1962 although it was actually a studio recording. 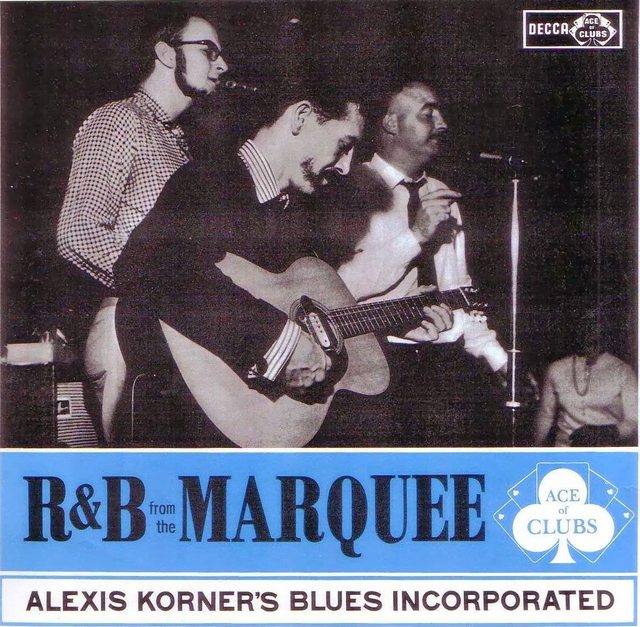 The All Stars even appeared on TV:

Cyril Davies died on January 7 1964 of endocarditis just short of his 32nd birthday.
Gone but not forgotten,a plaque was placed on the site of the old Ealing Club on Saturday 17th March 2012. 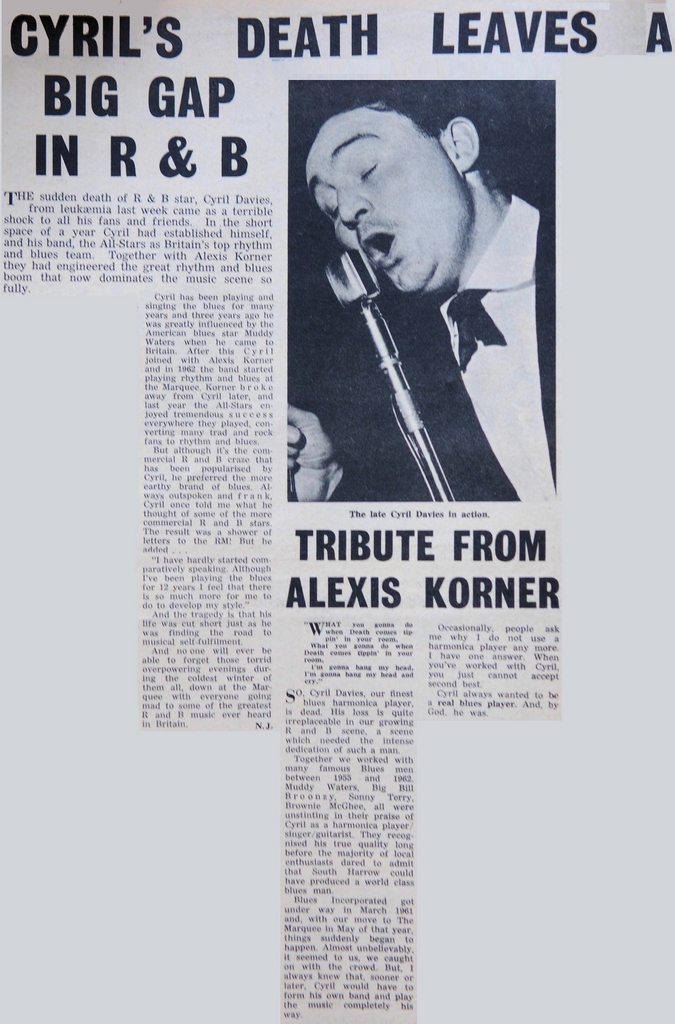 For more information visit this excellent website co-run by ChicagoCalling, an occasional contributor to these pages:
[www.cyrildavies.com]

"As we say in England, it can get a bit trainspottery"

Charlie answered the Guardian's questions last April:
G - Given your jazz background, was it a bit of a comedown when you joined the Stones?

CW - It was more of a shock joining Alexis Korner. I'd never played with a harmonica player before – I couldn't believe Cyril Davies when he started playing! We only played out of London once, in Birmingham. Cyril got £1 because he was a professional musician; so did [sax player] Dick Heckstall-Smith and [bassist] Jack Bruce. I wasn't so I got half a crown. Fantastic, isn't it? Half a crown! The Stones were just another gig, but then we started touring around England … I was waiting to start another job, but I never went back to it. I was a bit out of sync with all of them, Brian, Mick and Keith [Richards], but Keith taught me to listen to Buddy Holly and things like that. Mick taught me a lot about playing with songs, really, the melodies and that.

Apparently Brian used to see Cyril (somewhere) early on for some harp tips. Bill W. - "Brian began to imitate (Jimmy) Reed's lazy style and practice Davies' technique of bending and flattening the notes. This was the first step in Brian's departure from the guitar, searching for stimulation from more exotic sounds".

Alexis Korner said of the early recordings Mick had sent him, "I thought 'Whoo!' Cyril heard Mick and he liked him and the sound on the tape".

Keith - "Cyril Davies was also very anti at that time, although he changed his mind within a few months. Cyril would say, 'This is not a rock'n'roll club," and so I'd have to take on this tough panel beater'."

Quote
runaway
Thanks Great post- I think its Jack Bruce on bass in the above picture line-up.

You're quite right. I thought I'd included his name. Fixed now

Quote
runaway
Thanks Great post- I think its Jack Bruce on bass in the above picture line-up.

You're quite right. I thought I'd included his name. Fixed now

Great piece of music history of the early years in The Sixties.
Options: Reply To This Message•Quote This Message
Re: OT (ish) Remembering Cyril Davies (23 January 1932 – 7 January 1964)
Posted by: Rolling Hansie ()
Date: January 8, 2014 19:12
Great post Deltics. Thank you very much

In other words, all the usual Eel Pie Club suspects - this is usually a great evening.

Quote
The Joker
"Unfortunately, the BBC wouldn't pay for a seven piece band so Mick Jagger wasn't included. But as the recording for the broadcast clashed with Blues Incs' Thursday night slot at the Marquee, Mick said that he'd get the band that he'd been rehearsing with to fill the slot and the rest is history"

No, Blues Inc. were recording at the BBC and so the Stones were able to make their debut at the Marquee in place of Blues Inc.

"As we say in England, it can get a bit trainspottery"
Options: Reply To This Message•Quote This Message
Re: OT (ish) Remembering Cyril Davies (23 January 1932 – 7 January 1964)
Posted by: crawdaddy ()
Date: January 8, 2014 21:50
Really nice and informative post with great pics Deltics. Thanks so much for this great post.
Also to Green Lady for the info for the Cyril Davies tribute in March.
Quite a few familiar names appearing still playing in the area.
Gonna try and get there that night. 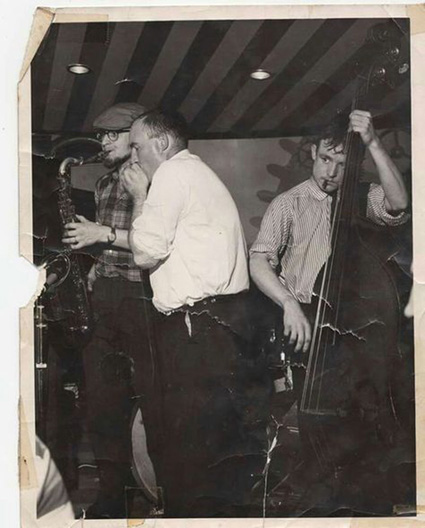