Quote
fortilix
Mick Jagger - THROUGH THE YEARS my silver
FLAC

Mick Jagger - 1988 Deep Down Under my silvers
FLAC

And I also have the dvd on the second post...

Quote
stonesmuziekfan
I have little time, but these are in Stonesvault.
Will look for more next week. 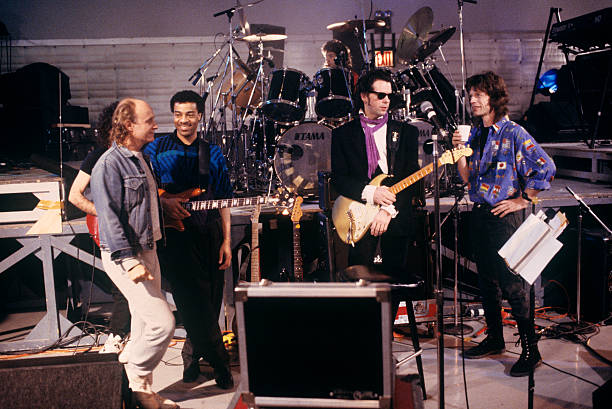 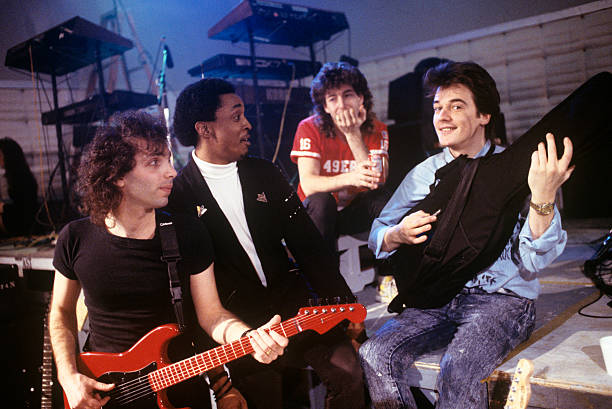 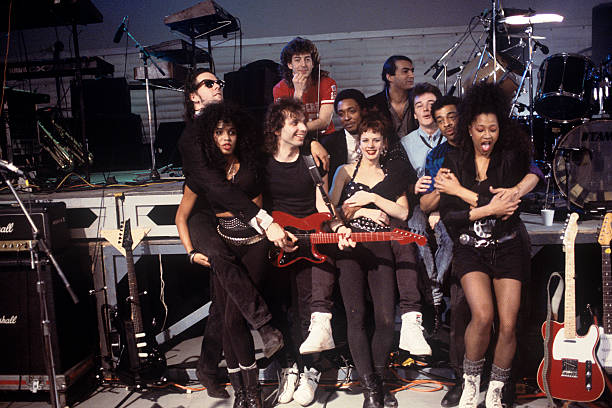 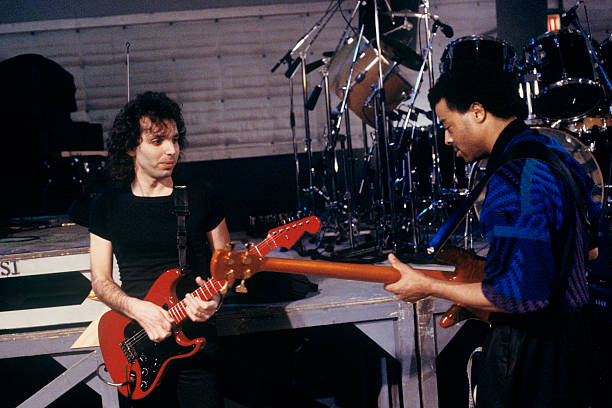 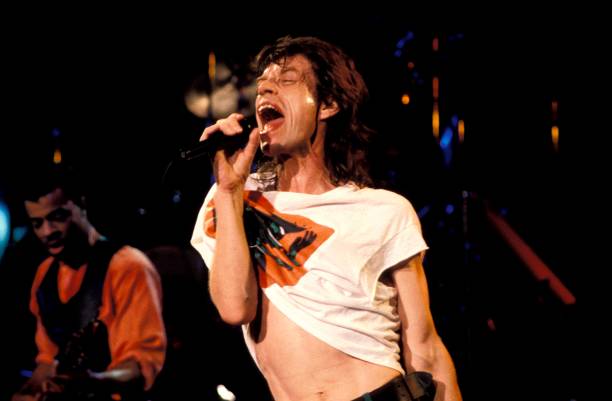 
Mick Jagger looks satisfied. Sipping black Twinings tea in his suite in the Sebel Townhouse, in Sydney, Australia, the forty-five-year-old superstar looks like an Englishman on holiday.

He has every reason to feel relaxed. Jagger is halfway through his first solo tour of Australia, and things couldn’t be better. The six-week working vacation has been front-page news. Dates have been added, the houses full, and the reviews universally favorable. The problems of the Rolling Stones, the sluggish sales of Jagger’s album Primitive Cool and the gibes of his old friend Keith Richards – who tagged Jagger’s touring group as a “jerk-off band” – seem half a world away.

“I don’t really want to talk about Keith’s problems,” Jagger says flatly. Jagger is circumspect whenever the subject of his old band comes up, refusing to be drawn into a discussion of Richards’s recent remarks in Rolling Stone (the Rolling Stone Interview, RS 536). Jagger says he hasn’t read the interview and doesn’t want to.
It would seem that the singer is still very much interested in the Stones as a going concern and doesn’t regard himself as the man who broke up “the greatest rock & roll band in the world.” “I’m afraid life isn’t quite that simple,” he says. “I wanted to take the Stones on the road this year. Keith was too busy, and we talked about doing it next year. That’s sort of up in the air at the moment.”

Instead, the twenty-three-date Australian tour – with shows in New Zealand and Jakarta, Indonesia – has been a test for Jagger: whether, after six years off the road, he can still cut it onstage. “When you leave something alone for such a long time, you get out of touch with yourself as a singer and performer,” he says. “So I decided to see what I could do, and it’s worked out quite well. It was pretty hairy in Japan for a moment.”

The Jagger tour has been a stop-and-go affair since the first warm-up appearances in the United States last year, when Jeff Beck was playing guitar. After a brief series of concerts in Japan in March, Jagger postponed all further dates. “It wasn’t really enough gigs to feel you were on tour,” he says. “That’s one of the reasons I’ve done all these shows in Australia: to do twenty gigs and see how it feels.”

Jagger kicked off the Australian swing with an impromptu club appearance at Sydney’s 700-seat Kardomah café. Since then, Jagger has been playing halls of between 12,000 and 15,000 seats. More than 180,000 people will see the concerts at thirty Australian dollars a ticket. The shows have been characterized by a fairly intimate atmosphere, with the emphasis on a tough rock & roll sound. The stage, completely redesigned for Australia, is decorated like a desert truck stop – a mixture of Mad Max and The Petrified Forest.

With only occasional help from video projections, Jagger and his band – Simon Phillips on drums, Doug Wimbish on bass, Joe Satriani and Jimmy Ripp on guitars, Phil Ashley and Susie Davis on keyboards and vocalists Bernard Fowler, Carol Kenyon, Jenny Douglas and Valerie Scott – have relied solely on their musical abilities to put over the two-and-a-half-hour shows.

Onstage at the Sydney Entertainment Centre, Jagger was more than generous with the spotlight, and Carol Kenyon briefly stole the show with her vocal introduction to “Gimmie Shelter.” The set opened with three of Jagger’s solo songs, including “Just Another Night” and “Lonely at the Top,” before hitting a funky version of “Honky Tonk Women.” It was, by any standards, an eclectic selection, ranging from “Ruby Tuesday” to “One Hit to the Body” and “Harlem Shuffle,” from Dirty Work.

Perhaps the show’s most curious offering was “The Wild Colonial Boy.” One of Australia’s best-known folk ballads, it was sung by Jagger on the soundtrack of the film Ned Kelly (released in 1970), in which he played the Australian outlaw. The fact that it was Jagger’s first non-Stones recording was not a little ironic.

While the members of the audience clearly favored the Stones’ material, they were more than appreciative of the lesser-known solo tunes, like “Radio Control,” “War Baby,” the country-styled “Party Doll” and, in particular, a controlled and emotional version of “Primitive Cool.” Toward the end of the set, Jagger threw in a new song called “What Kind of World Is This?”

The band’s strength ultimately lay in its ability to move from Sixties classics to Jagger’s more recent material and do justice to both. But Jagger was clearly the focus of attention, dominating the stage through sheer energy. The relatively small venue freed him of the grand gestures that are required in stadiums. He concentrated on delivering some tough rock & roll, closing the show with a breathless version of “Satisfaction.”

No doubt now that Jagger has put almost nine months of effort into this band – and finally feels it’s capable of doing what he wants – there’s going to be the temptation to keep the group together. Jagger has gone a long way from slapping together some younger musicians and has actually welded them into a rock & roll band.

But where does that leave the Rolling Stones? “If the Stones go on stuttering and not really starting, then obviously I’ll have to . . . ,” he says, trailing off. “Now that I’ve got the taste of playing onstage again, I’ll carry on doing it. If the Stones start up again and everything is a great, fun, pleasurable success, then I won’t do so much of it. 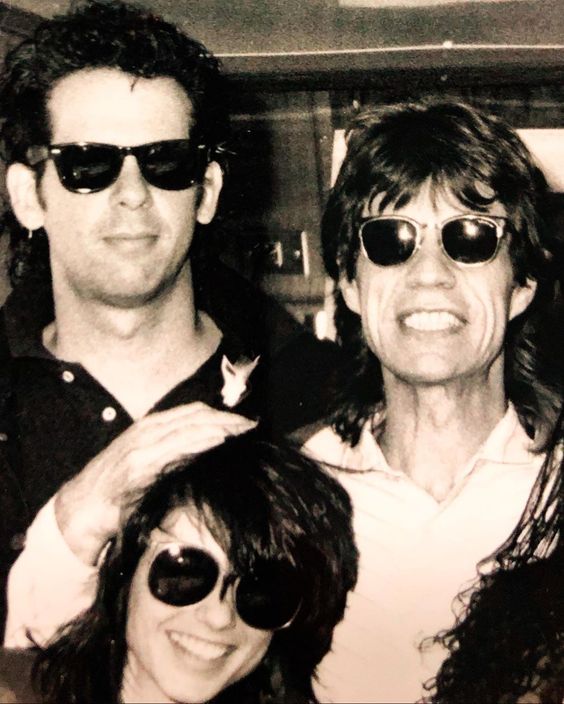 "As happy as the Rolling Stones had made me during my teen years,
they also left me anxious. I was worried that I would die without seeing them
in person. The Stones had not visited New Zealand since 1973—when I was four.
(See also The Rolling Stones in New Zealand 1964-65.) Each new year brought
breathless rumors of a tour, and inevitable disappointment. Time was running
out. They were hitting their 40s and getting old! A feud between Mick and
Keith essentially broke the band up by 1986, and they pursued solo endeavors
while slagging each other off in the press.

I flew to Sydney in 1988 to see a pair of shows on Mick’s solo tour of
Australia. He sported a mullet and played a bunch of Stones tunes with a Keith
lookalike on guitar who was banging the hottie keyboardist. It was good enough
for me, and a rare opportunity to see Mick play some solo tunes. A few weeks
later, he flew to New Zealand for a show at Auckland’s Western Springs
speedway, his first visit to the country in 15 years. It was big national news.

Like the hoi polloi, he had to clear customs and brave the airport arrivals
area where a mob of fans and journalists (including me, see photo) awaited him.
He cut short an impromptu news conference after I dared ask what he thought of
Keith’s debut solo album. “I haven’t heard it yet. I’m hoping he’ll send me a
review copy. Bye!” The next day at a reception, his consigliere scolded me for
my impertinence and said I had been blacklisted. As Mick was leaving the party, he shook my hand and said, 'I remember you from the airport.' ”


Read More at www.deangoodman.com/rolling-stones/ Dean Goodman
Options: Reply To This Message•Quote This Message
Re: POST & ISO: Mick Jagger - Deep Down Under
Posted by: gonzalo76 ()
Date: April 12, 2022 21:06

And exilestones what a great informative thread you have going!
It’s nice to see it all in one place.
Options: Reply To This Message•Quote This Message
Re: POST & ISO: Mick Jagger - Deep Down Under
Posted by: exilestones ()
Date: April 13, 2022 08:54

And exilestones what a great informative thread you have going!
It’s nice to see it all in one place. 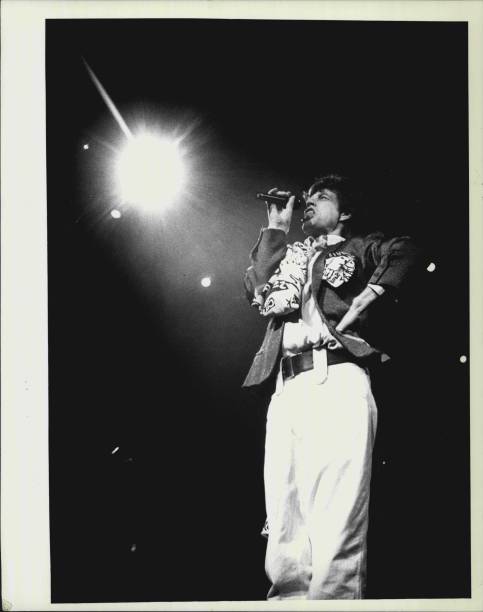 One night in October 1988, Jagger and his top-flight backing band paid a visit to
the 700-capacity Corner Hotel in Melbourne for a now-legendary secret gig. Playing
under the name the Brothers of Sodom, Jagger and Satriani were joined on stage by
bassist Doug Wimbish, guitarist Jimmy Rip and drummer Simon Phillips.

And exilestones what a great informative thread you have going!
It’s nice to see it all in one place.

Thanks. It's a fun hobby. Keith makes me laugh, "Jerk-off band!"

Yeah I got a chuckle out of that too

Quote
wiredallnight
"Deep Down Under", mpg file with stereo audio:

Quote
fortilix
Mick Jagger - THROUGH THE YEARS my silver
FLAC

Mick Jagger - 1988 Deep Down Under my silvers
FLAC

Quote
wiredallnight
"Deep Down Under", mpg file with stereo audio: 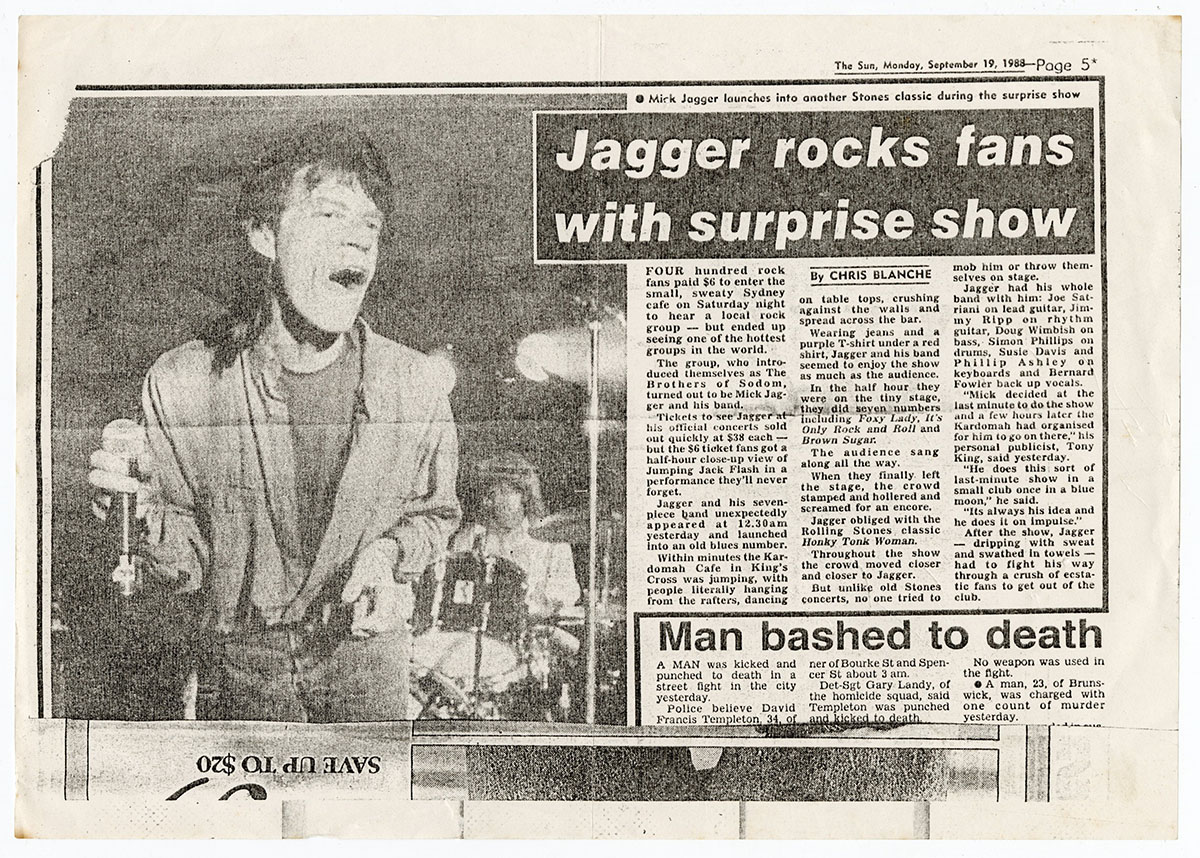 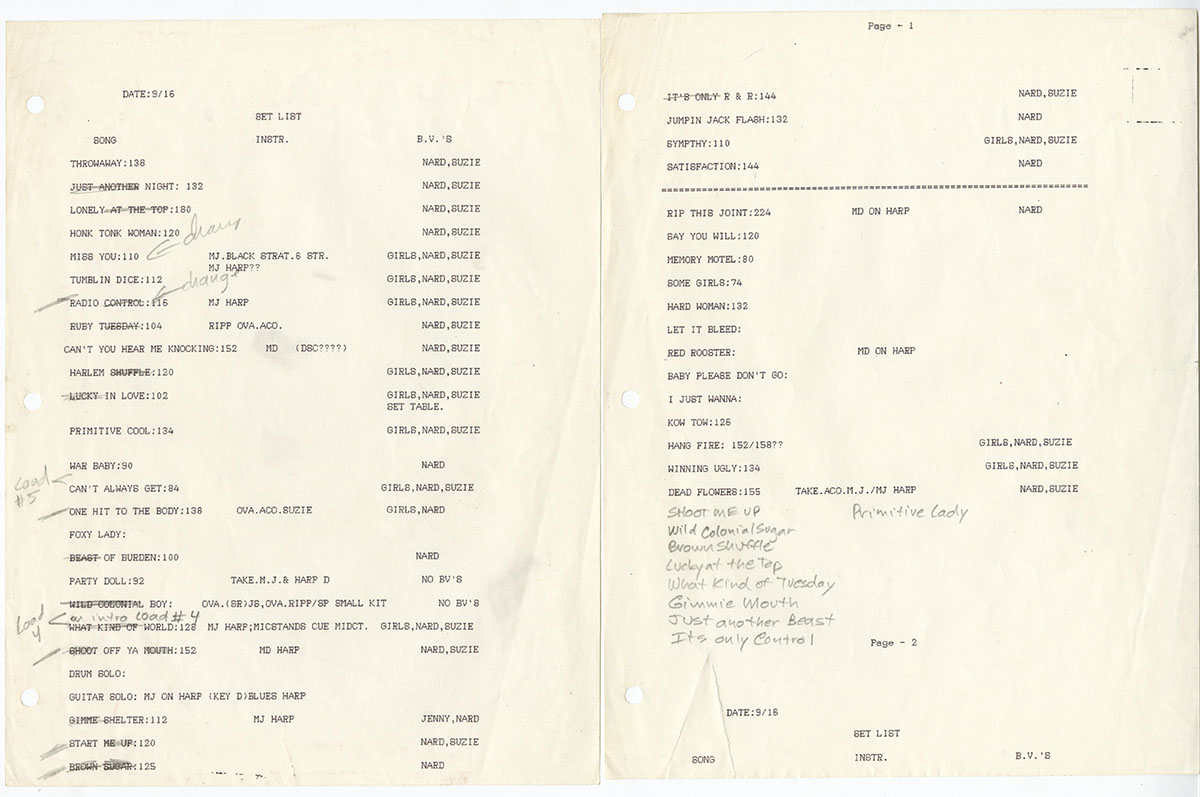 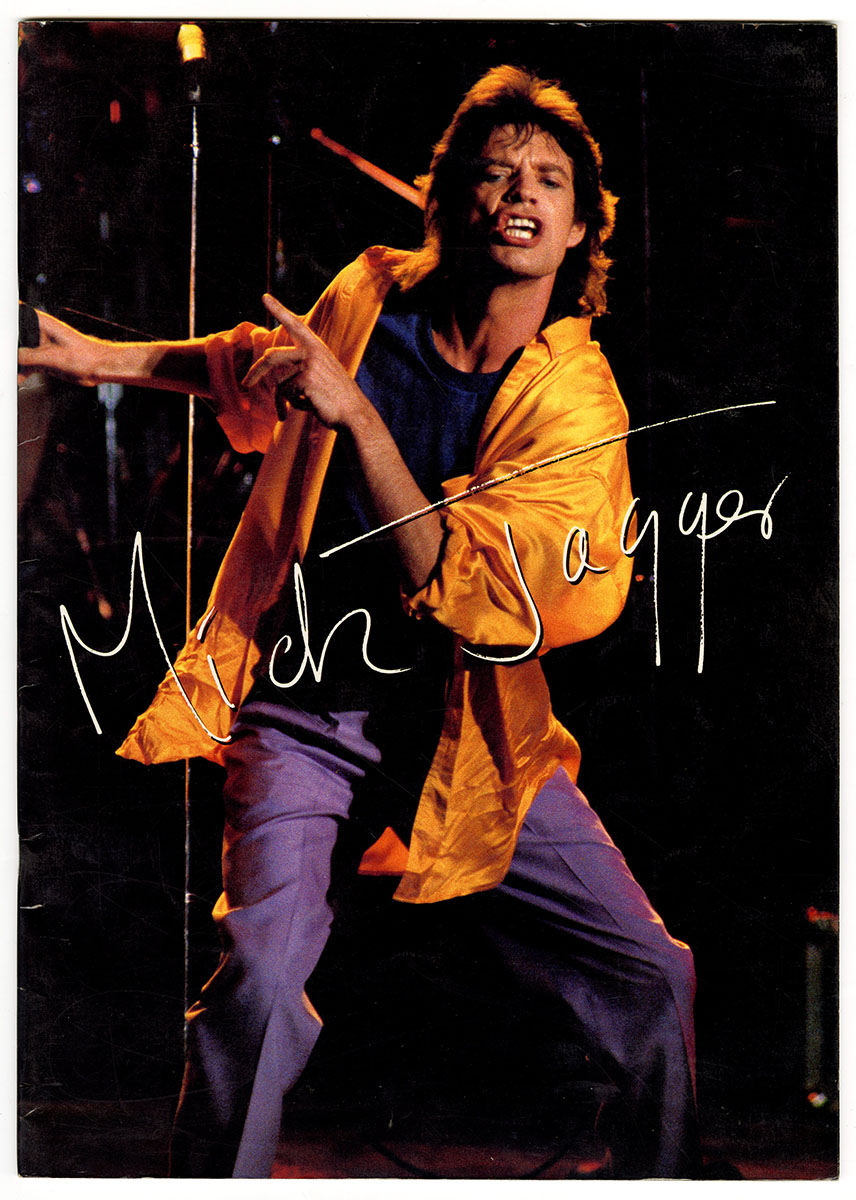