you think? i think a lot more than that notice, even if they don't know what they're noticing -
but maybe that's just because i resonate so much to the guitars that i can't imagine what other people are hearing.
and i admit freely: i'm glad i can't.

ps: on the other hand, didn't Keith once say something like: "i make 'em all sound alike anyway"? :E

Edited 1 time(s). Last edit at 2007-06-20 20:20 by with sssoul.
Options: Reply To This Message•Quote This Message
Re: Lyon reports
Posted by: phd ()
Date: June 20, 2007 20:16
Marclaff, your report is just how it was. I hope BV will insert it in the show report. You wrote " Keith of Riff", Toomuchforme " Keith the King", myself " Keith King of Lyon". All of this is true. This man is the Rock. Such a ressurection after the debacle of Paris. A souvenir just comes right now : even if you don't like him ( I ain't a fan myself) : at the Central Park gig in 1981, Art Garfunkel says with deep and sincere emotion turning to the huge audience : " What a night". That's how I still feel about it. I have to underline also as others the performance of Mick. His running at the end of the show from the stage to the b-stage was overwhelming. I don't remember him doing this last year. But I must be wrong. " What a sound".
Options: Reply To This Message•Quote This Message
Re: Lyon reports
Posted by: stoneswashed77 ()
Date: June 20, 2007 20:17
Telecasters from the 50´s are light weight, there are only a very few that are heavy and some are extra light weight. the extra light weight ones are most precious because of the weight and more important for sound. i can imagine but i don´t know that keith´s 50´s teles are light, and if he said one is extra light i can imagine that this is propably the best sounding one acoustically.
teles from the late 60´s are usually heavier especially if made of ash.
the 67´ sunburst tele from keith is made of ash. what i want to say is i can hardly imagine that this one is lighter than the 50´s teles.

that blond tele with rosewood fretboard is from 1959 if i am not mistaken and tuned in standard tuning i think and not open g tuning.

Gibson guitars from the early 60´s can also be light. in the early 60´s the neck was also thick but very comfortable and very easy to play.
Gibson guitars in general are a lot easier to play than Fender guitars.
The difference in playability between the les paul junior and the es 355 is not big. if i had to guess i would say the 355 plays even better and easier.

because of the fact that these guitars from the 50´s and early 60´s are handmade there is not one like the other. guitarist are very sensitive to slight changes in profile which makes a huge difference in feel for a guitarist.
but you really need to touch it to know which one you like or not.

what i can imagine is that keith doesn´t feel comfortable with the wide body of the 355. the les paul junior is maybe easier to handle due to smaller dimensions and also the balance between neck and guitar body is different and more comfortable.i think weight and playability of fretboard are close.

Faith restored, I should give it another go near the end of the tour...hope there'll be some affordable tickets for Dusseldorf by then.
Options: Reply To This Message•Quote This Message
Re: Lyon reports
Posted by: toomuchforme ()
Date: June 26, 2007 01:53


end of JJF + outro + fireworks
Options: Reply To This Message•Quote This Message
Re: Lyon reports
Posted by: only stones ()
Date: June 27, 2007 01:07
italians fans in Lyon
Sici 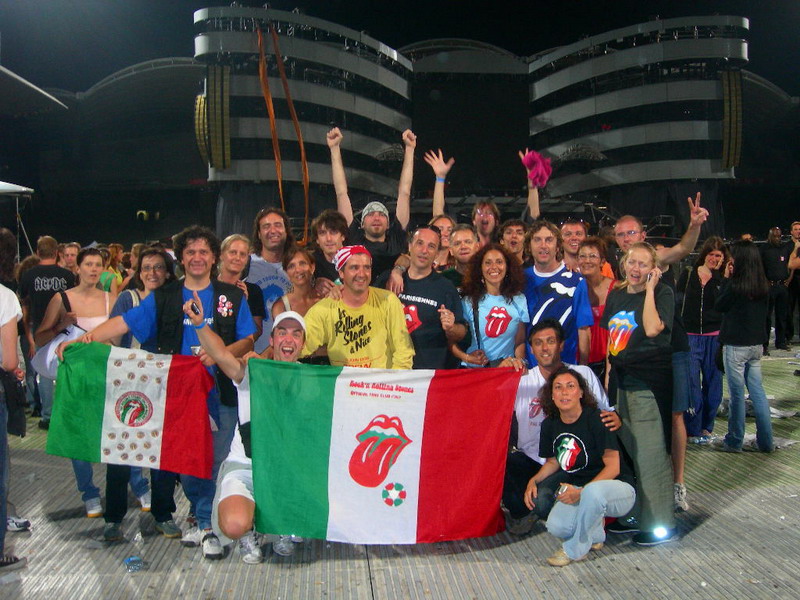