Goto Thread: Previous•Next
Goto: Forum List•Message List•New Topic•Search•Log In•***Print View
O.T. Dusty Springfield on BBC 4 UK Friday May 8th.
Posted by: crawdaddy ()
Date: May 6, 2020 18:31
Two hours of Dusty documentary and BBC performances from 10pm till midnight.
Seeing as the Pubs are shut, I will be in front of my TV at home with a few lagers watching the best British female singer who I was lucky to see live once.

Let`s hope my own state channel gets hold of this for national broadcast.

Whichever song she sang, she made her own: [www.youtube.com]

In addition to being a musician herself, she could also write an occasional B-side: [www.youtube.com]

The hallmark of Dusty's singing style is the sense of unfulfillable longing she brought to every performance, especially on record: [www.youtube.com]

I've never once heard or read of Dusty Springfield being described as unattractive,
but I suppose there's just no accounting for the taste of some folks:

In 1968 Dusty Springfield was being produced by Atlantic Records A&R man Jerry Wexler for album sessions in Memphis, during which she mentioned to Wexler that her bass player had just joined a new group that was looking for a break. Based on that recommendation alone, Wexler signed the group to the Atlantic label for a contract worth more than $200,000, the largest of its kind at the time, without ever having heard a single note of their music.

The bass player in question was John Paul Jones, who had played bass and done string arrangements for her 1968 album Dusty...Definitely, her last with England's Philips label, and the group in question was of course Led Zeppelin.

Dusty made a few unwise career decisions in later years:

In the early 1970s, she was the first to be offered the song Killing Me Softly; she declined, and it was made famous by Roberta Flack instead.

Elton John had sung backup on some of her earlier recordings and asked her to record a duet with him. Her management got into a row with Elton's management, and the recording never happened. Instead, Elton recorded with Kiki Dee, and their duet Don't Go Breaking My Heart was a huge #1.

In the late 70s she was offered a James Bond theme, but turned it down; the song went to Carly Simon instead, whose version of Nobody Does It Better for the film The Spy Who Loved Me was another huge and memorable hit.

Dusty eventually returned to chart success in the late 80s with the help of the Pet Shop Boys: [www.youtube.com]

Options: Reply To This Message•Quote This Message
Re: O.T. Dusty Springfield on BBC 4 UK Friday May 8th.
Posted by: Paddy ()
Date: May 7, 2020 06:01
Thanks for the heads up on this, I’ll be taking a look, with my own brand of relaxing vice.

So glad I saw her live back in the 60's at Kingston Granada I think, when Dusty was the main act in an all star show
She was on stage for about half an hour I guess.
Great Days of live music back then. 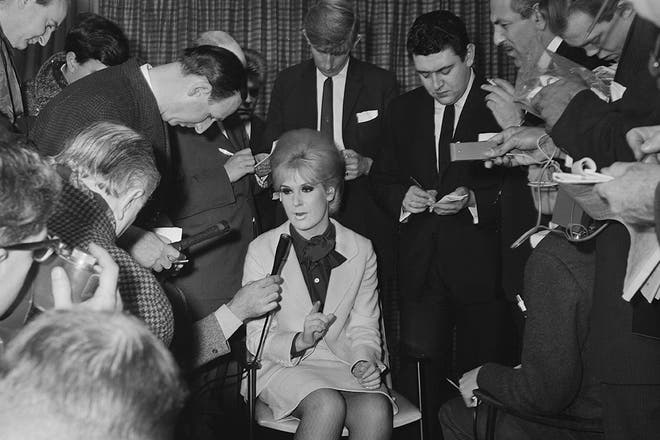 ROCKMAN
Options: Reply To This Message•Quote This Message
Re: O.T. Dusty Springfield on BBC 4 UK Friday May 8th.
Posted by: crawdaddy ()
Date: May 8, 2020 18:57
Looks like the two programmes will be on BBC i-player soon after broadcast.
Usually on there for 28 days for anyone in UK.
I may have seen the documentary before, but always good to see anything on Dusty with not much on the Telly these days.
Will go down well with a few cans of Bud Light.

ROCKMAN
Options: Reply To This Message•Quote This Message
Re: O.T. Dusty Springfield on BBC 4 UK Friday May 8th.
Posted by: crawdaddy ()
Date: May 9, 2020 20:16
I had seen the documentary before, but it was well worth watching again.
Great to see so many of her performances again and loved 'Some of your lovin' which is a fave of mine.