We originally had tickets for a 4:00 pm matinee show which was suddenly cancelled. On the day of the show, we were dejected.

The night of the concert, our much older cousin had gone down to the Spectrum, hoping to buy a ticket. A few hours before the show, we got a call from him outside the Spectrum. He had found this guy with dozens of tickets to that night's show. He even got the ticket guy to talk to us on the phone. Ticket Guy tells us that he is sympathetic to the plight of people who had purchased tickets to the cancelled show, and he is willing to swap tickets from the cancelled afternoon show for tickets to the sold out evening show. He'd redeem the cancelled tickets later at the box office for face value, he explained. He promised to save eight tickets for us. Imagine this nowadays.

We piled frantically into the car, and drove to the Spectrum, 45 minutes away. We were going to see the Rolling Stones after all!

We found our cousin, who introduced us to the generous Ticket Guy. He was surrounded by many people, all eagerly buying tickets. Not surprisingly, he had raised his price a bit since we had spoken to him. He was now asking for $10 for the tickets. Imagine that. For us, however, Ticket Guy kept his word, exchanging the tickets at face value: just $7.50.

Imagine any of this nowadays!

I remember thinking at the time, that we must be an odd looking group... We probably looked like a lot of people you'd see at a Stones concert nowadays. 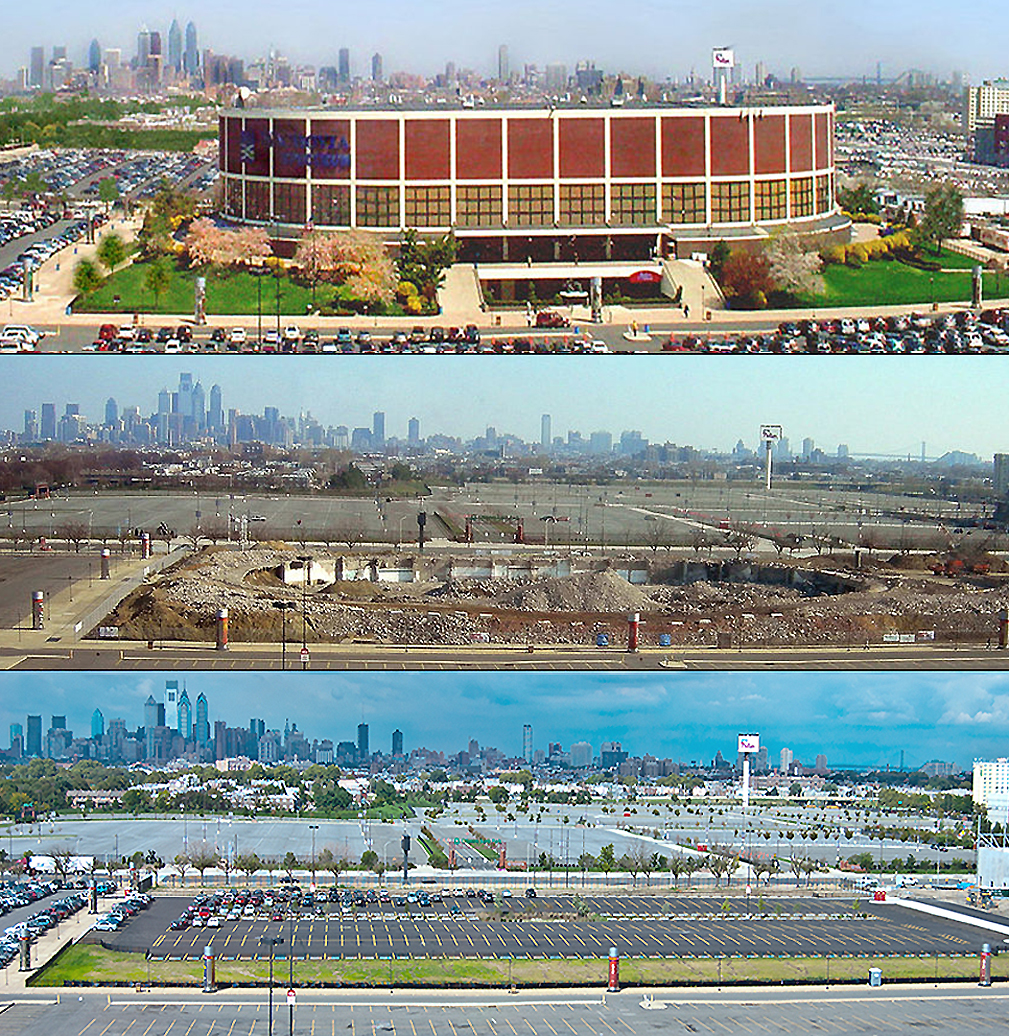 Composite "before, during and after" image of the Spectrum site. The top image was taken in April 2004, five-and-a-half years before the arena was closed. The middle image was taken seven years later as its demolition was being completed in April 2011. The white areas seen at ground level of this image were the back walls of the hockey and basketball locker rooms used by the Flyers, 76ers, Phantoms, Kixx, and Wings and visiting teams. The parking lot across Pattison Avenue from the Spectrum was the former site of Veterans Stadium (demolished in 2004). The bottom image is how the site appeared in September 2011 after it had been converted to a parking lot. All three images were taken from the same location in the Wells Fargo Center, the arena that replaced the Spectrum.

I'm curious about that show. It's sandwiched between two notoriously FANTASTIC cousins (Detroit the night before and Baltimore the night after); but you don't hear that much about the Philly show. I'm assuming it was pretty damn good, given the level the band had reached by that time in the tour -- do you have any special musical memories of the performance?
Re: Fifty Years Ago Tonight ... my first Stones Concert - Philadelphia Spectrum 1969
Posted by: schillid ()
Date: November 26, 2019 23:32
It was so long ago... it's difficult to really remember
Re: Fifty Years Ago ... my first Stones Concert - Philadelphia Spectrum 1969
Posted by: Rolling Hansie ()
Date: November 27, 2019 10:13

Re: Fifty Years Ago ... my first Stones Concert - Philadelphia Spectrum 1969
Posted by: RWFish ()
Date: November 27, 2019 14:07
Rolling Stones, Baltimore Civic Center, November 1969 was my first rock concert ever. I was 17 & have been a Stones fan since the beginning. They were hours late coming to the stage [normal behavior for '69 tour] but.... they were fantastic. Midnight Rambler was the centerpiece of the show: Boogie blues + music theater all bathed in blood-red lights. To this day, one of the coolest things I've seen on stage. Let It Bleed had only been released days before the show, yet they featured three songs from the album + You Got To Move which wasn't released until 1971. That show set a very high bar for every concert I saw thereafter.
Re: Fifty Years Ago Tonight ... my first Stones Concert
Posted by: schillid ()
Date: November 27, 2019 16:37
There were three stadiums in a row for several years (front to back): JFK Stadium, The Spectrum, Veterans Stadium. The Stones have played at all three ... 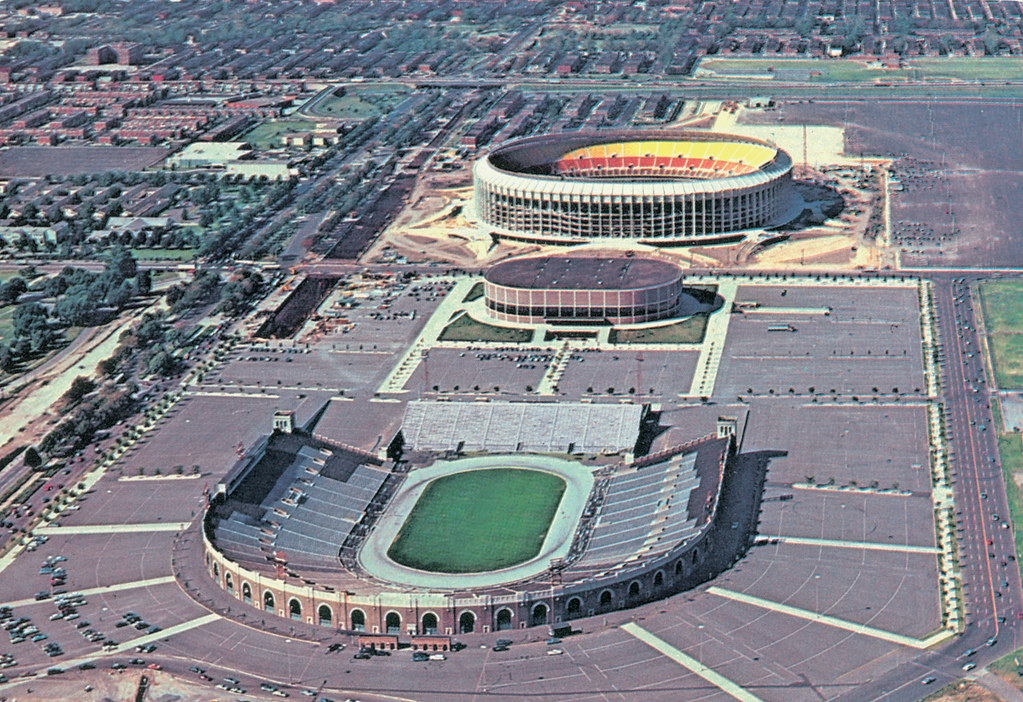 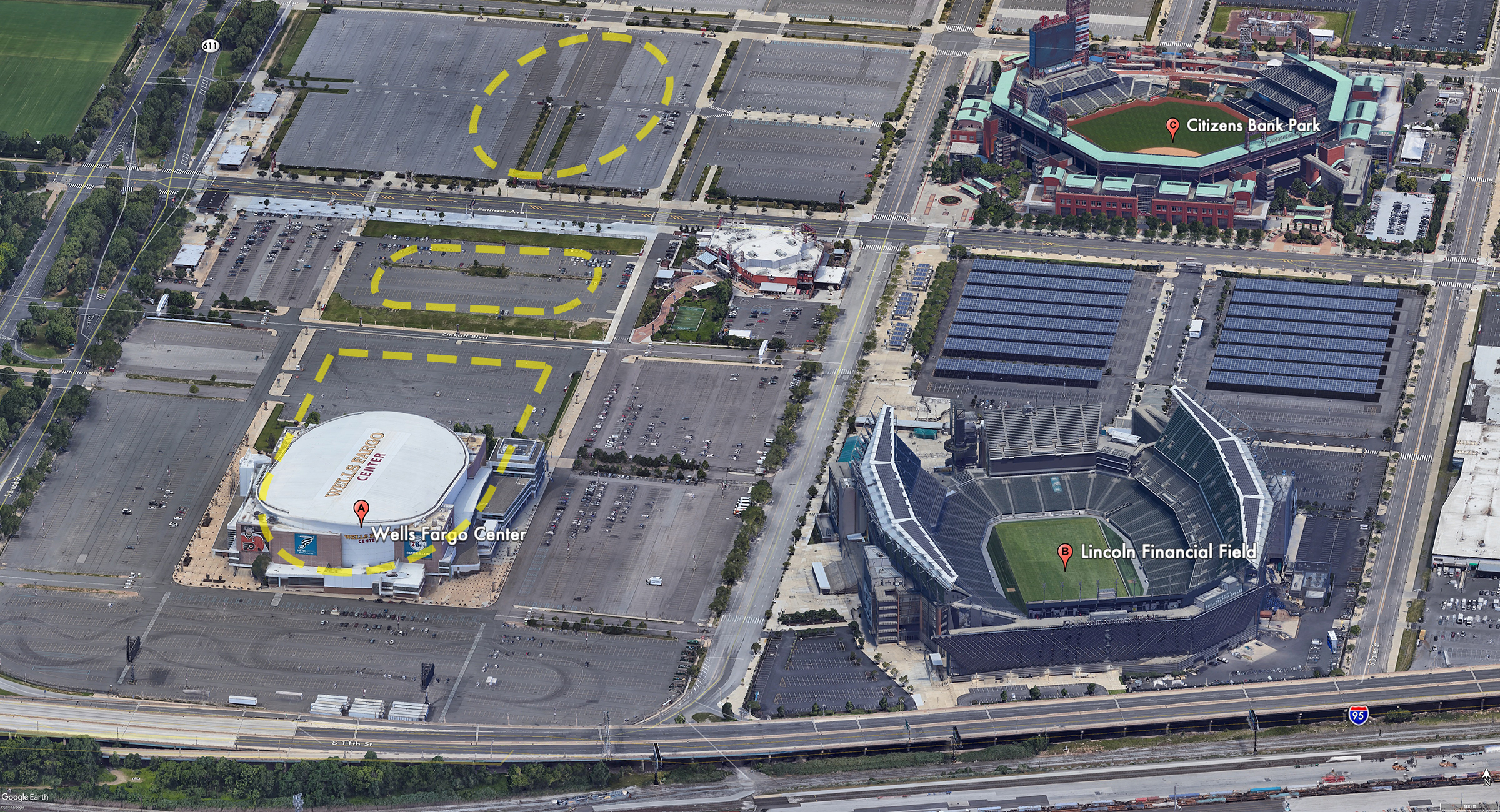