Quote
SomeTorontoGirl
It should be in your collection, Matt!

Haven't seen it yet.You going to any UK shows?
Options: Reply To This Message•Quote This Message
Re: Rolling Stones Mobile Studio
Posted by: SomeTorontoGirl ()
Date: April 3, 2018 00:00

Quote
SomeTorontoGirl
It should be in your collection, Matt!

Haven't seen it yet.You going to any UK shows?

Most of ‘em. And hoping to catch Mattxhibitionism.

Something from '70 Europe recorded by the Stones themselves.
Options: Reply To This Message•Quote This Message
Re: Rolling Stones Mobile Studio
Posted by: Cristiano Radtke ()
Date: February 14, 2019 15:42
Blues duo Harpoonist and the Axe Murderer to record at King Eddy using Rolling Stones' mobile studio

There is probably no official consensus on what gritty, blues-soaked rock ‘n’ roll should smell like.

But a good case could be made that the inside of the Rolling Stone Mobile Recording Studio, currently housed at Studio Bell’s National Music Centre, is the closest we may get to a rock ‘n’ roll bouquet.

“You should smell this thing,” says vocalist and harmonica player Shawn Hall, the Harpoonist half of Vancouver’s Harpoonist and the Axe Murderer. “You take one whiff of the inside of the truck and you can smell diesel and cigarettes. It’s just incredible. You know that so much has taken place within the walls of that thing that you want to be part of a continued lineage of stuff that happens in there.”

The blues duo, which also features guitarist Matthew Rogers, will become part of the famed mobile recording studio’s continued lineage by recording an album at Calgary’s King Eddy. Starting Friday, the band will be using the studio to capture three raucous live shows at the historic and recently revamped night spot. But this isn’t just a case of recording material live off the floor. Alongside vocalists Dawn Pemberton and Alexa Dirks and Deep Dark Woods keyboardist Geoff Hilhorst, Hall and Rogers plan to make an old-school live record, a notion that seems to have fallen out of fashion in recent years. Now in its 12th year and with five studio records under its belt, the band figured it was time to capture their blistering live shows.

Hall says he liked the idea of presenting their on-stage sound without “digital assistance,” harkening back to some of the classic live records from the 1970s.

“I remember live records having more of an arc in the ’70s, more of a storyline,” Hall says. “There was thought to the sequence, there were these arcs. There was a lot more warmth that allowed for natural distortions and voices you would hear yelling out from the crowd. It didn’t sound crystal clear but it sounded clear enough that you could hear where it was coming from. Aretha Franklin Live at the Filmore (West), there was not a better record where you could hear a relationship between the performer and distinct people in the crowd. That is something that has been kind of lost. If you’ve grown up listening to these records for 20, 30, 40 years, you wondered who those people were. Who was that voice? Where did that joke come from? Where’d that heckle come from?”

“You want to get that. How do you capture that spirit?”

The mobile unit has captured some decidedly famous spirits during its lifetime. Live! by Bob Marley and the Wailers, Alchemy: Dire Straights Live by Dire Straits, the B-side of Neil Young’s Harvest and Lou Reed’s Live in Italy were all recorded using the studio. But it wasn’t just live recordings. The mobile was also behind Rolling Stones’ classics Exile on Main Street and Sticky Fingers and Led Zeppelin’s Zeppelin III and Zeppelin IV.

These days, the Rolling Stone Mobile Recording Studio isn’t actually mobile, although it is still on wheels in its new home at the centre. Purchased in 2001, decades after a private buyer bought it at auction from the Stones’ former bassist Bill Wyman, the National Music Centre kept the beast in storage outside of Calgary until the National Music Centre’s permanent home was built in 2016. The late John Leimseider, the centre’s electronics technician who passed away in September, and Jason Tawkin, the current manager of building audio for the centre, restored the studio a few years prior to the NMC’s grand opening. Leimseider called it the “Sistine Chapel of rock ‘n’ roll.”

“We had to basically build the building around it,” Tawkin says. It is now permanently parked beside and wired to the King Eddy. The Harpoonist and the Axe Murderer are not the first to use it. Calgary’s psychedelic rockers The Wheel recorded its New Year’s Eve show and intends to release it as a live album.

The studio was created in 1968, when the Stones were among the biggest bands on earth and well-heeled enough to buy “the best-of-the-best” in recording equipment to outfit the truck. The Helios console at the heart of the studio was custom-built for the truck and only the second console Helios ever made. So, the quality of the recording equipment alone is reason enough for bands to be enthusiastic about using it to record.

“It would have been a very expensive purchase but (The Rolling Stones) didn’t really care because it was for their music,” says Tawkin. “They wanted to capture their music in the highest fidelity possible. So because of that, let’s call it lack of frugality, that’s why this equipment has stood the test of time.”

Still, no matter how amazingly built the equipment was, part of the charm of using the mobile studio is the inspiration provided by whatever ghostly remnants still haunt the truck from its illustrious and colourful past. One of the more wonderfully absurd stories is the studio’s connection to Deep Purple’s Smoke on the Water.

The British heavy metal band intended to use the mobile studio to record their new album at Montreux Casino in Switzerland. The night before they were to begin, Frank Zappa was playing the venue and the mobile studio was already parked beside it. An unruly fan shot a flare into the ceiling of the casino, burning it to the ground. The Rolling Stone Mobile Studio almost went up in flames with it.

“Someone was able to smash the window and put it into neutral and push it out of the way,” Tawkin says. “So, the song Smoke on the Water is about that event.”

The song, which begins with the lines “We all came out to Montreux on the Lake Geneva shoreline, to make records with a mobile,” would become the band’s most famous. They eventually relocated to another casino with the mobile studio and used it to record their 1971 classic Machine Head.

As with all of the historic equipment at the centre, the Rolling Stone Mobile Recording Studio was purchased and lovingly restored so it could be used by a new generation of bands. Tawkin says live albums by The Wheel, and Harpoonist and the Axe Murderer are hopefully the first of many that will be captured at the King Eddy.

“We hold our collections in trust for the public and maintain and keep them active for the musical community to use,” says Tawkin. “They can use this amazing stuff to continue this musical heritage. That’s really important to what we do and what our collecting philosophy is. It would be easy to put it behind glass and do tours. But the thing was built to make records and we have every intention to make records with it. I love all those records that the truck has made but they’re kind of worn out. I’ve listened to them so many times. I’m really excited by the records we will make with the truck.”

The Harpoonist and the Axe Murderer will perform at the King Eddy from Feb. 15 to 17. The Feb. 15 and 16 shows are sold out. Tickets for the Feb. 17 matinee performance at 3 p.m. were still available as of press time. Contact kingeddy.ca for details.

Paris? I have a hunch they have all three Paris'70 shows in perfect quality in the Stones vaults...
Options: Reply To This Message•Quote This Message
Re: Rolling Stones Mobile Studio
Posted by: SKILLS ()
Date: February 14, 2019 23:30

Paris? I have a hunch they have all three Paris'70 shows in perfect quality in the Stones vaults...

Now that would be something to get, all 3 nice box set, packaged with some Gauloises a cheeky beaujolais and a microwavable baguette
Options: Reply To This Message•Quote This Message
Re: Rolling Stones Mobile Studio
Posted by: Rockman ()
Date: February 14, 2019 23:30
If walls could talk ………..

ROCKMAN
Options: Reply To This Message•Quote This Message
Re: Rolling Stones Mobile Studio
Posted by: Ricky ()
Date: July 28, 2022 00:50
I hope it wasn't posted before:

Quote
Rockman
If walls could talk ………..

Quote
SomeTorontoGirl
...restored and on display in Calgary.

It look nice.
Here's the original brochure to compare. Quote
ProfessorWolf
thank you never seen this before

yeah it took me years to get one.

Quote
Dbs1972
I seem to recall that Glyn Johns stated in his book that although they shipped the mobile studio truck over to France in 1970, none of the recording equipment inside was actually operable. Therefore, nothing was recorded from that tour.

Then why would they ship it?
Options: Reply To This Message•Quote This Message
Re: Rolling Stones Mobile Studio
Posted by: Rockman ()
Date: August 4, 2022 02:43
shares in the shipping company ??????

See how it handles at full revs on the bends .....

The album will also feature recently-recorded tracks with the surviving members of the Rolling Stones and Water's 21-year-old son Tommy.

Stewart was the man behind the Rolling Stones mobile studio that now lives at the National Music Centre at Studio Bell, which will be used to record parts of the show.

[calgary.ctvnews.ca]
Options: Reply To This Message•Quote This Message
Re: Rolling Stones Mobile Studio
Posted by: Spud ()
Date: August 12, 2022 15:22
If you showed them the mobile studio today [or any studio for that matter ! ]

The album will also feature recently-recorded tracks with the surviving members of the Rolling Stones and Water's 21-year-old son Tommy.

Stewart was the man behind the Rolling Stones mobile studio that now lives at the National Music Centre at Studio Bell, which will be used to record parts of the show.

Thanks for this.. "recently recorded tracks with the surviving members"
Should be interesting to see how recent.. and what/how many tracks they played on.

Nice to see the mobile in use again 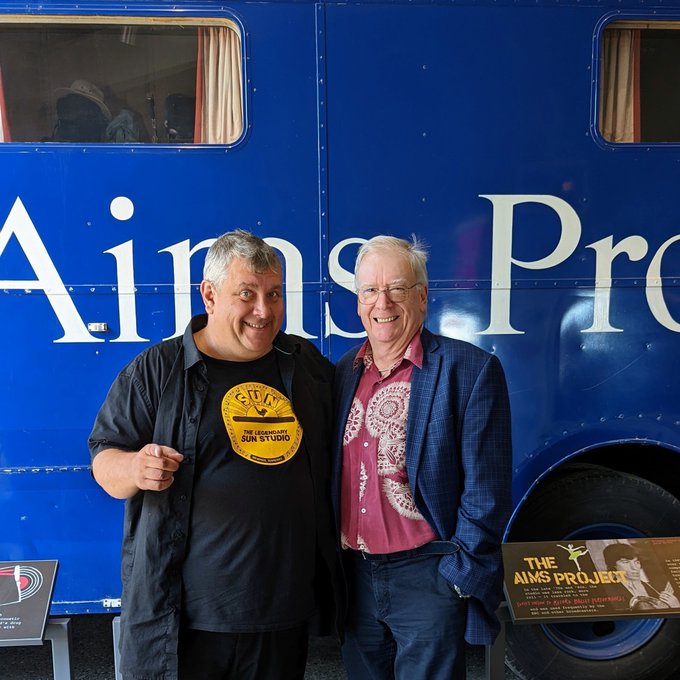