Quote
Cristiano Radtke
It's always great to be here and it's even better when we know there's a Stones concert going on. I'm looking forward to meet you all here.

Go for Just My Imagination.
LSTNT out of the set? Wrong! Here is very popular like Under My Thumb or Angie.
Alejandro
Options: Reply To This Message•Quote This Message
Re: Montevideo, Uruguay Rolling Stones 2016 show and travel info
Posted by: 1962 ()
Date: February 15, 2016 19:54
the stadium will be full? It is large enough about 70.000 capacity.

Bjornulf
Options: Reply To This Message•Quote This Message
Re: Montevideo, Uruguay Rolling Stones 2016 show and travel info
Posted by: timbernardis ()
Date: February 16, 2016 05:07
What time does the show start and what time Mountain time is that?

Quote
florian
Thanks for that Great Organisation :-)
See you all at the pre Party

Hi Florian. I expected to meet you at the party in Woodstock bar tonight. Where are you? I tried to contact you by mail or whatsapp. I have your ticket for the show. Please contact me asap.

I know this is funny based on what is happening as they arrive, but in all seriousness, "Hold on to your Hat" is one the rockiest they have ever put out and would slay live in concert. I have been saying that for years (and years and years). I even predicted how good it WAS going to sound WHEN they WOULD play it for sure live on the Steel Wheel tour... and then nada... ever.
early alt version of HOLD ON TO YOUR HAT!! Rip This Joint.

Have a GREAT; GREAT show in CENTENARIO and a wonderful in my city!!
Options: Reply To This Message•Quote This Message
Re: Montevideo, Uruguay Rolling Stones 2016 show and travel info
Posted by: latvianinexile ()
Date: February 16, 2016 15:24
Good morning!

Does anyone of the locals know when they open the gates today?

Thanks.
Options: Reply To This Message•Quote This Message
Re: Montevideo, Uruguay Rolling Stones 2016 show and travel info
Posted by: waterrats ()
Date: February 16, 2016 15:25 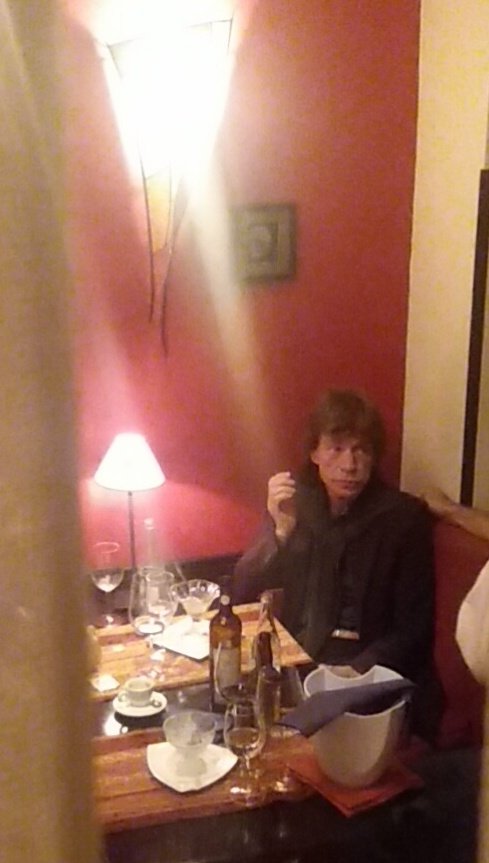 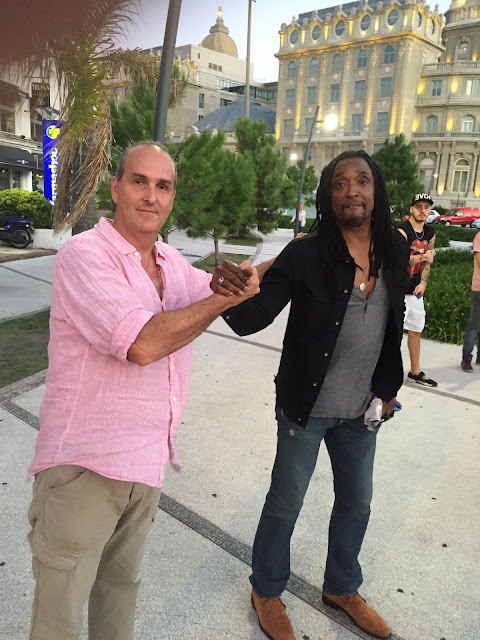 In other words:
The pre-party in "Woodstock Bar" was great, I greeting from here to the people I met there.

www.fabiosilvera.blogspot.com
Options: Reply To This Message•Quote This Message
Re: Montevideo, Uruguay Rolling Stones 2016 show and travel info
Posted by: Rockandosis ()
Date: February 18, 2016 18:31
*Some pictures of the pre-party

*Yesterday Mick met with Fernando Parrado, survivor of the tragedy of "Los Andes". 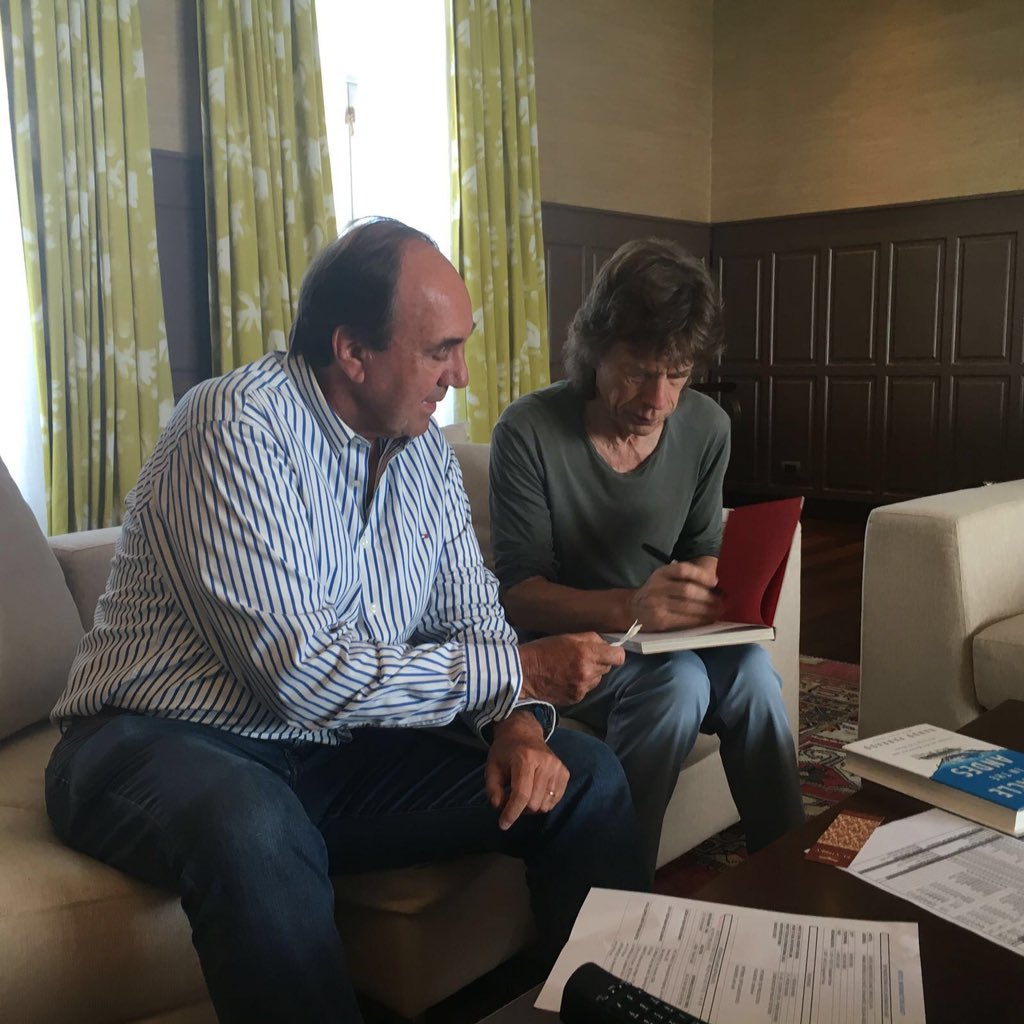 
The Rolling Stones in Uruguay: Waiting on a friend

When the Rolling Stones embarked into their first South American tour in 1995, playing five historical dates in Buenos Aires, hundreds of Uruguayans crossed the Rio de la Plata to see the band live for the first time. The same thing happened when the band returned to the neighboring city in 1998 and 2006.
At that time it was unthinkable that a show as big as The Rolling Stones could reach the small Uruguay, a country with a population of 3.5 millions, sandwiched between the South American giants Brazil and Argentina.
But things started to change, and Montevideo –Uruguay’s capital city- became an interesting place -along the natural destinations of Sao Paulo, Buenos Aires or Santiago- for rock bands and different artistic efforts.
Economics played their role in this shift. But also, the image of Uruguay as an attractive cultural destination started to grow globally, helped by its progressive politics, the discovery of its natural beauties and its melting-pot culture. Uruguay’s traditional cosmopolitanism experimented a rebirth in the last decade.
Ex- Beatle legend Paul McCartney visited Montevideo twice, playing in the historical Centenario stadium in 2012 and 2014, and the city get accustomed to welcome numbers like Blur, The Pixies, Franz Ferdinand, Vampire Weekend, Beck, Norah Jones, Black Keys, New Order or Queens of the Stone Age in these years.
Last year Montevideo was visited by Belle and Sebastian, Morrissey and The Chemical Brothers and more indie names like Hot Chip, Mac Demarco or Cocorosie also played here during 2015.
Finally, the time for the Rolling Stones arrived. For the first time ever the legendary rock band played at the Centenario Stadium on February 16 as part of their South American Olé Tour.
The Uruguayan band Boomerang was chosen by the Stones as the opening act. Boomerang formed around 2003 and they released four albums. Last year they were part of the multimedia festival South By Southwest (SXSW) in Texas.
A crowd of 55 thousand people attended the historic show. Families with kids, old couples, young and adult grownups with their parents, teenagers who were born when the Stones made their last original album coexisted peacefully as part of the audience.
Time seems not to pass for The Rolling Stones. Their songs, obviously stood the test of time, but it’s almost a miracle that the band four original members are in perfect shape and still rocking. The Stones dispatched an astounding concert based in their perennial hits, from “Jumpin’ Jack Flash” to “Sympathy For The Devil”, including classics like “Gimme Shelter”, “Brown Sugar”, “It’s Only Rock n’ Roll” or “Paint it Black”.
For the encore the band did an overwhelming rendition of “You Can’t Always Get What You Want” accompanied by the local choir Rapsodia. And they finished their show with the all time classic “(I Can’t Get No) Satisfaction”.
Mick Jagger is still one of the best rock performers and an amazing frontman. Mr. Jagger surprised the audience speaking in Spanish with Uruguayan colloquialisms, using the traditional “ta” (the Uruguayan OK). He also praised the historical Centenario, place of the first FIFA Football World Cup won by Uruguay in 1930 and talked about the mythical 1950 “Maracanazo”, when Uruguay obtained it’s second World Cup against Brazil, one of the biggest upsets in football history. He showed a Uruguayan football shirt autographed by Luis Suarez and lamented the goals Suarez scored against England in the last World Cup. The singer also joked about the disputed nationality of tango legend Carlos Gardel, declared that Ron Wood tasted the traditional chivito -the sandwich-style national dish- and said they have enjoyed candombe, the Afro Uruguayan traditional rhythm.
That later assessment was very true. One day before the show, Jagger, after having dinner in Tandory, a restaurant at the Pocitos neighborhood, unexpectedly headed to the house of the Uruguayan candombe percussionist and luthier Fernando “Lobo” Nuñez located in the traditional Barrio Sur.
Mr. Nuñez was celebrating his birthday and was accompanied by some friends. One of them was the legendary musician Ruben Rada, one of the founding fathers of Uruguayan modern music. Jagger learned first hand about candombe with two of their most prominent figures. He danced, sang “Satisfaction” with Rada accompanied by candombe drums and drank tap water.
The echoes of the Rolling Stones’ historic show in Montevideo still persist, and will still be standing for long time. It’s hard to predict if this is -at last- the final tour for the band. But the Uruguayans that attended the Centenario concert are sure that, if the Stones surprise the world with a new tour in a near future, their country will be surely included.
By Andrés Torrón
Link to the website: [marcapaisuruguay.gub.uy]
Options: Reply To This Message•Quote This Message
Re: Montevideo, Uruguay Rolling Stones 2016 show and travel info
Posted by: Manofwealthandtaste ()
Date: March 2, 2016 18:39
Thanks, Chris - an interesting read!
Options: Reply To This Message•Quote This Message
Re: Montevideo, Uruguay Rolling Stones 2016 show and travel info
Posted by: Quique-stone ()
Date: March 6, 2016 02:27

+1! Thanks friend! Great memories from Montevideo!

Options: Reply To This Message•Quote This Message
Goto Page: Previous12345
Current Page: 5 of 5