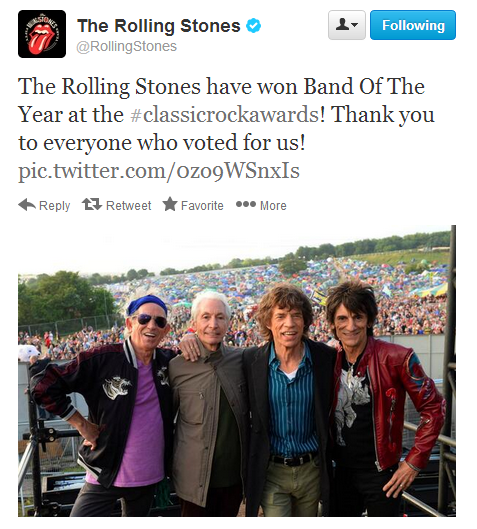 2131: WINNER: Band Of The Year, sponsored by Investec – The Rolling Stones

Fish knows what he’s talking about when he hails the Stones’ bravery in appearing at Glastonbury this year. They weren’t just facing a festival crowd, they were facing millions of TV viewers – but they delivered the good. A brief clip of their Hyde Park show earlier this summer underlines just how good they remain after all these years. It’s on sale now as a live DVD – have another blast here.

Mick Jagger via video: “We’re delighted. We did have a fantastic time in England, on our home turf. Glastonbury was brilliant and Hyde Park was a fantastic summer’s evening. See you all… somewhere soon…”

[www.classicrockmagazine.com]
Options: Reply To This Message•Quote This Message
Re: The Rolling Stones are the Band of the Year
Posted by: Rockman ()
Date: November 15, 2013 00:45
See you all… somewhere soon…”

ROCKMAN
Options: Reply To This Message•Quote This Message
Re: The Rolling Stones are the Band of the Year
Posted by: treaclefingers ()
Date: November 15, 2013 00:51

Was thinking the same thing. Think their readership likes the heavier side of things to be honest.
Options: Reply To This Message•Quote This Message