Some of you enjoyed Marianne Faithfull during her concerts this summer, like the one at Sheperd's Bush Empire, during the Stones concert series at Wembley in July. Now she is on to a new project, touring clubs in Europe with "An Evening In The Weimar Republic", singing the songs of Kurt Weill, featuring Paul Trueblood on the piano.

This is the set list from the Berlin concert: 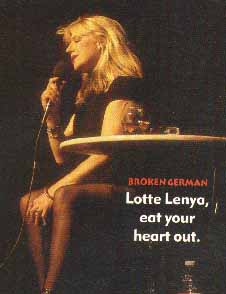