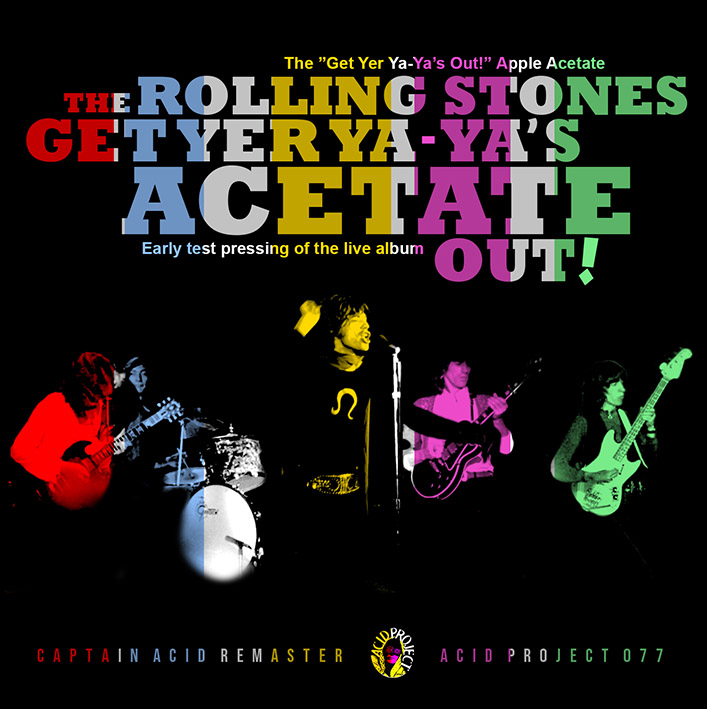 I used DAC-092 as a source for my remaster and added bonus tracks from original reels (taken from another disc).

I did what i usually do, enjoy

The Apple Acetate of Get Yer Yah Yah’s Out is an early test pressing of the live album.

An important piece of the "Rosetta Stone" necessary to further decipher the mysteries trapped within the grooves of Get Yer Ya-Ya's Out! has surfaced. It is none other than the infamous "Apple Acetate" otherwise known as the early test pressing of the Get Yer Ya-Ya's Out! album. Differences heard in the acetate unearth further clues about the evolution of this timeless recording.

The acetate has both guitars "up" in the mix. The rawness and brilliance of Richards rhythm playing is masked by a guitar mix that has both guitar players buried in pile of distorted mud on the "Get Yer Ya-Ya's Out!" album. You can clearly hear the guitars, and the incredible timing of Richards strumming of the guitar strings on the acetate.

I was very skeptical about the bonus tracks from the original reels claim especially since "Reels" is mis-spelled as "Reers" on the CD inlay. I did an A-B sound comparison using an original Decca LP as a reference. The sound on these CD tracks is incredibly clear and distinct. The best quality sound source for "side one" of "Get Yer Ya-Ya's Out!" in existence.

Options: Reply To This Message•Quote This Message
Re: Get Your Ya-Ya`s Acetate Out_Acid Project 077
Posted by: Quique-stone ()
Date: November 24, 2022 13:47
Thank you very much Captain!