Goto Thread: Previous•Next
Goto: Forum List•Message List•New Topic•Search•Log In•***Print View
POST: Mick Taylor 2001 Tour Of The Americas Vol 06 - 19 August 2001 - APPLE VALLEY
Posted by: StonyRoad ()
Date: December 25, 2021 20:32
MICK TAYLOR
2001 Tour of the Americas
2nd August - 2nd September 2001
This series is dedicated to Mick Taylor's shows in USA and Mexico.
A big thank you to all the people who recorded these shows and who shared them and to my two accomplices nzb and Jaap (Stonesmuziekfan) who gave me the benefit of their versions of these shows and their advice and support ... and therefore without whom this project would not have been possible.

This is a short set.
Nzb’s version was more complete than mine (which was missing the two last tracks) and lossless (mine was lossy) so it was a great improvement and therefore used here!
The sound is very good but centered on the drums which are very upfront!
I decided to amplify the sound (+6db) in the instrumental intro (before the drums start).
I reworked the transitions between the tracks that now start with the song. I deleted the last 3 minutes that were crowd noises and the then starting ambient music from the club. 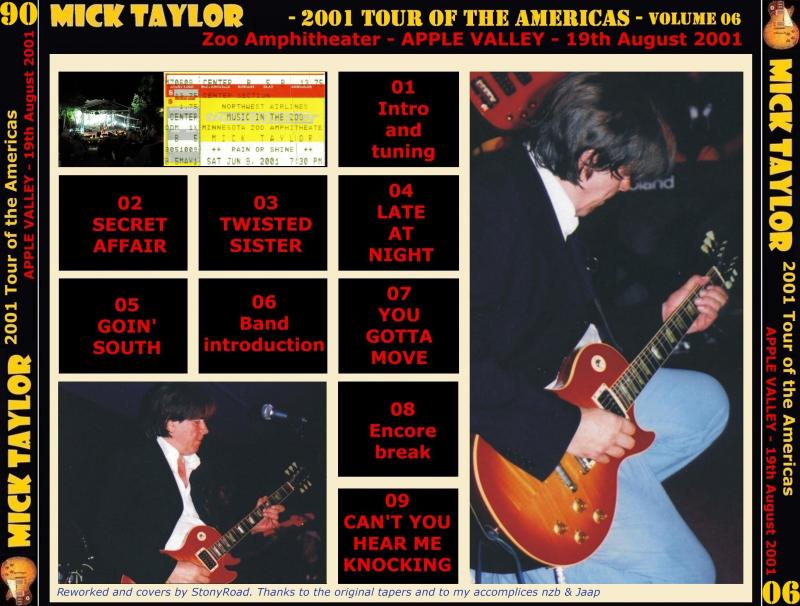