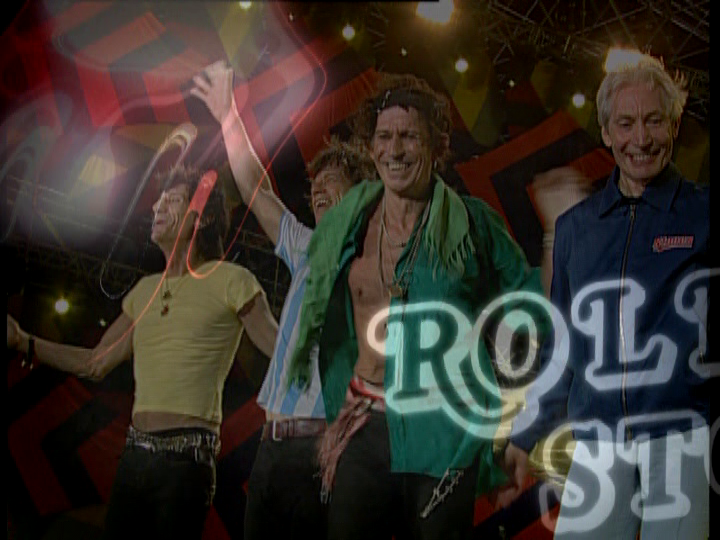 This is an unbroadcast TV version including "Shattered" and "Start Me Up", not included on the TV broadcast.

These are the "original DVD-Rs", untouched, just like I bought them, with the original menu. Not re-encoded or re-authored.

You can't select chapters while playback without returning to the main menu! That's why I didn't share it here before.

I labeled them "master original" like the seller told us, but "unbroadcast original" would've been better... since there is no master around. Viejorollinga, still a fool, Madafaka and I bought these DVD-Rs to the same guy.

Includes Shattered and Start Me Up, omitted in the TV broadcast.
Band Intro and the first 30 seconds of Midnight Rambler were not broadcast, and it's not even here in this "unbroadcast" version.
DVD-R photo and ticket included.
No artwork.

First of all... there is NO COMPLETE Pro-Shot.

So, when you read something like "The Complete Show for the first time ever", means that "Shattered" and "Start Me Up" are included. But, Band intro, and the first 30 seconds of Midnight Rambler are missing, and also the intro and outro of the show (they didn't consider important to broadcast I guess... lol).

And, when you read something like "From the Master Recording", actually, it's not, because if it where from the master recording, that would mean the complete show, without menu and chapters.

Hernan (still a fool) Re-encoded and Re-authored these DVD-Rs with new menus and shared them at Rocksoff.org (and maybe at DIME too). Madafaka also shared his version (but I don't know if they were the originals or another re-authored version).

Now, I'm sharing the original version for the first time ever here to the IORR community.

My re-encoded and re-authored version was shared here: [iorr.org]

060221A 21st February: Buenos Aires, Argentina, River Plate Stadium
(Jumping Jack Flash/It's Only Rock'n Roll/Shattered/Oh No, Not You Again/
Tumbling Dice/Worried About You/Rain Fall Down/Midnight Rambler/Night
Time/Band introduction/This Place Is Empty/Happy/Miss You/Rough Justice/
Start Me Up/Honky Tonk Women/Sympathy For The Devil/Paint It Black/
Brown Sugar/You Can't Always Get What You Want/Satisfaction)
Note: Broadcast live by Argentinian radio (Radio Spika). Telecast by Argentinian
TV (Canal Trece) on February 23 (omitting Shattered and Start Me Up).
Released in parts on the 4 DVD-boxset 'The Biggest Bang' in 2007 (see
070612A). [www.nzentgraf.de]

PS: The ticket on nzentgraf site... is my ticket from Feb 21, edited with the ticket from Feb 23... LOL!
Since my Feb 21 ticket was broken, I added the missing part from the Feb 23 ticket with Photoshop.
Take a look at CAMPO No. 23784, that number belongs to Feb 23. Feb 21 has CAMPO No. 231?
How did it end on Nico's site? Maybe because I included the edited ticket in "Shattered in Buenos Aires" when I shared on DIME. 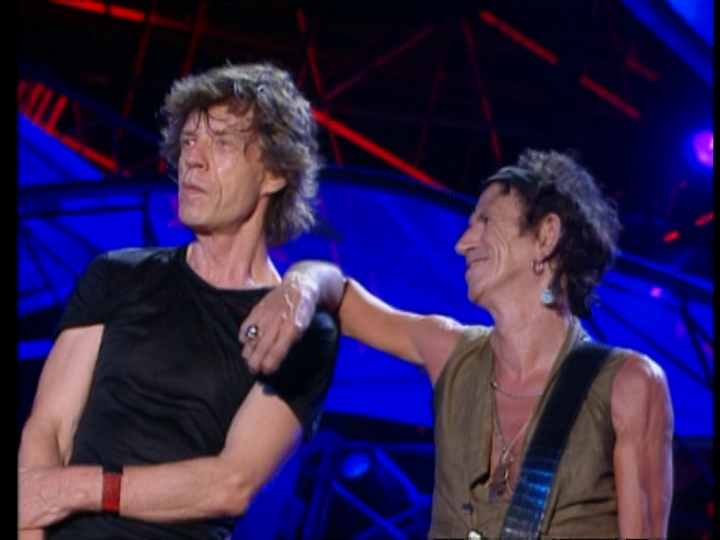 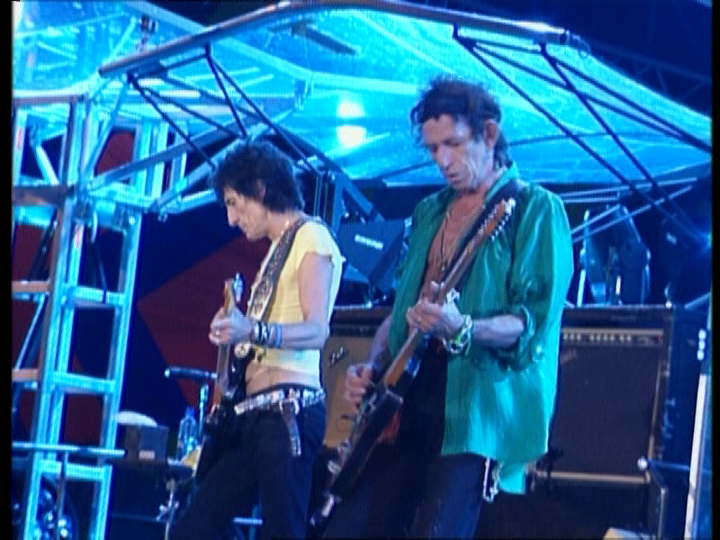 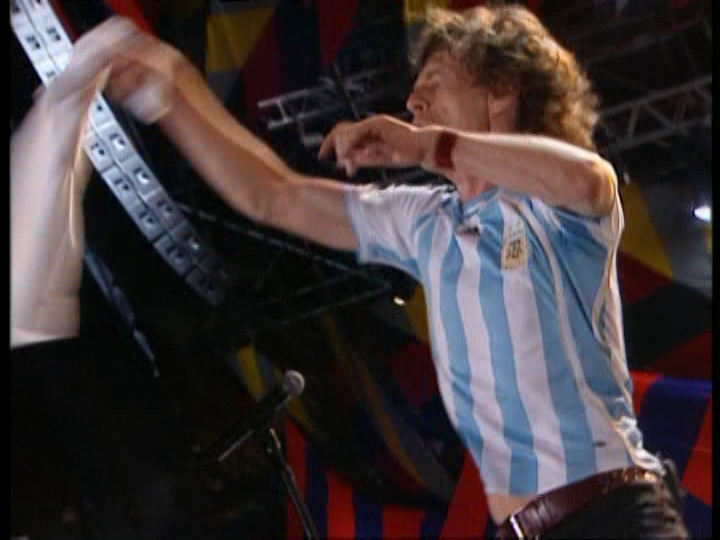 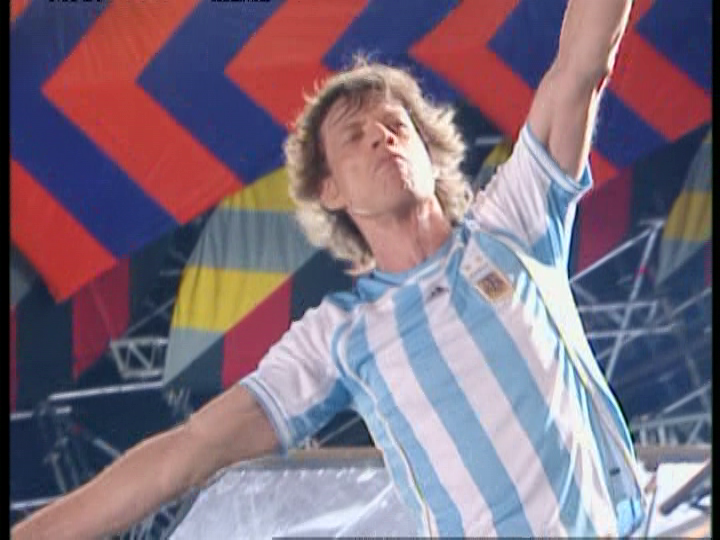 I labeled them "master original" like the seller told me, but "unbroadcast original" would've been better... since there is no master around.
Viejorollinga, still a fool, Madafaka and I bought these DVD-Rs to the same guy. 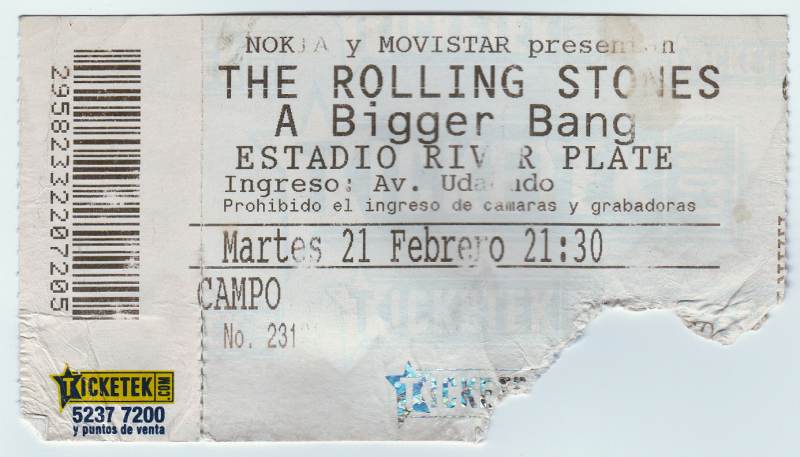