But it was a specific five who would cement Hawkins's reputation in music lore as an elder statesman. Rick Danko, Levon Helm, Garth Hudson, Richard Manuel and Robbie Robertson eventually left Hawkins en masse for the United States. They backed Bob Dylan and then made their own mark as the Band, with critically hailed albums and hits such as The Night They Drove Old Dixie Down, Up on Cripple Creek and The Weight.

Quote
Marmalade
And, allegedly, Mr Pierre Trudeau visited him there too, STG.

…and he and PET allegedly ‘partook’ Lady Marmalade!

ROCKMAN
Options: Reply To This Message•Quote This Message
Re: OT - RIP Ronnie Hawkins
Posted by: SomeTorontoGirl ()
Date: May 30, 2022 21:53 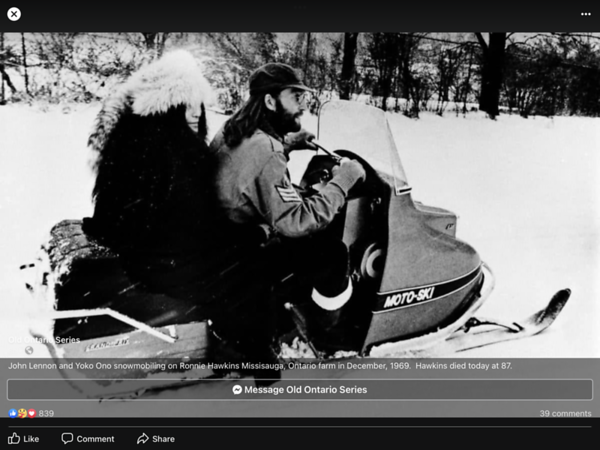 Canadian rocker Ronnie “The Hawk” Hawkins died over the weekend at age 87, from what a friend described as complications from old age.

Eighty-seven is an incredibly advanced age for someone who spent most of their adult life as a rock star. Hawkins once told the National Post that his high school friends “thought I was going to be dead by the time I was 21.” Tellingly, Hawkins was actually a few months older than a much less lucky rockabilly legend, Buddy Holly.

But it caps off a career that saw Hawkins rub elbows with some of the biggest acts in rock history. One lineup of his backing band would morph into The Band and Hawkins was sharing Tennesee stages with Jerry Lee Lewis and Carl Perkins before the word “rock and roll” even existed.

Lennon was in Canada with wife Yoko Ono on a bizarre mission to meet then-Prime Minister Pierre Trudeau, as part of what they assumed would be their new side gig as self-appointed diplomats for world peace (sort of a like a proto-Bono). It was to be the couple’s third visit to Canada that year. The first was to stage their famous bed-in at Montreal’s Queen Elizabeth Hotel, and then Lennon made a surprise summer appearance at Toronto’s Rock and Roll Revival festival.

The idea to stay at Hawkins’ modest home, in what was then an underdeveloped area of Mississauga, had come via Rolling Stone writer Ritchie Yorke. As one of the world’s most recognizable celebrities, Lennon caused chaos at any hotel he visited. Much simpler was for the Beatle to simply disappear into a guest room at a nondescript Canadian acreage.

Hawkins — who primarily made his living as a bar act — had sat out Beatlemania and knew Lennon mostly by reputation as the “biggest act in the world.”

He’d never really sat down with any of the Beatles’ multi-platinum records, but Hawkins had been a fellow act at the Rock and Roll Revival. He would eventually offer one of history’s more blunt assessments of Ono’s performance at the festival, which would become notorious for its extended atonal screeching. “As hip as everyone there tried to be, Yoko was too much,” Hawkins wrote in his 1989 autobiography.

Lennon, by contrast, was intimately familiar with Hawkins. “He knew all of my records. He knew most of them better than I did,” Hawkins would later tell music journalist Terry Ott.

Lennon and Ono were not good houseguests. Even before she arrived, Ono ordered sixteen new telephone lines run into Hawkins’ house and would run up a $9,000 ($69,000 in 2022 dollars) phone bill during her short stay at the property.

The couple overflowed a bathtub, causing one of Hawkins’ ceilings to collapse. Lennon unwittingly started a fire in Hawkins’ barn. And Ono reportedly inflected the entire visit with a note of tension by quietly resenting every moment that Lennon spent out of her sight.

This included Lennon’s frequent forays to go play in the deep snow on Hawkins’ snowmobile; a novel activity for the Liverpool native.

“He asked a few times if it was OK to go out and play in the snow and (Ono) didn’t say anything and she was kind of hot at him for a day or two,” Hawkins told Ott. The Canadian rocker would express bafflement for the rest of his life that Ono felt so comfortable telling “the number one man in the world … what to do.”

The couple also abandoned all their stuff upon their departure, and never really contacted Hawkins ever again.

But the mission was successful: Hawkins would accompany the couple to Ottawa where they were granted a brief audience with Trudeau. Lennon and Ono had dreams of making similar peace visits in Washington, Paris and London, but only the Canadian leader wound up returning their calls.

In a 2013 interview with CBC’s George Stroumboulopoulos, Hawkins would claim that one his main takeaways from the visit was that the prime minister had his “own stash” of marijuana. “And it was almost as good as John’s,” he said.

It happened sometime during the '80s in Toronto. Ronnie was at a car dealership looking over some cars. The manager and a couple of employees approached and asked him to leave! In fact, they threatened to call the police if he did not leave. Ol' Ronnie's appearance was obviously a little too 'grizzly' and 'homeless' for them. Well, Ronnie did leave. And came back a couple of hours later. He walked up to the manager and said he was buying the car he had been looking at. He slammed a suitcase on the counter and opened it. It was filled with cash!

It happened sometime during the '80s in Toronto. Ronnie was at a car dealership looking over some cars. The manager and a couple of employees approached and asked him to leave! In fact, they threatened to call the police if he did not leave. Ol' Ronnie's appearance was obviously a little too 'grizzly' and 'homeless' for them. Well, Ronnie did leave. And came back a couple of hours later. He walked up to the manager and said he was buying the car he had been looking at. He slammed a suitcase on the counter and opened it. It was filled with cash!

Cool story but I'd have preferred that he open the briefcase, show them the cash, then point to the dealership across the street to where he was now going to buy his new car.
Options: Reply To This Message•Quote This Message