Goto Thread: Previous•Next
Goto: Forum List•Message List•New Topic•Search•Log In•***Print View
Goto Page: 12345678Next
Current Page: 1 of 8
OT: Depp trial
Posted by: lem motlow ()
Date: April 22, 2022 11:50
Whole lotta rock and roll in this one.
Exhibit 1085 or whatever was a picture of a glass of whiskey, 4 lines of coke, a stash box and a cd clearly marked “ Keith Richards Robbed Blind”
Depp was asked if this picture was taken during the filming of a documentary.
He had to be reminded it was March 2013.
It was relevant because he was late for the filming that day( they were fighting), Depp said he didn’t need to be there, he had sent his crew to film “ Tom Waits,Keith Richards and a bunch of other great musicians “.

Some drug humor that had the court laughing, the opposition asked Depp if he kept cocaine in the wooden stash box-he replied “ in my experience a plastic bag would be better,with that box you’d be leaving a trail”
Asked if he had “ shared drugs with Marilyn Manson” he said “ I gave him a pill once….. to get him to stop talking”
This is only gonna get crazier.

Who knows. He's not helping himself. He sounds like trash. Actually both of them.
Options: Reply To This Message•Quote This Message
Re: Depp trial
Posted by: GasLightStreet ()
Date: April 24, 2022 06:46
I'll be surprised if she comes out on top with this one. The one in the UK was complete bullshit. The lies she's told, with video footage to deflate them, will not be enough but they should be.

Maybe not needed? Yes, there has been much press on them over the years... 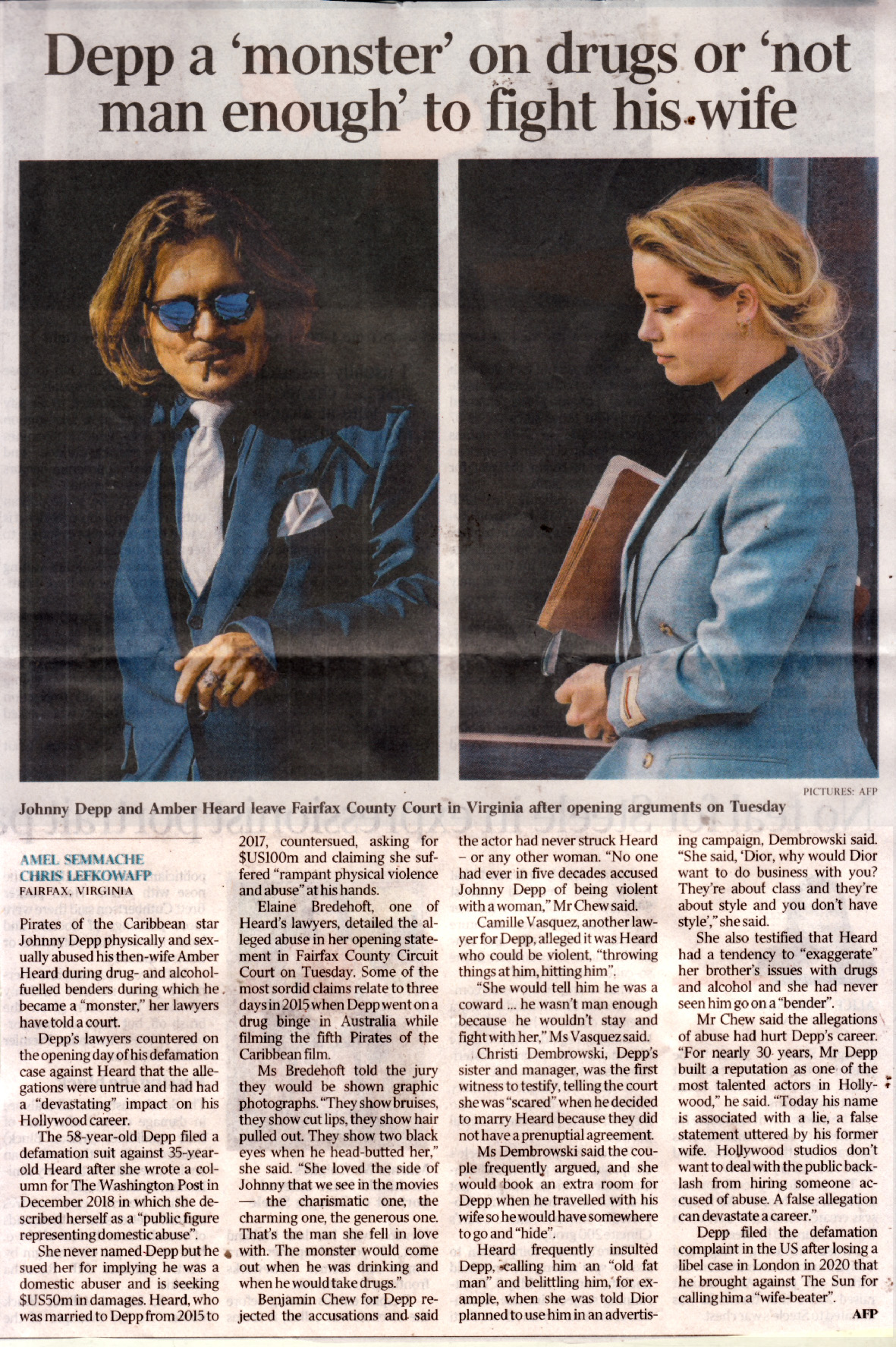 ROCKMAN
Options: Reply To This Message•Quote This Message
Re: Depp trial
Posted by: Hairball ()
Date: April 24, 2022 22:52
Most legal experts I've seen on the news are saying Depp continues to bury himself into a deeper hole rather than clearing his name - using descriptions such as a trainwreck,
out of touch, bizarre, violent, addict, crazy, etc. One even compared Depp's creepiness to Phil Spector, while another mentioned OJ Simpson...

"... entering into the libel courts, whether in the US or in the UK, where Depp already lost an action against the Sun newspaper in 2020
for calling him a “wife-beater”, is a high-stakes move. Depp has argued that Heard was the one who became violent in the relationship.


I'd say both are way out of touch with reality (he maybe a bit more than she), and neither should win anything which could probably be the most likely outcome - both losers.

Wow man then he woulda really copped it .....

I'd say if he took the high road and just lived a good life, people would believe him in the long run.

Now he's just mixing it up in the muck. It's a no-win situation.

Stop digging the hole your in Johnny!
Options: Reply To This Message•Quote This Message
Re: Depp trial
Posted by: Rockman ()
Date: April 25, 2022 09:40 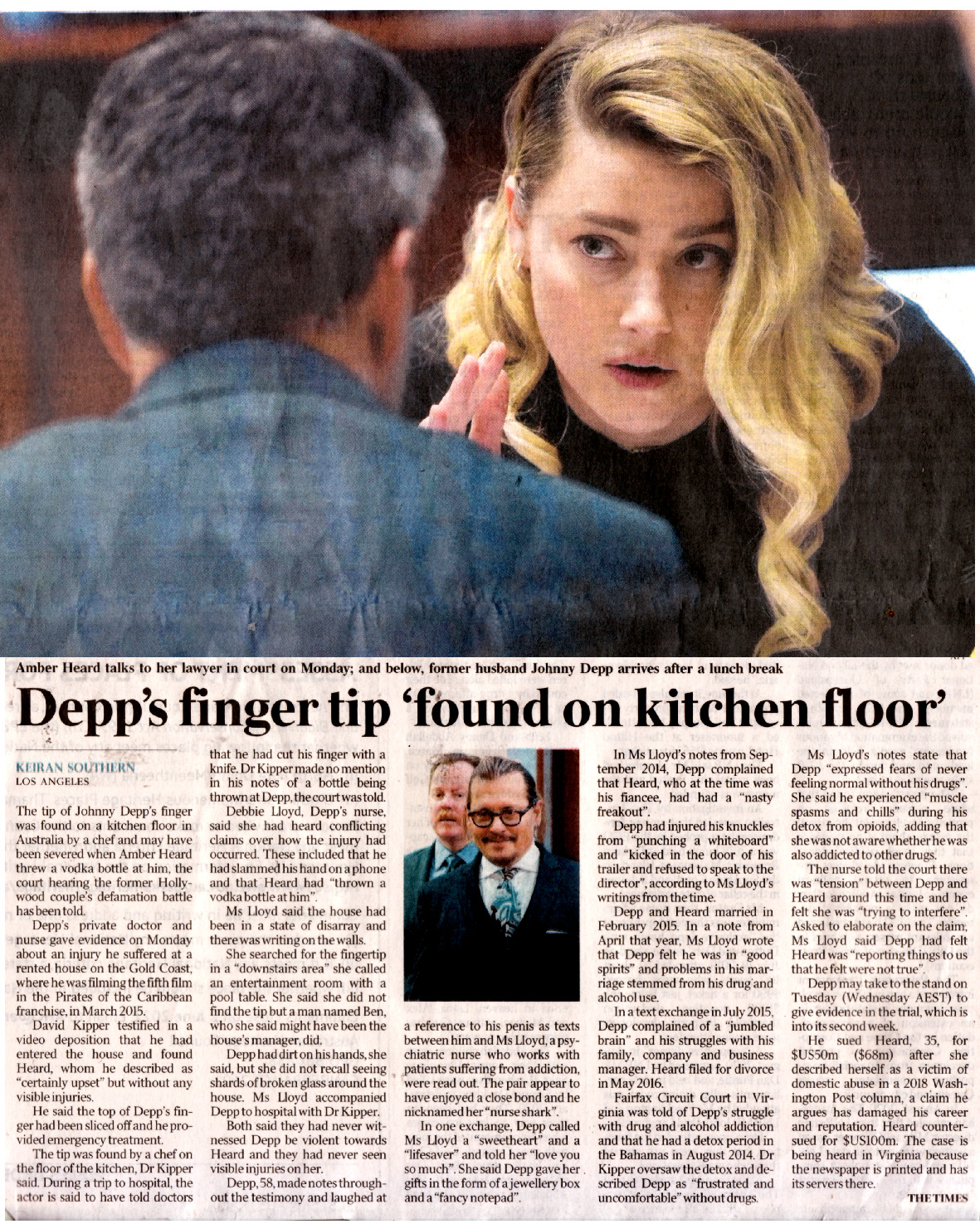