In fact she was a good girl made to look 'baad' by her management. Inside she was a wonderfully funny, self-deprecating, kind and totally natural New York girl with a heart as big as the Empire State Building.

Rest in Peace Ronnie, and thank you for 59 years of pleasure and great music.
Options: Reply To This Message•Quote This Message
Re: OT- RIP Ronnie Spector
Posted by: Per-Arne ()
Date: January 14, 2022 13:20
Her album from 2006: "The last of the Rock Stars"
Never gonna be your baby - Background vocal: Lisa Fisher
All I want - Guitar: Keith Richards
Work out fine - Guitar and male vocal: Keith Richards 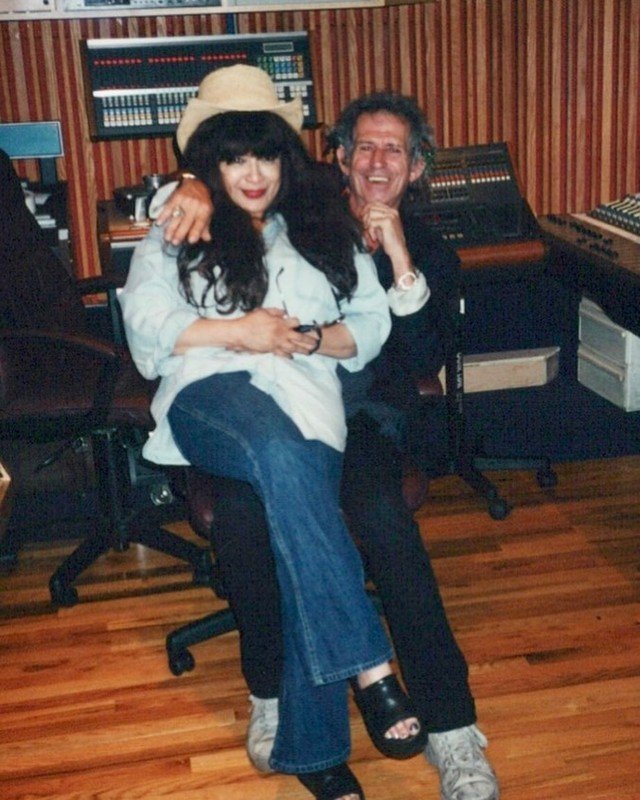 Yes All I want is wonderful, disagree that Keiths "destroys" it with a 20 second solo. If anything at nearly 5:00 it's a little too stretched out. Keith adds nice fills throughout. Work Out Fine is a hoot...if it wasn't for Keith I would have never cared to be honest
Options: Reply To This Message•Quote This Message
Re: OT- RIP Ronnie Spector
Posted by: johnnythunders ()
Date: January 14, 2022 23:01

Yes All I want is wonderful, disagree that Keiths "destroys" it with a 20 second solo. If anything at nearly 5:00 it's a little too stretched out. Keith adds nice fills throughout. Work Out Fine is a hoot...if it wasn't for Keith I would have never cared to be honest

Better remember her this way

Yes All I want is wonderful, disagree that Keiths "destroys" it with a 20 second solo. If anything at nearly 5:00 it's a little too stretched out. Keith adds nice fills throughout. Work Out Fine is a hoot...if it wasn't for Keith I would have never cared to be honest

Better remember her this way

Options: Reply To This Message•Quote This Message
Re: OT- RIP Ronnie Spector
Posted by: ryanpow ()
Date: January 15, 2022 03:31
I started the day today by listening to "Tonight You're Mine, Baby" in her honor. It made me feel inspired all day. RIP Ronnie.

Ronnie Spector, lead singer of beloved ’60s girl group the Ronettes, has died from cancer, her family announced Wednesday. She was 78.

On her website, the family’s statement reads, “Our beloved earth angel, Ronnie, peacefully left this world today after a brief battle with cancer. She was with family and in the arms of her husband, Jonathan [Greenfield]. Ronnie lived her life with a twinkle in her eye, a spunky attitude, a wicked sense of humor and a smile on her face. She was filled with love and gratitude. Her joyful sound, playful nature and magical presence will live on in all who knew, heard or saw her.”

Born Veronica Bennett in 1943 in Harlem, Ronnie rose to fame as the lead vocalist of the Ronettes, a group she formed with her sister Estelle Bennett and their cousin Nedre Talley. Their song “Be My Baby” was their biggest hit, and they joined the Beatles on their U.S. tour in 1966.

From 1968 until 1974, she was married to Phil Spector, who produced many of the band’s records and died almost exactly a year ago. In her memoir, Be My Baby, she detailed his refusal to let her out of their home, among other allegations of emotional abuse. Spector was convicted of murder in 2009 and died while serving his sentence, but as Ronnie wrote on Instagram after his death, “I still smile whenever I hear the music we made together, and always will. The music will be forever.”

In 1982 she married manager Jonathan Greenfield, and her group was inducted into the Rock & Roll Hall of Fame in 2007.

Her family wrote that she requested donations to local women’s shelters or the American Indian College Fund in lieu of flowers, noting that a celebration of life would be forthcoming.

Options: Reply To This Message•Quote This Message
Re: OT- RIP Ronnie Spector
Posted by: Cristiano Radtke ()
Date: March 21, 2022 20:44
Ronnie's "Be my Baby - a memoir" is being released on May 3 in a new updated edition with a new foreword by Keith Richards. 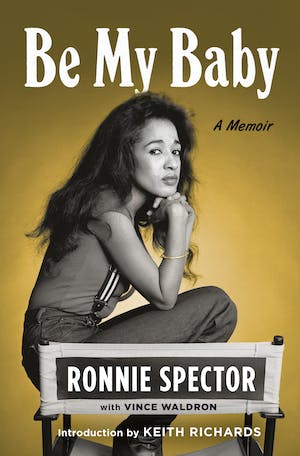 I met Ronnie Bennett—that was her name then, she was still a few records away from becoming Ronnie Spector—in January 1964. AD, in case you’re wondering. To set the scene, I’ll take you backstage at a dark, dank little theater. It was the Rolling Stones’ second tour. In England this was, and suddenly we find ourselves on the road with the Ronettes, who were enormous at the time. Every record they made was a number one. Or if it wasn’t, it should have been. They knew how to make records. I’d never set eyes on Ronnie before that day. I knew of her the same as everybody else, by the radio. Before we ever actually met each other, Ronnie and me, the sound was happening between us.

Being on the road, I’d just climbed out of my little cubicle and found my way backstage in this little theater, I think it was the Granada Mansfield in the East Midlands, near Nottingham, where the last band to duck and dive into the local pub might have been Robin Hood and his Merry Men. The theater got torn down about ten years later. It’s a discount dress store now. But that’s not the end of my fable.

Back to the Granada theater. 1964. I’m walking down the backstage corridor. It’s green. It’s still dark. It’s still dank. It still smells. And I get to a stairwell where I hear these voices. Heavenly. Three angels singing. For a minute I wonder if maybe they really are angels. “Is this it? Am I done already? Well, it was a nice send-off, anyway.”

I continue walking down this stairwell. I hear Nedra and Estelle singing this mesmerizing chant. That’s the sound. The Ronettes. Rehearsing. And then I hear the pure, pure voice of Ronnie singing “Be my little baby…” Draws me right into the theater. I recognize the voice immediately. Can’t be imitated. Except maybe by Frankie Lymon, who Ronnie loved. I find a seat in the empty auditorium. I’m just going to watch. And listen. Ronnie sees me straightaway. Of course. And fixes me in a gaze. Suddenly, I’ve got a command performance by the hottest girl group in the world. All to myself. Talk about shock and awe.

Hearing them singing, just the three girls, a capella, even without those gorgeous arrangements by Jack Nitzsche. Without the Wrecking Crew pounding away behind them. Without any of it, Ronnie and the Ronettes, on their own, built a Wall of Sound. Right there in an empty theater. They didn’t need any help at all.

Of course it was love at first sight. Isn’t it always? It is so long ago it’s hard to recapture it. All I can say is Ronnie and I started to get along really well from the very first day. We had almost nothing in common, a guitar player from Dartford and this extraordinary girl from Spanish Harlem. But we had music. You know? We wouldn’t’ve met but for music. And I wouldn’t be writing these words now, except for the music. I mean that’s the wonderful magnet, isn’t it?

So we met in England. And then a few months later, the Stones found ourselves in America, let loose in New York City. And, of course, the Ronettes show up the first morning in this enormous red Cadillac convertible. “C’mon,” Ronnie called. “We’re taking you to Jones Beach!”

We pack into the convertible, Ronnie, Nedra, and Estelle—the whole Ronettes—and as many Rolling Stones as could fit into this endless red car. And off we go. It was quite a day. I mean, we just arrived in New York City for the first time ever. I look over at Mick, who’s got his arm around Estelle, and I say, “Oh, this is the way to go, man!” The Ronettes drove us all around New York City and we ended up in Jones Beach. And later on, I ended up at Ronnie’s place. Amazed. We had fun like that.

Do I have to tell you that Ronnie’s got one of the greatest female rock and roll voices of all time? She stands alone. Absolutely. She’s worked with a lot of producers and arrangers, some of them quite good. But, if you listen to her vocals, you can always tell who’s in control. You know that every song she sings is gonna go her way, and no one else’s. Ronnie’s a very strong girl. After all, for a long time she was prevented from singing anything. So it’s not surprising to me that she’s still working. She can still sing, man. I have tapes that she recorded down here at my house. That was 2001.

I have a little studio in my basement, and I had some time off in 2000, 2001. So I’d invite whoever was around to drop by and make music. Ronnie’s my neighbor—she lives about four towns down the road from me in Connecticut—so she came by several times. We recorded a duet of the old Ike & Tina Turner song “It’s Gonna Work Out Fine.” We were working on a song called “Love Affair” the day before 9/11 happened. After that, everything just scattered into the winds. We had a really good thing going and then the bomb dropped. But I’ve got a couple of tracks that I still want to work on, and that’s one of them. Ronnie, I just love her around. And I’d like her to hang in for as long as possible. Like me.

The last time I saw Ronnie—and heard Ronnie—was at my dentist’s office. 2020, just before the pandemic. This is in New York City. And I’m in the chair, the dentist is working on my teeth, my mouth wide open. And suddenly from out in the corridor, I hear singing. A beautiful pure, pure voice that I recognize immediately. She’s singing, “Be my little baby…” And I think, It cannot be true! And then into this little exam room walks Ronnie. She was having her teeth done the same day, and when she heard I was there, she decides to surprise me with a serenade.

With my mouth still propped open, I just wave at Ronnie, sort of vaguely. I couldn’t speak, but that didn’t matter. It was enough to know that between the two of us, Ronnie and me, the sound is still happening.

Thanks for posting.
Options: Reply To This Message•Quote This Message
Re: OT- RIP Ronnie Spector
Posted by: crawdaddy ()
Date: March 21, 2022 22:26
Thanks so much for posting Cristiano

Only recently saw a one hour TV programme here in UK about Ronnie at the BBC, and it was excellent, and she was such a great talent.