Quote
Gfmsoccer
We’re doing casinos now? Here’s my theory on this bizarre tacked on show. First it’s not about the fans. This is an event show. They are filming a movie of doing a live pay per view. It may be an album theme show, like Tattoo You. It may be a chance to do a bunch of deep cuts that Mick doesn’t like to do in stadiums. Most likely it’s a way to give their families & crew a vacation In Miami at the end of the tour.

More likely added to make up for the lower than expected ticket sales for the stadium part of the tour so everyone can make their money. I would expect a similar show to the rest of the tour.

Respectfully, your sky is falling tix aren’t selling predictions have missed the mark every time.

These shows are filling up very nicely contrary to unpopular opinions

Respectfully, your sky is falling tix aren’t selling predictions have missed the mark every time.

These shows are filling up very nicely contrary to unpopular opinions

Yep, spoke to 2 different people who were offered 5$ tix thru work, including a 911 operator.

Quote
StonedRambler
The ticket strategy today is not to sell out venues anymore. A sold out stadium means the ticket prices were too cheap. That has been confirmed by promoters in several interviews over the last couple of years.

I am well aware of this. I think the whole reason for the added show is let's say the financials say they are coming within 90% of target. Everybody agrees to do the extra show, in a smaller place so you don't have the same stadium overhead, the Stones get paid what they expected for the tour and the promoter doesn't take a loss.

DVD/Special setlist etc - could or could not happen, I say it's pretty close to the same stadium setlist, not going to be anything like the Beacon, Roseland etc. If it's a DVD or theatrical release you are getting hosed on pit tickets because those are going to the paid extras.

(I am sure pre-pandemic they were expecting more than 75% for St Louis for example, or most of the premium seats for MPLS remaining unsold)

I can beat that

Nate
Options: Reply To This Message•Quote This Message
Re: New Show announced - Hard Rock Live Hollywood FL, November 23
Posted by: mariano ()
Date: October 16, 2021 19:56
Anybody knows if there is a presale for this one.

Quote
mariano
Anybody knows if there is a presale for this one.

Thank you in advance


I know neither was private but I also don't recall either being available to everybody on Ticketmaster or is that incorrect?

It's gonna be a professional DVD like Hyde Park or Glastonbury, which are both great to watch. 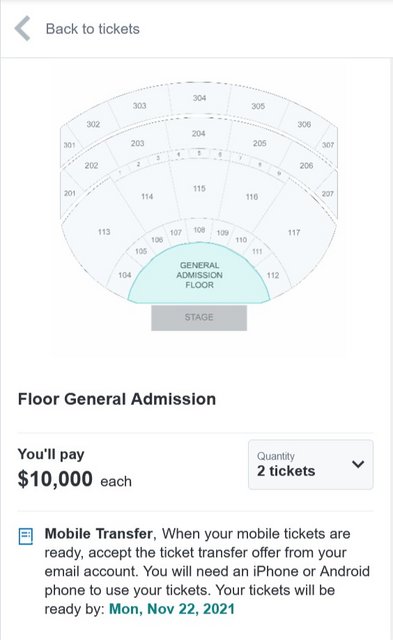 
I know neither was private but I also don't recall either being available to everybody on Ticketmaster or is that incorrect?

No, they were not on TM.
Options: Reply To This Message•Quote This Message
Re: New Show announced - Hard Rock Live Hollywood FL, November 23
Posted by: MisterDDDD ()
Date: October 17, 2021 00:29

Quote
DREAMTIME
For those members who keep hoping for MSG, it closed years ago when it was renovated for the rich! Period. Everything that made it magical is GONE! This is why The Stones played the NEW Barclay Center. Now, if they do NYC again, in an Arena, It will be OUR NEWEST UBS ARENA on the Queens/Long Island border. If they do play there, it will also go down as the closest concert to Long Island they ever performed. (Closer than Shea Stadium).

Same great midtown location though.
So not “everything” that made it magical is gone

I can beat that

Quote
rubyeveryday
Feel free to post any insights/strategies to getting one of the "cheap" seats. Thanks.