Goto Thread: Previous•Next
Goto: Forum List•Message List•New Topic•Search•Log In•***Print View
Goto Page: 1234Next
Current Page: 1 of 4
Reasons the Stones have lasted so long…
Posted by: cineplexed2 ()
Date: September 27, 2021 22:28
Last night’s show really put a spotlight on many things I feel have allowed the band to hold it together this long and still be such a powerful force of nature. Feel free to add and expand:

2) Keith the fierce lifer, Charlie the modest circumspect one, and Ronnie the good-time-go-along guy made a good mix of personality to keep it going. (Probably a good thing Taylor quit, as a great as he was as a player, simply because Keith didn't really like him that much.)

Also Mick and Keith don't mind the touring lifestyle. Some artistis hate touring even if they would like to perform but Mick and Keith also like to be on the road. That's not any bigger problem for them. Instead, they seem to enjoy it.

Some kind of musical and spiritual connection between Mick and Keith. There has been tougher periods but still there is something special between them. And even if they diagree on something they don't break up the band for that. They are very persistent.

And all the other band members have been so great. Mick Taylor maybe wasn't feeling himself very comfortable within the band all the time (even though he was an absolute brilliant solo player) but Ronnie Wood has been just great in bonding the members together. And Charlie of course also.

Quote
Nikkei
They happened at the right time. The cultural arc of western societies somehow aligns with their career.

Quote
cineplexed2
Last night’s show really put a spotlight on many things I feel have allowed the band to hold it together this long and still be such a powerful force of nature. Feel free to add and expand:

I would add a ninth reason , if not the main reason,

I would like to agree with your list but just watch LSTNT (the movie). The light sign showing alternatively 'Mick Jagger' / 'The Rolling Stones'. If Mick's solo adventure in the 80's would have succeeded and make him great without the Stones, it would have been the end. 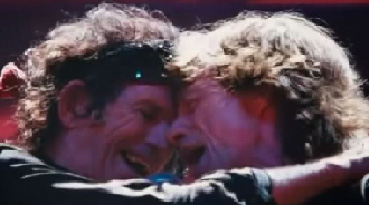 Exactly! Starting in 89 when Michael Cohl started promoting their tours, which really pissed Bill Graham off, they have made huge dollars on ticket sales and merchandising. A number of the top 10 tours of all time are the Stones. Even today with different promoters, they only do a dozen or so shows and yet this tour will rank up there in the top for 2021.
So many of the "classic" rock bands have to tour these past several years because there are no album sales anymore. I've seen more concerts the past several years than I have since I was in highschool back in the 80s!
Options: Reply To This Message•Quote This Message
Re: Reasons the Stones have lasted so long…
Posted by: Bliss ()
Date: September 28, 2021 10:22
The most fundamental reason, which defeated a lot of other performers, is that they were able to keep going physically. They haven't succumbed to illness, injury or disability.

Secondly, motivation - they have been able to remain a cohesive enterprise unlike, say, the Beatles, who preferred to pursue solo projects rather than overcome their differences.

I think if other seminal bands of the 60s could meet these two criteria, they too could keep going into old age.

HOWEVER...another reason is that their music is Blues-based. Blues is a timeless genre, immune to changing trends. Had the Stones' music been based on, say, Disco, no matter how strong they were individually and collectively, it would be a hard sell apart from a core fanbase.
Options: Reply To This Message•Quote This Message
Re: Reasons the Stones have lasted so long…
Posted by: slewan ()
Date: September 28, 2021 11:20
1. giving mass audiences exactly what they want: greatest hits and pure entertainment (and not much else beside)
2. sacrificing any artistic aspiration for commercial success (see above)
3. becoming part of the establishment instead of rebelling against it
4. surviving the 70s and the 80s = being able to resume touring at the end of the 80s (and onwards) when Rock music became a gigantic business (because the babyboomer generation which was and still is their major fan base have become wealthy enough to afford overpriced tickets).
5. being able to survive their creative death for some 40 years…
6. as someone mentioned above: Jagger's failure as a solo artist which forced him to realize that the price of being successful is keeping the Stone together.

I'm a fan but these are the brute facts

Luck = finding Charlie in 62 pairing him with BW and creating the best rythmn section of rock', roll.
Luck = hiring MT after BJ was sacked.
Luck = having MT quit in 74. RW entered the picture and gave a new life to the band.
Luck = Keith getting arrested in Toronto in 77 which led him to quit heroin (Keith would have certainly died from his addiction hadn't he "met" the Mounties)
Options: Reply To This Message•Quote This Message
Re: Reasons the Stones have lasted so long…
Posted by: DandelionPowderman ()
Date: September 28, 2021 12:00
«Met the Mounties»

Options: Reply To This Message•Quote This Message
Re: Reasons the Stones have lasted so long…
Posted by: RaahenTiikeri ()
Date: September 28, 2021 13:33
In physichal way...
They found some magical alchemy with lifestyle&drugs...
Some kind of Peter pan thing..
And they use that alchemy running their music love&passion...