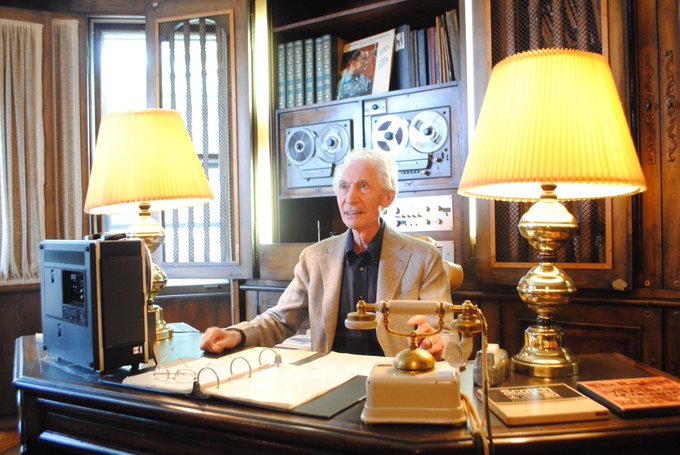 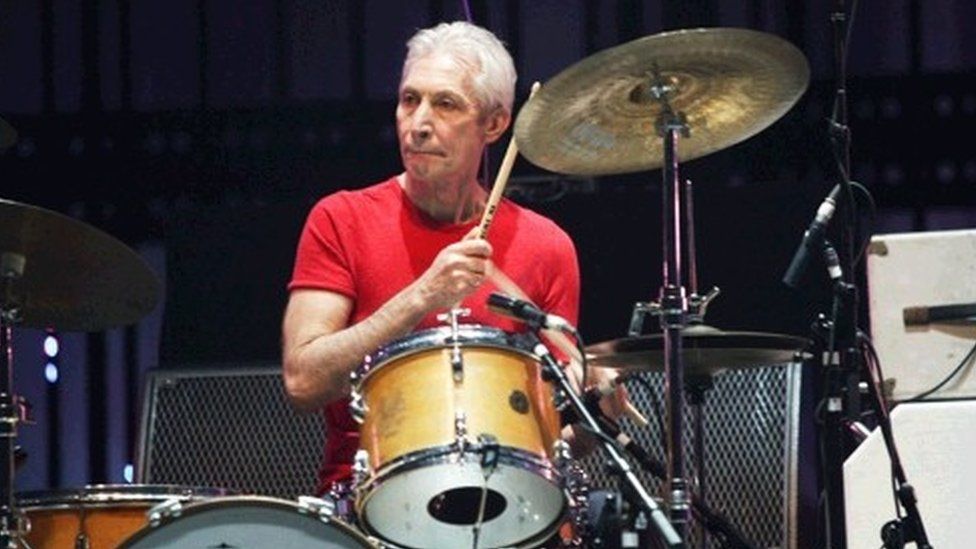 Drummer Charlie Watts, who has died at 80, provided the foundation which underpinned the music of the Rolling Stones.

The band became a by-word for rock and roll excess but for Watts, playing with the Stones did not become the ego trip that drove Mick Jagger and Keith Richards.
A jazz aficionado, Watts vied with Bill Wyman for the title of least charismatic member of the band; he eschewed the limelight and rarely gave interviews
And he famously described life with the Stones as five years of playing, 20 years of hanging around.

Charles Robert Watts was born on 2 June 1941 at the University College Hospital in London and raised in Kingsbury, now part of the London Borough of Brent.
He came from a working-class background. His father was a lorry driver and Watts was brought up in a pre-fabricated house to which the family had moved after German bombs destroyed hundreds of houses in the area.

A childhood friend once described how Watts had an early interest in jazz and recalled listening to 78s in Charlie's bedroom by artists such as Jelly Roll Morton and Charlie Parker. 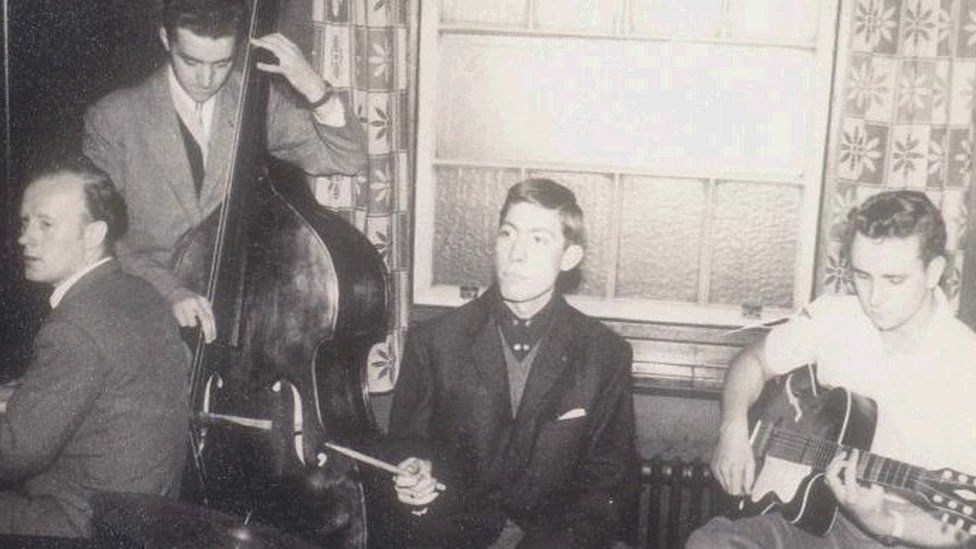 At school he developed an interest in and a talent for art and he went on to study at Harrow Art School before finding a job as a graphic designer with a local advertising agency.

But his love of music continued to be the dominating force in his life. His parents bought him a drum kit when he was 13 and he played along to his collection of jazz records.

He began drumming in local clubs and pubs and, in 1961 was heard by Alexis Korner who offered him a job in his band, Blues Incorporated, an outfit that became a vital part of the development of British rock music.
Also playing with Blues Incorporated was a guitarist named Brian Jones who introduced Watts to the fledgling Rolling Stones whose original drummer, Tony Chapman, had quit the band.

'Mick Jagger's bum'
The result of that meeting according to Watts was "four decades of seeing Mick's bum running around in front of me."
Watt's skill and experience was invaluable. Together with Bill Wyman he provided a counterpoint to the guitars of Richards and Jones and the preening performance of Mick Jagger.

Early Stone's concerts often descended into mayhem as eager female fans climbed onto the stage to embrace their heroes. Watts often found himself trying to maintain a beat with a couple of girls hanging on to his arms. 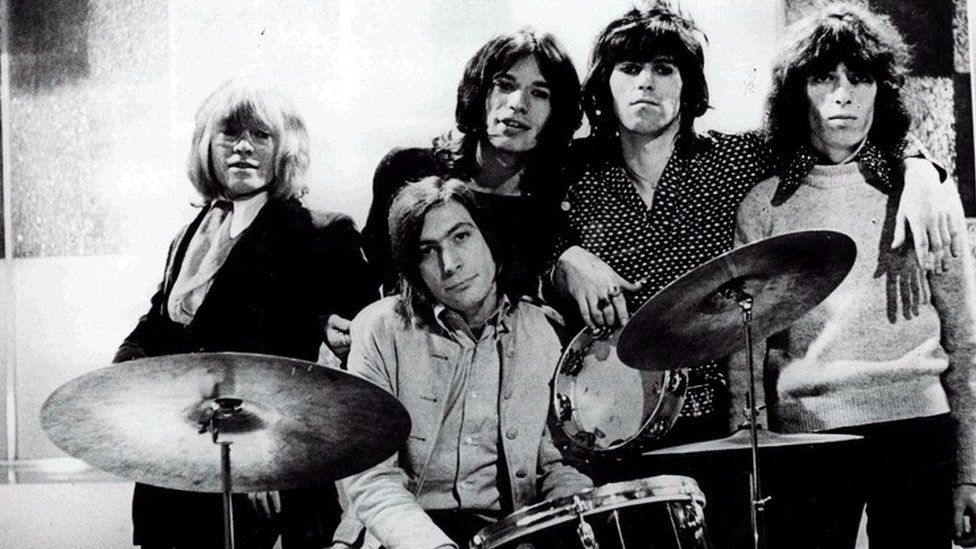 As well as his musical ability, his graphic design experience also proved useful. He came up with the sleeve for the 1967 album, Behind the Buttons, and helped create the stage sets which became an increasingly important feature of the band's tours.

Watts also came up with the idea of promoting their 1975 tour of the US by having the band play Brown Sugar on the back of a lorry as it drove down the street in Manhattan.
He had remembered New Orleans jazz bands using the same technique and it was later copied by other groups including AC/DC and U2.

His lifestyle while on the road was in direct contrast to that of other band members. He famously rejected the charms of the hordes of groupies that dogged the band on all their tours, remaining faithful to his wife Shirley, who he had married in 1964.

All-time low
However in the mid-1980s, during what he put down to a mid-life crisis, Watts went off the rails with drink and drugs, leading to heroin addiction.
"It got so bad," he later quipped, " that even Keith Richards, bless him, told me to get it together."

At the same time his wife was battling her own alcoholism. and his daughter, Seraphina, had became something of a "wild child" and was expelled from the prestigious Millfield public school for smoking cannabis. 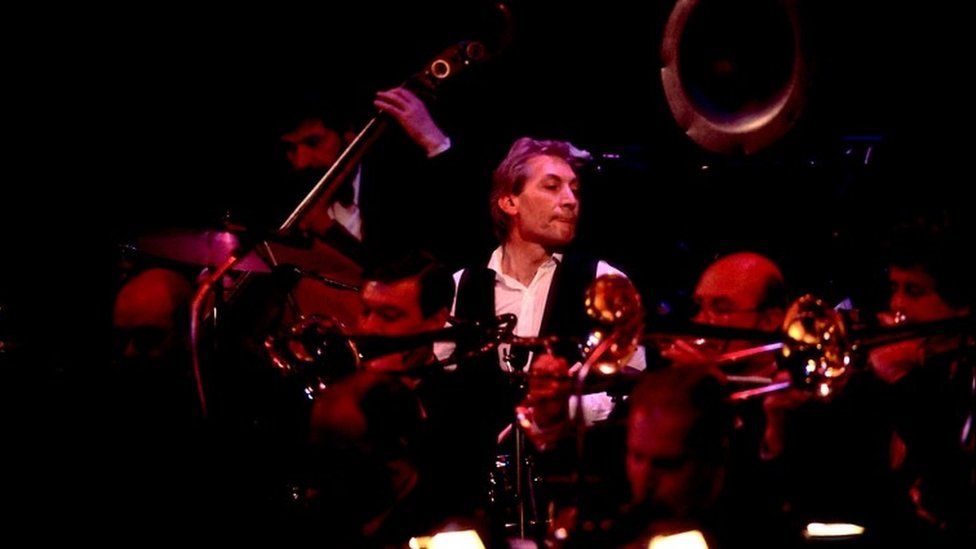 Watts's relations with Mick Jagger, too, had reached an all-time low.
On one famous occasion, in an Amsterdam hotel in 1984, a drunken Mick Jagger reportedly woke Watts up by bellowing down the phone "Where's my drummer?"
Watts responded by going round to the singer's room, hitting him with a left hook, saying "Don't ever call me 'your drummer' again, you're my f***ing singer."
The crisis lasted two years and it was Shirley, above all, who helped him get through it.

Estimated to have been worth £80 million, as a result of the enduring popularity of the Stones, Charlie Watts lived with his wife on a farm in Devon where they bred Arabian horses.

He also became something of an expert on antique silver and collected everything from American Civil War memorabilia to old classic cars. The last was curious since he didn't drive.

Between his regular Stones tours, Charlie Watts indulged his love of jazz. Though he always enjoyed drumming with a rock band and loved his work with the Stones, jazz gave him, as he put it, "more freedom to move around".

Back in art college, he'd completed an illustrated biography of jazz saxophonist Charlie Parker, entitled Ode To A High Flying Bird.
In 1990, he used the book as the basis for a musical tribute to the man they called the Bird on an album by the Charlie Watts Quintet. It featured several of his jazz musician friends, including saxophonist Pete King.

Watts played and recorded with various incarnations of big bands. At one gig, at Ronnie Scott's, he had a 25-piece on stage including three drummers.
Always well turned out - he had featured in several lists of best dressed men - Watts kept his feet firmly on the ground throughout his career with one of the world's most enduring bands.

"It's supposed to be sex and drugs and rock and roll," he once said. "I'm not really like that. I've never really seen the Rolling Stones as anything."
[www.bbc.com]
Options: Reply To This Message•Quote This Message
Re: Charlie Watts Dies at 80
Posted by: NilsHolgersson ()
Date: August 24, 2021 21:21
Rest in peace Charlie.. 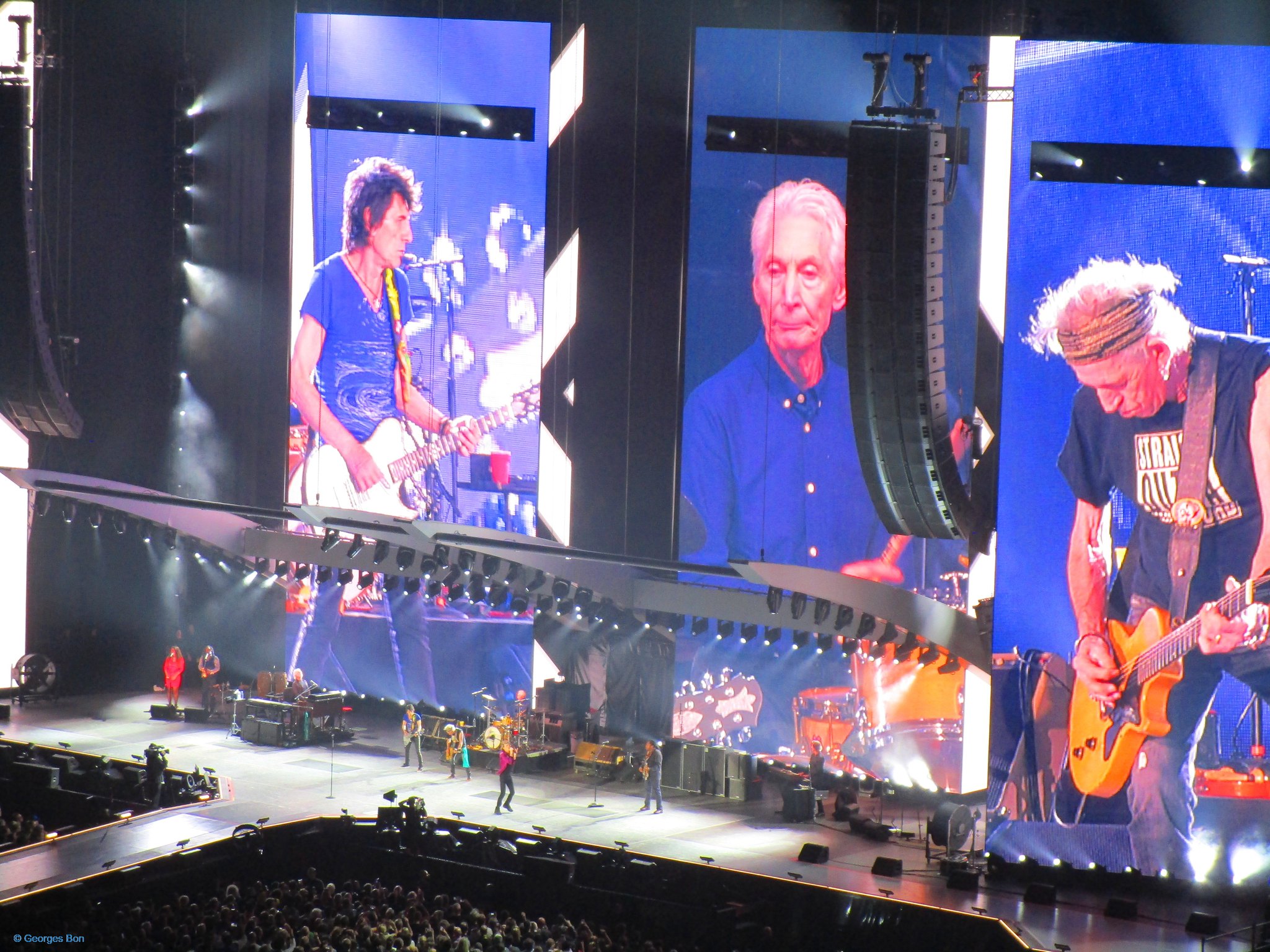 Options: Reply To This Message•Quote This Message
Re: Rolling Stones drummer Charlie Watts has died at the age of 80 in hospital surrounded by his family
Posted by: KindaBlue ()
Date: August 24, 2021 20:26
Rest in Peace, Charlie.

Thank you for all the happy memories.

Sympathies to his family and friends.
Options: Reply To This Message•Quote This Message
Re: Rolling Stones drummer Charlie Watts has died at the age of 80 in hospital surrounded by his family
Posted by: Georges ()
Date: August 24, 2021 20:32 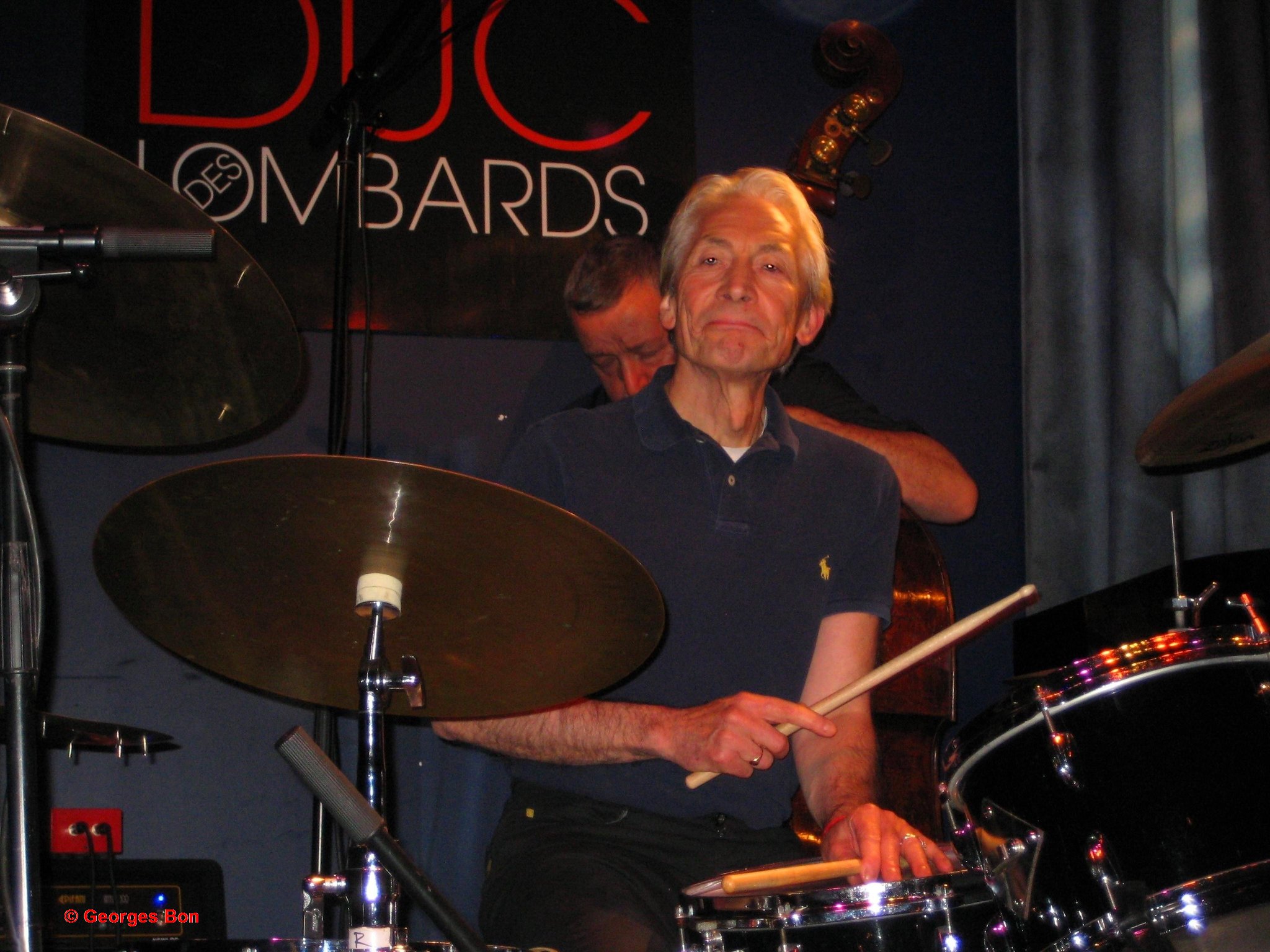 Options: Reply To This Message•Quote This Message
Re: Charlie Watts Dies at 80
Posted by: crumbling_mice ()
Date: August 24, 2021 21:30
Deeply saddened at this news. But 80 is a fine old age, and Charlie has done more than the majority of people will ever do and lived his best life.

Really feel for the rest of the band and of course his family. He was one of rock's great characters and it will be a strange world without Charlie Watts being out there somewhere.

Thank you very very much for all the joy you gave me with your playing. One of a kind.

All the love and strength to the family right now

All the love and strenght to Mick, Keith and Ron and the all Stones family.

God bless you Charlie
Options: Reply To This Message•Quote This Message
Re: Charlie Watts Dies at 80
Posted by: bye bye johnny ()
Date: August 24, 2021 21:33
From Max Weinberg:

A monumentally sad day learning my personal hero Charlie Watts has died. I’m devastated and my soul aches for Shirley, Serafina, the extended Watts family, and of course his band mates. I don’t know what to say really. Charlie Watts Rest In Peace my friend…

[twitter.com]
Options: Reply To This Message•Quote This Message
Re: Charlie Watts Dies at 80
Posted by: TheBluesHadaBaby ()
Date: August 24, 2021 21:34
We've always known a day like this was coming. Now here it is.

And, yep. It hurts as much as feared and expected.

The gentle - to all but drum kits - and modest Charlie is gone.


My deep sympathies to his family.

****
I'm down in Virginia
with your Cousin Lou.

Obviously it was more serious than we thought.

Good memories from over 200 shows!

Charlie gave so much! He was a very nice guy, I've met him a few times. A very big loss! At the moment I don't know much more to say. He was unique!
Thank you Charlie!

I can't imagine the Stones without Charlie Watts!
My Feelings to his Family and his Bandmates!