Goto Thread: Previous•Next
Goto: Forum List•Message List•New Topic•Search•Log In•***Print View
OT: Anyone a Fan of Laura Nyro?
Posted by: tatters ()
Date: July 12, 2021 14:34
Fun Fact #1: On December 6, 1969, the day the Stones played Altamont, three of her songs, recorded by other people (Wedding Bell Blues, And When I Die, and Eli's Coming) were all in the Top 10 of the Billboard singles chart.

Fun Fact #2: She wrote and recorded her own versions of every one of her songs that would ever be a hit for another artist by the time she was 20 years old.

I've always said that one of these days, I'll have to sit down and give a listen to everything she ever did. I'm finally doing that now.
Options: Reply To This Message•Quote This Message
Re: OT: Anyone a Fan of Laura Nyro?
Posted by: Irix ()
Date: July 12, 2021 14:55 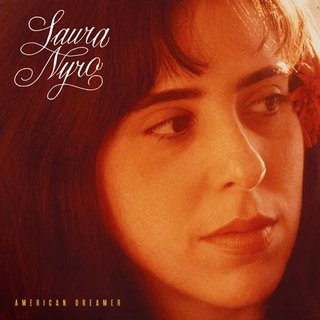 8-LP vinyl box set - [SuperDeluxeEdition.com] .
Options: Reply To This Message•Quote This Message
Re: OT: Anyone a Fan of Laura Nyro?
Posted by: dmay ()
Date: July 12, 2021 17:24
What a gifted artist. Most of us probably know about her, if at all, through the cover versions of her songs. I believe, if I remember right, there's a number of live recordings of her on Dime. Her albums are wonderful discoveries. Here's some links about a cover album of her songs which is a superb album and good intro to her music.

[www.youtube.com]
Options: Reply To This Message•Quote This Message
Re: OT: Anyone a Fan of Laura Nyro?
Posted by: tatters ()
Date: July 12, 2021 17:54
Monterey Pop Festival. June 17, 1967. She went on right after the Byrds and right before Jefferson Airplane. She was nineteen years old.

Quote
KSIE
I saw an interview with Todd Rundgren where he said Laura's "Eli and the Thirteenth Confession" (1968) was an all-time classic. So...I bought it, and it is very good. It reminded me quite a bit of Todd Rundgren's early 70s albums....

Yes, Todd has said that the Eli album was a major influence on his songwriting. Listening to it now, I definitely hear how he incorporated little bits and pieces of Laura's work into his own songs without actually plagiarizing anything. Still, I won't be able to hear Something/Anything? in quite the same way ever again. There's things on that album, certain melodies and chord progressions that I once thought were the mark of a genius, and now I listen to it and I just think, "He got that from Laura!"

Quote
djgab
I have to say that I've never heard her name. What a discovery ! Thanks for sharing. Maybe she is more well known in the US than in Europe ?

I'm sure that's true. Barbra Streisand's cover of "Stoney End" was a minor UK hit in 1971, but other than Babs, I'm not sure anyone in Europe would be familiar with any of the artists who covered Laura's songs. Even the 5th Dimension, a hugely popular act in America, whose unique style of "champagne soul" dominated the US charts from 1967 to 1972 (and who recorded no fewer than eight of Nyro's songs) barely made a dent in the UK charts. Only two minor hits, one of which was Laura's "Wedding Bell Blues."

And Barbra Streisand's hit version from 1971. The best thing Babs has ever done, imo.