In 1975, if you wanted great seats for a show in L.A. you camped out for a few days at the Forum. So when the 1975 tour was announced we were ready. We loaded our cars and got there a few days ahead of the on sale date. Back in the Stone age (pun fully intended), they actually sold the best seats at the ticket windows. Top price was $12.50. All you had to do was be crazy enough to spend a few days and nights at the Forum.

When the big morning came, we were first in line at three ticket windows. And we snagged front row seats for three shows. I'm 95% sure it was opening night, the middle night (L.A. Friday Night!) and closing night. They played five nights in a row back then. Maybe they took drugs.

I was a little confused with one of my sets of tickets. The two seats were in different sections. When I asked why, I was told that these were front row, dead center. Holy shit!

I was determined to sneak my camera in for these shows. Somehow I got my Honeywell Pentax H1a with a big clunky Vivitar 85-205 zoom lens in the building all three nights. Thankfully, they never confiscated my film. Five years ago, I found a few of the slides, made rough digital copies and I posted a couple of them here.

A few days ago, I stumbled upon the mother lode! I found my pix from second row 1972 and all my pix from 1975. (Plus Led Zep, The Who, and others) And with good image transfer equipment, I was able to convert decent quality digital images from my original Ektachrome slides.

Of course, many of the pix were bad for various reasons, but I did get some really good shots. When you check them out, I think you'll agree.

I also did six "then and now" pix with comparisons to some similar pix I took from the pit at the Glendale show last year.

Rather than making this a huge long post, you can see them at this gallery here:

Quote
dmay
Thanks. Nice photos. Isn't this the tour where Mick rode the giant penis and/or swung out over the crowd? It was at the long gone Cap Centre in Largo, Maryland, we saw the show that featured one or both of these events and I believe it was 1975.

I was there at the Forum for three shows...you captured some of the excitement and brought back a lot of memories. 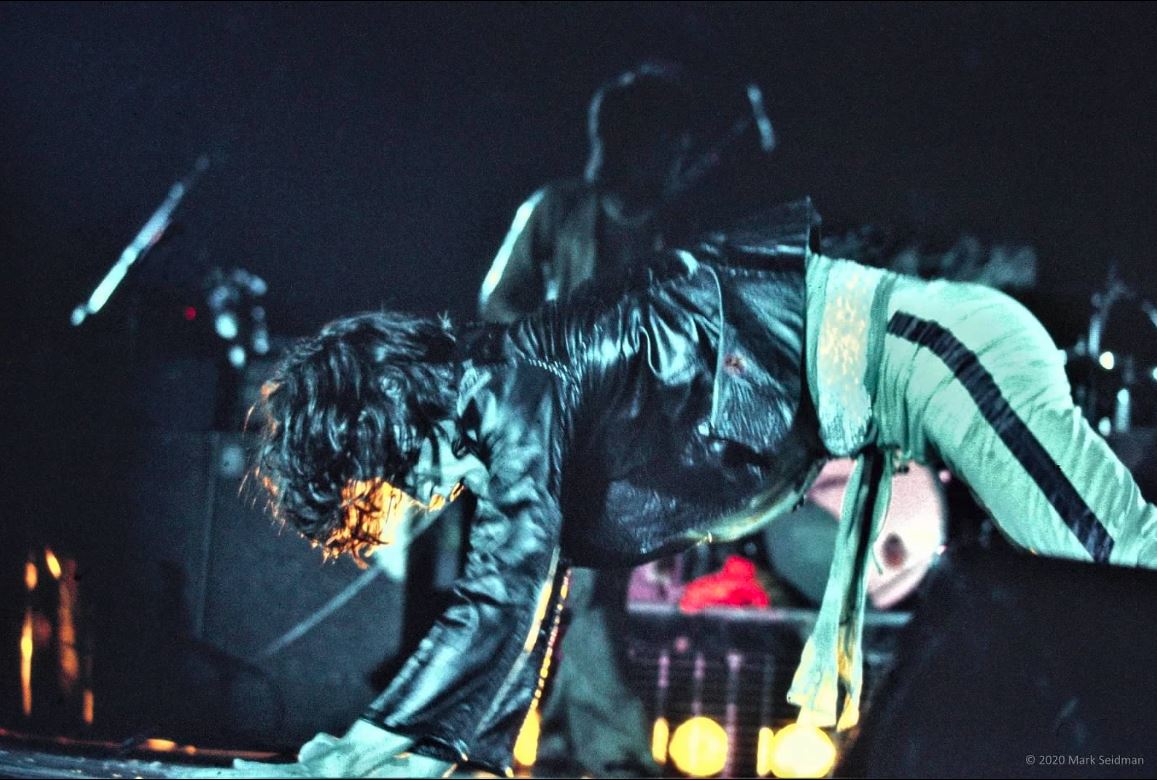 Quote
DaveG
Brilliant pics, and a great story! I spent the night in line at the Forum for the November, 1969 show but sure didn’t get front row.

There wasn't much in the way of security back then. Our seats were in the Collonade (aka, the upper bowl). When the show started, we left our seats and headed for the floor. No one stopped us. I spent the show right in front of Keith's side. No camera for that one. Damn.

The guy who drove me and my friends had to leave. We stayed. Some nice stranger drove me and my friend to West L.A. I got home at 5:30AM. My parents were pissed!!! But that's how it all started for me.
Options: Reply To This Message•Quote This Message
Re: Just found 200 pix from front row LA 1975 - Here are the best 25
Posted by: Honestman ()
Date: August 13, 2020 00:58
Great story and shots, some unique !
I don't recall to have seen any pictures of ladies on stage during HTW for the whole tour 1975

Options: Reply To This Message•Quote This Message
Re: Just found 200 pix from front row LA 1975 - Here are the best 25
Posted by: CaptainCorella ()
Date: August 13, 2020 01:00
The band must have sounded really strange without their Bass player. How did they manage?

Quote
CaptainCorella
The band must have sounded really strange without their Bass player. How did they manage?

I guess someone's got to be a wise guy. Could have been me if it wasn't my post.

Quote
Honestman
Great story and shots, some unique !
I don't recall to have seen any pictures of ladies on stage during HTW for the whole tour 1975