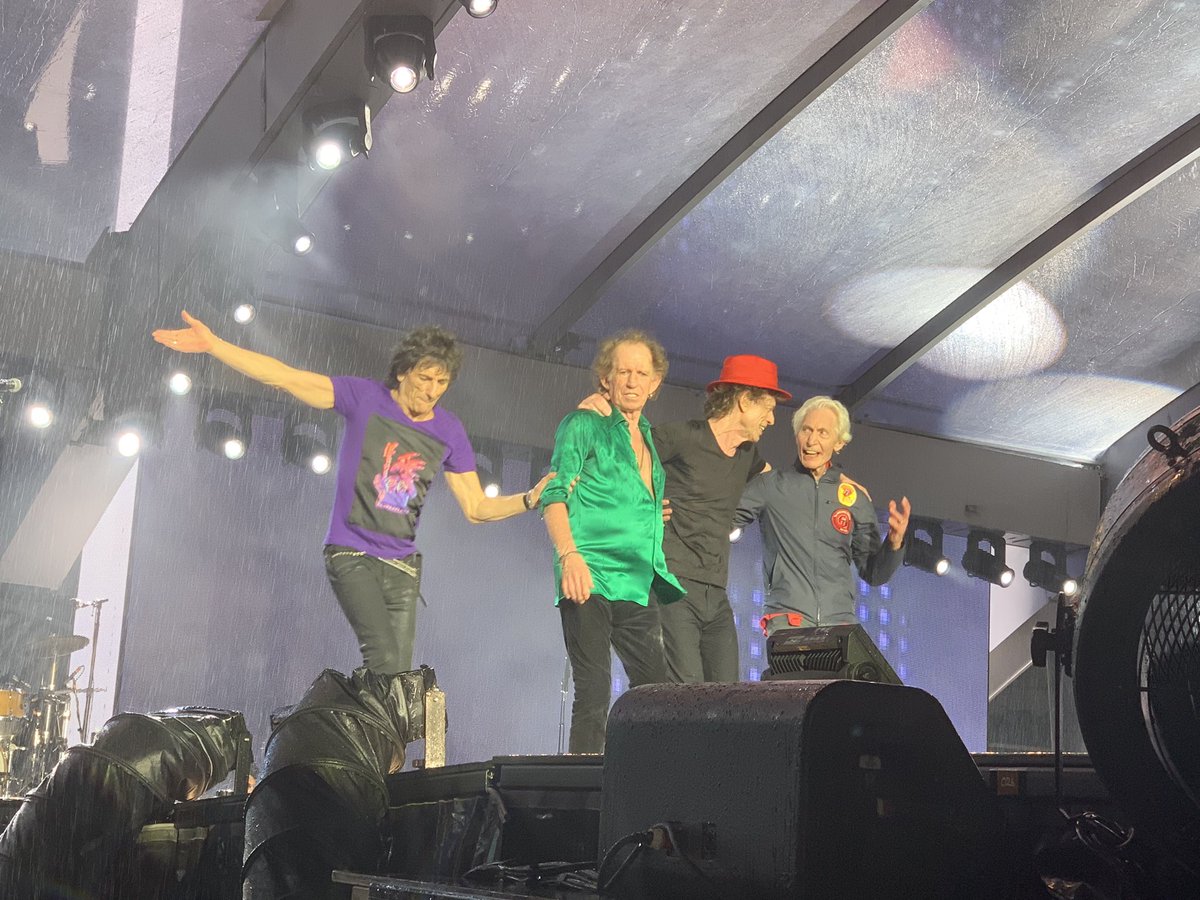 - and bye bye Johnny who will be posting pictures and reviews tomorrow.
Options: Reply To This Message•Quote This Message
Re: Miami show Friday 30-August-2019 live updates - The Rolling Stones No Filter Tour
Posted by: Nikkei ()
Date: August 31, 2019 07:19

Charlie just got word about the next tour
Options: Reply To This Message•Quote This Message
Re: Miami show Friday 30-August-2019 live updates - The Rolling Stones No Filter Tour
Posted by: dimrstone ()
Date: August 31, 2019 07:22
Foxy made it to the show! Got to see everything after the B Stage!
That's a great ending,
Till the next time

Quote
waterrats
Must be kinda strange for Mick singing the lyrics of UMT today ...

But he doesn't. Lyrics were re-written before the 2017 euro-tour

Quote
elmuseo
The Tour is Over
Thanks to all the people involved (periscopers, facebookers, instagramers etc)
and specially to Green Lady and Waterrats for to be every night looking for links
Long Live Rock´n´Roll

"Thank you Miami for sticking with us and making the most of the situation! Stay safe everyone. And huge thank you to each and everyone of you who have joined us on this tour, we had the best time! Till the next time we say goodbye...." 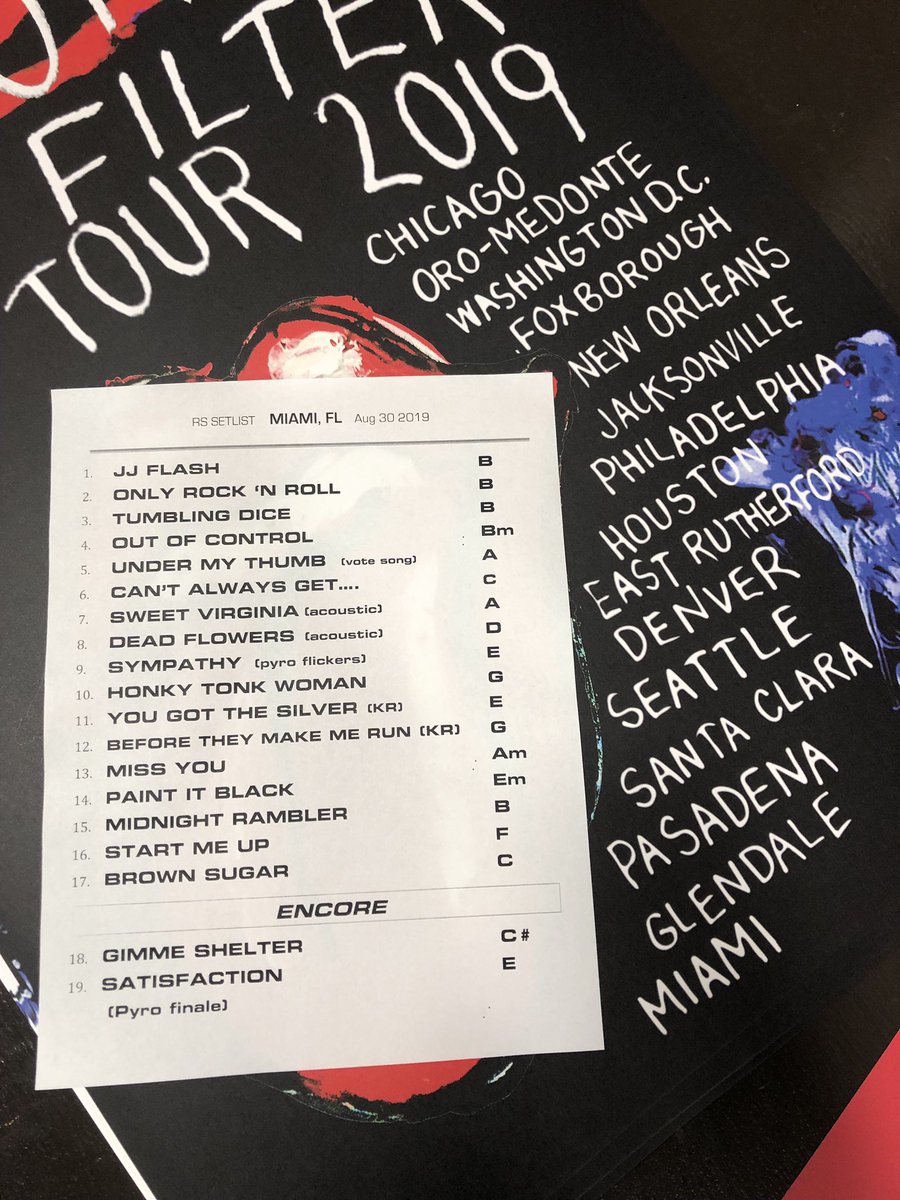 [Twitter.com] · [www.Facebook.com] · [www.Instagram.com] · Large version
Options: Reply To This Message•Quote This Message
Re: Miami show Friday 30-August-2019 live updates - The Rolling Stones No Filter Tour
Posted by: GJB ()
Date: August 31, 2019 12:48
Just watched some clips on YouTube - it seems like Mick was treating the gig like a South American show given that a lot of people were coming to Miami from there - for instance: asking them to do the “ohhh oh ohhh” part at the start of Out of Control, singing the riff line of satisfaction (something that caught on a lot during the Argentina shows), maybe even this played a part in the return of its only rock n roll.

Satisfaction - as some mentioned has a messy couple of minutes during the middle but hey, it just adds to the fun!

Anyway, been following this tour online with the UK and very much looking forward to No Filter Part 4 wherever and whenever that may arise! I am hoping South America but let’s see...

Regardless - let the Stones roll on as long as they wish! Amazing!
Options: Reply To This Message•Quote This Message
Re: Miami show Friday 30-August-2019 live updates - The Rolling Stones No Filter Tour
Posted by: Nikkei ()
Date: August 31, 2019 12:53

Quote
rollingloc
Nothing special showing it would be the last time?

Rumour has it that Chuck Leavell was rushed off in an ER
Options: Reply To This Message•Quote This Message
The Rolling Stones - Miami FL 30-August-2019
Posted by: bye bye johnny ()
Date: August 31, 2019 15:33
Rolling Stones reign as it pours at Hard Rock Stadium This actually happened at the Rolling Stones concert Friday night at Hard Rock Stadium. In front of more than 60,000 witnesses. Who still may have trouble convincing friends that it went down like this. But it happened.

Near the end of the Stones’ long-awaited, twice-rescheduled show — in front of a storm-rattled South Florida audience seeking escape from the helpless frustration of watching the approach of Hurricane Dorian — vocalist Mick Jagger delivered the opening line to the band’s classic howl-at-the-heavens allegory “Gimme Shelter.”

“Oh, a storm is threatening, my very life today,” Jagger sang. And with that, on cue, rain began to fall, first in individual pellets, then in driving sheets.

This was an encore song, at the end of the final concert of the band’s No Filter Tour, and there may have been some temptation for them to bow to the weather and end the show right there. But the Stones, who also resisted the idea of canceling the concert altogether this week in the face of Dorian, played on.

When backup vocalist Sasha Allen marched out into the audience on a slick catwalk stage to deliver the searing solo on “Gimme Shelter,” Jagger followed right behind her, dancing and singing “the floods is threatening,” as the sky emptied onto them.

It was a thrilling thing to watch Jagger, a superstar, a septuagenarian (he’s 76), figuratively shake a defiant fist at the storm. It also was great show business, especially for an audience this particular week in South Florida.

It is probably too much to consider that Jagger summoned some higher power to arrange this perfectly timed precipitation. But it was magical.

There are Rolling Stones fans who no longer attend shows for fear of destroying the hermetically sealed memory of their favorite concert by the band. Again on Friday night, Jagger & Co. proved that is a mistake.

More than 50 years after their first U.S. tour, the Rolling Stones remain a great rock ‘n’ roll band with a rich and culturally resonant discography, which got a full workout at Hard Rock Stadium in a concert delayed more than four months after Jagger’s heart surgery.

Still the slightly waifish rogue, Jagger arrived in black shirt over a cropped black T-shirt and pants, layered with a series of sparkly jackets possibly borrowed from a Korean boy band. A spry and athletic presence throughout the concert, Jagger left no confusion about why the phrase “moves like Jagger” became a thing.

Guitarist Keith Richards, his face evolving into a Matt Groening caricature and hairline in full retreat, remains a stirring blues-guitar force and an affable stage presence. Drummer Charlie Watts is still a machine, every so often displaying a bemused smile. Ronnie Wood, somehow, is still the kid. Also on board for the tour are bassist Darryl Jones and Chuck Leavell on keyboards.

Opening after a one-hour rain delay with “Jumpin’ Jack Flash,” the Stones delivered more than two hours of audience favorites and a few rarities in front of a sell-out crowd, which seemed to include the band’s entire Argentina fan club. (While the move of the concert from Saturday to Friday due to Dorian must have inconvenienced many ticketholders, all seats seemed to have been filled.)

With Richards and Wood chatting and smiling and Jagger the eager ringmaster, the set list included vintage hits such as “Paint It Black,” “Under My Thumb” and “Satisfaction,” all of which once struck fear in the heart of parents. The kids of those parents now bring their own daughters and sons to Rolling Stones concerts.

Big moments came with a nearly 8-minute version of “Midnight Rambler,” energized by Jagger’s lethal harmonica and a fiery Richards-Wood duel; a rollicking version of “Brown Sugar” that featured Denson’s muscular sax; and brassy take on the disco hit “Miss You,” which inspired not so much a sing-along but a doo-doo-doo-doo-along.

Jagger stalked the snaky rhythms of “Sympathy for the Devil” with swiveling hips and dark menace. “Honky Tonk Women” was a showcase for Richards’ intense stroking. Richards the vocalist was allowed to shine on the under-appreciated “Before They Make Me Run” and the 50-year-old “You Got the Silver.”

Several acoustic songs were among the most well-received, including “You Can’t Always Get What You Want,” which became a gorgeous gospel revival, with Jagger and Allen trading soulful vocals as Wood crushed a solo; as well as the rollicking “Sweet Virginia” and the country-tinged clapback “Dead Flowers.”

Another enduring memory from this show: It had the longest lines for merchandise that I’ve ever seen, before and during the concert. One fan, Patty Serba, of Davie, said she thought her T-shirt might be a piece of history.

“Who knows, they may never come back,” she said.

For what it’s worth, before the band walked off the stage after playing “Brown Sugar,” Jagger told the audience: “Good night! See you next time!”

We’re gonna hold him to it.

He actually said something like "my hair will get wet"!!
Options: Reply To This Message•Quote This Message
Re: Miami show Friday 30-August-2019 live updates - The Rolling Stones No Filter Tour
Posted by: Straycat13 ()
Date: August 31, 2019 15:58

Was Miami the last time? I don't know, nobody does: