Quote
Hairball
Well when you say "some of their most devout critics are posting direct links" how else am I supposed to respond?
I did say it was nice of them to donate 10% to the cause (maybe you missed that part?), but am also wondering how much they'll pocket while they're at it.
If you consider that rude and/or whining, I guess you can't be helped and there's no point in discussing it with you further.
Be sure to donate to the cause, even if you have to fill the Stones pockets while you're at it - it's a great cause.

Perhaps I'm being a bit thick, but why would the Stones pocket any dosh from this project?
As far as I can see only Ronnie would expect (but he may waive) any income...due to his art work.

Not sure, and that's why I was asking. They lend their names to it, and it's being sold on their website, so wondering how much (if any), of the other 90% of the proceeds will go to them.

How much was this in 2011?
Options: Reply To This Message•Quote This Message
Re: Confessin’ The Blues – In Collaboration With The Rolling Stones
Posted by: Rockman ()
Date: August 6, 2018 14:01
Koschi ….
It was a fairly hefty price but honestly cant remember
exactly … somewhere like US$250-300 + shipping …..

Funny thing was when I ordering it I corresponded with them at least three-four times asking for No5 of the sets.....
They kept replying that no no we cant send you No5 .. we cant do that you just have to take the one we send.....

But as you can see they sent No4 …… Surely for those kinda $$$bucks
they coulda got on the mega-phone to the ware-house and screeeemed out…
"Hey Chuck can ya send No5 to Australia to get this annoyin' Aussie prick offa our backs ….hhhaaaaaaaaaa

Quote
vertigojoe
Love the fact they’ve gone for 10 inch vinyl..
was actually quite surprised it’s only £60 on the Stones store. That’ll usually get you a poster and an official pencil sharpener on there

Hadn't thought about it like that, and makes it seem much more desirable when you compare it to a poster and a pencil sharpener.
I have a feeling not many people will buy the vinyl bookpack (those who already have everything, those who don't play vinyl, etc), so maybe it will end up being discounted eventually.

I bought that one as well 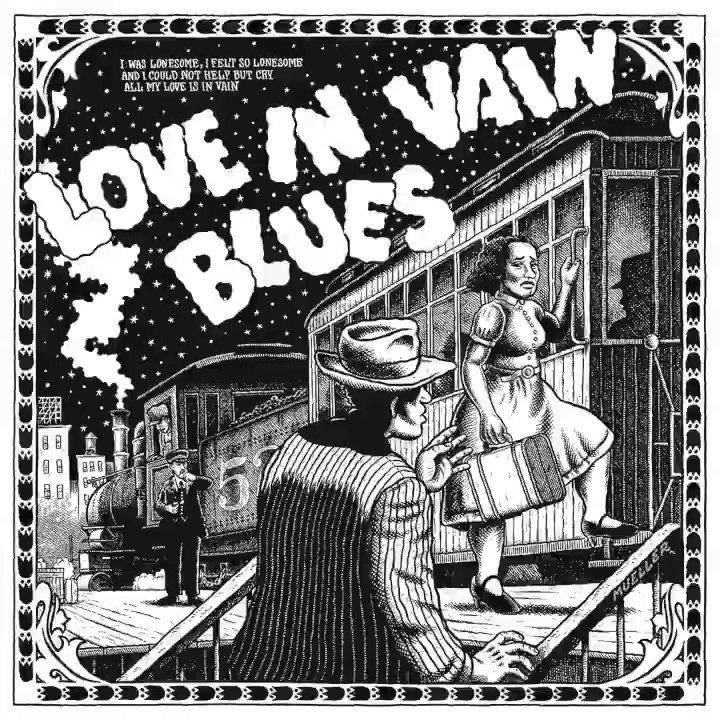 Most of you know the Stones version but the original is from Robert Johnson & featured on the compilation Confessin’ The Blues - Noted blues illustrator Christoph Mueller created this art print which is available as part of the 5x10” book pack. Order now: [bmg.lnk.to]

[twitter.com]
Options: Reply To This Message•Quote This Message
Re: Confessin’ The Blues – In Collaboration With The Rolling Stones
Posted by: Rockman ()
Date: September 2, 2018 07:19

Ronnie trawls through his memories for anecdotes about blues legend mates like Muddy Waters and Chuck Berry, whose songs feature in the album

[www.thesun.co.uk]
Options: Reply To This Message•Quote This Message
Re: Confessin’ The Blues – In Collaboration With The Rolling Stones
Posted by: Rockman ()
Date: October 13, 2018 01:02

ROCKMAN
Options: Reply To This Message•Quote This Message
Re: Confessin’ The Blues – In Collaboration With The Rolling Stones
Posted by: angee ()
Date: October 16, 2018 03:06
[ur[quote=Rockman]

Also brilliantly covered by the Doors? "Back Door Man."

My ‘Confession The Blues’ should be here Nov. 9th

Options: Reply To This Message•Quote This Message
Re: Confessin’ The Blues – In Collaboration With The Rolling Stones
Posted by: Rockman ()
Date: October 31, 2018 07:59
Is there any footage of Ronnie speaking at the Confessin' launch ???????

ROCKMAN
Options: Reply To This Message•Quote This Message
Re: Confessin’ The Blues – In Collaboration With The Rolling Stones
Posted by: ouroux58 ()
Date: October 31, 2018 10:28
As usual a better price at:
[musique.fnac.com] 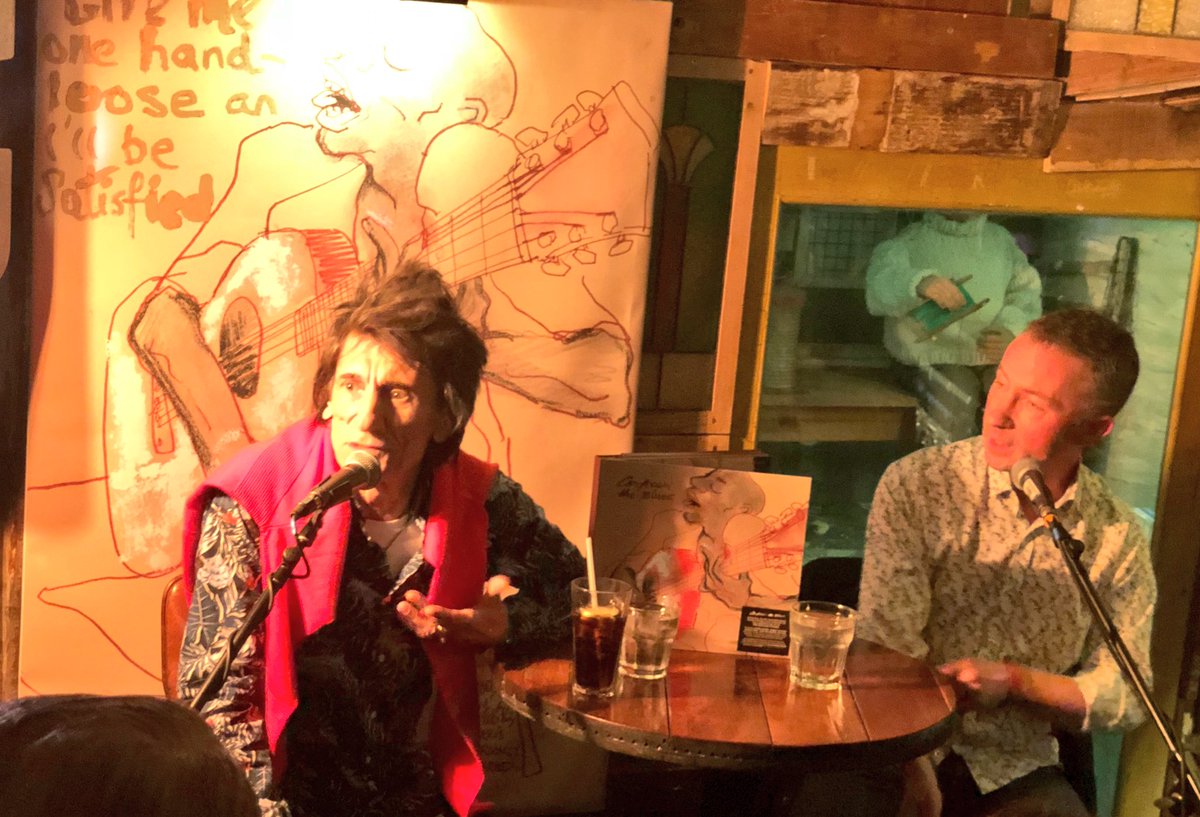 Share On Flipboard
At a launch event for the Confessin’ The Blues compilation, held in the speakeasy-style Maggie’s Bar in east London, on the evening of Tuesday, 30 October, Ronnie Wood revealed why he and The Rolling Stones put together a collection of what they believe to be the most important blues recordings in history.

Speaking to Paul Sexton, Wood noted the debt the Stones owe to the original blues masters, saying, “It’s a part of our education and part of our history.” Calling Confessin’ The Blues “a companion” to Blue & Lonesome, the 2015 album that found the Stones paying homage to the greats that inspired them, Wood said that curating the tracklist also gave the band an opportunity to shine a light on some of the more obscure musicians in the history of the music.

“It’s a mind-boggling collection of blues artists,” Wood said, adding, “What Mick, Keith and Charlie know between them is all you need to know.”

Speaking of the band’s choices, which range from Jimmy Reed to Little Walter, BB King and Bill Big Broonzy, Ronnie acknowledged the influence of some of the lesser-known artists who have inspired them. “I think it’s great that Mick and Keith picked unknown people like Amos Milburn,” he said, adding that the pianist was a relatively obscure figure compared to the likes of Muddy Waters and Howlin’ Wolf.

Recalling the British blues boom of the 60s, during which the Stones put their own twist on the music, leading the British Invasion and introducing a whole new generation to the artists that now appear on Confessin’ The Blues, Ronnie revealed how hard it was to come by the original recordings.

“It was all record collectors and enthusiasts,” he said of the aficionados who sought the music out. “They were a rare breed. The records were like gold dust. You could never get hold of them. I didn’t see a picture of Chuck Berry for years, and Howlin’ Wolf – you had no idea what he looked like. Putting a face to the name took many, many years.”

It was through his brother Art, who brought records such as Howlin’ Wolf’s ‘Smokestack Lightnin’’ and Muddy Waters’ ‘Little Brown Bird’ home, that Ronne initially got into the blues; after listening to Art’s collection, the music started “cooking underneath” the jazz influence of his other brother, Ted.

“I was fortune enough that Art backed Howlin’ Wolf when he came to London. And backed Little Walter when he was on tour,” Ronnie said. It would be years before he met the original blues icons himself, but he revelled in his older brother’s stories – even if Art was worried that tales of the blues legends might have the wrong kind of effect.

“They had to clean it up a lot for little Ronnie,” he laughed. “They didn’t want him too badly influenced.”